I've never thought I'd be a hostess for an event - no reason why... maybe I thought no one will participate in the event I host? Haha what a weird me I know. But being a hostess for this Choux Party has really motivated me to plan ahead what I want to bake for the party and I'm really excited to see what you guys have to contribute to the party! But... I stopped at double - purely because I was too lazy to whip up the ganache, haha! They are a decadent and chocolatey treat and I extra love them when they are eaten straight from the refrigerator - cold and chocolatey!

Step-by-step photos have already been covered previously (click HERE for choux; click HERE for pastry cream), so I won't be showing them again here so as not to bore you guys 😉

I'm submitting this recipe to Aspiring Bakers #34: Choux Party - hosted by me! The roundup for this event will be held on 1 September 2013!

In addition, I'm also submitting this to Little Thumbs Up, organised by Doreen from my little favourite DIY and Zoe from Bake for Happy Kids. This month's theme is Egg and is hosted by Yen from Eat Your Heart Out. Do check out HERE for the submissions for this event! 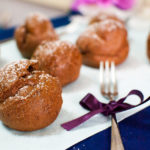