This is a fuss-free, simple and healthy (uses no MSG!) dish that I loved to cook for a quick lunch fix or during a cold day when some soupy food is desired. The original recipe comes from my mom - she loves to use all kinds of leftover vegetables in this dish and it's an incredibly homey and comfort food for us all. The soup base is cooked using onions and dried anchovies (popularly known as ikan bilis in Asia) but chicken stock can be substituted for the soup. All kinds of vegetables can be used - cabbage, sugar snap peas, carrot, mushrooms, corn etc, just use whatever is leftover in the fridge! Ee Mein is a type of Asian noodle made with eggs and wheat flour. It is golden in colour (due to the eggs) and has a chewy texture (due to soda water being used in making the noodles). The noodles are bundled into a patty-like shape then deep-fried till crispy and dried. It can be cooked in various ways - soup, stir-fried and braised.

Ikan bilis are actually dried anchovies in Malay. It is widely used in many Asian dishes. My mom will often pan-fry the larger ikan bilis till crispy and serve it as garnish on top of vegetables (imagine eating vegetables with an extra crunch!).
It is a great source of protein, though it's pretty salty. I'm going to link this dish to Recipe Box #13 hosted by Chaya! 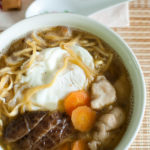