I think I've said this before, but my friend bought some Vietnamese coffee for me a couple of months back and after baking this cake, I still have some left in my pantry. Since I don't really drink coffee (but I'm mad over coffee baked goods, weird I know), I decided to use them to make a batch of cupcakes.

I've been baking with so many oil-based cakes lately that I've not touched my electric mixer for quite some time! (Most of the time my oil-based cakes are made using just a whisk a wooden spoon) It feels good to hear the mixer making noise again, creaming the butter, sugar, eggs and flour together into a lovely creaminess. My friend got me instant Vietnamese coffee powder, which worked really well in these cupcakes as the coffee flavour is really intense. The cupcakes are denser (but not too overly heavy) and a lot richer than those oil-based cakes. They are soft and not too crumbly, with the strong coffee taste oozing with each and every bite. Buttercream frostings are never really my favourite as I've always found that they need a lot of icing sugar in order to get a nice piping consistency, which often led to the frosting to be too sweet to swallow. I thought that with the addition of coffee, the sweetness will be toned down, but that's not really the case. Luckily the cake wasn't very sweet so the two still complemented each other pretty well. I guess I'll stick to my flour frosting the next time. Such a perfect treat for afternoon tea! One of butter's best friend - sugar!

The other best friend is
my tummy. Add in one egg. And then the second one.

(This is what happens when I tried to crack the egg with one hand - terrible fail.) Alternate the flour mixture with the coffee mixture. Slowly drizzle it in... mmm! They'll go into the cupcake liners.

The extras will go into my belly which will be reflected in my tummy. They're kind of "hole-y" but it's okay, we're going to cover them up with some frosting. Mocha frosting, to be exact!

Cream butter, icing sugar, cocoa powder and some coffee until light and fluffy. 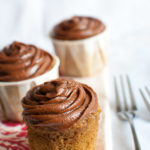