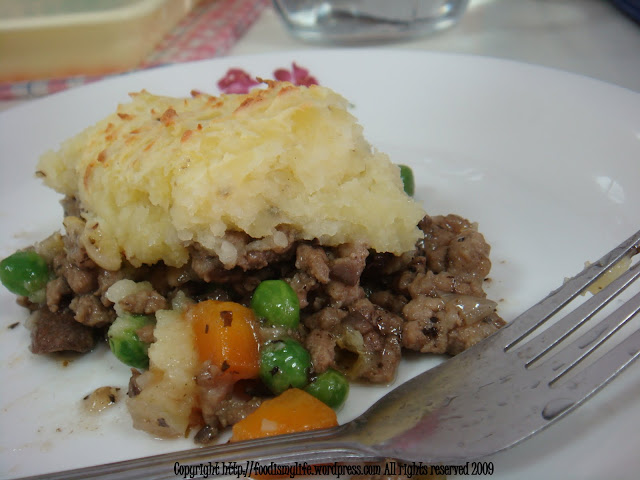 Down with a cough and flu, I have not really been cooking or baking as I just can’t smell or taste anything. It’s been two weeks already and I have not yet recovered. As the year is drawing to a close, this means that the holidays are ending. And this also means that I’m gonna be back in school and there will be limited time for me to bake or cook. So I should be cooking/baking more but I can’t because of my lack of smell and taste at the moment. Urggghh.

In any case, I am also lacking thoughts these days so I guess I shall not bore any of you with my oh-so-not-interesting-story and get on with the recipe.

Remember I told you in the previous post that I made a shepherd’s pie? I made a mistake. Apparently it’s not called a shepherd’s pie when it’s made with beef. It should be called a cottage pie. Sorry, my mistake!

Cottage pie… well, it’s similar to a shepherd’s pie, but it is made of minced beef instead of other kinds of minced meat. I think this dish can serve three to four people but when I made it, my brother and I are too famished and we gobbled them all up once it’s out of the oven. Never mess with potato and beef-lovers!

Making a cottage pie is similar to shepherd’s pie, just that instead of using minced lamb, pork or chicken, use minced beef! I’ve blogged about it before so I shall spare the talking and on to the photos! 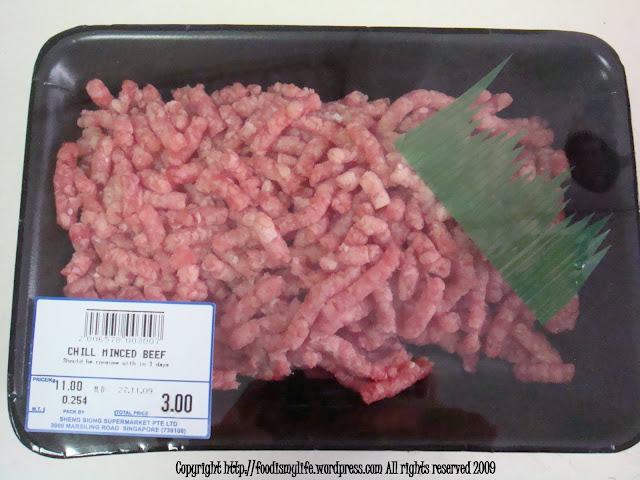 First you’ll need some beef. I got around 250 grams of minced beef. 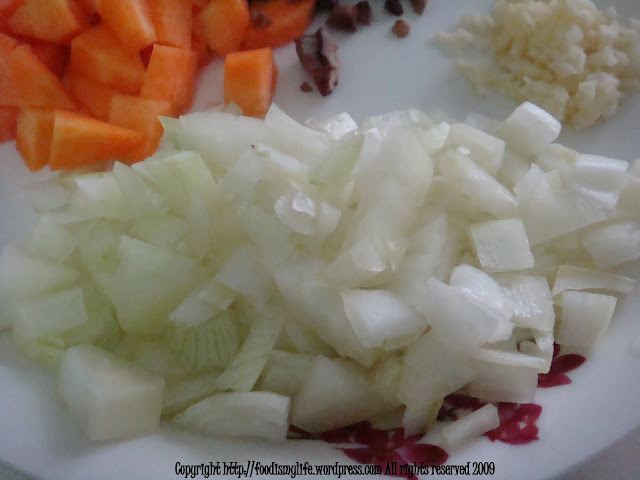 Chop some white onion up. A small or half a medium one will do. 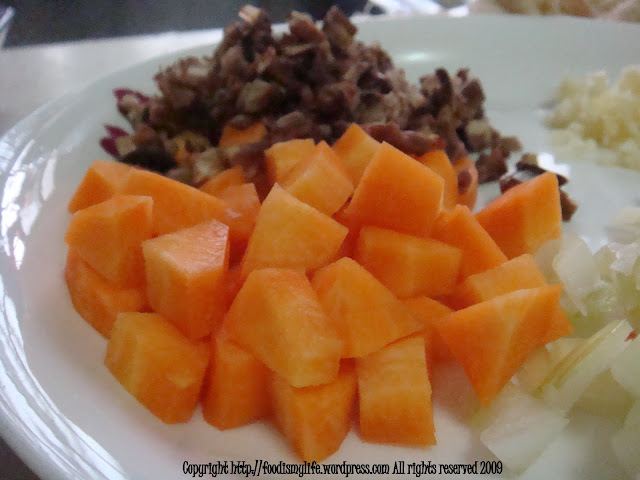 A-third to half a carrot 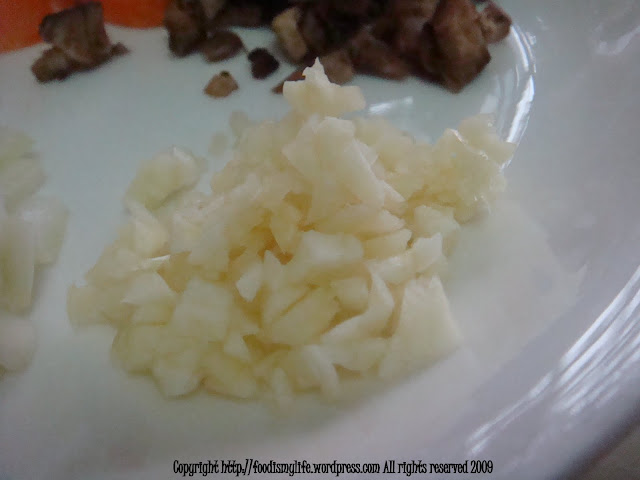 Two to three cloves of garlic 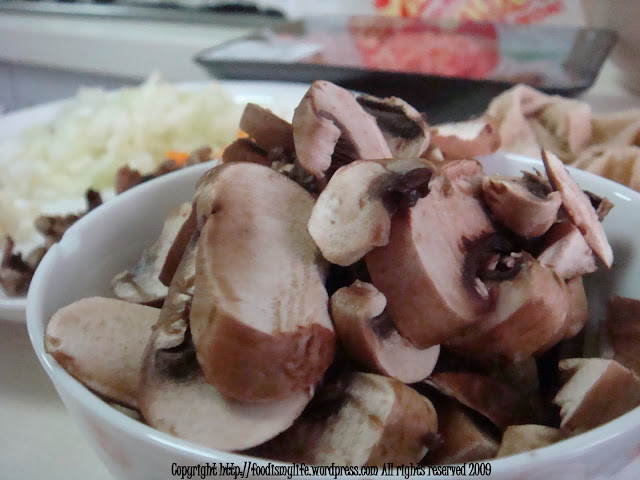 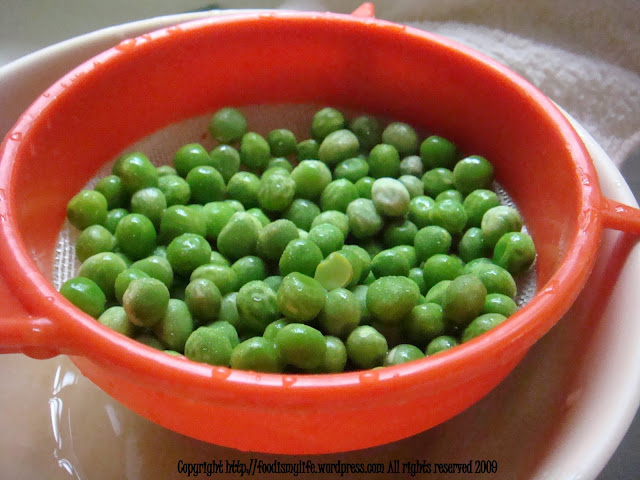 Some frozen peas (I have the habit of washing everything before I start cooking, can’t change that) 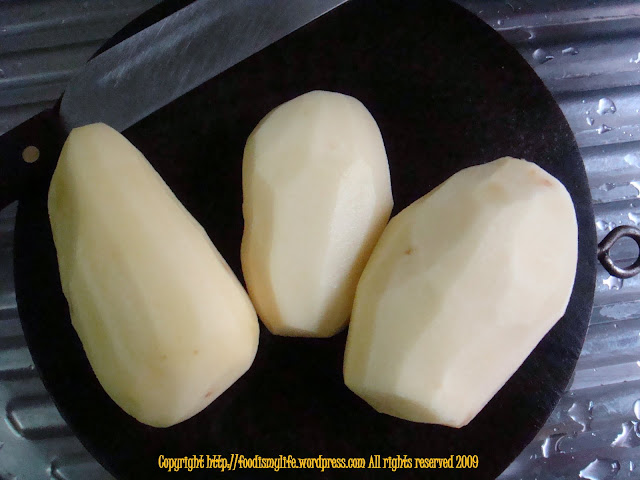 Grab a couple of potatoes. I would have used up to 4 potatoes, but these are the only potatoes left in the house… so… deal with it!

I still survive, so I guess it didn’t really matter. 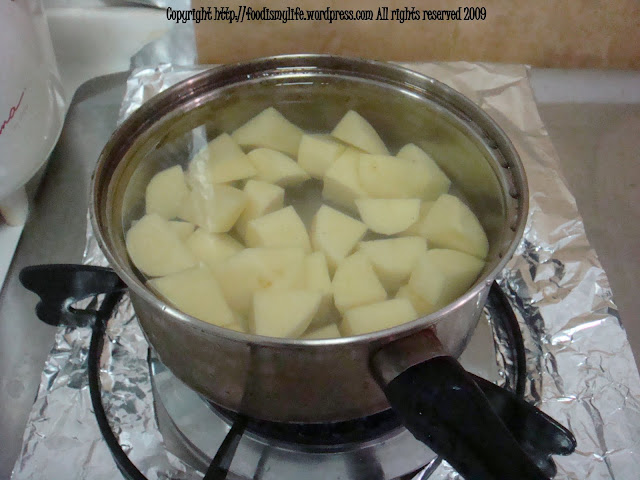 Place the potatoes in a pot of salted water and boil them until they are soft. 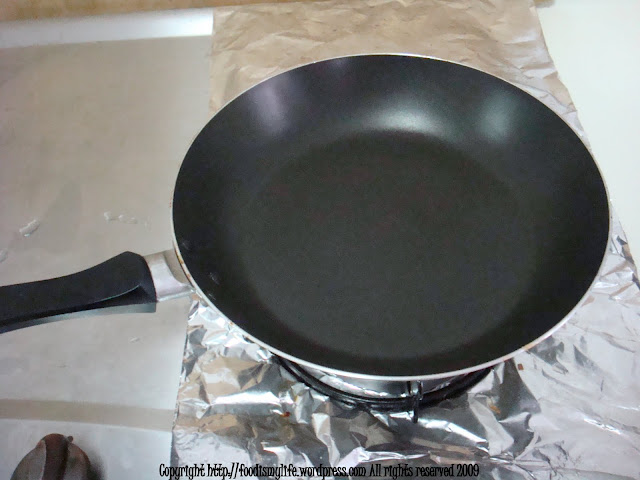 Grab a non-stick pan. I guess it doesn’t really matter if it’s non-stick or non-non-stick. A pan will do. 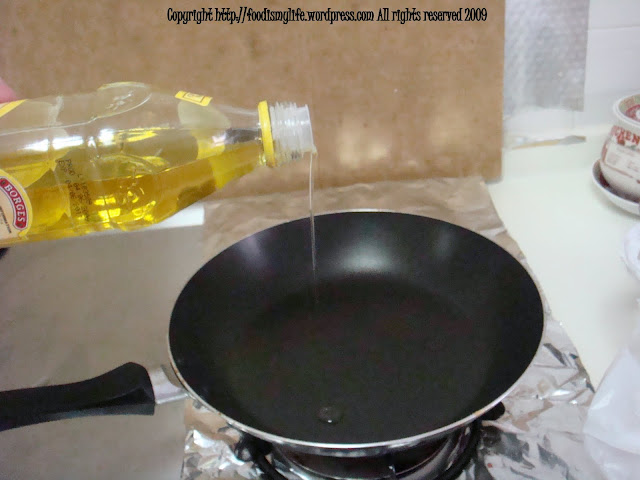 A couple of tablespoonful of oil. Two to three tablespoons will do. Not too much! 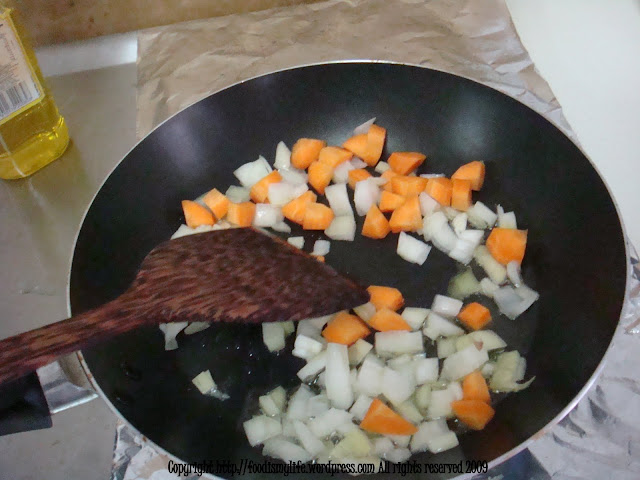 Get the carrots and the onion in. Carrot is a tough vegetable to cook so I always throw it in first. 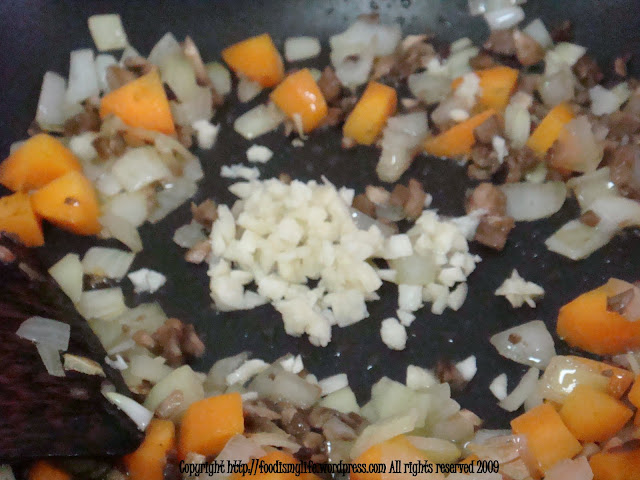 Add the garlic (it’s perfectly fine to omit it too, if you don’t like it) 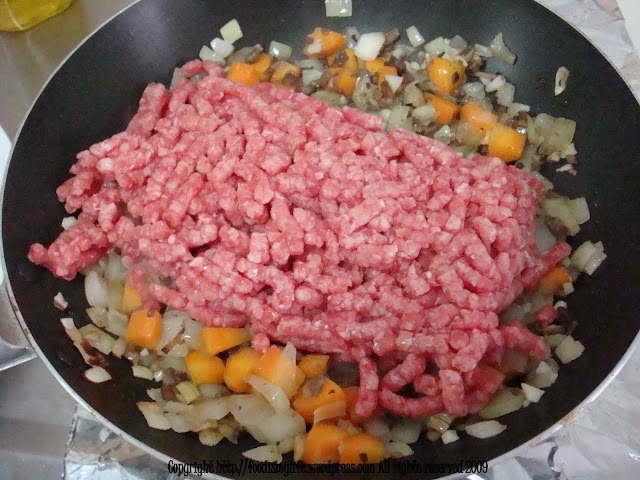 Get the minced beef in it. See how the pan is a little bit too small to fit everything in? 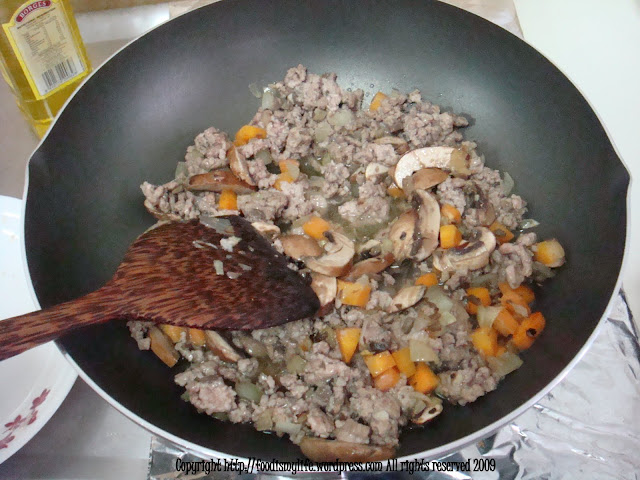 It’s okay, grab a bigger pan. Then, transfer everything from the smaller pan into this bigger pan.

I know, I’m bad at estimates. 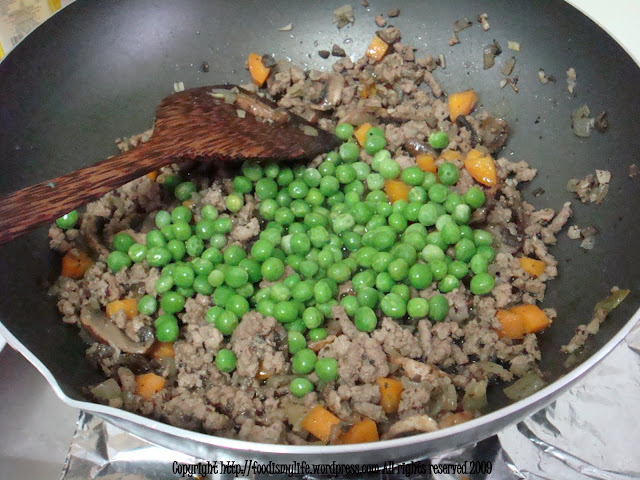 Once the beef is cooked, toss in the peas.

I love the colour. 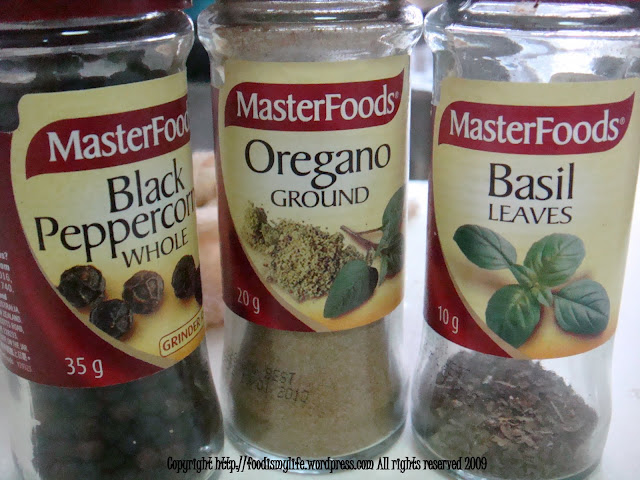 Next I grabbed any seasoning that I feel like it. I chose some black pepper, some oregano and some basil.

Oh, and I added in some light soy sauce in it too. 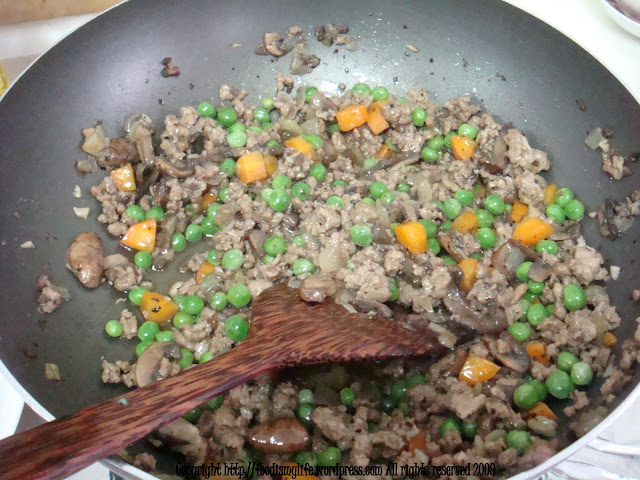 Cook until the mixture is moist, not too wet, and not too dry.

If it’s too dry, add some water or beef stock or any other stock that you have to moisten the mixture up. 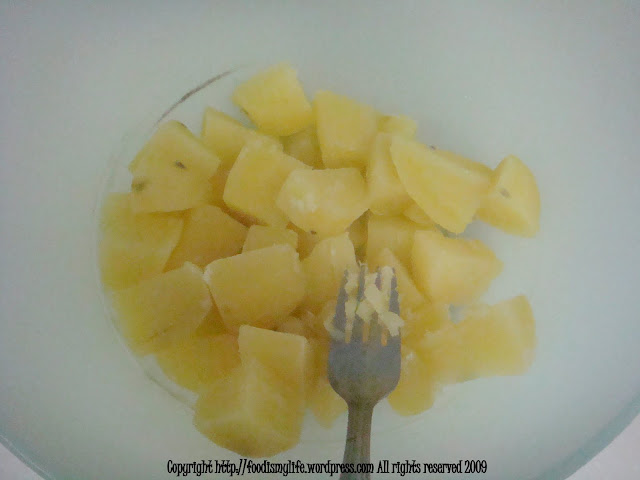 By now the potatoes should be cooked. Transfer them into a bowl, and start mashing. 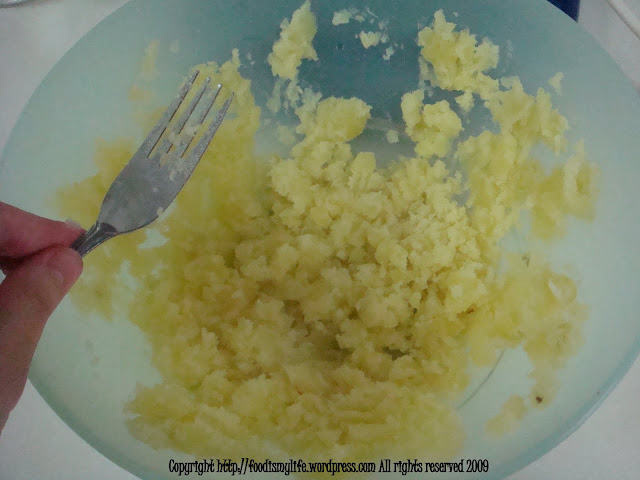 Add some salt, pepper and milk to taste. You are almost there! 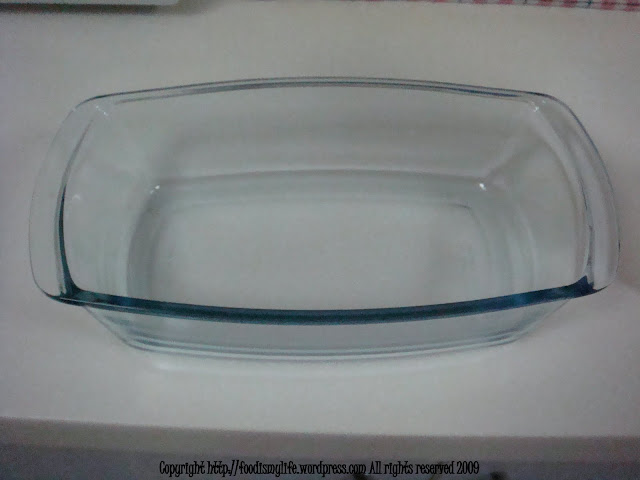 Grab a deep pie dish. I love this new dish that I bought.

It’s made of glass, it’s pretty, and it’s classy. 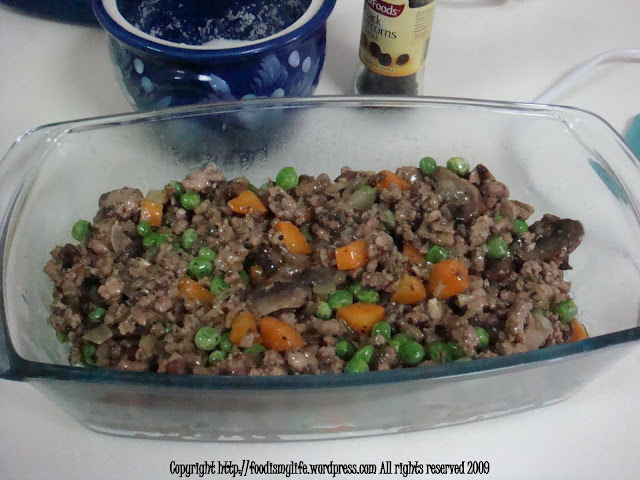 Transfer the meat mixture into the pie dish. 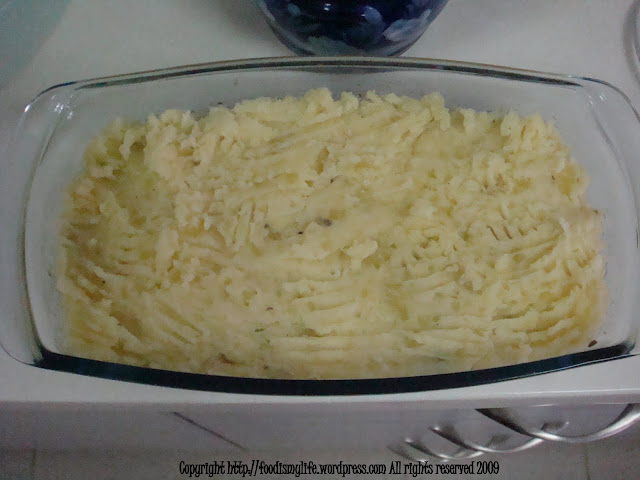 And top it with the mashed potatoes. I don’t really know what’s called “roughen the edges” but seriously, I don’t think it really matters.

It will come out beautiful and golden. 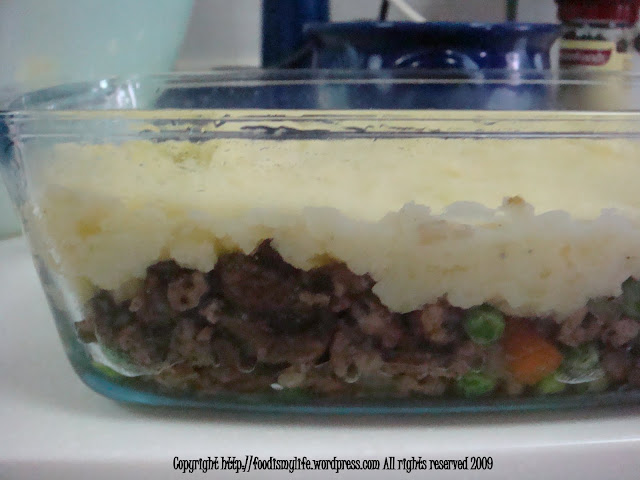 I didn’t add cheese because I’m too lazy to grate. So I just pop it into a 190 degrees Celsius oven for about 15 to 20 minutes. 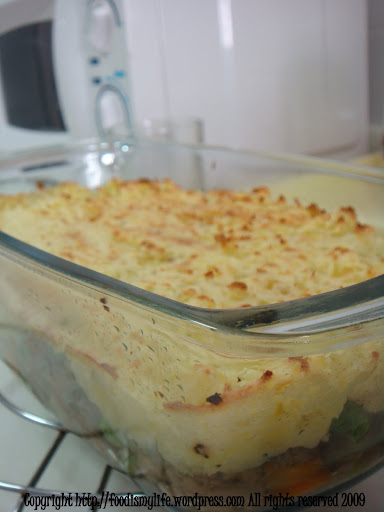 Until the top is golden brown. And the smell. Oh, the smell!

Scoop, and serve. I’m too famished to take more photos so this is the only one that I’ve got.