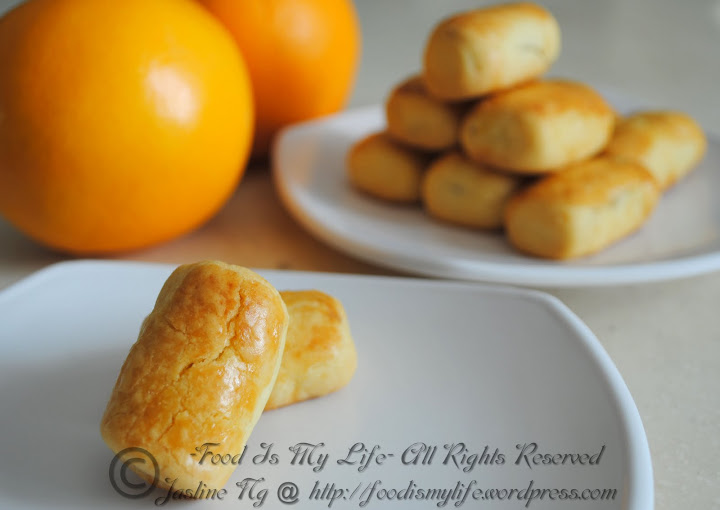 Nearing the festival, people will spend lots of money purchasing Chinese New Year decoration (just like Christmas!), new year goodies and new clothes. Houses will also be cleaned to clean away all the bad luck. On the eve of Chinese New Year, families will gather together for a reunion dinner. In the past, my cousins and I will play with firecrackers all through the night! However, the government has put a ban on firecrackers due to fire hazards and injuries arising due to the misuse of firecrackers.

Over the next few days, families will visit their relatives and friends. Red packets containing money will be given out by married couples or the elderly to the unmarried juniors. Sometimes, families will invite the lion dance group to perform lion dance in their houses. It is performed to scare away the evil spirits and attract fortune and good luck.

What I love about Chinese New Year is undoubtedly the food! During this period, we will eat many fantastic goodies that often symbolises wealth and happiness. One of the most popular (and my favourite) new year goodies is pineapple tarts. In Hokkien (dialect), pineapple is "Ong Lai", which sounds similar to the auspicious phrase "arrival of prosperity".

As for the pastry, I searched high and low and finally settled on the one from Fresh from the Oven, since a few food bloggers have tried out this same recipe and found it good.

The resulting tarts were pretty not bad, considering the fact that it was my first try. d: One thing that I can improve upon is that the crust does not fully have the melt-in-the-mouth texture. It's already pretty crumbly, but I think it needs to be more... melt-in-the-mouth. (: I'm going to make a second and bigger batch next week for the upcoming Chinese New Year, so I hope they will turn out even better! (:

I'm going to submit this post to Aspiring Bakers #3: My Favourite CNY Cookie (Jan 2011). It's so exciting to read about others' favourite Chinese New Year cookies! (: 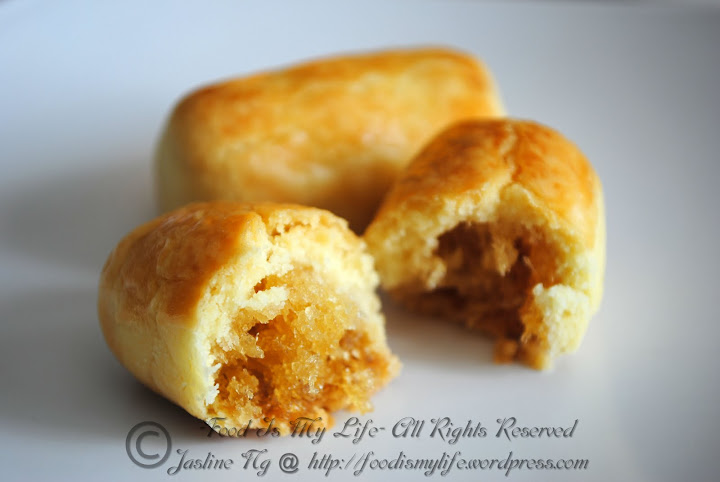 Pineapple Tarts (makes 33)
adapted from Fresh from the Oven

Roll the pineapple filling into small little balls - ½ teaspoon or approximately 6g for each ball. Set them aside.

Sift the flour, corn starch, salt and icing sugar in a bowl.

In another bowl, beat the butter using an electric mixer until the butter is fluffy and light in colour. Beat in the vanilla extract if using. Gradually beat in the egg yolk until fully combined.

Fold in the flour mixture until the mixture forms a dough. Do not over-mix. Wrap the dough in clingfilm and refrigerate for 30 minutes.

Preheat the oven to 180 degrees Celsius. Lay a baking sheet with baking parchment. Combine ½ egg yolk with ½ tablespoon water in a small bowl to make the egg wash.

Divide the dough - 1 heaping teaspoon or approximately 10g each - and roll them into rounds. Flatten the round and wrap the pineapple filling inside. Shape it into a small log. Lay the pineapple tarts on the baking sheet and brush it with a layer of egg wash.

Bake the tarts for 15 minutes, brush it again with a second layer of egg wash and continue baking for another 5 minutes until the top is golden brown in colour.

Let the tarts cool completely before packing them into containers.

Some points to note!