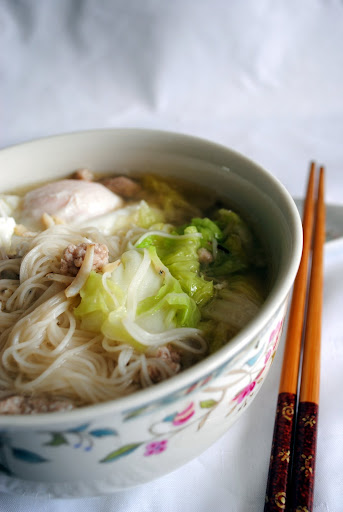 Mee Sua is a type of Chinese noodles made from wheat flour. It is very thin and brittle, but it’s an important food during Chinese festivals/banquets. This is because Mee Sua is also known as “Longevity Noodles”, hence many Chinese eat Mee Sua on their birthdays.

So far, I know there are two ways to cook Mee Sua: soup, or fried. I love both versions, however I only know how to cook the soup version… have yet to learn the fried version… :p

Mee Sua Soup is an extremely easy dish and my mom used to cook it almost every Saturday. It’s healthy and refreshing, with lots of ingredients and no artificial seasoning or MSG at all.

There are various ways to cook Mee Sua Soup: you can use any ingredients you have on hand to make this healthy dish. The recipe that I’m about to post is my mom’s version. 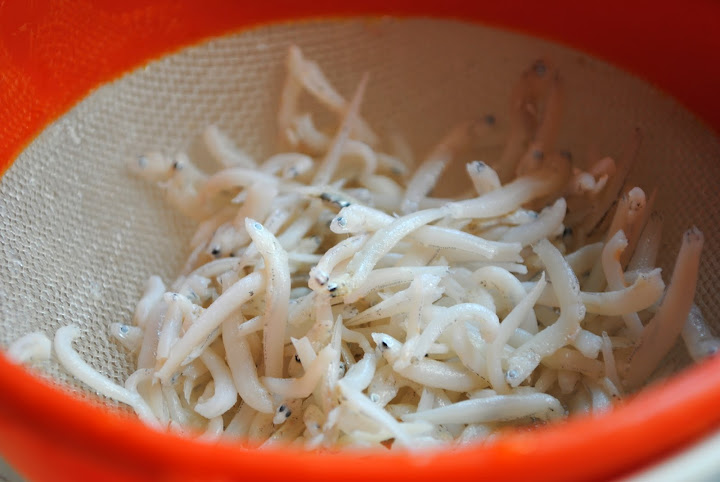 Dried anchovies – in Singapore, we tend to call it ikan bilis. Ikan bilis are often used to make fish stock, sambal or deep fried and served as garnishing. Here, my mom uses ikan bilis to make the stock for the Mee Sua Soup. 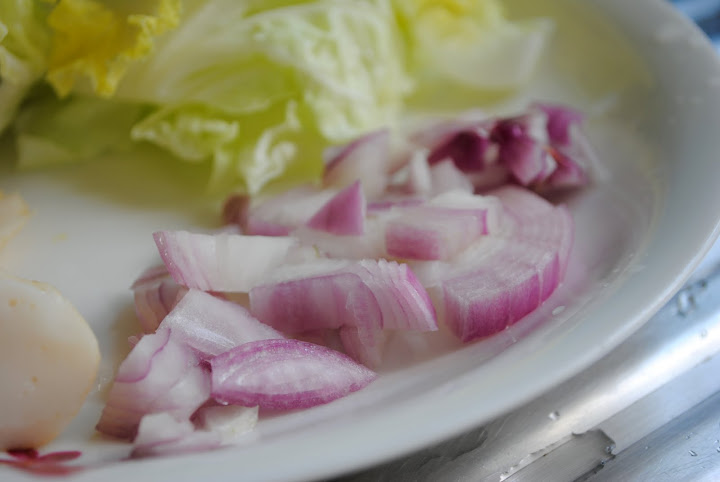 Next is some onion – for extra flavor as well. 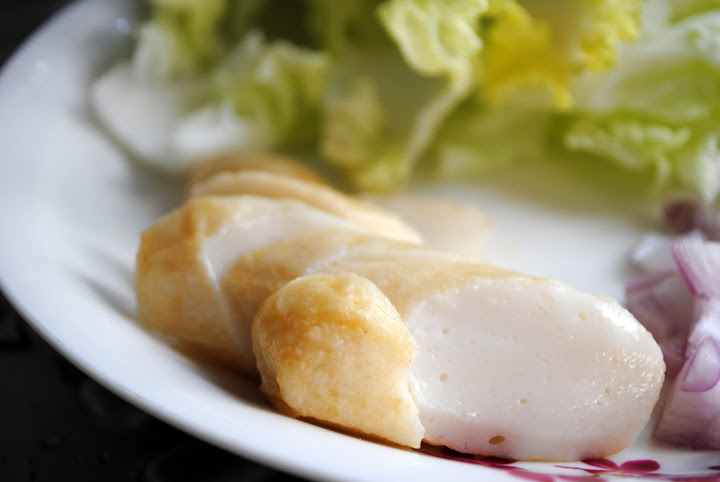 Some fish cake – you can use real fish slices if you like. Sometimes I’ll use prawns instead of fish cake. 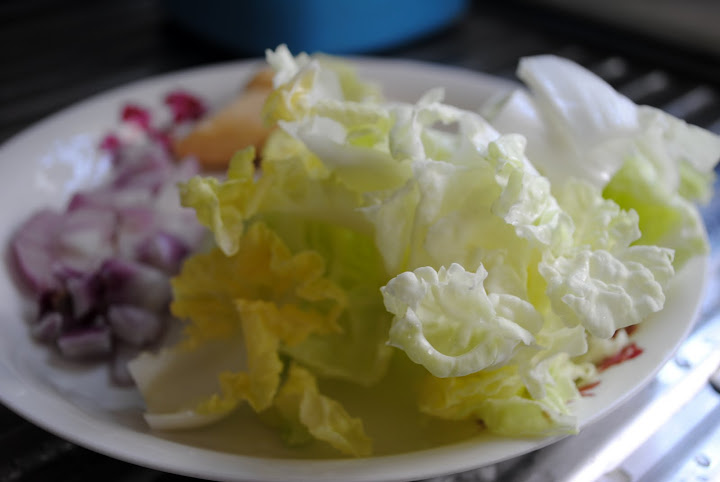 Vegetables – to add some colour to the dish. 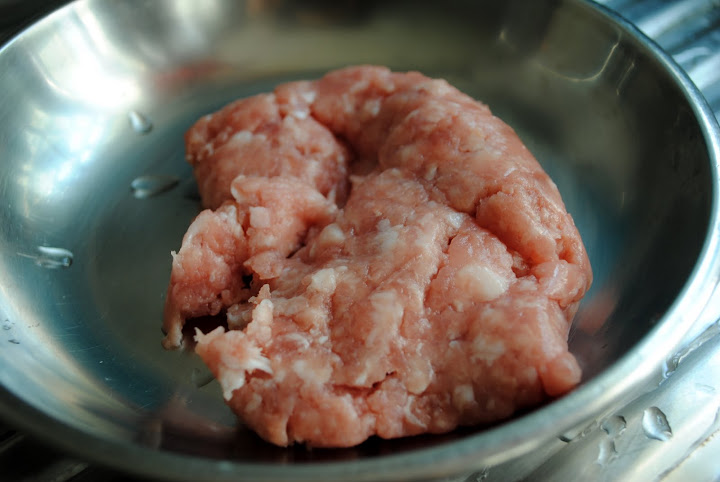 Minced pork – marinated in a little white pepper and soy sauce. And an egg (I didn’t take a photo of it) 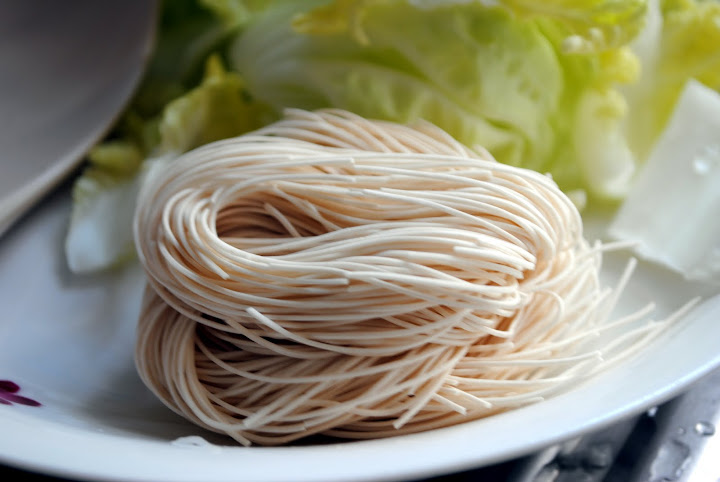 And of course, the Mee Sua. Normally I use one piece per person. 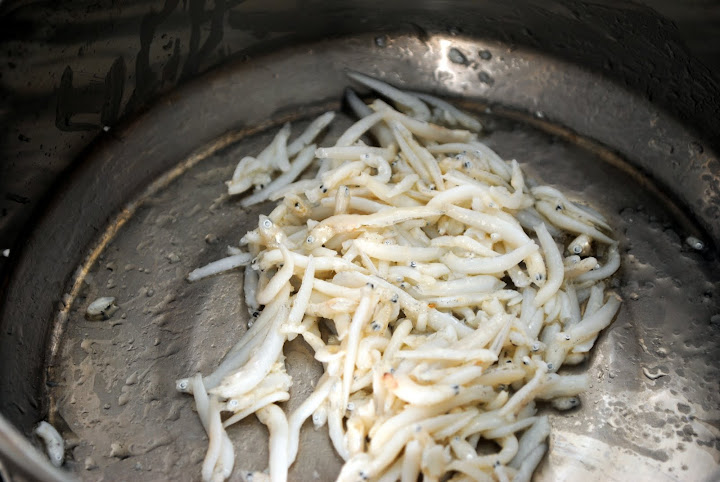 First fry the ikan bilis in a little oil over low heat until slightly golden. 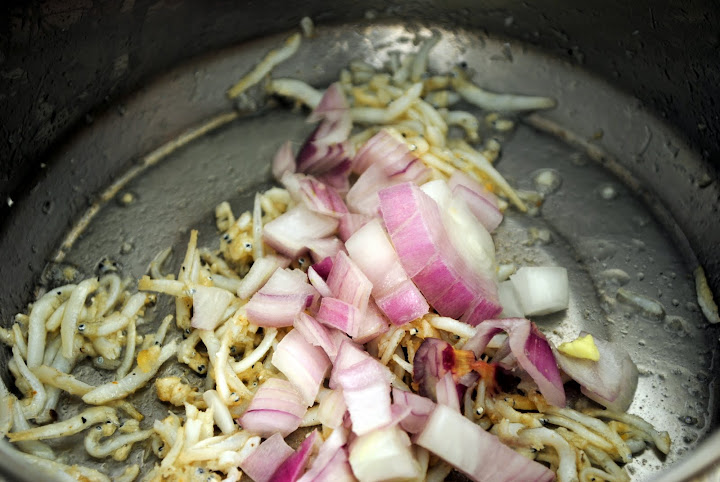 Add in the onion and fry until the onion’s translucent. 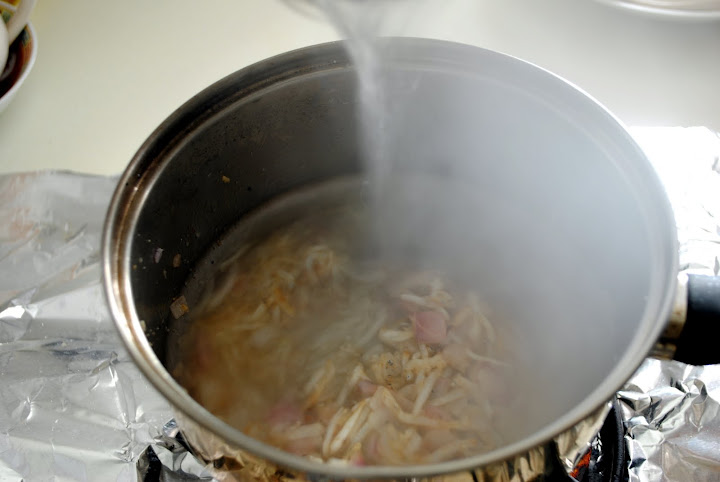 Add in a bowl of water and turn up the heat to let the soup boil, simmer for several minutes. 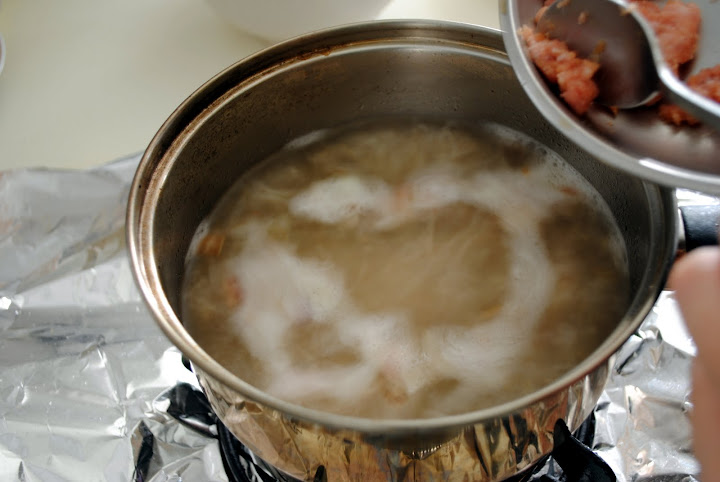 While the soup’s boiling, using a spoon, scoop small balls of minced pork into the soup – the hot soup will immediately cook the pork and form small minced pork balls in the soup. 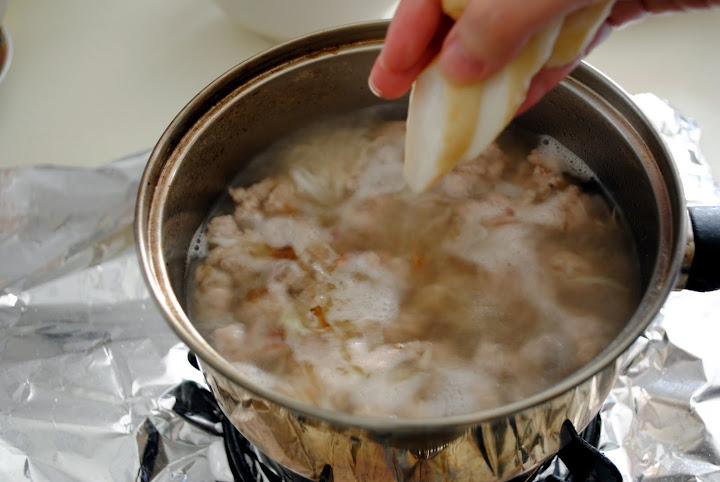 After adding all the minced pork and the soup has returned to a boil, add in the fish cake (or prawns or fish if you’re using) 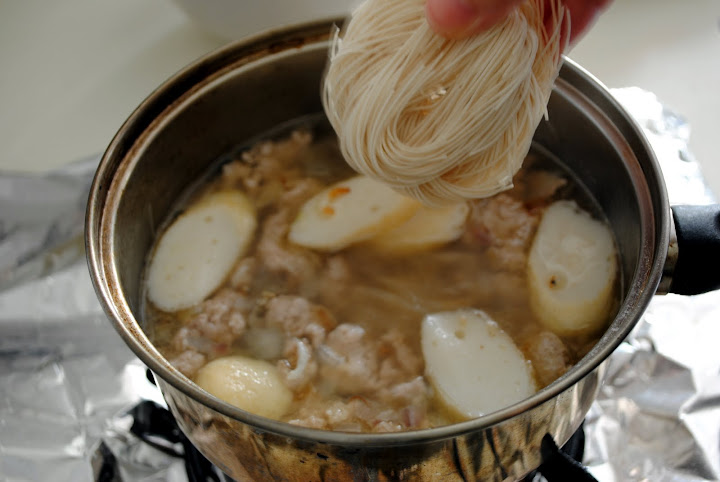 Add in the Mee Sua and let it cook till softened. 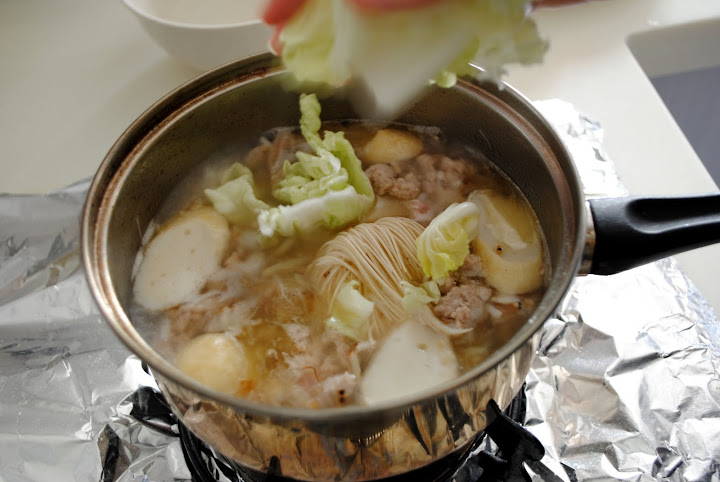 Get the vegetables in. 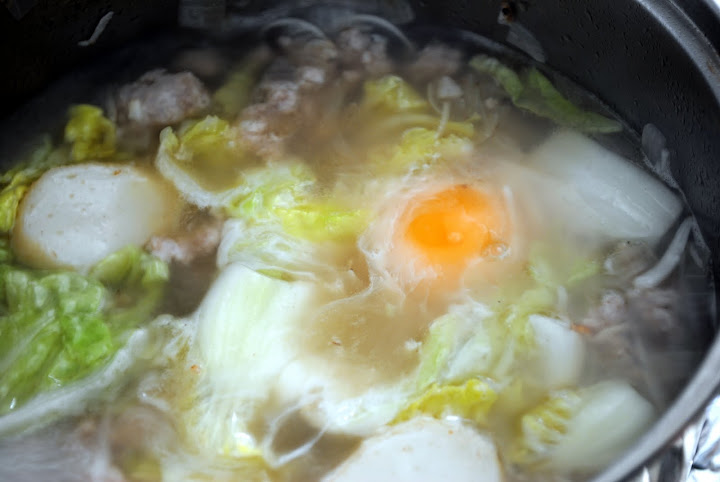 Break the egg into the boiling soup carefully and let cook for about 1 minute, so that the white is cooked but the yolk is only semi-cooked (that’s how I like my egg, you can let the yolk cook fully if you want). Season with salt and white pepper to taste.

Heat up some oil in a pot. Add in the ikan bilis and fry over low heat until they are slightly golden. Add in the onion and continue to fry until the onion’s become translucent.

Add in the water and bring to a rolling boil.

Once all the minced pork has been added, bring the soup to a boil and add in the fish cake / prawns.

Add in the Mee Sua and the vegetables. Cook until the Mee Sua has softened. Break the egg into the soup carefully and cook for 1 minute – the white will be cooked while the yolk will be semi-cooked. Cooked for a longer period if you want a fully cooked egg.

Season with salt and pepper and serve immediately. 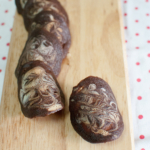 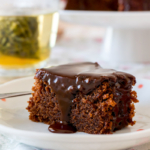 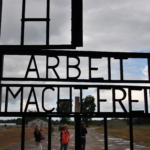 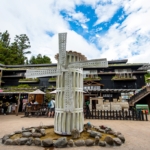 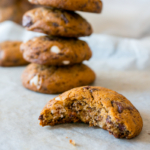 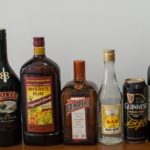 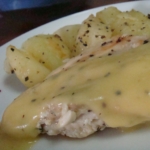 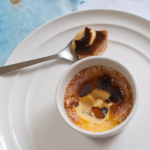