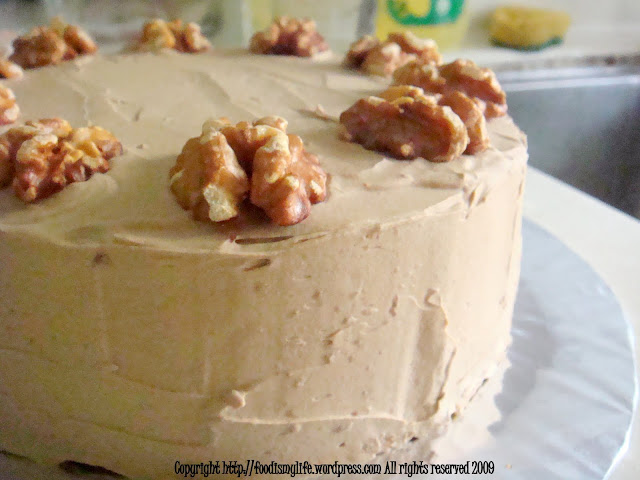 I was a very, very addicted coffee drinker. I remember buying many different types of instant coffee to drink and to sample. From espresso to white coffee to cappucino to frappachino... my favourite was and still is mocha. I mean, what can a chocoholic and a coffee-holic complain about this perfect blend of chocolate and coffee – all in one cup!

When I start putting braces two years ago, I stop drinking so much coffee. From what I have heard/read/learned, excessive coffee drinking might cause unattractive staining when the braces come off. I’ve seen a picture of the unattractive staning at the dental clinic and I swear that it is scary.

Nevertheless, I will still drink some coffee now and then when I need a perk, especially during the examination period. I will never want to fall asleep halfway while answering the paper, it will be disastrous.

Okay, end of digression. This is a coffee cake that I baked for two of my friend’s birthday. At that time I was still having a blocked nose so I’m not sure how good the cake was but all my friends gave raving reviews over the cake, so I guess it’s a success!

The recipe is once again taken from my now all-time favourite cookbook – 500 Cakes by Susannah Blake. I love, love, love this book because it has all the basic recipes you are looking for in a cake-book (a cake cookbook), it also has all types of cakes that you can bake for all types of occasions, and the best of all is that I can vary the flavour in the cake anyway I want. I’m going to try another recipe from it tonight!

When making the cake, I wanted to make sure that the cake will give off a very strong coffee flavour, so I used a mixture of espresso and thick coffee. However, there was no coffee taste at all in the cake. I wonder if it is because of the quality of the coffee that I used. I think I will try it again the next time with a better coffee.

As I was baking the cake a day ahead, I also made a simple syrup (combination of sugar, instant coffee and water) to brush the cake to prevent the cake from drying out too much in the fridge. I think in the future I’ll just use coffee instead of syrup to enhance the coffee taste.

To make up for the lack of coffee flavour, I also added a little bit more coffee when making the buttercream. There ain’t a lot of buttercream, just enough to fill and cover the cake thinly, which I think is just nice, otherwise it will end up coffee-overloaded or too creamy and rich.

There is plenty of walnuts used in the cake which I really love – the combination of a crunch and a soft bite. The texture of the cake was also liked by my friends... so I guess it’s a cake worth making again! (:

*Make sure the butter is left to soften at room temperature before you use it!

Line a baking tray with greaseproof paper, spread the walnut pieces on top and toast for 15 to 20 minutes until fragrant. Let it aside to cool.

Using an electric mixer, beat the butter first for a few seconds, then gradually add the sugar and beat until pale and creamy. Scrape the sides occasionally. Beat in the eggs, one at a time, beating well and scraping the sides after each addition. Sift half of the flour into the batter and fold in gently. Sift the remaining half of the flour and fold in. Fold in the cooled walnuts and the coffee. Divide the mixture between the cake tins and spread out evenly. Bake for 20 to 25 minutes until the cake springs back when pressed gently and the skewer comes out clean when inserted into the centre of the cake. Transfer to a wire rack to cool.

Make a simple sugar syrup or simply coffee if you don't intend to serve the cake on the day itself.

To make the buttercream, warm the milk and coffee in a pan, stirring until the coffee has dissolved. Leave it aside to cool. Using an electric mixer, beat the butter first for a few seconds, then gradually add in the icing sugar until pale and creamy. Stir in the coffee mixture.

To assemble, first freeze the cake layers for 15 minutes. This will make the icing job easier. Place a layer of the cake on a cake board. Brush the syrup over the top of the cake (not too much to "drown the cake"!) and spread slightly less than half of the buttercream over one of the cooled cakes. Brush syrup over the other layer and place the brushed side down onto the buttercream. Brush the top with syrup and spread the remaining buttercream on top and the side and decorate with walnut halves. 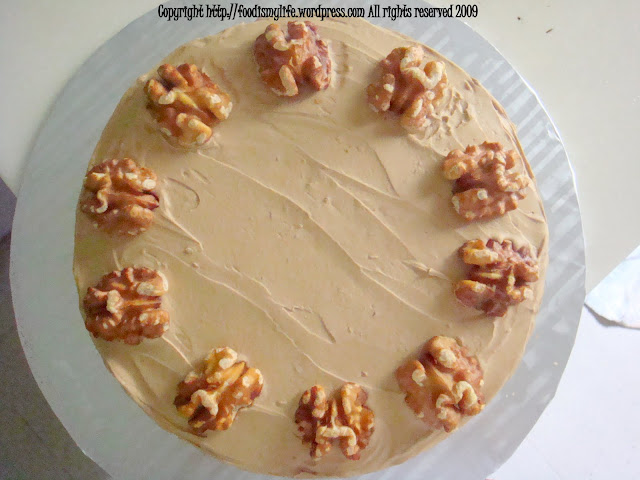