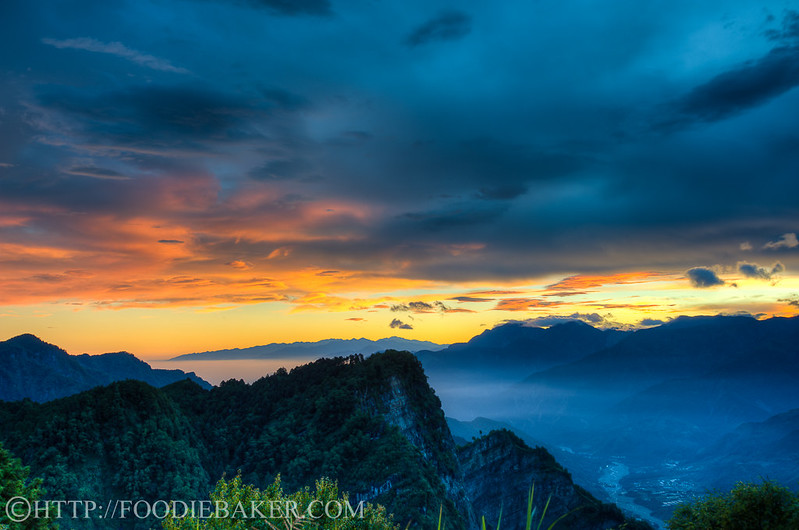 If you are heading to Taiwan and is fond of greenery, nature and cool temperatures, Alishan National Scenic Park (阿里山國家風景區) will be one of the two places that I recommend you going (the other being Cing Jing, which I will blog about another time). The park is actually a mountain resort located in the mountains of Chiayi County in Taiwan.

The development of Alishan started during the World War II, when the Japanese built a narrow-gauge train to transport the giant cedar logs out from the forest area. After the end of the World War, the trees are still being transported using the train until late 1970s, when tourism had became the main source of income for the area. The train was then converted into a passenger train.

As we were heading to Alishan from Kaoshiung, we took a train from Kaohsiung (高雄火車站) to Chiayi (嘉義火車站) then we changed to a bus. At the bus station, there were a lot of taxi drivers asking us whether we want a ride up, but of course at a much steeper rate. As we weren’t rushing, we declined their “kind offers”. The bus ride took about 2.5 hours, and since we left early, we reached there just before lunch time. 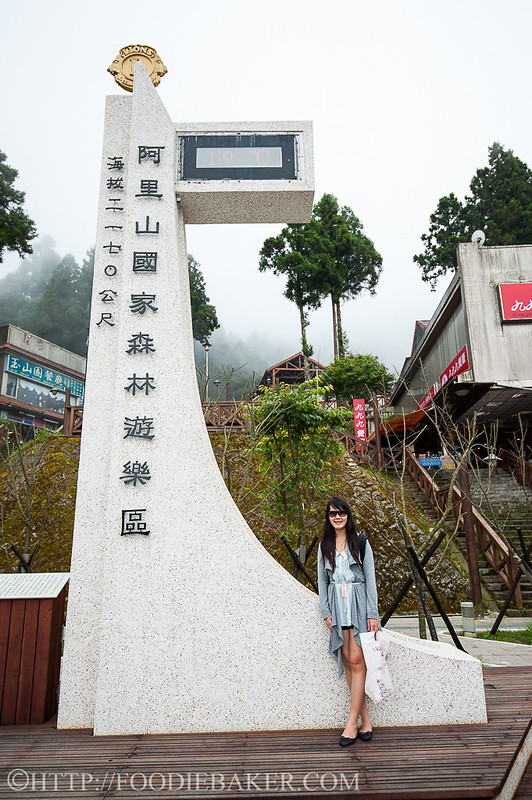 The clock tower shows not only the time, but also the temperature. As it was summer, the weather was pretty cooling, at about 19 degrees Celsius. As night, it can drop till 16 degrees Celsius. If you are visiting in the winter, it will be even colder! It was still alright to wear shorts in the day but I changed to pants after the sun sets. 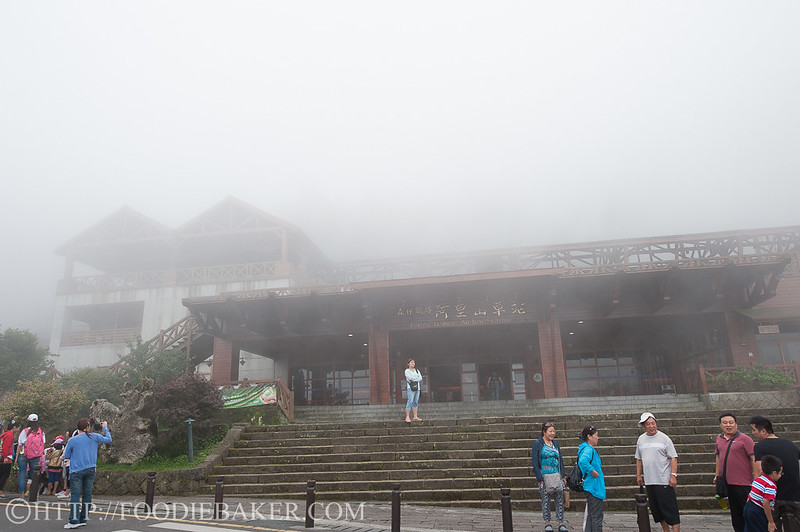 After putting down our bags and having a quick lunch (not fantastic so I’m not going to blog about it), we head to the train station to catch the train to the nature reserve.

Train timings are listed at the ticket counter, including timings for the train to catch sunrise the next day. The sunrise train timing is not fixed so it’s best to note down the timing – there’s only 1 train there, so if you missed it, you’ll have to come back the next day. We also got the train tickets the day before so that we don’t have to waste time queuing to get it the next morning.

Japanese cedars are not related to the cedar family, but the cypress family. They are abundant in the forest and can reach up to 70 metres tall, with reddish-brown bark. There are other species of cypress trees in the forest, also with the unique reddish-brown bark. Because of this trait, tourists have been known to abused the trees by peeling off the bark and bringing it home as souvenirs. Hence, many old tree trunks are wrapped to prevent tourists from hurting the trees further. 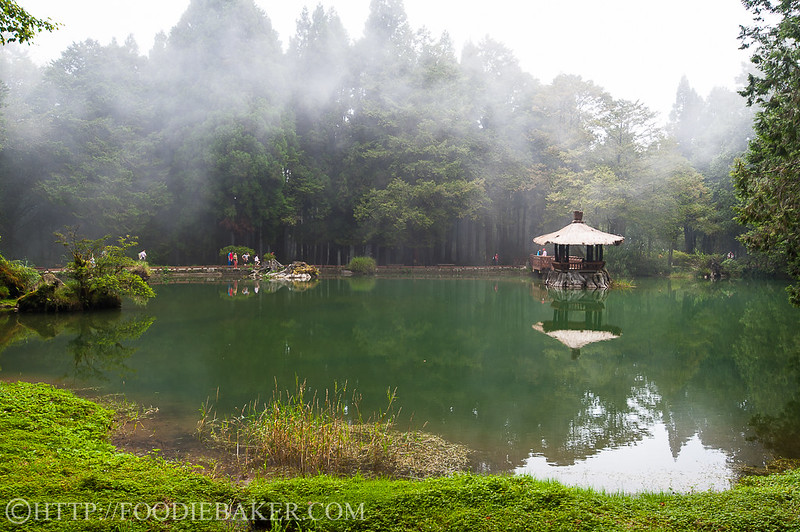 Alishan was declared as a “national scenic area” only in 2001, so being relatively new, there are plenty of tourist groups flocking to this place every day. Not wanting to be a part of their rowdy group, upon alighting the train, X and I took our time to walk to the Sisters Ponds, and we also waited until the crowd had died down before X started taking photos. 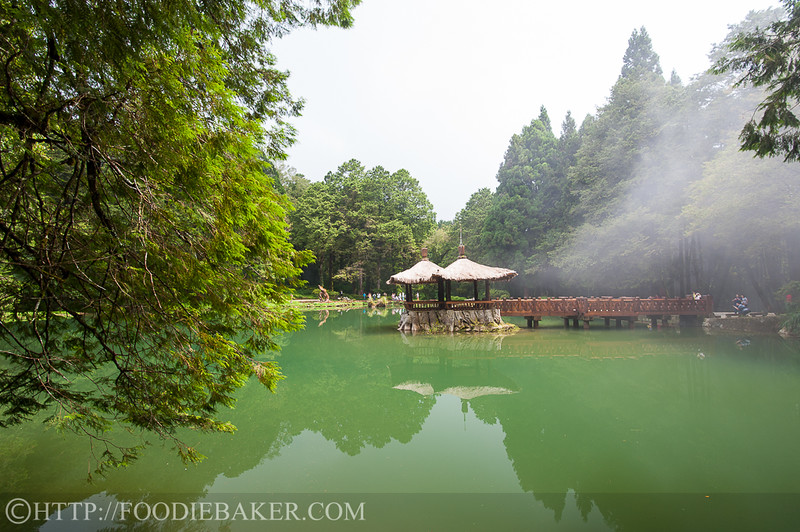 I’m not sure how the name of the ponds come by, but it definitely would have been a very relaxing and peaceful place if not for the rowdy tourists and their tour guides explaining the sights using their portable microphones…

Left: bridge to another trail; Right: The Four Sisters

When an old cypress tree was felled, four cypress seeds happened to be dispersed into the cracks of the stump of the fallen tree, and they grew into trees side by side, giving it the name The Four Sisters. 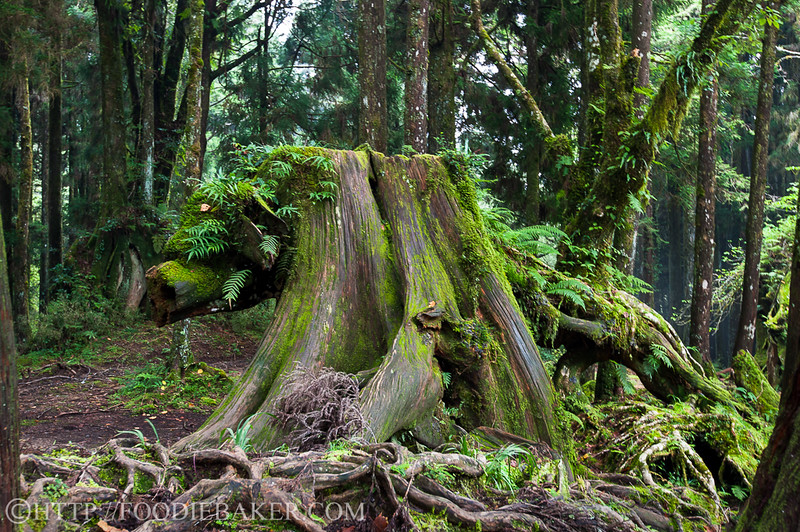 Golden Pig Tree (金豬報喜) – can you spot the pig in the tree? 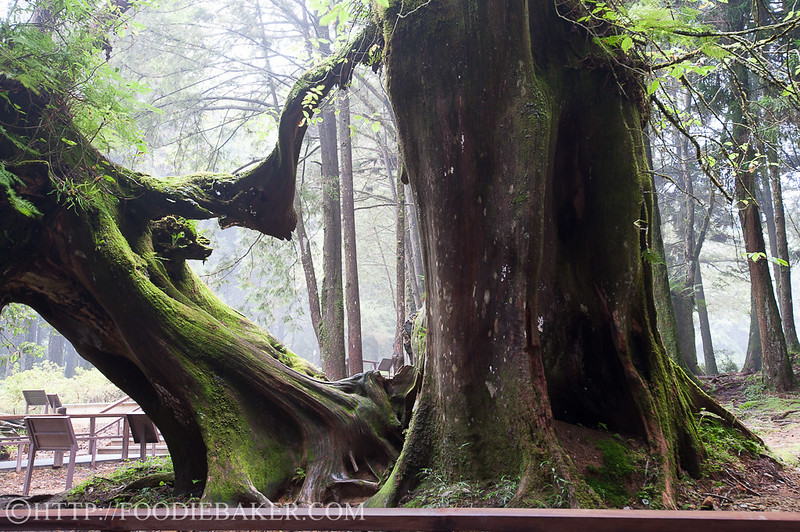 At the end of the Sisters Ponds trail, there is a flight of stairs down, with tall cypress planted on both sides. Very pretty and mysterious. 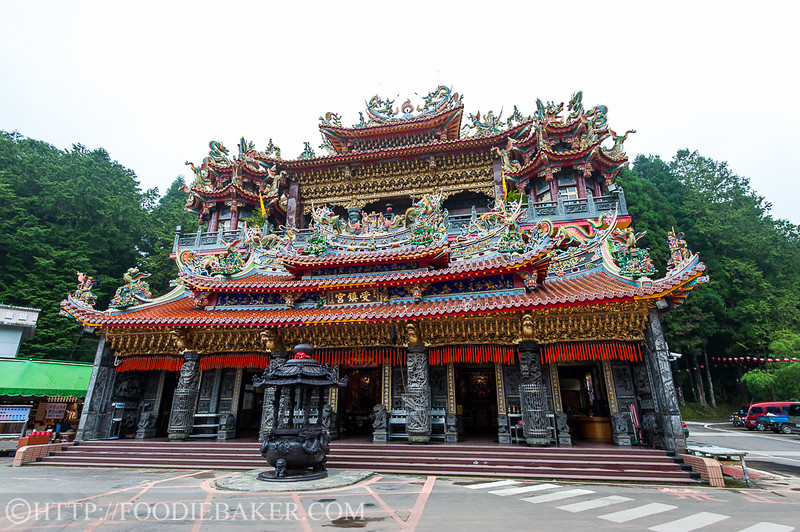 The Shoujhen Temple is the largest temple within Alishan area and situated 2,150m above sea level, it is also the highest altitude temple in Taiwan. I’ve read online that on every 3 March in the lunar calendar, just a week before Syuantian Emperor’s (God of Justice; 玄天上帝) birthday, a group of Alishan moths will appear and stay on the statues for without food and without moving for at least a week. The superstitious version is that the moths are there to celebrate the Syuantian Emperor’s birthday while the scientific version is that March and April are breeding seasons for the moths and they are attracted by the heavy smoke and lights emitting from the temple. Which one do you believe in?

We continued onto the Giant Trees Trail (阿里山巨木群棧道), and we passed by the Three Generation Tree – the first cypress tree grew for 1,500 years before it withered and died. After 250 years, the moss that grew all over provided moisture and with sufficient sunlight, a second cypress tree grew from the dead tree, sapping nutrients from the dead tree. After 300 years, the second tree died and many years later, a third tree managed to grow from it, hence giving it the name Three Generation Tree. This just shows how strong cypress trees can be! 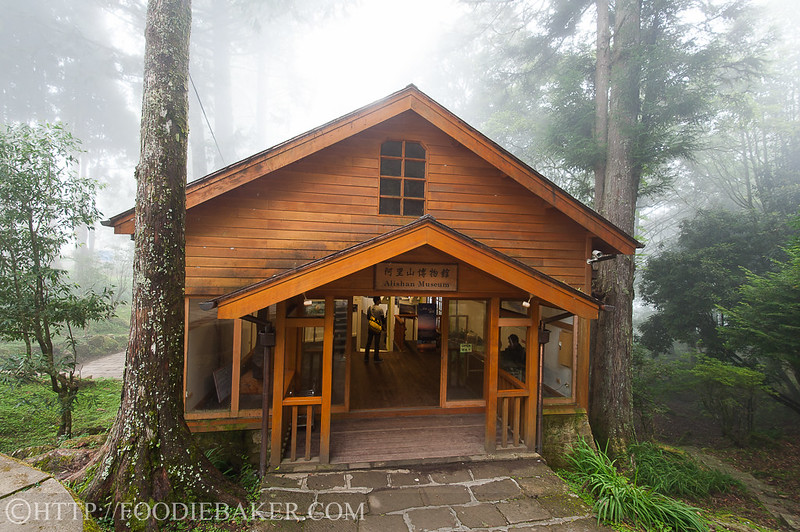 In the middle of nowhere (pretty much), there stood a wooden building (my guess is it’s built using cypress), which houses a photo exhibit of Alishan, the photos inside are really pretty!

Not far from the museum stood a pagoda erected in 1936 during the Japanese colonial period. As the trees in Alishan were heavily logged during that period, a pagoda was built to pacify the tree spirits. The circular steps represents the growth rings of the tree while the pagoda itself represents the tree trunk.

Xianglin Giant Tree is… huge, majestic, and simply, WOW. Standing at at least 45 meters tall, this red cypress tree is about 2,300 years old! It is the second sacred tree in Alishan as the first tree died as it was struck by lightning. 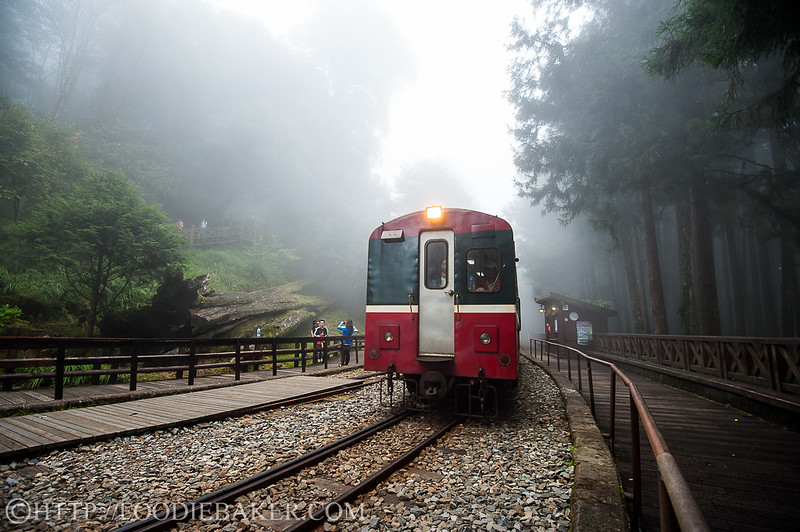 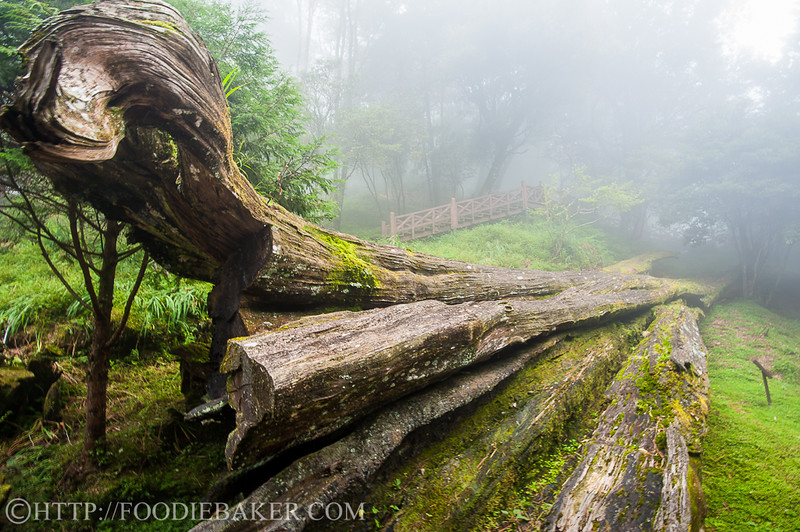 Just next to the train station lies the very first sacred tree. This tree was discovered in 1906 by a Japanese technician. Standing at 55 meters and estimated to be more than 3,000 years old, it was being revered as the Sacred Tree. However, the earthquakes and typhoons in Taiwan did not bode well for the tree – the tree was struck by lightning twice – once in 1953 and once in 1956, with the latter causing the tree to burn inside out, resulting in the tree’s death. The earthquakes and typhoons also resulted in the soil around the tree to loosen, causing it to lean dangerously. In 1997, the torrential rain caused the soil to loosen and a part of the tree fell on the railway tracks. After reviewing the situation, the Alishan management decided to log the tree on 29 Jun 1998 and it was laid down at the place where it once stood, next to the train station. 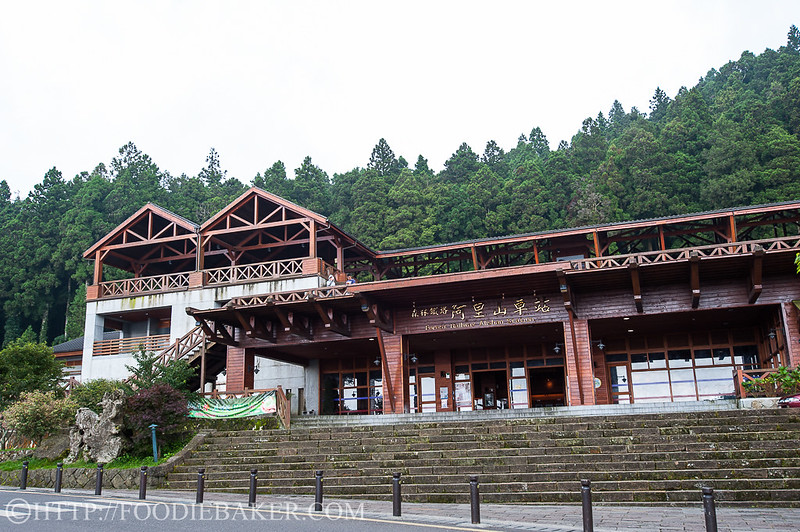 Another view of the train station – the mist had cleared!

Mochi is a pretty popular snack in Alishan, and I love those freshly made ones – pretty good!

I don’t think there’s much to do at night in Alishan, so we chose to have a long dinner at a nearby restaurant. We had steamboat (perfect in the cold weather) and also some of the common mountain dishes – stir-fried bamboo shoots and mushrooms, and stir-fried wild boar meat. If you’re on budget, there’s a 7-Eleven nearby and you can grab some cup noodles there. 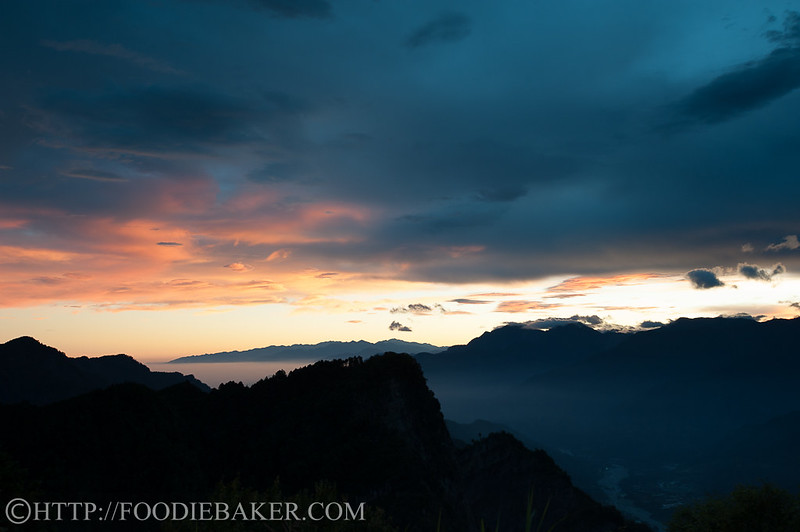 Sunrise at Alishan – see the sea of clouds (雲海)?

On the next morning, while holding a cup of hot coffee in our hands, we boarded the train to Jhushan (祝山), a 30-minute train ride from Alishan train station. When we alighted from the train, instead of crowding with the people on the viewing platform right next to the station, we walked for another 15 minutes to the helicopter pad. Unfortunately, the viewing platform next to the helicopter pad was closed as Typhoon Soala destroyed most of the path, making it too dangerous to head to the platform. Otherwise, the platform would have been a better place to view the sunrise as the crowd is thinner. Even so, there weren’t any people there except for us (and an uncle who was there exercising), so it was really quiet and peaceful. 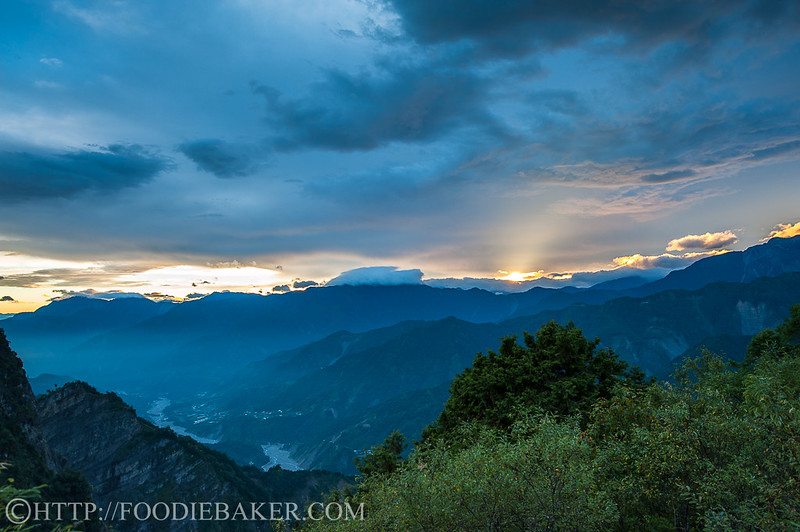 The sun peeking from the mountains 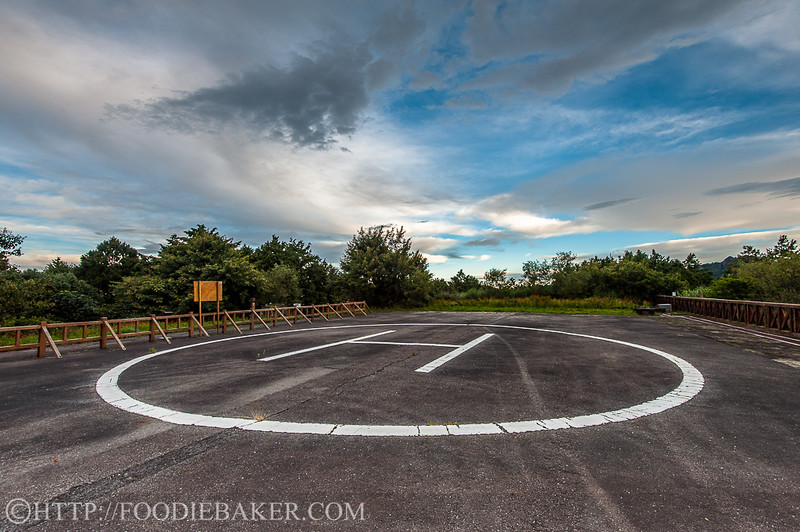 Helicopter pad where we viewed the sun rise from

If you have the time, it would be a great time to hike down – about 3-4km downhill hike. As we were catching a ride to Sun Moon Lake at 10am (and since we have already hiked the previous day), we caught the train (only 1 train back!) and went back for some snooze before hitting the roads again.

While on our way down the mountain, we passed by a pair of trees named Husband and Wife Trees (the one on the left is the Wife, in case you are wondering). This pair of dead red cypress trees were probably a couple thousand years old before they were burnt in 1963 and struck by lightning in 1996. Apparently it was also leaning dangerously (just like the First Sacred Tree), so the trees may be logged and laid down. 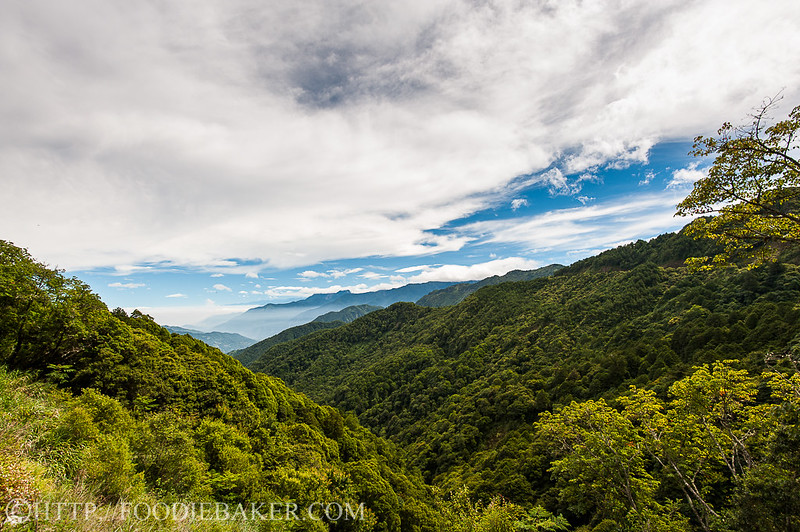 Can you see the sea of clouds in the far distant?