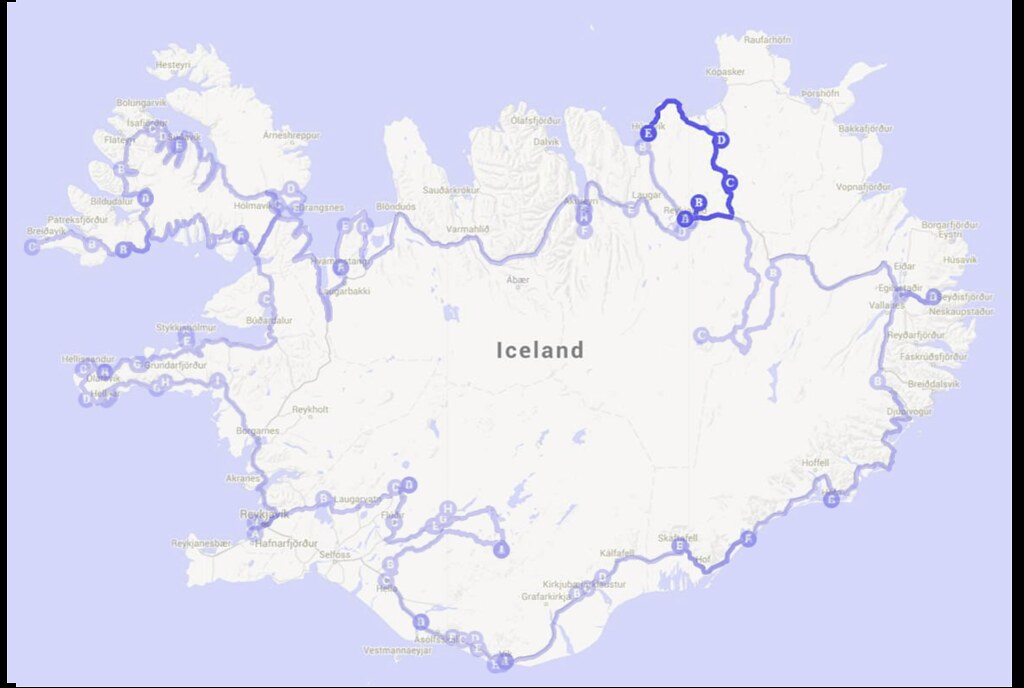 So I’m finally back with a new update on our Iceland travelogue (oops I have procrastinate this for sooo long!) Without further ado, let’s continue on with Day 11!

The previous night’s temperature fell to 3 degrees Celsius, so when we woke up at 8 in the morning, we were extremely reluctant to get out of our warm sleeping bags – but of course we still did in the end. d: If you are planning to go whale watching at Húsavík, you can book your tickets at the Myvatn campsite – we forgot to book the tickets until we were at Leirhnjúkur, so we had to drive back to Myvatn campsite to book the tickets. Myvatn campsite offers discounted prices for whale watching, Myvatn Nature Baths (will be blogging about our experience in later travelogues!) and other tours, so you can check them out! 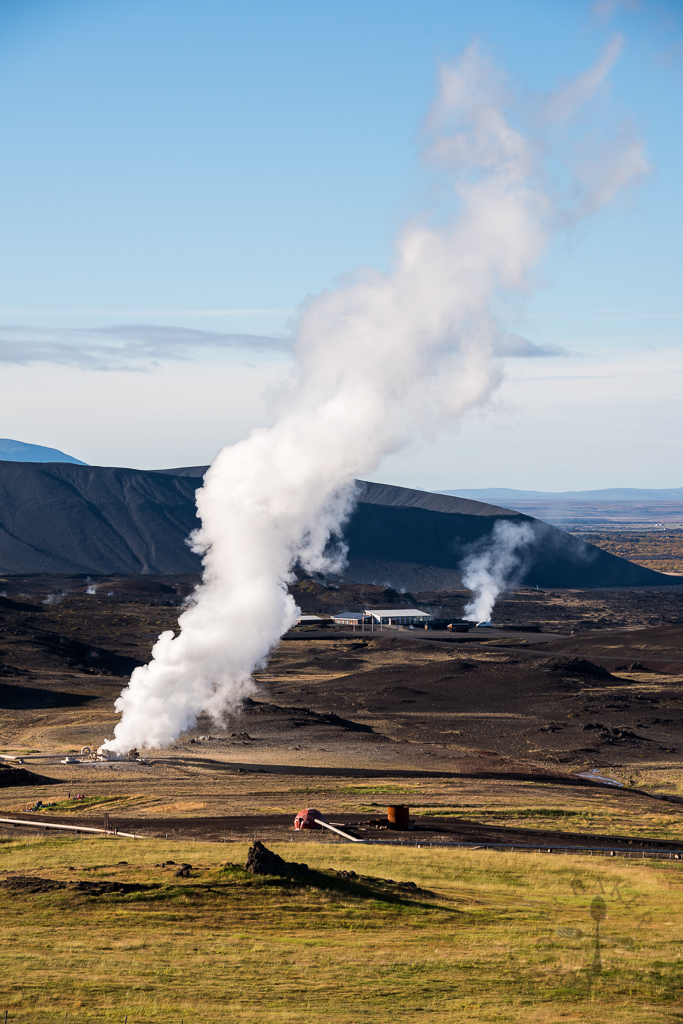 After an hour and a half of washing up and eating breakfast, X started the car and we head off to our first destination for the day, Námafjall geothermal area (also known as Hverir), a high-temperature geothermal area with fumaroles and mud pots. The drive there is very easy – just follow Google maps or on Route 1 and turn in when you see the sign “Hverir” (the road is unnamed so I can’t provide the route number). Even before seeing the fumaroles and mud pots, we were “greeted” by the distinct and slightly choking “smelly egg” smell, bleargh! 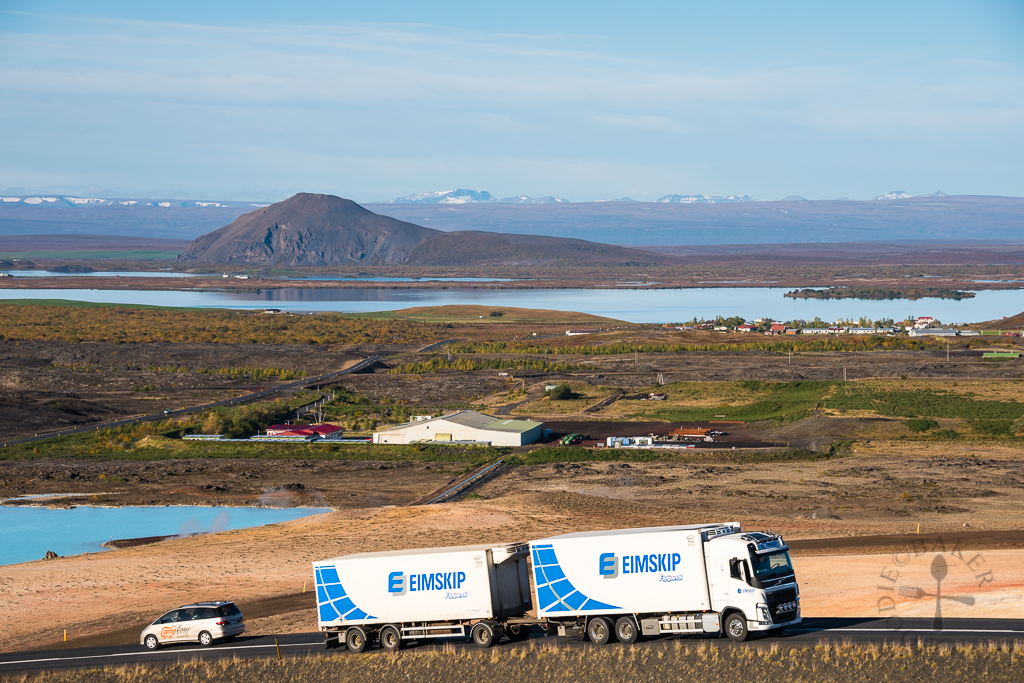 Námafjall geothermal area has a depth of 1,000 metres, with internal temperatures reaching above 200 degrees Celsius. Though it’s no fun inhaling the smelly gases (we got used to the smell soon after), it’s pretty fascinating watching the mud pots bubbling away and the fumaroles spewing scalding steam. 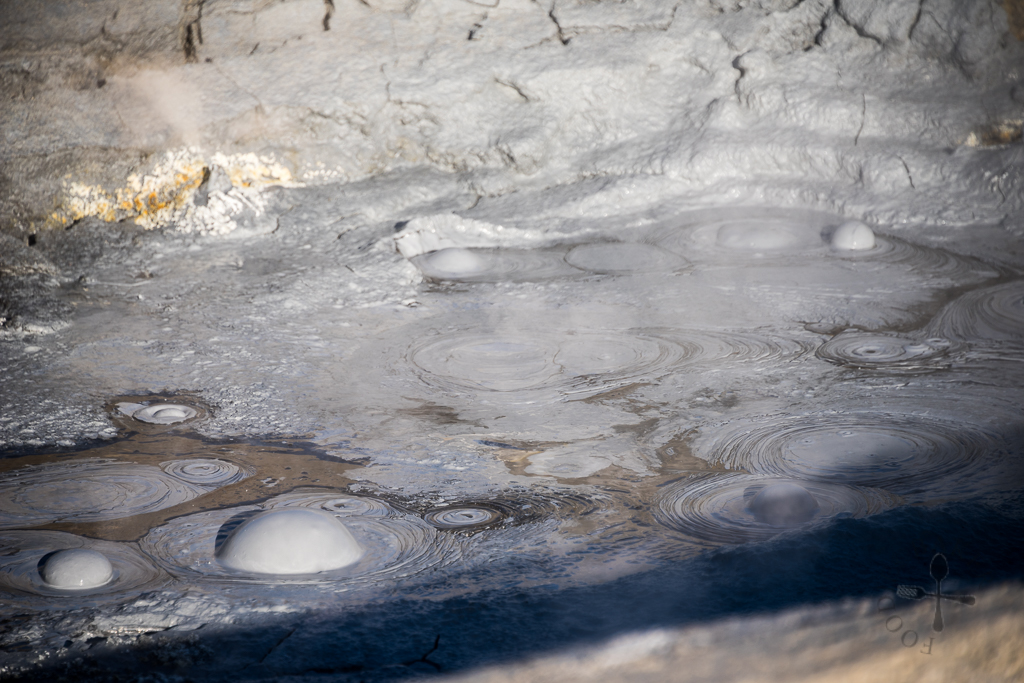 When cold ground water seeps down to magma intrusions, it is heated into steam which rises back to the surface. This steam contains fumarole gas, which in turn contains sulphur hydroxide that is responsible for the “smelly egg” hot spring smell. Some fumarole gas rises through water surfaces, producing sulphuric acid that dissolves in water. The sulphuric acid dissolves the rock and soil near the around the water surfaces, creating the greyish and bubbling mud pots.

Smelly and bubbly!
Note: We spent about 45 minutes at the area. Do note that some of the walking paths may be wet and muddy, so try to avoid those areas if you want your shoes to stay clean! 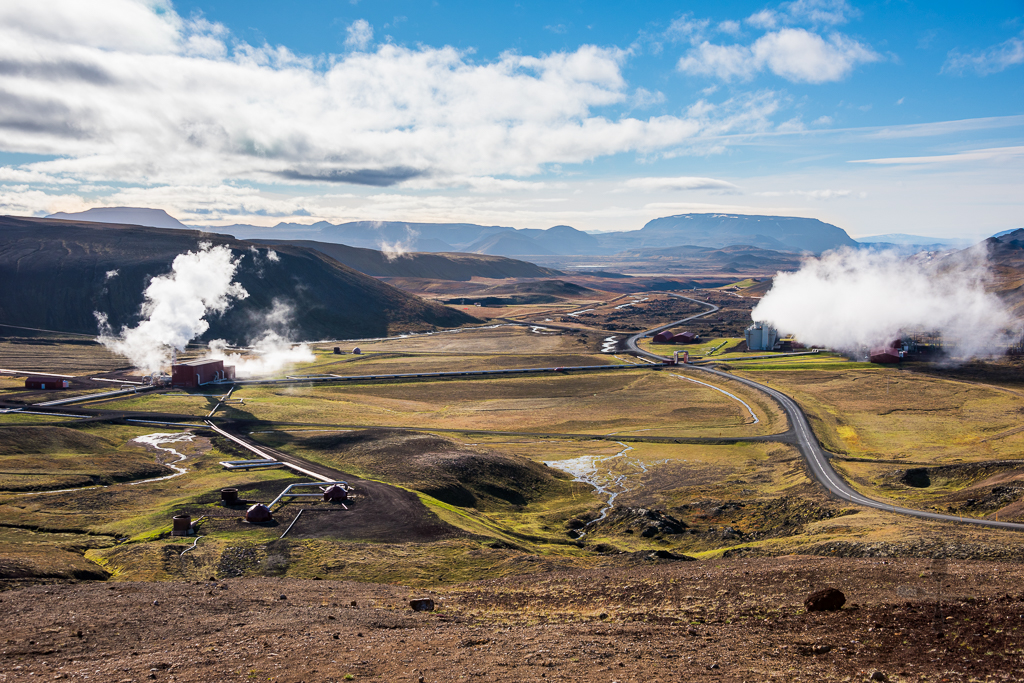 The Víti Crater is located on the opposite side of the road across Hverir – again, there is no number assigned to the road, just a sign which says “Krafla”. We passed by Krafla Power Station so we went in for a look and learned that experimental drilling in Krafla started in 1974 and in 1978, Krafla Power Station was completed. This steam-generated power station has 33 boreholes which produce 500 GWh of electricity annually.

We continued to drive all the way till the end of the road (we passed by the parking lot for Leirhnjúkur – we will come back to this place in a while!) to reach another parking lot for Víti Crater. 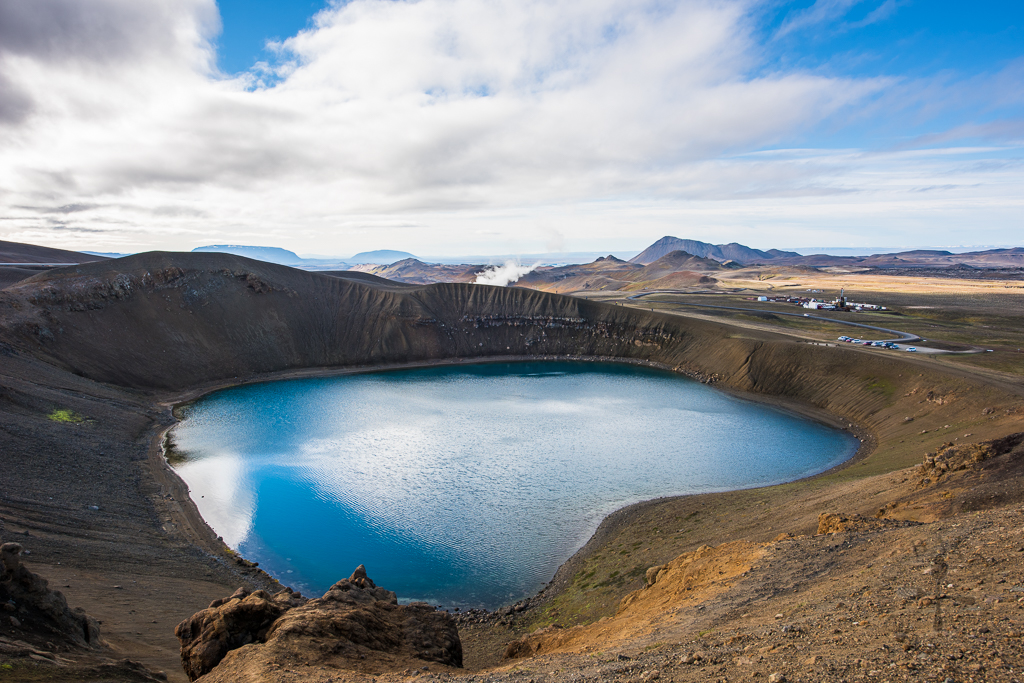 Do not confuse this Víti Crater of Krafla with the Víti Crater in Askja – both are at different places (the one at Askja requires a 4WD to reach there) but both are equally surreal. 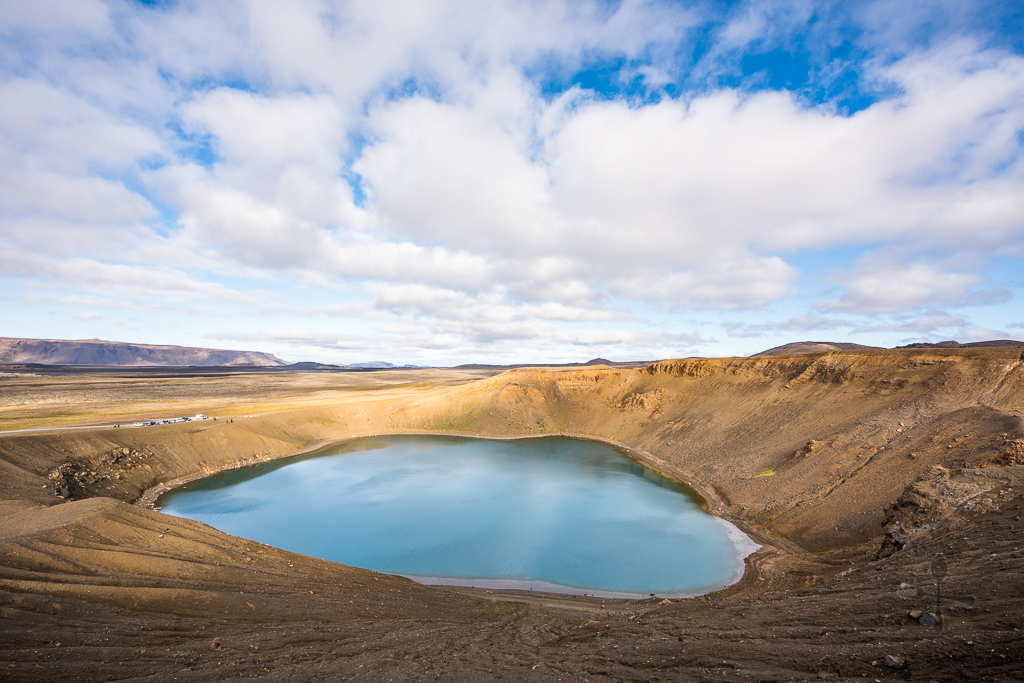 The bigger lake at Víti Crater

Even though Víti means “Hell” in Icelandic, this crater of hell is definitely not what I imagined hell to be. The Víti Crater is formed after Krafla’s eruptions in 1724 (the eruption continued for about 5 years!) and the result is two beautiful and stunning lakes which were visited by many from all over the world. 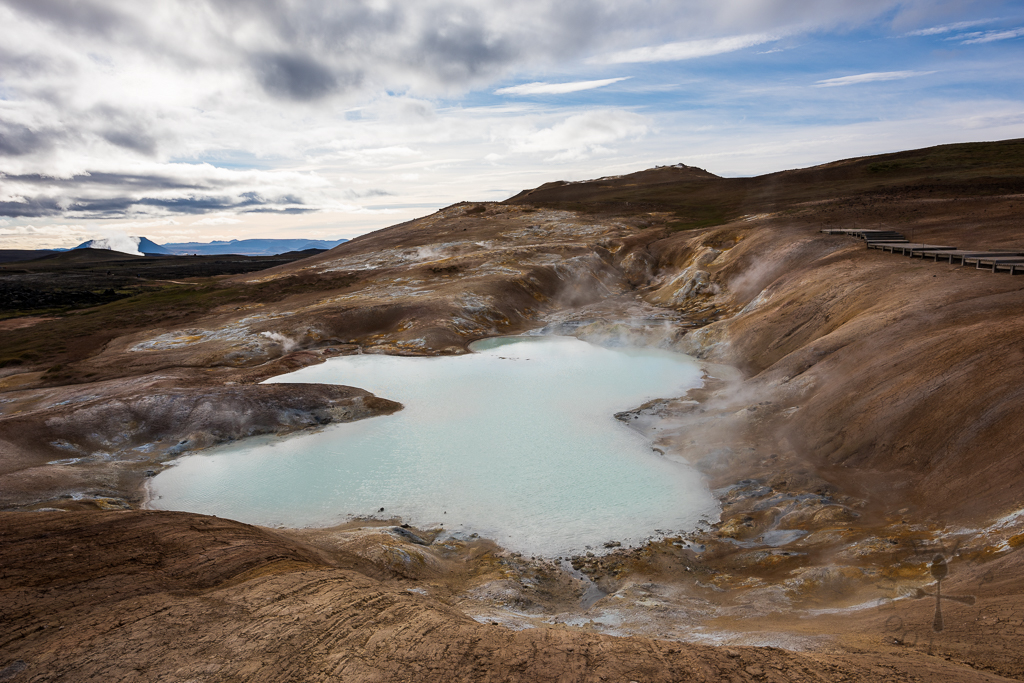 A smaller, second lake of Viti

We spent about an hour hiking and stopping numerous times to take in the views and to take photos. It was extremely windy when we were hiking and the soil was soft and damp, so I was quite worried that I would slipped and fall (thankfully that didn’t happen). There were also signs warning us to stay on the hiking path – the temperature outside the hiking path can supposedly melt the soles of our shoes! 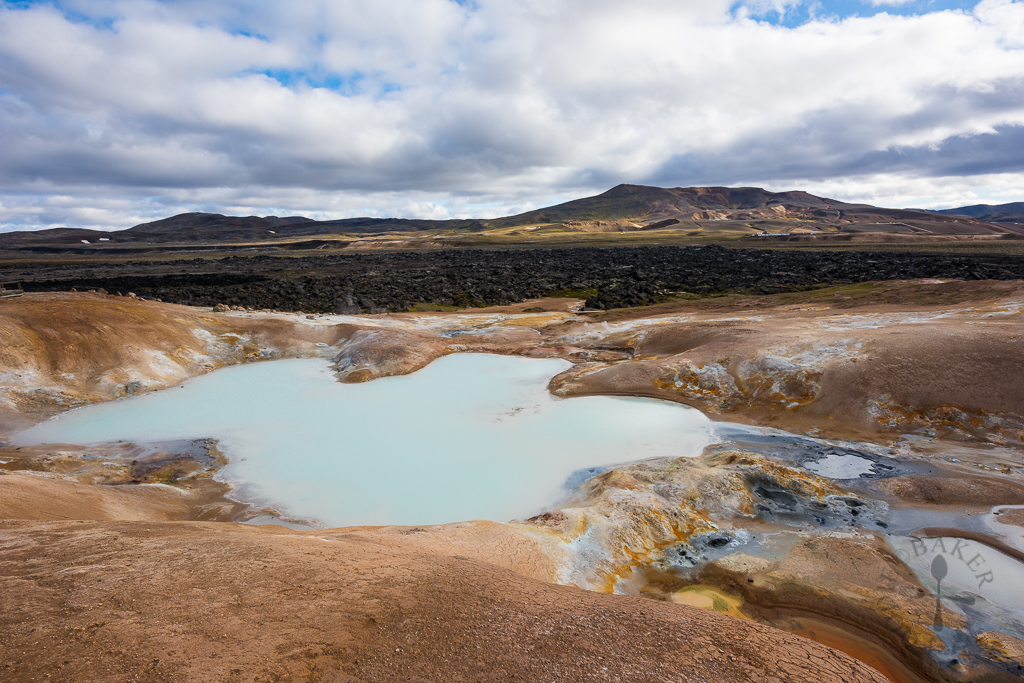 Passed a small pool on the way to the lava fields

If you want to experience how it’s like walking on the moon, a lava field is the best place to be. After parking our car (the parking lot is just a short drive out from Víti Crater), we hiked for about 20 minutes on dirt road then a bridge made of wooden planks before reaching Leirhnjúkur lava fields. 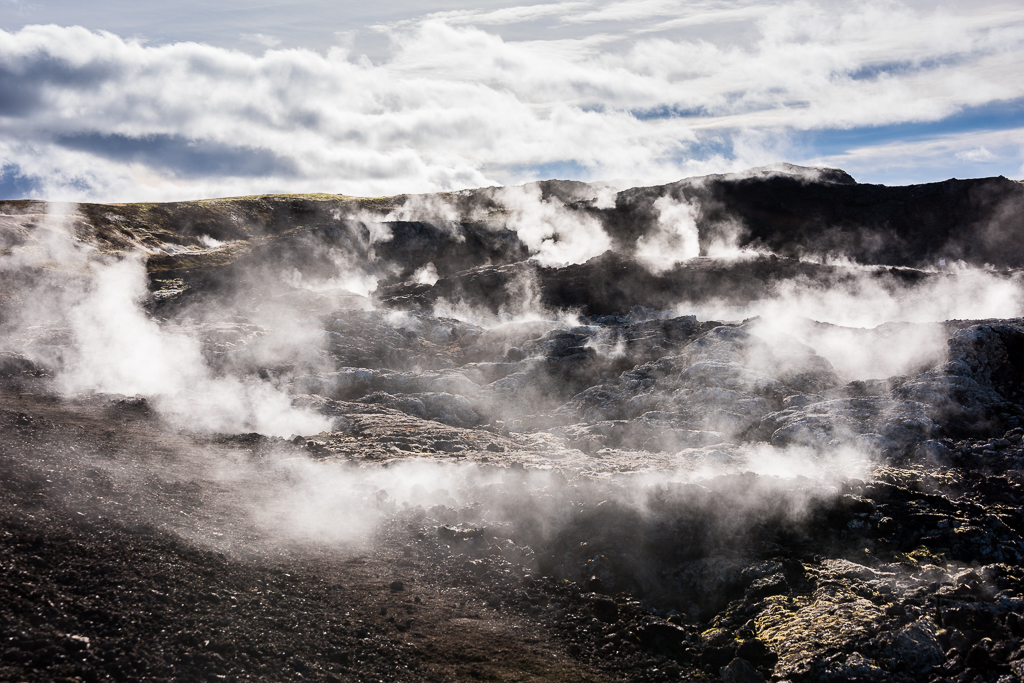 Even though more than 10 years have passed since the last eruption at Krafla in 1984, Leirhnjúkur lava fields are still covered with hot fumes. Despite this, we were still able to hike on the craggy terrain for an unforgettable walk on the “moon” (don’t worry, the more dangerous parts are roped off). The sign posts were not as well-marked as other hiking trials we had been on so we got lost for a while in the lava fields. After about an hour of hiking, we ended up back on the wooden plank bridge and made our way back to the car. 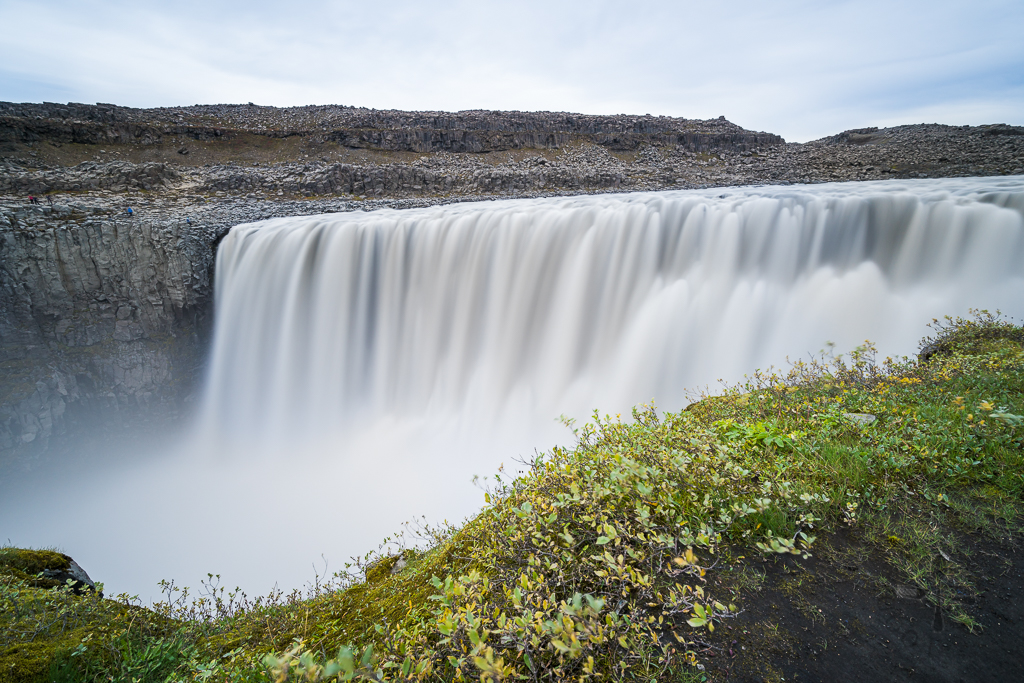 Before we headed to our next place, we realised we forgot to book our whale watching tickets so we drove back to Myvatn campsite to book them before driving off to see one of the most powerful waterfalls in Europe – Dettifoss. 100 metres wide and plummeting 45 metres (about the height of Statue of Liberty!) to the Jökulsárgljúfur canyon below, Dettifoss is the largest waterfall in Iceland in terms of volume discharge – the crashing of water down into the Jökulsárgljúfur canyon is so loud that you can hear it before you see it! 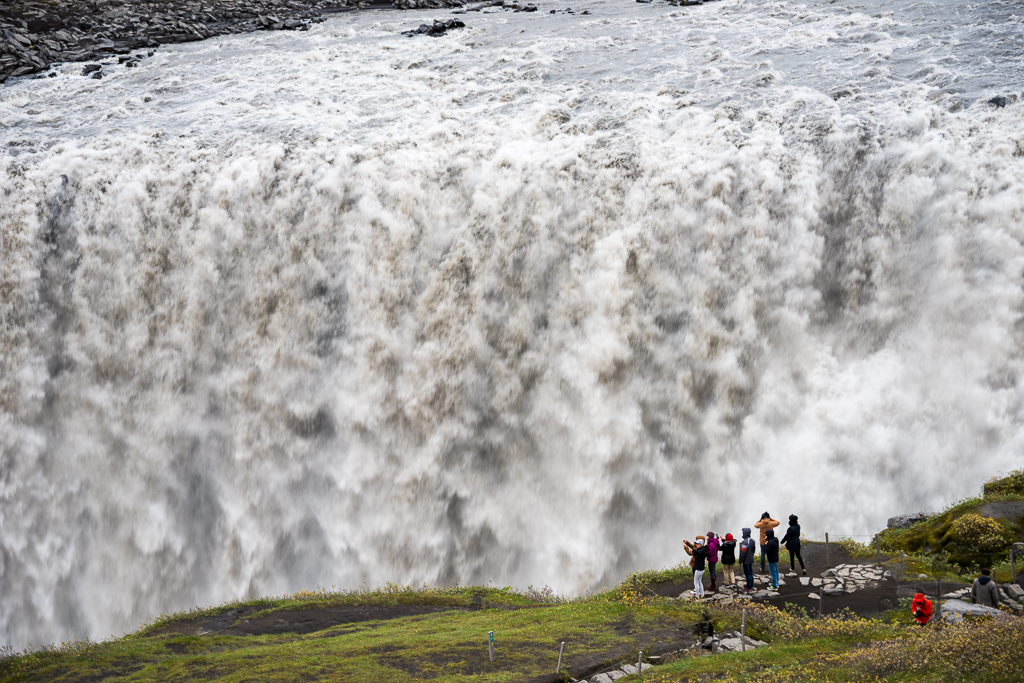 Sheer power of the majestic waterfall

There are 2 ways to reach the waterfall, Route 862 (west side) and Route 864 (east side) – we chose Route 862 as the reviews on TripAdvisor say the view from there is better. The drive took us about an hour from Leirhnjúkur lava fields but it was a smooth drive because a part of Route 862 (from Route 1 to Dettifoss) was paved tarmac road. Route 864 remains a gravel road, so even though it’s accessible by 2WD vehicles, more time will be needed to reach the waterfall.

After reaching the parking lot (it’s free), we followed the signs to reach Dettifoss – climbing down the steps to reach up-close to the waterfall can get quite dangerous because the path is all wet (some parts may be muddy) from the water mist created by the waterfall. It was also constantly “raining” there due to the water mist, luckily we had our waterproof windbreakers with us! 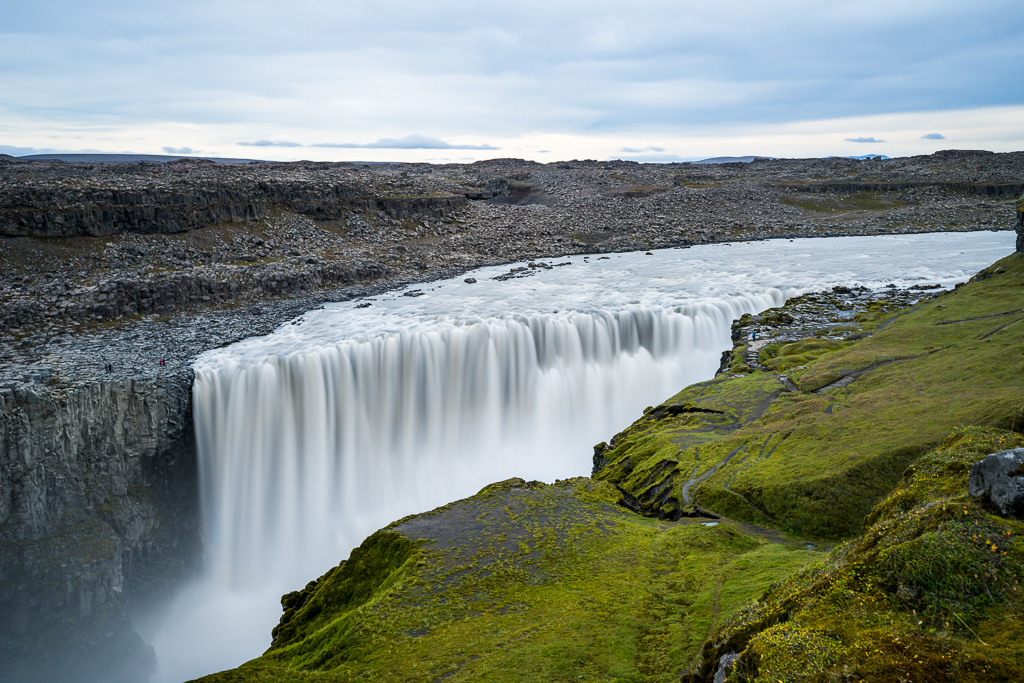 So would the view from Route 864 (east side) be better? In our opinion, the east side would probably allow us to reach even closer to the edge of Dettifoss and feel the sheer power of the waterfall but one could only capture the full width and top-down view of the waterfall from the west side – so I guess it really depends on what you want! 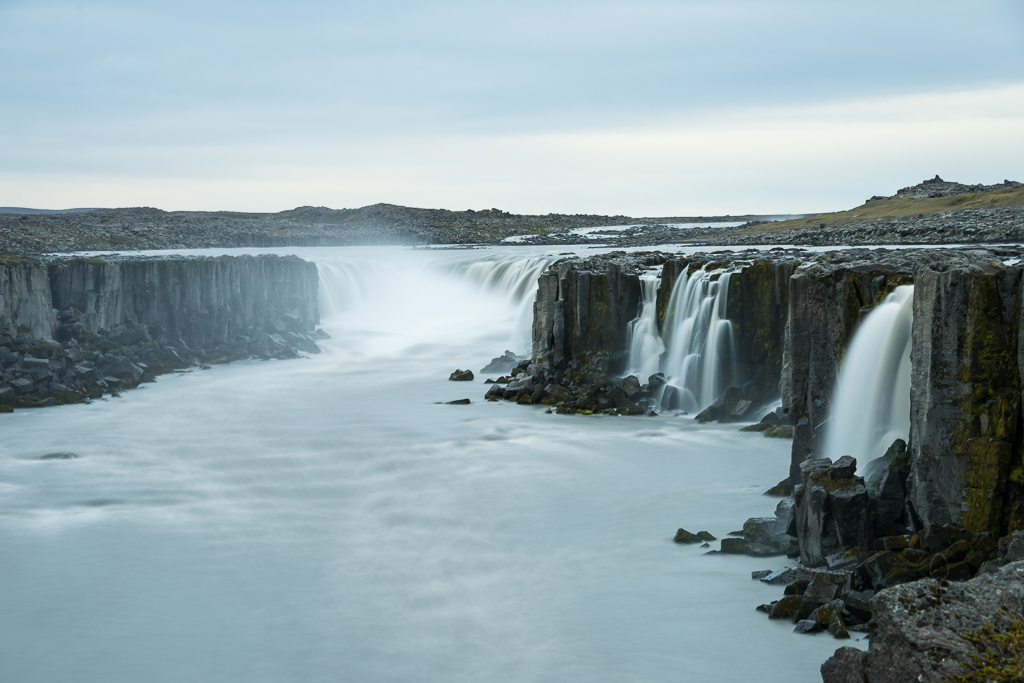 After taking enough photos of Dettifoss, we hiked back and took a detour to see Dettifoss’ little sister – Selfoss. Selfoss is an 11-metre, horseshoe-shaped waterfall located about 4 kilometres upstream of Dettifoss. After seeing and feeling the power of Dettifoss, Selfoss seemed many times calmer (though this doesn’t mean that I will jump into it anytime soon!) Hafragilsfoss is another sister waterfall just 2 kilometres away, but reaching involves rope ladders and steep climbs and since time wasn’t on our side, we gave that waterfall a miss.

Note: Do wear waterproof jacket to keep yourself dry and allow about 2 hours for the whole visit. 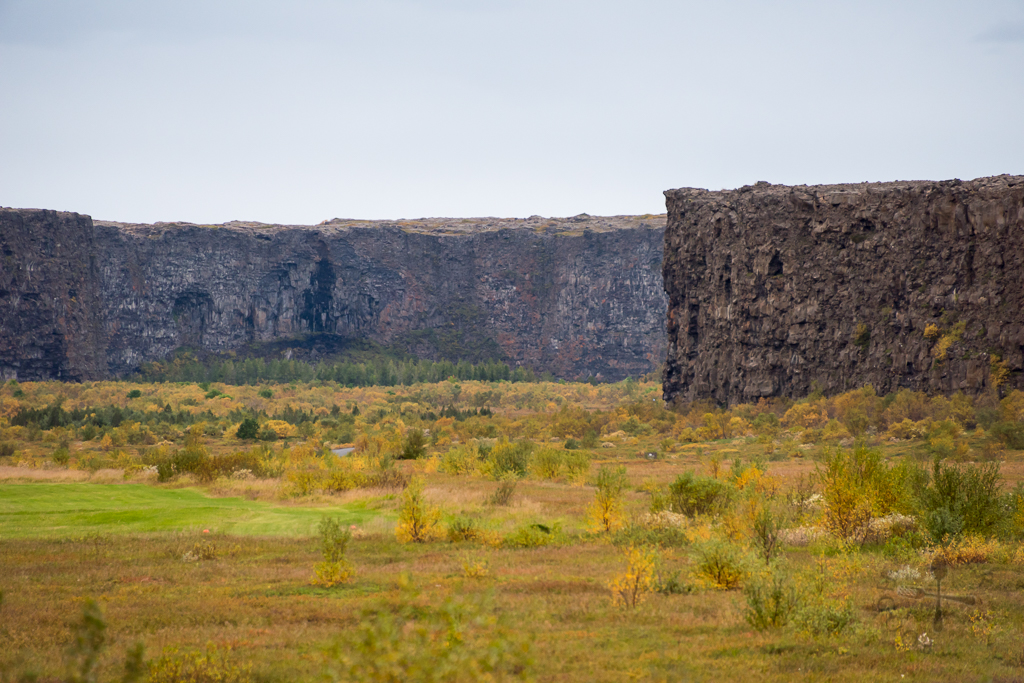 After leaving the waterfalls, we head to Ásbyrgi Canyon on Route 862 – instead of paved road, the road is now a bumpy and winding gravel road with many muddy pot holes (2WD may get stuck inside easily). However, as we were exiting to Route 85, we saw that the locals are making a new paved road, so perhaps by the time you visit Iceland, there won’t be any gravel road on Route 862. We then turned in to Route 861 before reaching Ásbyrgi Canyon. The whole drive took us about an hour and by then the sun is starting to set (means we need to rush to take the photos!) 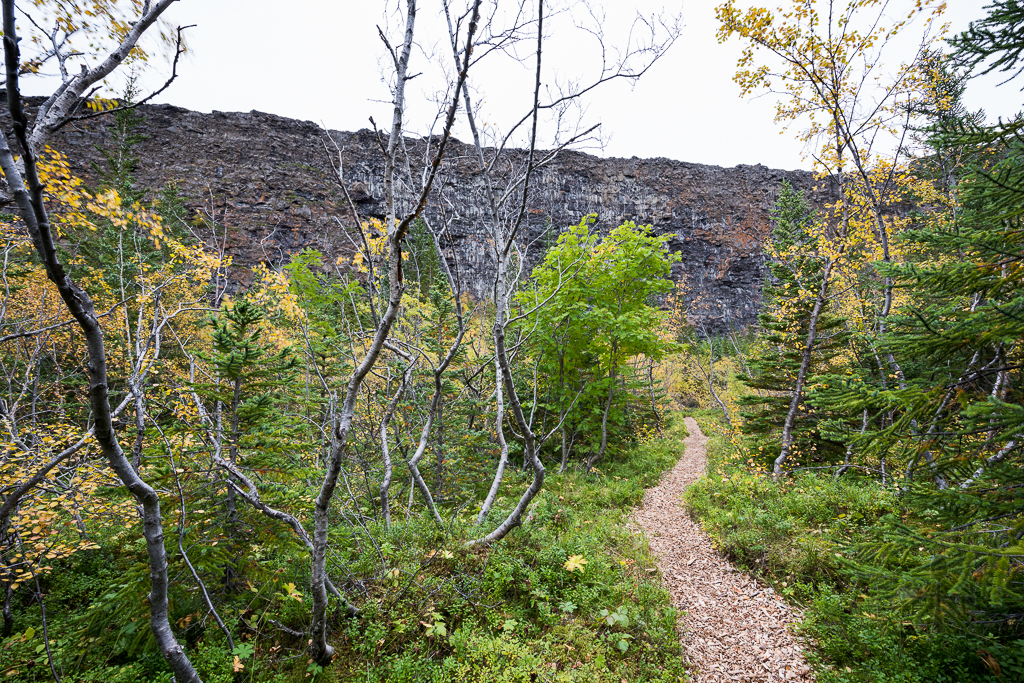 Small hiking path in the woods

Ásbyrgi Canyon is a 3.5-kilometre long and 1-kilometre wide magnificent natural creation with perpendicular cliffs surrounding the canyon reaching up to 100 metres in height. It is thought to be created during a debacle in the river 2 to 5 thousand years ago. In mythology, it was said that Ásbyrgi was created when Sleipnir, Odin’s flying horse, touched the ground with one of his eight hooves, thus creating this horse-shoe shaped canyon. 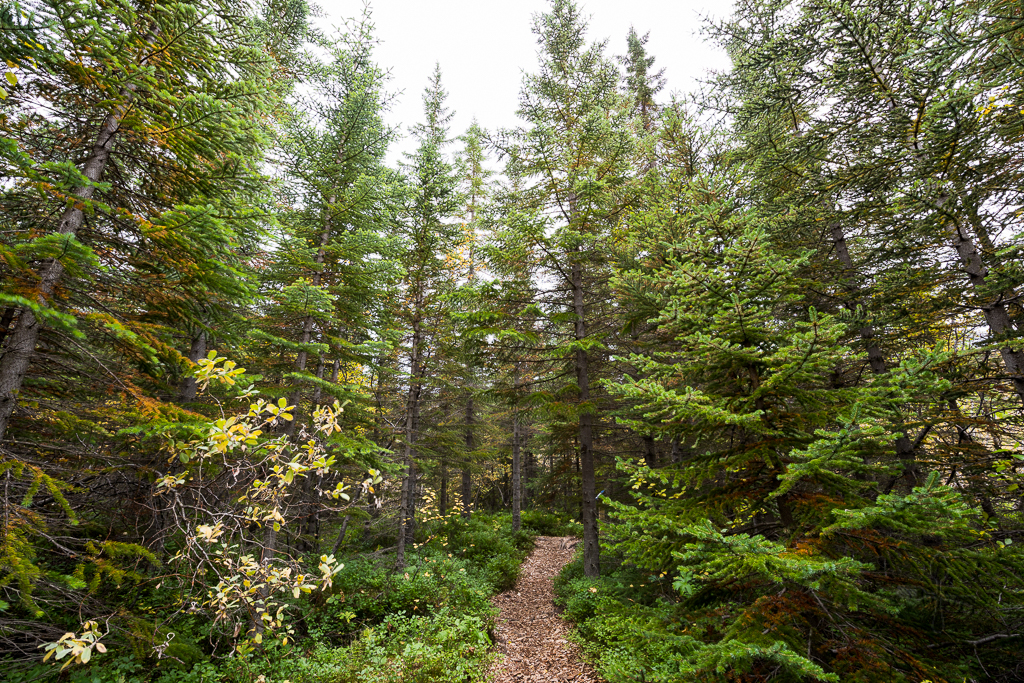 Surrounded by flora and fauna

At the end of the road we reached a small forest-looking site which we hiked and “got lost” in. The hiking path was surrounded by trees, shrubs and flowers – and because autumn is coming, the colours are a mix of green, red and yellow – extremely beautiful! We also saw wild berries but didn’t dare to try them as we were not sure if they are edible. 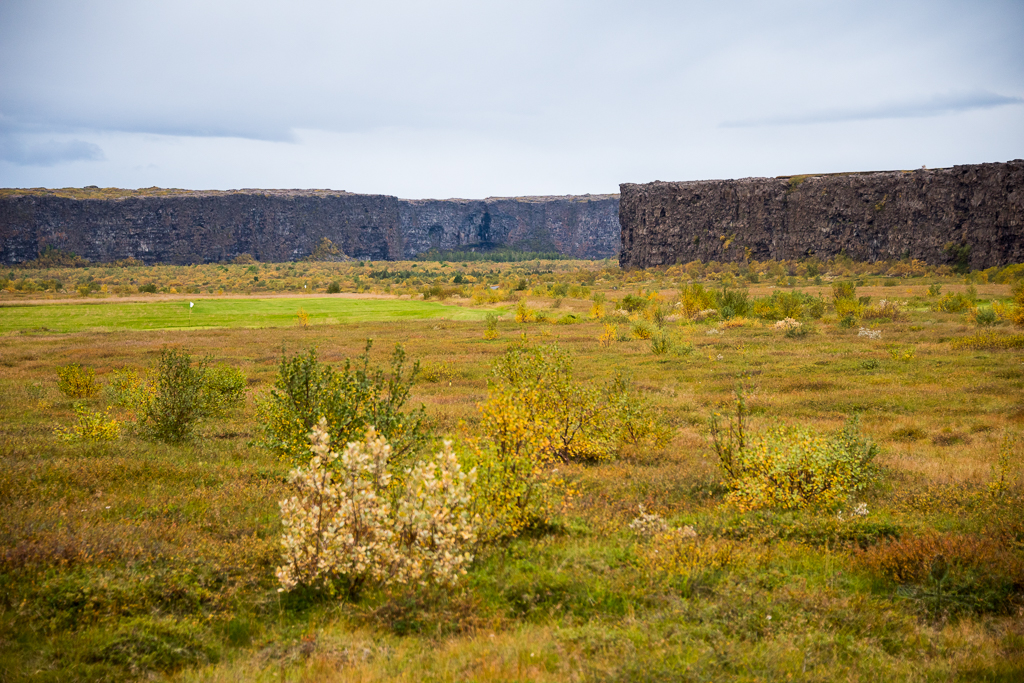 Ásbyrgi Canyon is so massive and impressive that you definitely have to be there yourself to see it and feel how magnificent it is – the photos simply don’t do the place any justice! Apparently there are also plenty of hiking trails here, ranging from 30 minutes to 7 hours – hopefully we will have a chance to hike there again! Below is a video that I had filmed as we were driving out of the canyon: 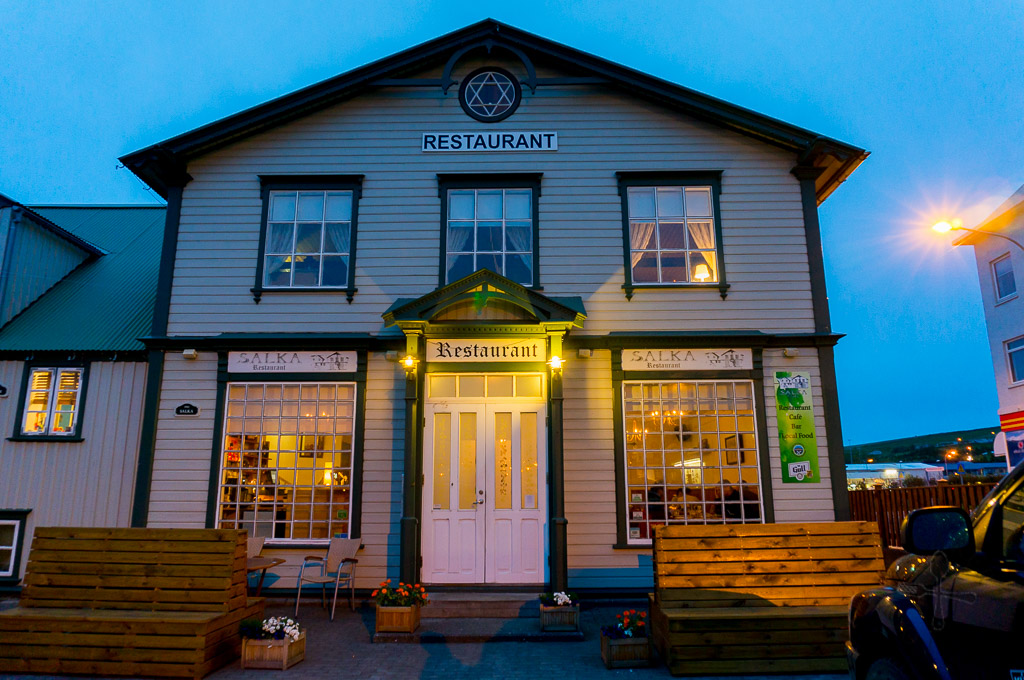 By the time we reached Husavik (after an hour drive), it’s already 7+ in the evening. We decided to head to Salka Restaurant for dinner, which was recommended by TripAdvisor. Starving by then, we hurriedly ordered a soup and two mains. 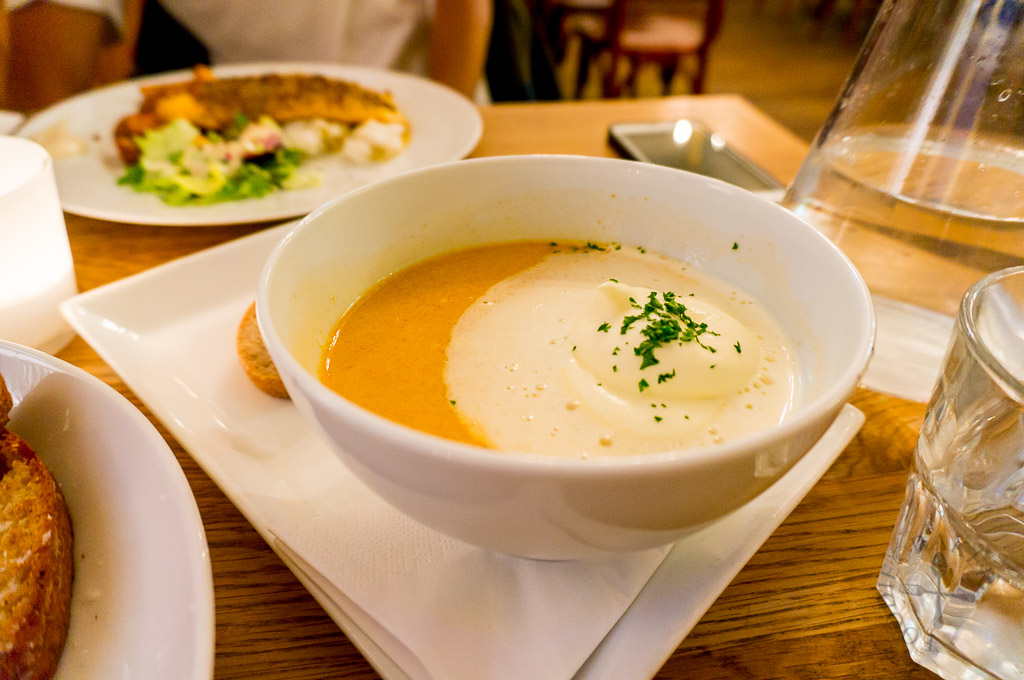 The soup comes with generous portions of langoustine with some scallops and mussels though it’s oddly on the sweet side – not sure if it’s because of the cream but I didn’t enjoy the soup as much as I personally prefer savoury-tasting soups. 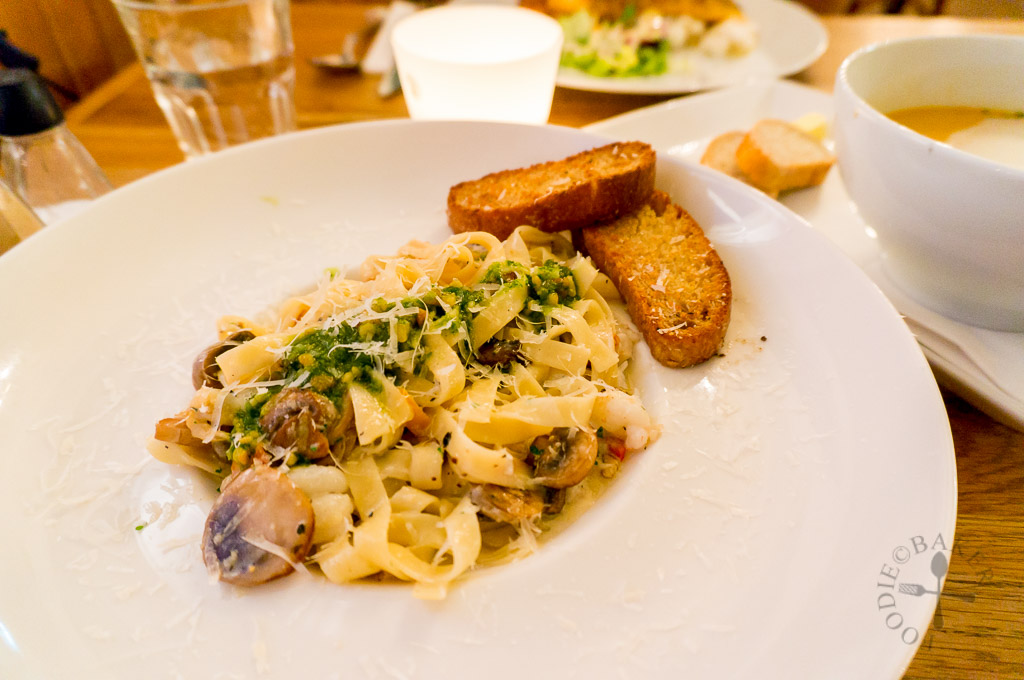 The pasta tasted really creamy and delicious though the truffle oil taste was not noticeable but I love the addition of pesto – will give it a try when I make it myself next time! 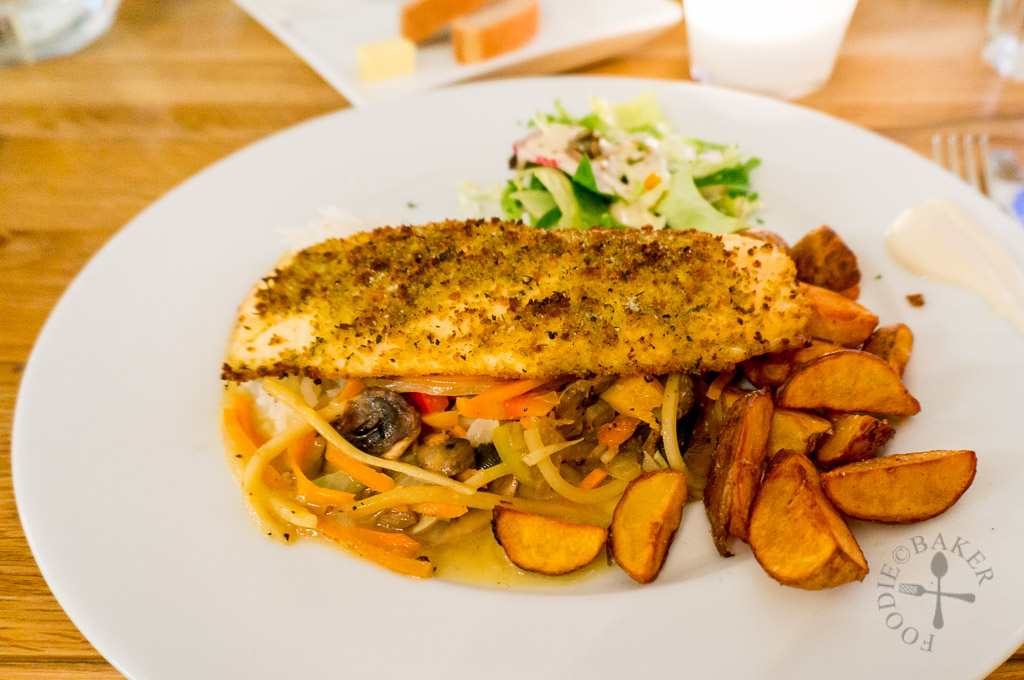 Fish of the Day was pan-fried Arctic char in Parmesan crust, served with rice, salad, sautéed vegetables and lemon-butter sauce – delicious and satisfying!