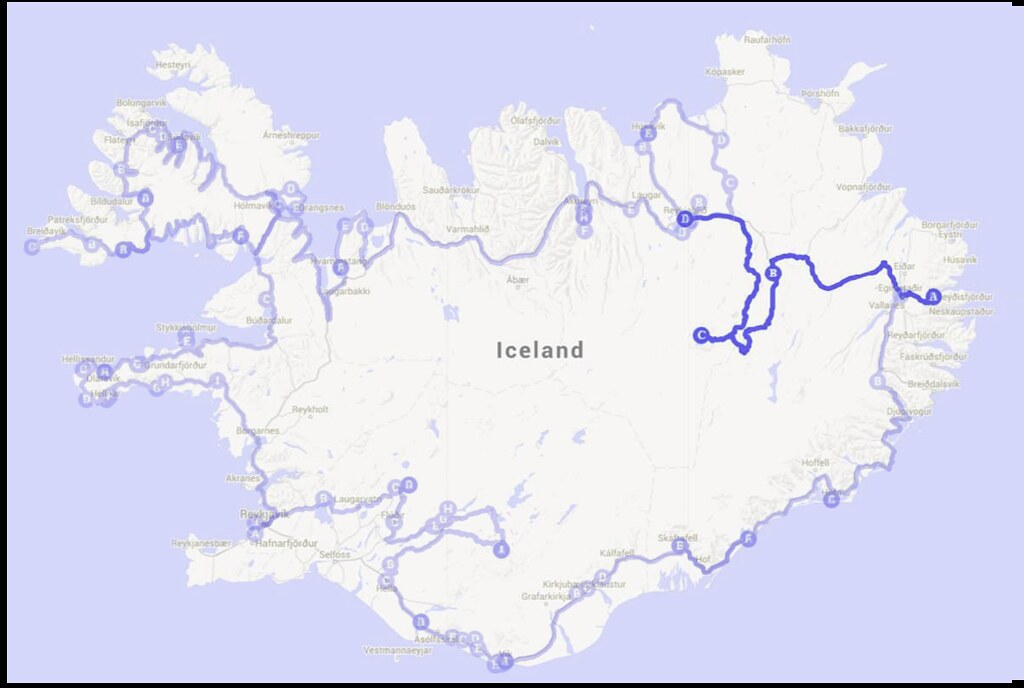 We camped at Seyðisfjörður campsite the previous night and woke up at around 7 a.m. the next day to a chilly 9 degrees Celsius. After a quick breakfast and packing sandwiches for lunch, we head out as soon as we can as we have a long drive ahead today!

On our drive out from Seyðisfjörður, we stopped at Gufufoss, an impressive waterfall that you definitely won't miss while driving to/from Seyðisfjörður. We actually stopped there the previous day (while on our way to Seyðisfjörður) but the sun was setting behind the waterfall, so the backlit photos of the waterfall just don't look good at all - so morning is the best time to visit and photograph this waterfall. We were also really blessed that the weather had cleared up as well, giving us blue skies for the rest of the day!

The word "gufa" meant "steam" or "vapour" in Icelandic, and I guess this name was given because of the mist that's created by this powerful waterfall. The river is apparently good for trout and salmon fishing. Here's a video and the location of the waterfall!

We reached Egilsstaðir once again and headed to the information center for some driving advice to Askja (more on that later on). After another 1.5 hours of drive, we reached Möðrudalur, the highest position farm settlement in Iceland (469 metres above sea level), at around 11 a.m. It is located on Route 901, just a short drive from the Ring Road (Route 1).

Möðrudalur has the cutest petrol kiosk in the whole of Iceland - I mean, just look at the cute wooden houses used to house their petrol tanks! But the petrol is also the most expensive we had pumped in the whole of Icleand - ISK 250 per litre here as compared to ISK 200 per litre in other petrol kiosks. We had to re-fuel our car there as we were going to head into the highlands and there would not be any petrol kiosks in there. Do try to refuel at other places before coming here as sometimes they ran out or have limited amount of petrol / diesel. 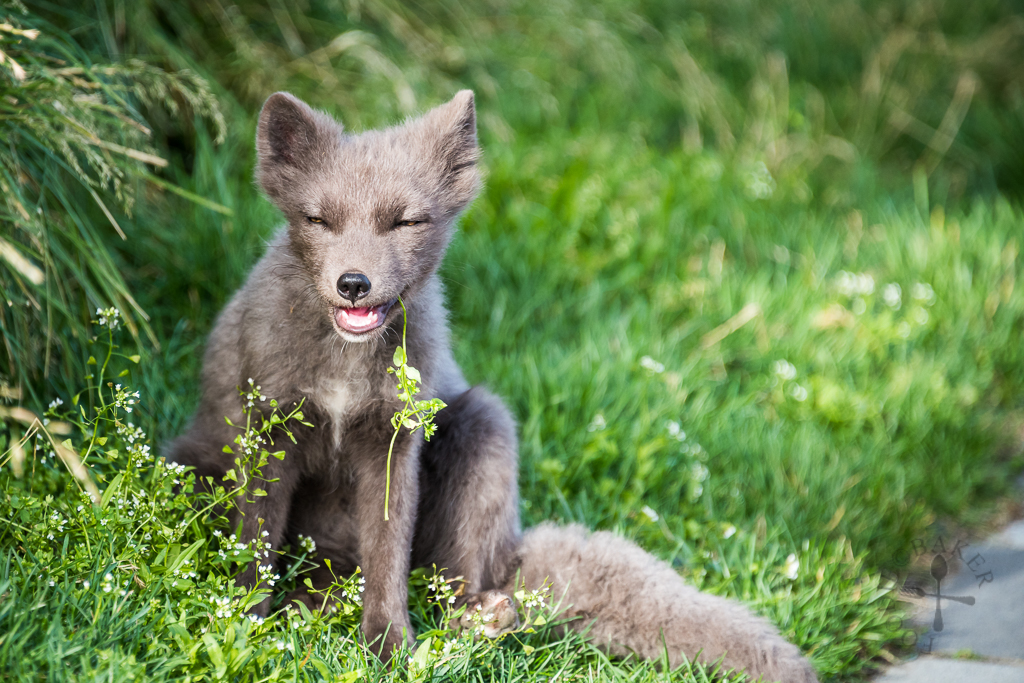 While the car is being re-fueled, I walked around the farmland and spotted a little grey animal darting through the fields - and realised moments later that it's an arctic fox! Apparently there are two resident arctic foxes in Möðrudalur and they are relatively comfortable being around human beings (though they won't let you approach them) because the owners of Möðrudalur farm have been feeding them since they were babies.

Knowing that there's no way we can see them in the wild, we took this opportunity to snap as many photos as we can of them!

The arctic foxes are found in two colour morphs - "white" and "blue". The white foxes is uniformly white in winter, and brown-grey on the back/thighs and yellowish-white on the belly and the sides in summer. The blue morph, which is more common and is the one we saw in Möðrudalur, remains dark charcoal all year round, but the fur will lighten in colour in winter. 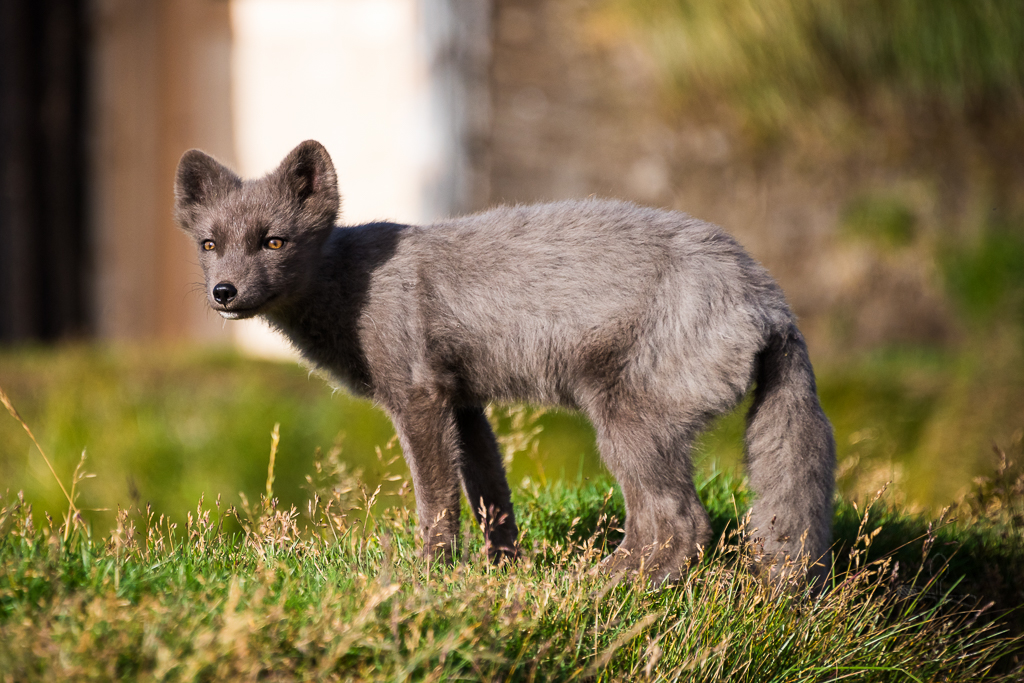 While we find arctic foxes really adorable and cute, farmers in Iceland don't like them as the carnivorous arctic foxes would attack their sheep and other livestocks. Hence arctic foxes are still hunted throughout the country and during winter, "den-hunting" (killing all the animals in a fox den) is still performed in Iceland. 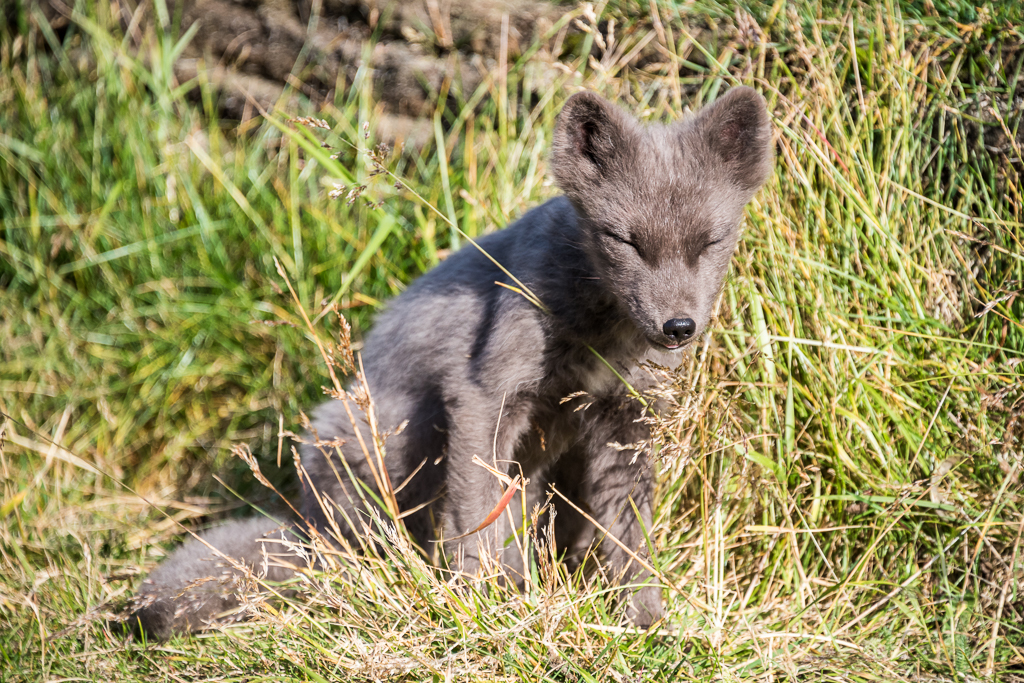 As it was getting close to noon, we decided to leave our new furry friends and head off to Askja. Following the advice we had received at Egilsstaðir, we continued South from on Möðrudalur on Route 901 and turned right onto Route F905. After a long, bumpy and winding drive on F905, we continued onto F910 (an even more bumpy and winding drive) to reach Dreki Campsite (total about 2 hours drive). During the drive, we crossed 2 fords (shallow rivers) and a glacial river (this we crossed via a bridge) - the fords had pretty clear water and the water was not deep, which made crossing them relatively easy. Unfortunately, we didn't take any photos or videos of the river crossings as we thought we would be returning via the same route but we ended up taking another route out of the highlands later on.

Dreki Campsite was already closed for the winter, but there's a public (and stinky) toilet stall not far away from the main huts that you can use.

From Dreki Campsite, we drove another 20 minutes to reach the parking space for the start of the hike to Askja. The hike took us another 30 minutes and it's quite an interesting hike because we first walked through an area that is covered with rocks and pebbles, and then through an ice field to reach Askja.

A caldera is a type of volcanic crater that has a large cauldron-like depression, formed by the collapse of an emptied magma chamber, usually a result of massive explosive volcano eruptions. Askja actually refers to a group of calderas nested within the surrounding Dyngjufjöll mountains.

The Viti caldera lake (or crater lake) is one of Askja's calderas and is filled with geothermally heated water (around 30 degrees Celsius on average) and because of this, it apparently is a popular bathing sites (but we didn't see anyone bathing there that time). In 2014, a rockslide in July 2014 into Öskjuvatn caldera lake resulted in a tsunami, causing the lake water to overflow into the Viti lake. Thankfully this occurred late at night hence no one was injured!

Note: Askja is open only during summer (the F-roads are closed during the winter season). Before you start your drive to Askja, make sure you have enough petrol to drive in and out as there is no petrol station in the highlands. Do also check the road and weather conditions, preferably with the locals at information centers, to make sure it's safe to drive into the highlands. There are also fords to cross when, so if you are not too familiar with it, again, check with the locals. The hike to the crater lakes is about 30 minutes one-way, so prepare to spend about 1.5 to 2 hours at the place!

As Dreki Campsite was already closed for the winter and there were still quite some time before it gets dark, we decided not to camp in the wild but head out of the highlands to Myvatn Campsite. Instead of taking the same route back out to the Ring Road (Route 1), we took Route F88 instead as it's a shorter route out to Myvatn (125 kilometres vs. 160 kilometres). The drive on Route F88 is also a bit smoother and less bumpy than on Route F905.

Route F88 is definitely a scenic drive as besides driving past massive lava fields, we also past by an oasis, Herdubreidarlindir, which is stunningly beautiful. The oasis are created by the springs from under the lava fields, which is the source of life for over 72 species of vascular plants. There's a mountain hut which opens only during summer and is the starting point for Öskjuvegurinn, a tough 5-day trek! 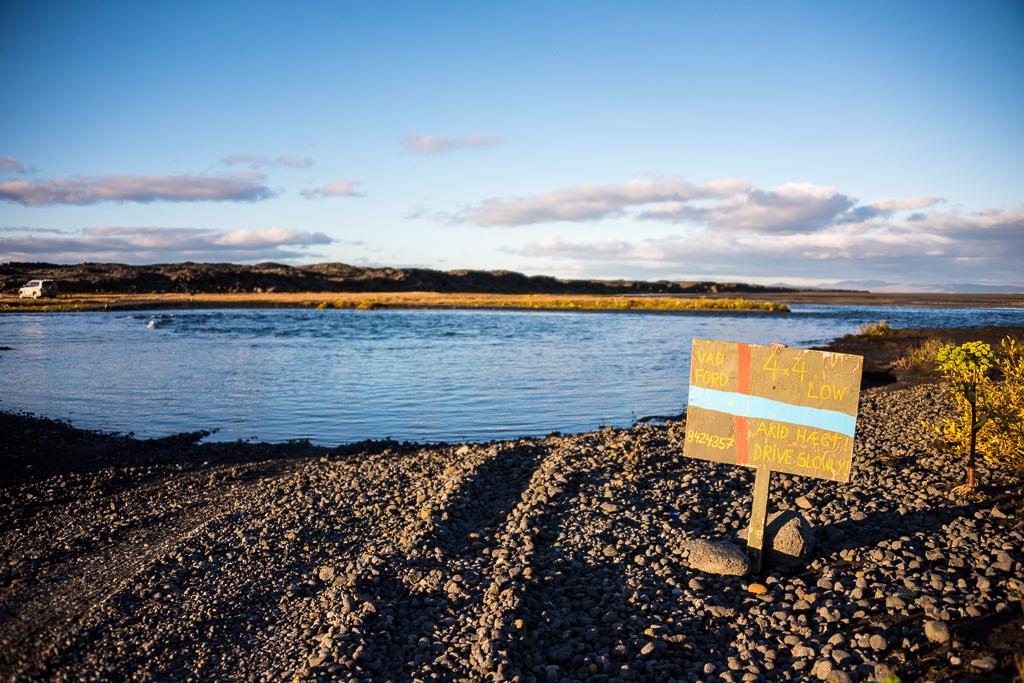 The lady at Egilsstaðir information center informed us that the fords on Route F88 are more difficult to cross - and indeed they are deeper than the ones we had crossed at Landmannalaugar and when we came into Askja. We crossed a total of 3 fords and for one of them, we observed another 4WD crossing the ford before attempting it ourselves as the ford looks a tad deep. Below's a video of the ford-crossing if you are interested!

We reached Myvatn Campsite (65.640243, -16.915089) at around 7.30 in the evening, and there's already quite a lot of travellers there. Myvatn Campsite is a popular campsite as it is located along the Ring Route (Road 1), It is situated just next to the Myvatn Lake so the view is absolutely gorgeous as well. There are 2 shower and toilet houses (one closer to the main building, one in the campsite) and both are shared and has free flow hot water. Taps and sinks with hot water (hooray!) for washing dishes can be also be found throughout the campsite. There is also a large kitchen tent equipped with tables, chairs and gas stoves, but you will need matchsticks or lighters to light the stoves. Perhaps because of its popularity, the camping fee is also one of the most expensive, at ISK 1,600 per pax per night.

One thing that bugs me (literally) was the amount of flies in the area around Lake Myvatn. These flies, aka black flies or midges, are common during summer in Lake Myvatn and are an abundant food source for both the fishes and the ducks. They are harmless (don't sting, don't bite etc) but they can be a tad annoying as swarms of them buzz around you or try every mean to get into the car. But of course, don't let these bugs deter you from visiting Lake Myvatn! It's a beautiful place which I will talk more in later posts.

Just a fun fact before I end of this post! Do you know that there are no mosquitoes on Iceland? (; Stay tuned for the next travelogue!