Landmannalaugar lies in a valley bounded by colourful hills and surrounded with lush vegetation. It was declared a protected area in 1979, forming part of Fjallabak Nature Reserve. Every summer from June to late September, travellers flock here in cars and buses to hike around the area - the hikes can last from 1 hour to 4 hours to even 4 or 5 days!

One will need to travel on the F-roads to reach Landmannalaugar, so rental 2WDs are not allowed on these roads as their insurance do not cover the damage incurred while travelling on F-roads - this was why we rented a 4WD instead. As we came from Háifoss, we drove to Landmannalaugar via Route 32, then continued straight onto Route F26, kept right onto Route F208 and finally turned right onto Route F224. When we left, we took Route 26 as it's nearer to our next destination. One tip is to download the offline Google map onto your smartphone first for navigation as the reception is pretty poor there. (GPS signal will still work even when there is no data.)

There are 2 small rivers to cross before one can reach the Landmannalaugar campsite (63.990629, -19.060709). If you are driving a 4WD, it shouldn't be a huge problem - we had no experience driving through rivers so we just waited until we saw how others did it before trying ourselves. Looking back, these 2 rivers are actually pretty shallow - we actually crossed a deeper river later during our travels.

If for some reason you can't drive your car over, there is a bridge for people to cross, so you can park on this side and bring all your stuff and walk over to the campsite via the bridge.

There are also buses that leave from Reykjavik to Landmannalaugar (and vice versa) daily, an option for those who don't drive. You can check out the bus timings here.

We stayed in our 4WD, so we paid ISK 1,600 per person per night (SGD 6.60; €4.20), which includes the use of toilet and shower facilities. I think the price for 2016 may have increased as I noticed on the website that it's ISK 1,800 now. There are also plenty of places to pitch tents if you brought a tent along. There is also a cabin with sleeping bag accommodation - the cabin consists of a kitchen which can only be used by those who are staying in the cabin (identified by blue wristbands). Do note that the shower facilities included in the price is only for cold water shower only. An additional ISK 500 is needed for 5 minutes of hot water (you insert the coins in the machine in the shower cubicle and hot water will flow out for 5 minutes - there's no way to pause the hot water so shower fast!)

Here are some items that one should prepare when planning a trip (especially when staying overnight) to Landmannalaugar: hiking boots, waterproof windbreaker and thin and thick jackets (weather in Landmannalaugar is unpredictable), sleeping bag, sunscreen, swimwear (if you are planning a dip in the hot spring), food (to cook and to snack on during hikes), water tumblers (cold water can be refilled at the campsite).

What to do in Landmannalaugar

Hike, of course! I met a traveller a few days after we left Landmannalaugar and while chatting with her, she told me that she and her friends hiked the 55-kilometres Laugavegurinn hiking trail in Landmannalaugar, which was a really amazing feat. I'm not sure if I have the strength and determination to do this kind of hike and I guess X knew me so we only did short one-day hikes around the campsite.

We started Day 4 (after our breakfast) by hiking up to Mt. Bláhnjúkur, wherby "Bláhnjúkur" means "Blue Peak" in Icelandic. The hiking path is located behind the campsite - there is no sign post or marked path to indicate the start of the hike, so watch out for paths left by previous hikers.

The path is made up of a mixture of sand, ashes and rocks which are pretty loose, which makes the climb harder as I kept finding myself sliding back down one step every three to four steps. The path up is also winding and cliff-hugging with no railings for support - not for those who are afraid of heights!

We finally reached the top after 1.5 hours of hike - and the view was so spectacular that any difficulties we experienced on the ascend were soon forgotten. I'm not very good with words so I'll leave you with the photos!

We had a sandwich on the peak of Mt. Bláhnjúkur (best place to have lunch!) then head down towards Mt. Brennisteinsalda. There are two ways down (three including the way we came up from), one was a shorter but steeper route, while the other route was longer but gentler. The weather at Landmannalaugar was unpredictable - it was bright and sunny with clear skies when we were on Mt. Bláhnjúkur, but it became really windy as we descend, sometimes we had to crouch low as we felt that the wind could sweep us off our feet!

Landmannalaugar is a magical and beautiful place - words can never justify the beauty we had seen there. At Mt. Bláhnjúkur, we were surrounded by mountains and ice caps, and the terrain was a mixture of soil. But after we descended Mt. Bláhnjúkur and were on our way to Mt. Brennisteinsalda, the mountains gave way to lava fields - lava from volcano eruptions many years ago cooled and hardened, forming irregular, odd and weird-looking lava "rocks".

As we reached the base of Mt. Brennisteinsalda, we passed by a fumarole, emitting stinking and pungent sulphur fumes - though not as bad as the one we had experienced in Mt. Ijen in Indonesia. 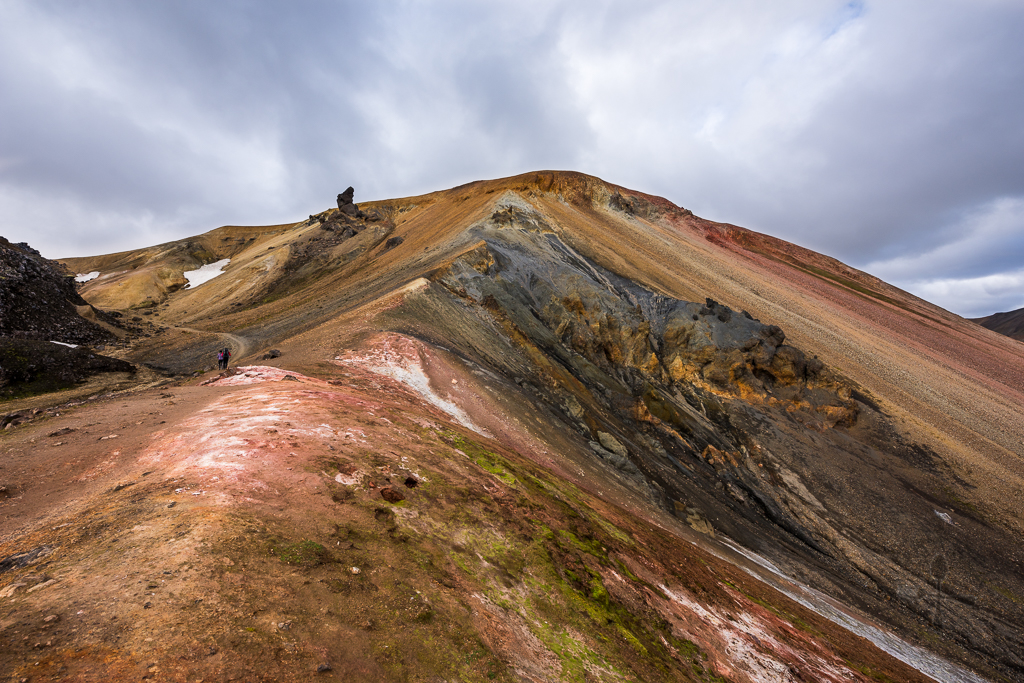 Brennisteinsalda means "sulphur wave" in Icelandic, and this mountain appears in books and calendars often as it is a beautiful and colourful mountain. Its varied colours are contributed by different elements - yellow from sulphur, green from moss, black and blue from lava and ashes and red from the iron in the earth. The climb up is pretty steep as well, and my energy level was running a little low. 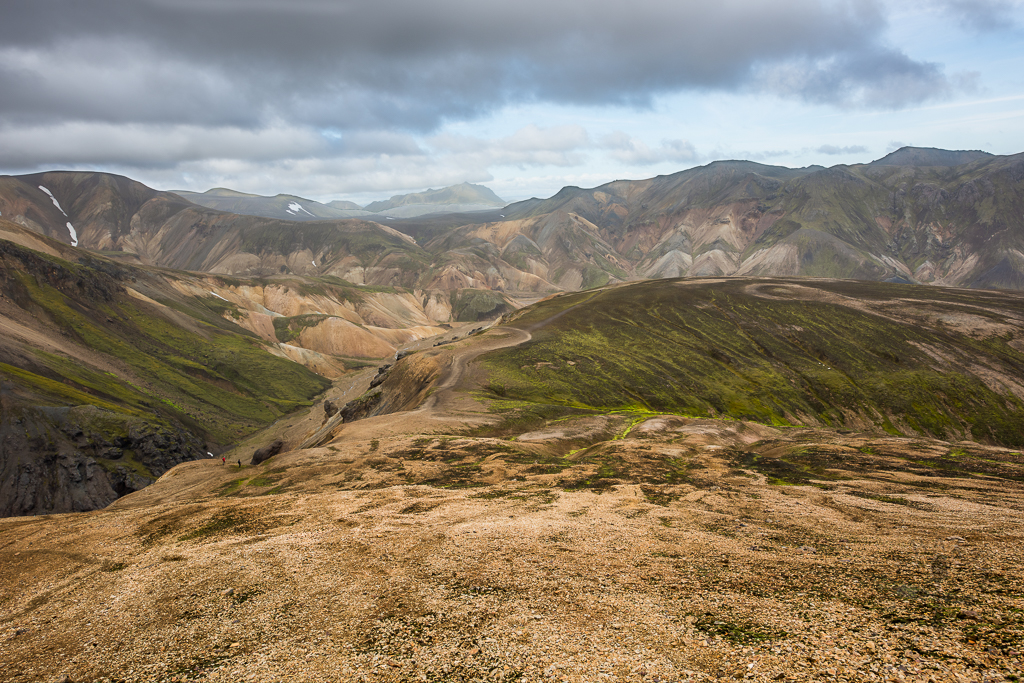 We didn't dare to stay long on Mt. Brennisteinsalda as dark clouds were looming and the winds were picking up speed. 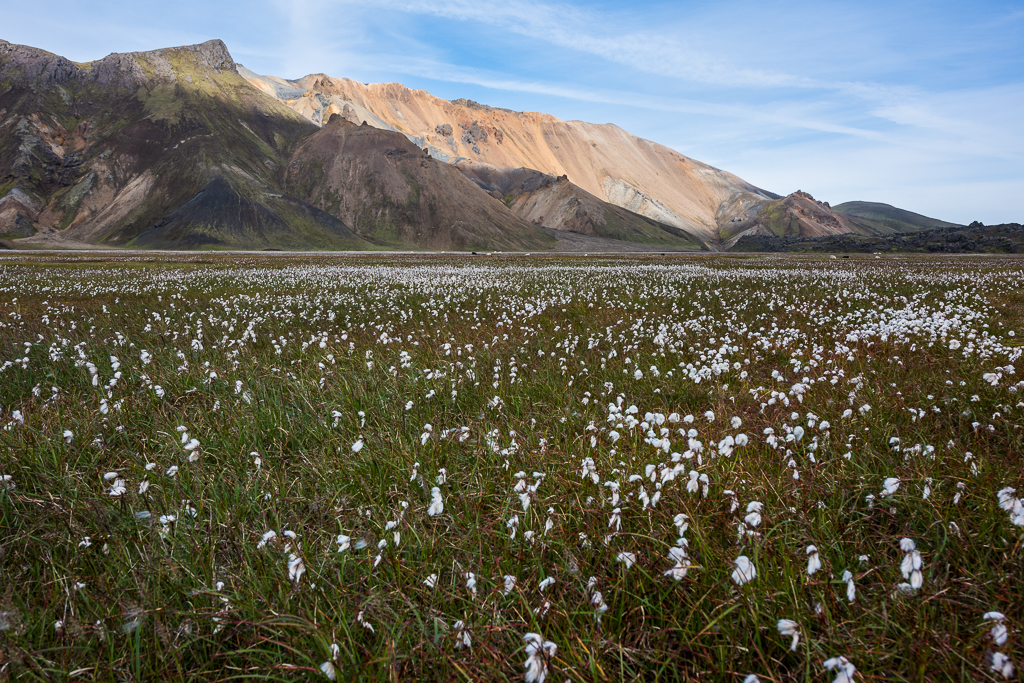 When we reached the foot of Mt. Brennisteinsalda, the view was once again changed - we were now surrounded by greenery. Huge fields of cottongrass greet us, together with some sheep!

Icelandic sheep are usually terrified of people, so we used a zoom lens to take photos of them. I think they were too busy nomming away to notice us taking photos of them! 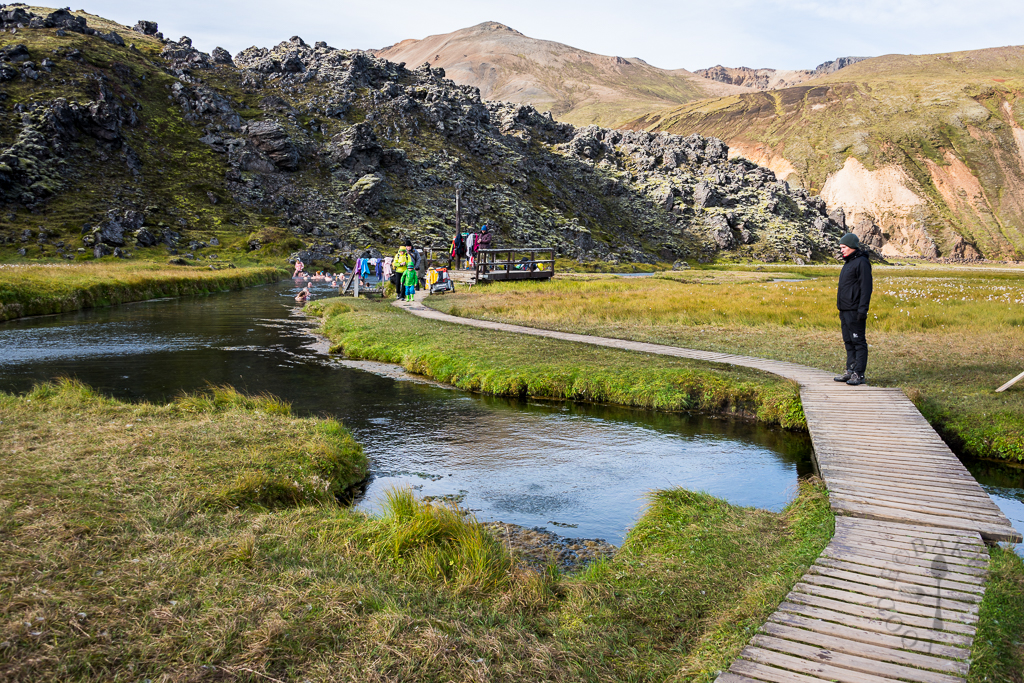 We reached back the campsite cold, tired and hungry. We contemplated taking a dip in the hot spring nearby but I'd rather take a hot shower and get ready for dinner. We had to cook outdoors as the service house with an equipped kitchen is reserved only for guests who are staying in that service house. It's not very comfortable cooking outdoors as the wind can be so strong that everything is threatening to fly away. We stayed one more night in Landmannalaugar and head out early the next morning to continue our Iceland travels - which I'll continue in the next post, till then!