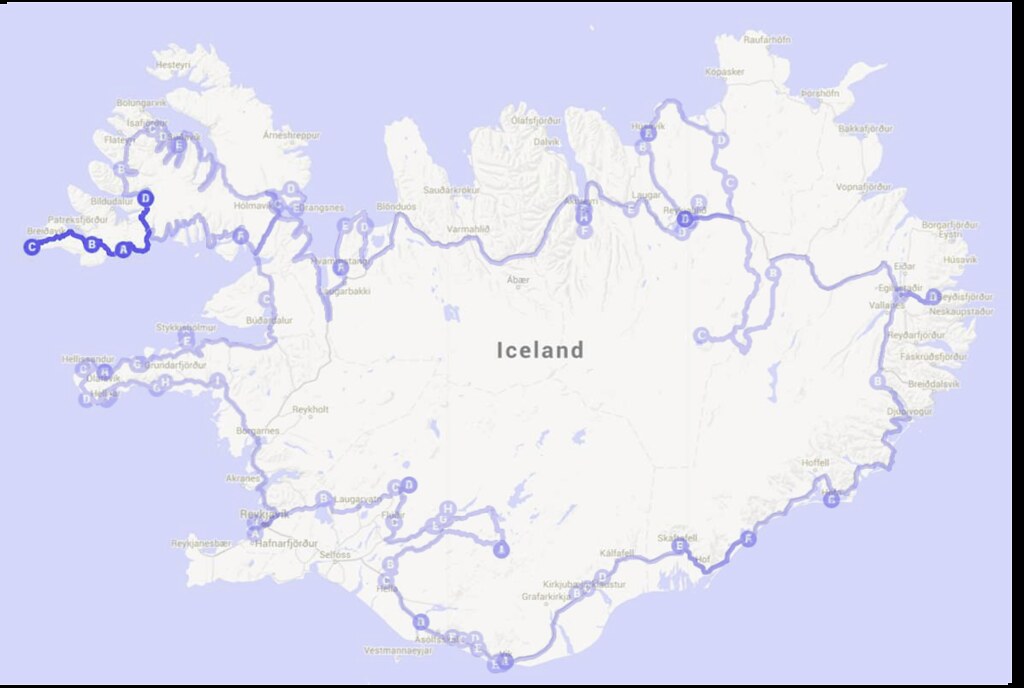 We are now at Day 17 of our Iceland travelogue! We were generously hosted by Ásgeir the previous night and was invited to join his and his family for breakfast. After a hearty breakfast, a good chat and hugs, we continued on our Iceland trip.

P.S. This is a scheduled post as I’m currently away on holiday! Thank you for visiting and my apologies as I won’t be able to visit your blogs during this period. Do follow me at Instagram (@foodiebaker) to see what I am up to in Switzerland! 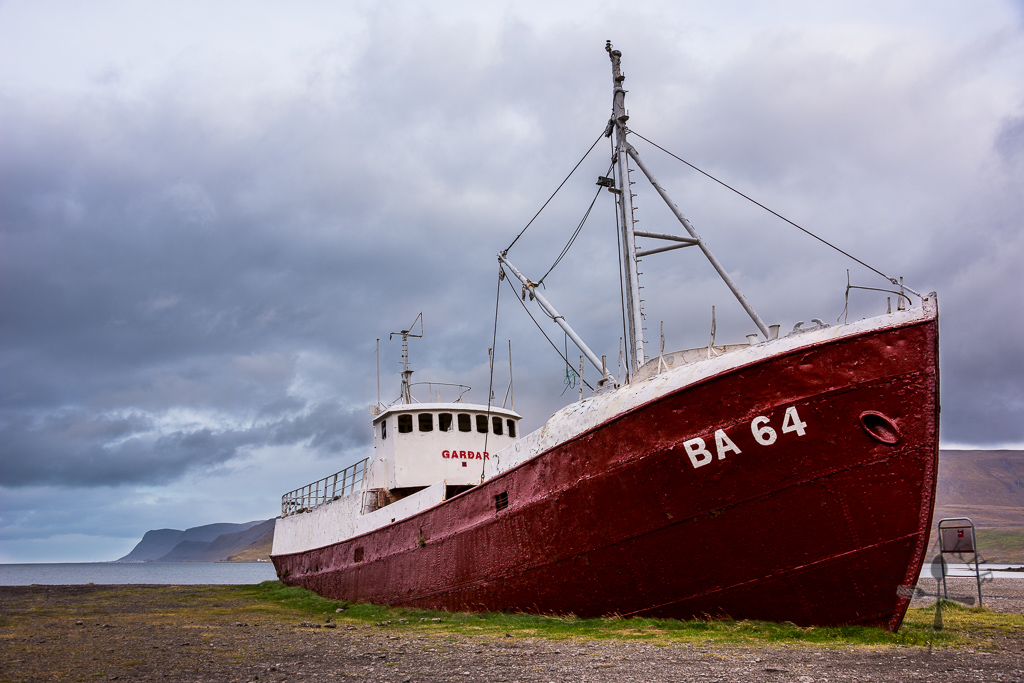 We continued driving on Route 62 then turn left onto Route 612. It took us about 30 minutes before we reached our first stop – Garðar BA 64.

The ship, originally named Globe IV, was launched as a whaling vessel in Norway in 1912, the very same year that Titanic crashed and sank in the North Atlantic Ocean. The massive ship changed owners and its name several times until 1963, when it was given the name Garðar BA 64. Garðar BA 64 was decommissioned in December 1981, but instead of sinking it into the sea which was the norm, it was rammed ashore in Westfjords, becoming the oldest steel ship in Iceland. 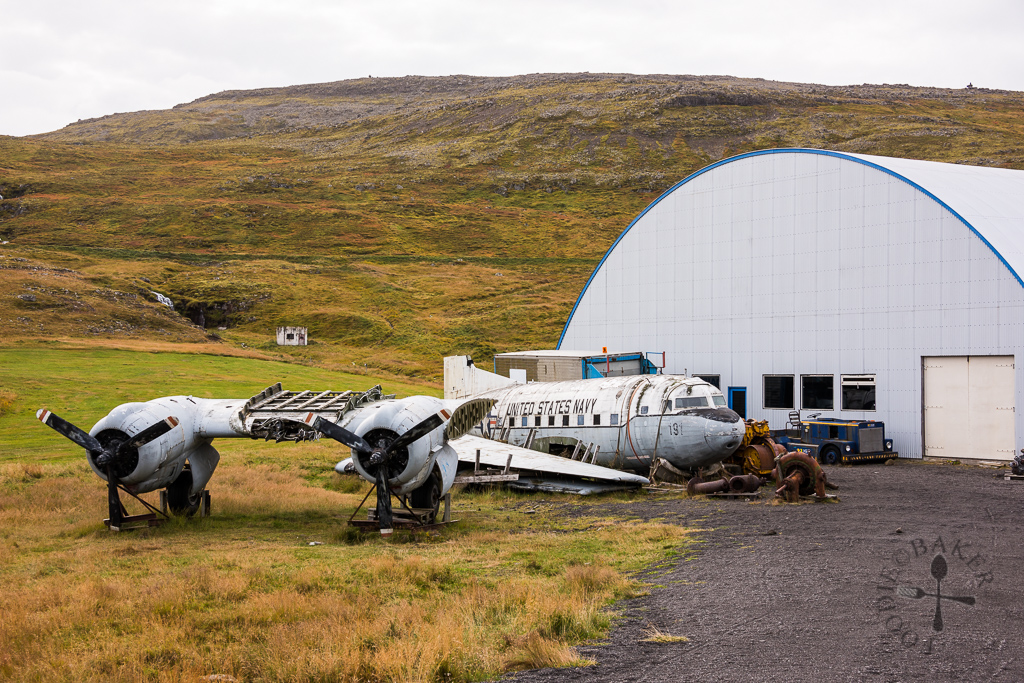 From Garðar BA 64, we continued on Route 612 for another 20 minutes of cliff-hugging drive before reaching Hnjótur Plane Museum. We didn’t head in for a look but just took a photo of a cool-looking, old US Navy Douglas C-117D that was laying in ruins. Apparently the plane was received as gift from the US military when they stationed in Iceland. 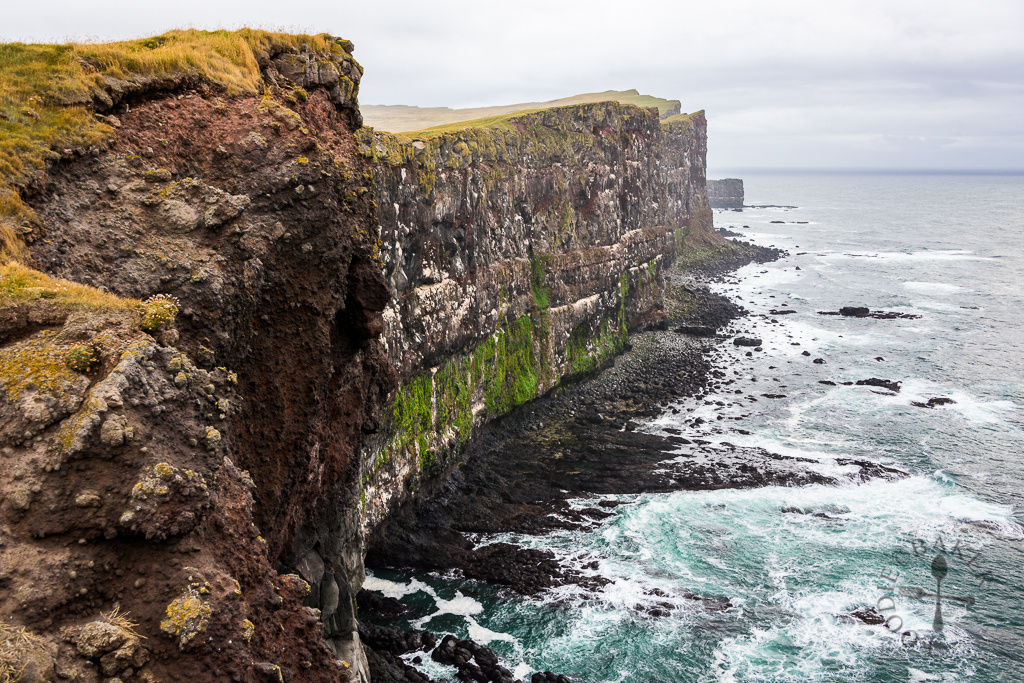 Látrabjarg is the westernmost point in Iceland and largest bird cliff in Europe, measuring 14 kilometres long with an area of 3.5 square kilometres. It took us about 30 minutes to reach Látrabjarg from Hnjótur Plane Museum.

Ten species of seabirds, such as guillemot, razorbilled auk, puffin, fulmar and kittiwake, nest on Látrabjarg, and an estimated one million of birds live on the cliffs. Every summer, Látrabjarg will be crowded with birdlife and every ledge and rock will be seated by birds. As it was already autumn when we reached there, we didn’t spot many birds. 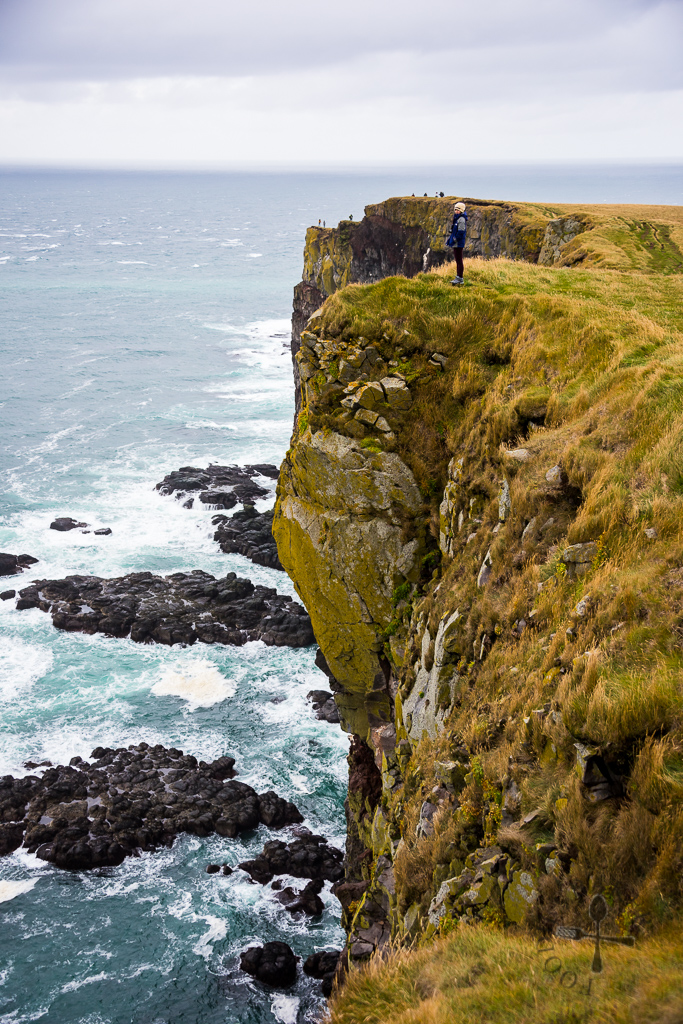 Egg gathering and bird hunting were carried out in the past as they were important sources of food for people living in the area. Men would either lower themselves down the cliff using ropes (known as rappelling) or climbed up the cliff face from the beach to gather eggs and hunt birds. It was an extremely dangerous task which resulted in frequent accidents. After two men died on the cliffs in 1926, the activities were largely stopped, only a few farmers in the area still engage in these activities.

Note: Do wear a windbreaker and be careful of the strong winds there! 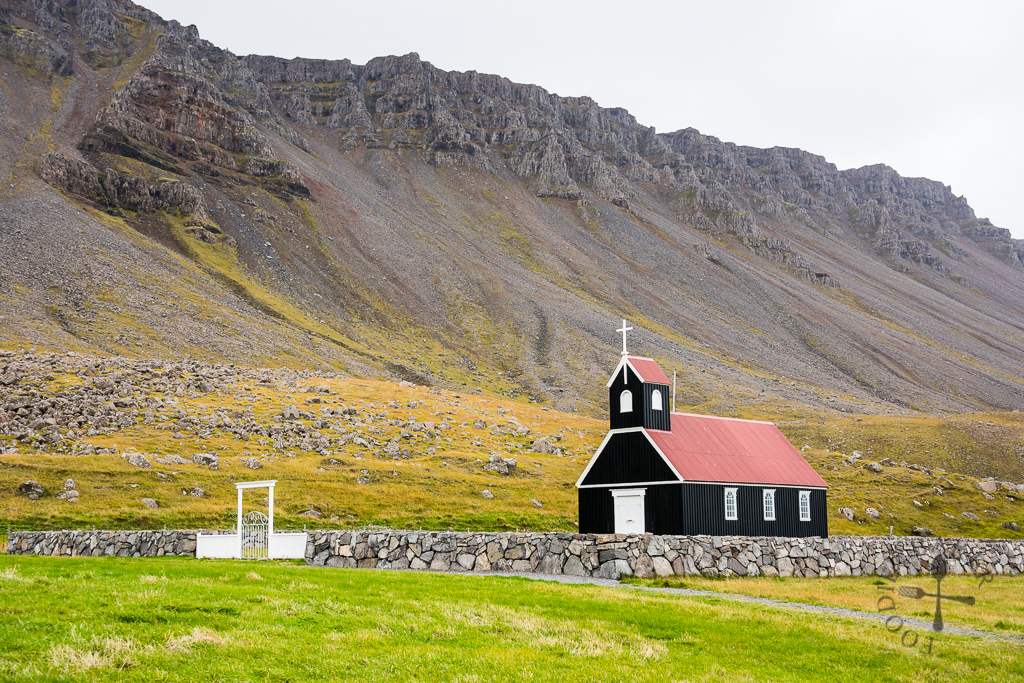 Leaving Látrabjarg behind, we started our 1-hour drive to Rauðasandur, a 10-kilometre red sand beach. We backtracked on Route 612 then turned right onto Route 614. The red sand beach was a long walk in from the main road, with the road laden with lots of “bombs”, i.e. sheep droppings. 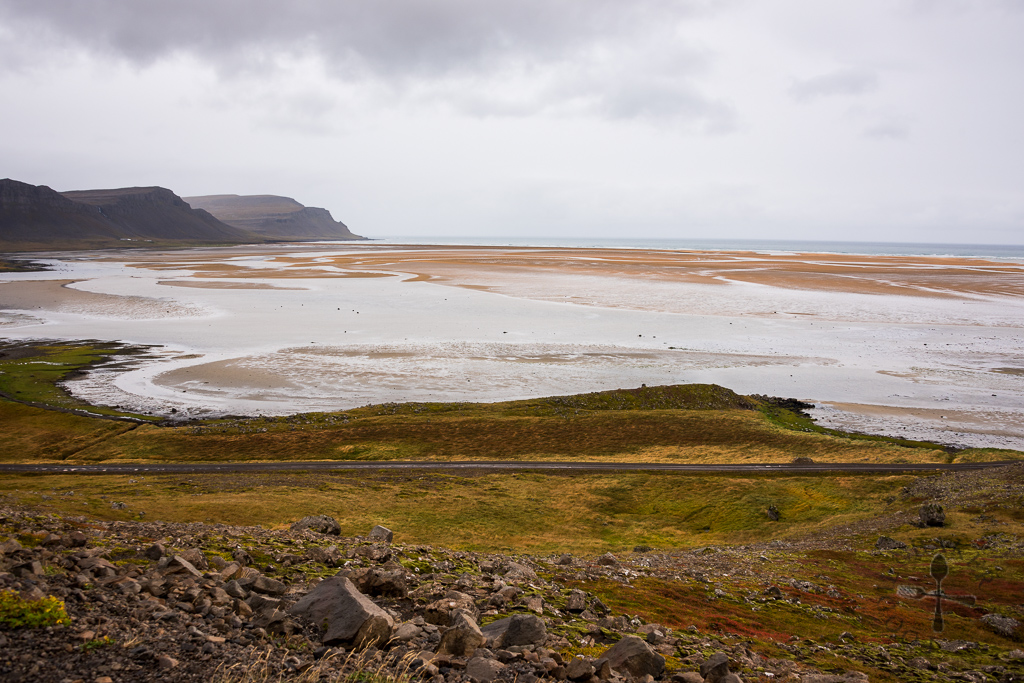 Not sure if it’s because of the gloomy cold weather, the long walk in, or because the lack of things to see, but unfortunately we weren’t very impressed by Rauðasandur. The beach looked nicer if viewed from the top. 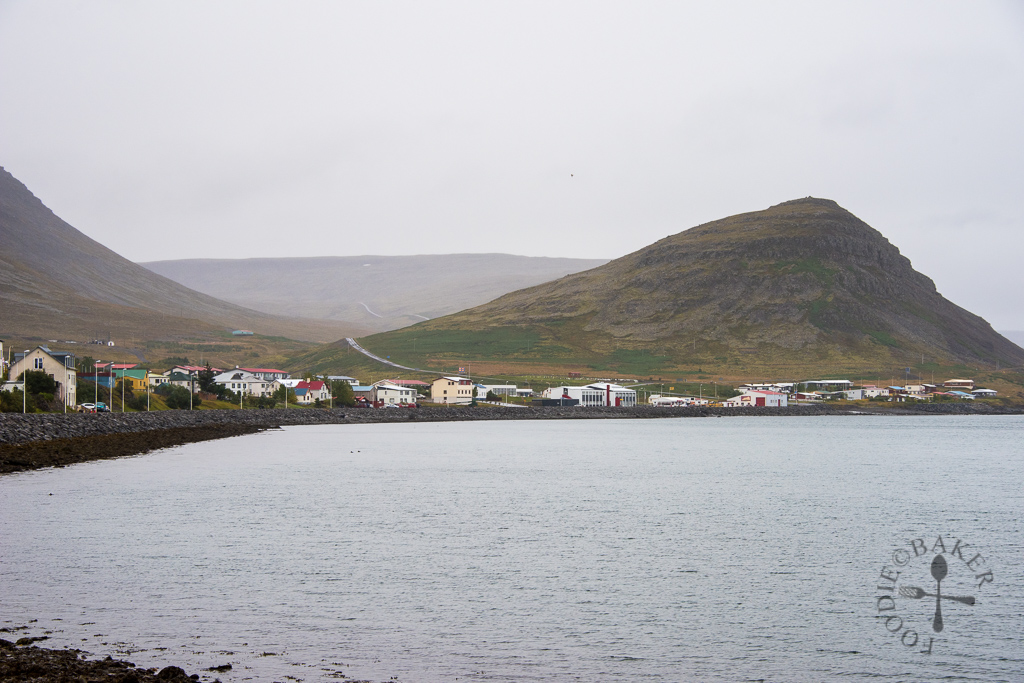 We left Rauðasandur slightly after 2p.m. and head for Dynjandi. Instead of going back the same route to reach Dynjandi (in which we would passed by Innri-Múli farm), we went by Route 63 so that we would not see the same scenery. We stopped by Patreksfjörður to refuel our car and bought a bit of groceries and snacks at the minimart there. 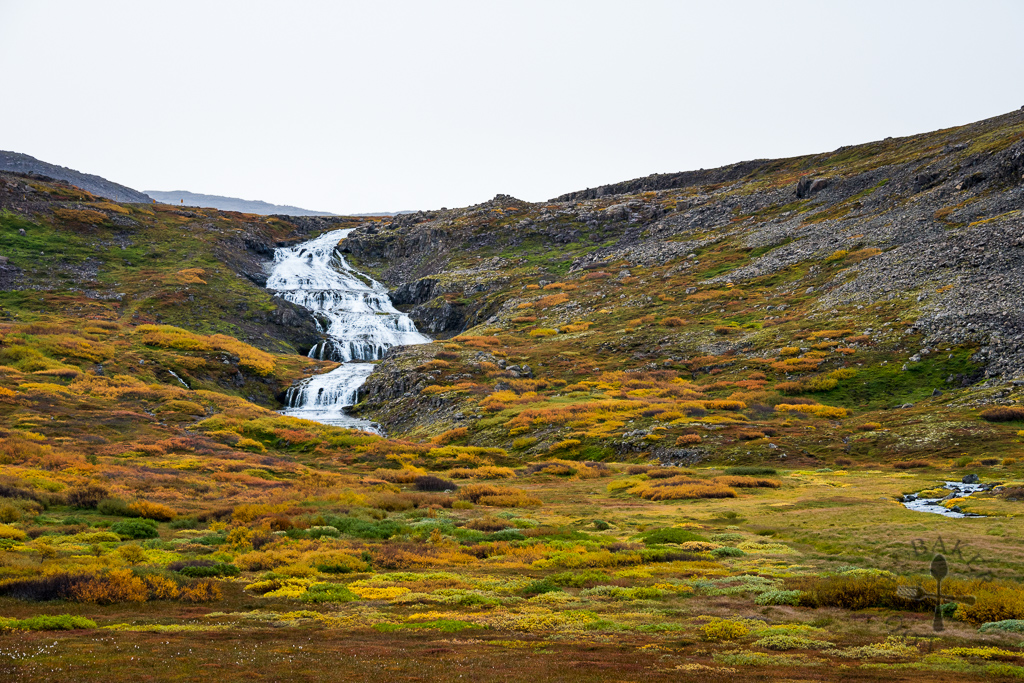 Passed by a waterfall along the way to Dynjandi 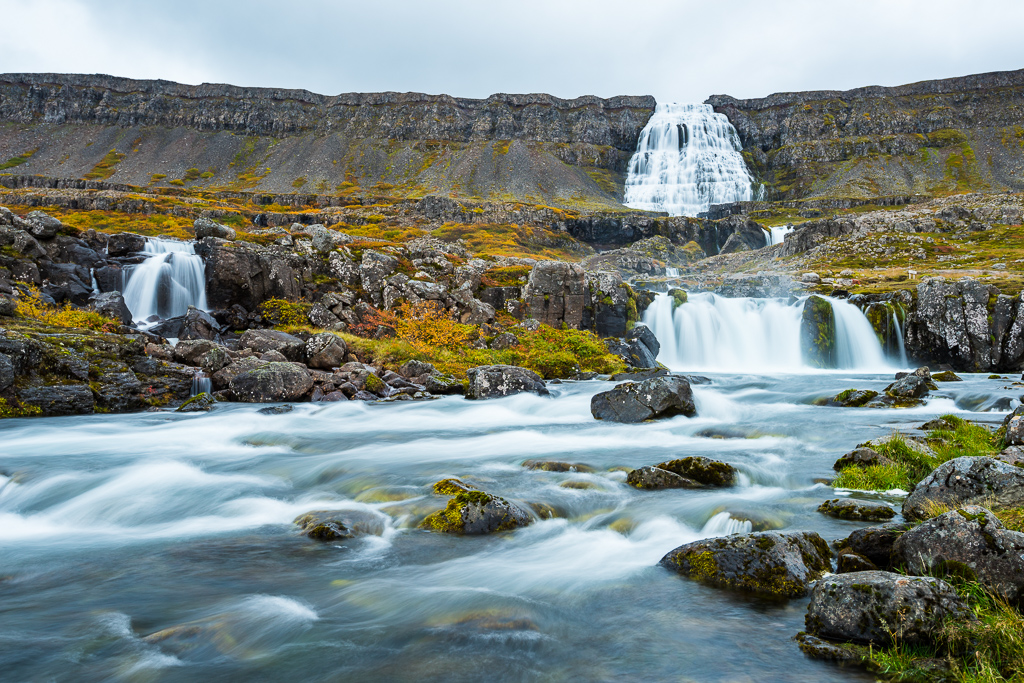 It took us about 2 hours (including our pit-stop at Patreksfjörður) from Rauðasandur to reach Dynjandi. Dynjandi means “thunderous” in Icelandic, and with a drop of 100 metres, it’s not difficult to understand why it’s given this name. Below Dynjandi there are 6 more small waterfalls named Hæstahjallafoss, Strompgljúfrafoss, Göngumannafoss, Hrísvaðsfoss, Hundafoss and Bæjarfoss. Collectively, these 7 waterfalls create one of the most unique and spectacular landscapes in Iceland.

A man-made path was built in 1996, which allowed visitors to hike up to Dynjandi. It took us about 20 minutes to hike up the slightly steep and wet path, then we spent some time taking in the majestic falls and shooting lots of photos before hiking back down. 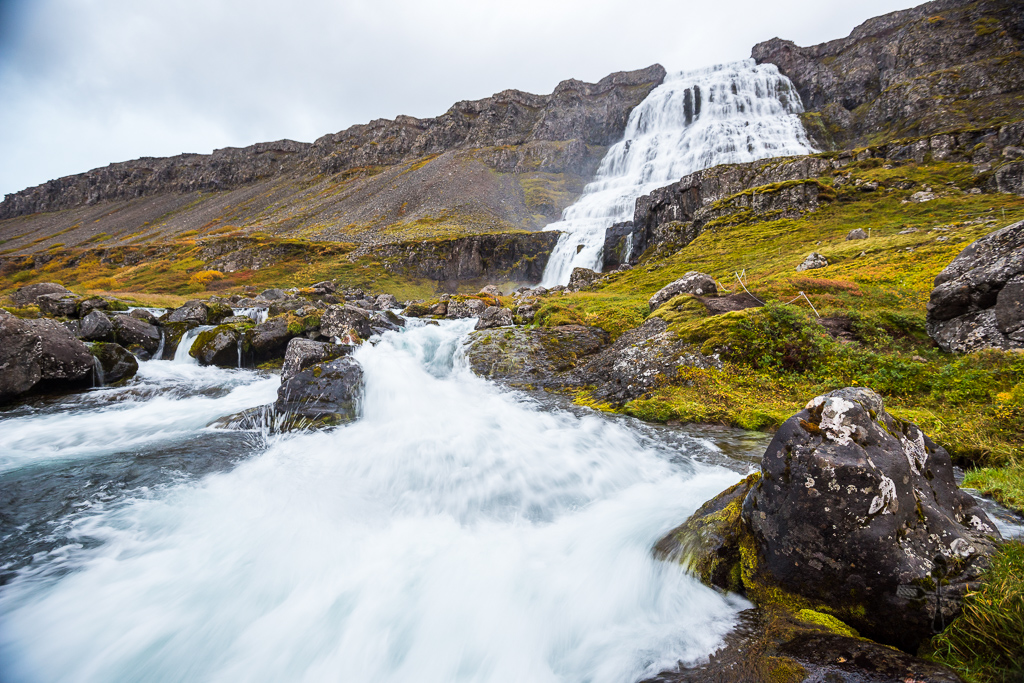 There’s a free campsite right at Dynjandi – only toilets and sinks are available, no service house or other facilities. We decided to camp there for the night as it was getting dark by the time we finish taking all the photos. The toilets were locked (probably closed for the season) so we couldn’t use them, but luckily the sinks were located outside the toilets so we could refill our water, cook and wash up. It’s not the best campsite in terms of facilities, but it’s got to be one of the best in terms of views! Below is a video of the Dynjandi (not very good quality as I had to bump up the brightness) and I’ll see you again in our next travelogue! (;

Note: The hiking path is slightly steep and can be wet due to the water from the waterfalls, so do exercise caution!