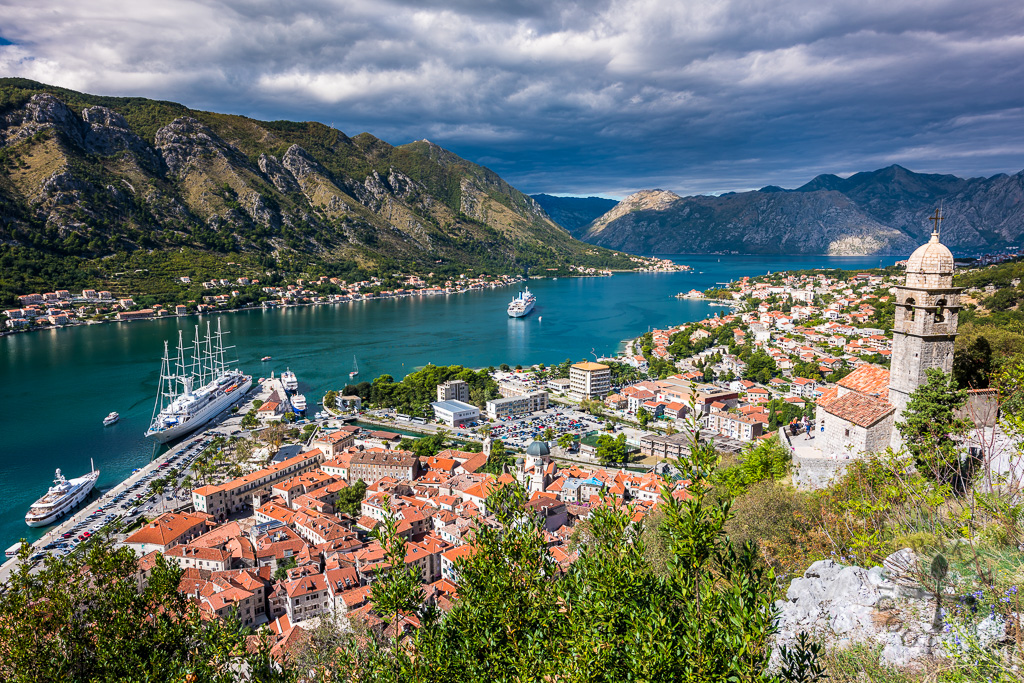 Panoramic view of Kotor from the Fortifications of Kotor

On our second day in Dubrovnik, we took a day trip out to Kotor, a coastal town in Montenegro. Kotor is well-known for its Old Town, a well-preserved urbanisation with many medieval and historical monuments built between the 12th and 14th centuries, and also the magnificent fortifications which surround Kotor.

Getting to Kotor from Dubrovnik

We originally wanted to purchase return bus tickets which would have cost €29 per return ticket. The first bus leaves Dubrovnik at 7 in the morning while the last bus leaves Kotor at 6.50 p.m. in the evening. This website can be used to check for timings and rates. However, we found out later that it’s much cheaper to rent a car at €62 and split among the 4 of us (we also spent some euros to top up the fuel before returning the car). Renting a car is also more convenient for us as we did not have to be restricted by the bus timings. If you are also planning to rent a car, do make sure the rental company includes the “Green Card“, which is a form of insurance as it will be checked at the borders.

The drive to Kotor is supposed to take around 2 hours (for bus it’s also about the same duration), but as the traffic was quite heavy that day, it took us about 3 hours to reach Kotor. Remember to bring your passport because you are going to cross a border! 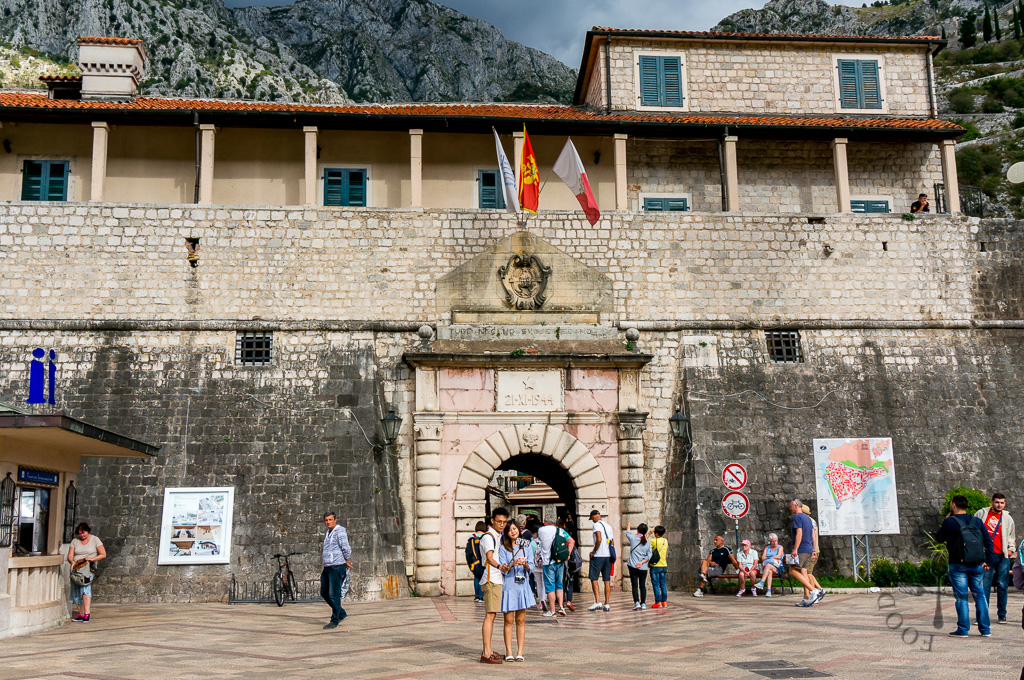 Tuđe Nećemo, Svoje Ne Damo
What belongs to others we don’t want, what is ours we will never surrender.
– Josip Broz Tito (quote is found on top of the Sea Gate)

After parking our car (parking rates range from €0.70 to €1.50 per hour, apparently there are some free parking lots but we didn’t seek them out), we walked through one of the three entrances, Sea Gate, to enter Kotor’s Old Town. Constructed in 1555, the Sea Gate was constructed while under Venetian rule (1420 to 1797). It was around 11 a.m. when we reached the Old Town, so we decided to refuel ourselves first before climbing the Fortifications of Kotor. 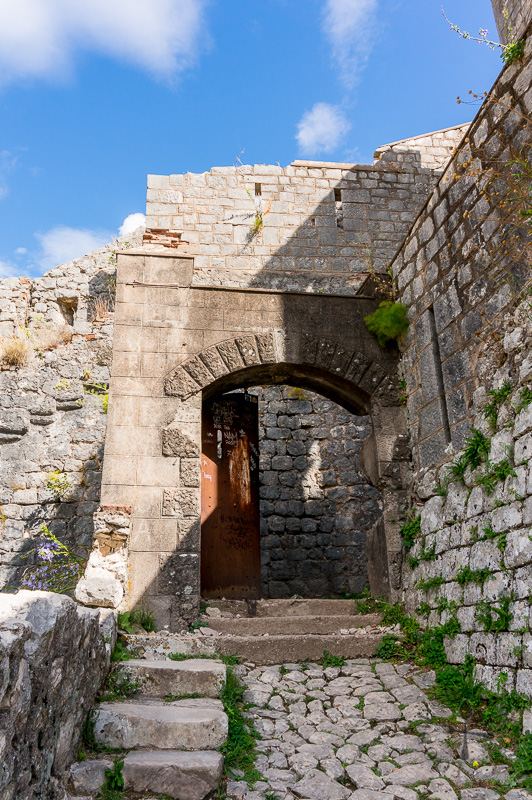 On the way up the Fortifications of Kotor

There are 2 ways up the fortifications of Kotor, one is near Apartments Popovic (42.423787, 18.771598), and the other is near La Dolce Vita Apartments (42.425857, 18.772056) – or just follow Google Maps. We went up via Apartments Popovic and before we started climbing the steps, we passed by a guy who asked for €3 per person for the entrance fee. I’m not sure if it’s an official ticket office as the ticket booth is just a table and we didn’t get any tickets at all, but we just paid the money anyway. We found out online that it’s only payable from May to October, perhaps because that’s when there are more travellers visiting Kotor. 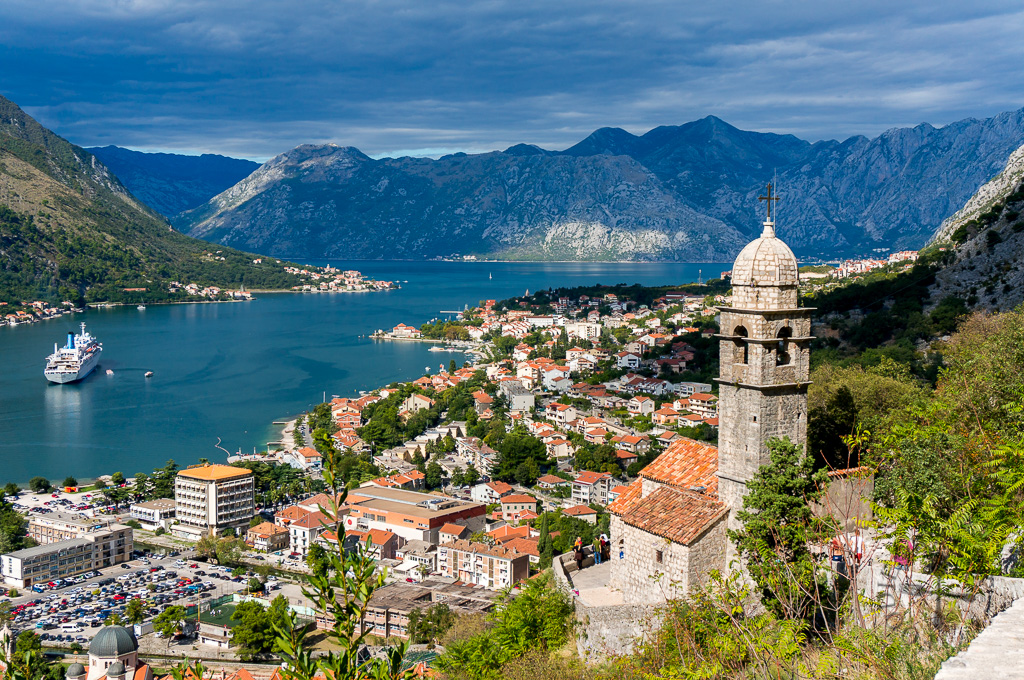 Halfway up the fortifications at Church of Our Lady of Remedy

The hike is about 4.5 kilometres long and will take 2.5 to 3 hours for a return hike. Most of the path is divided to 2 sides, one side consists of stone stairs (roughly about 1,400 steps to the top) while the other side is a cobbled path, most likely for the people to haul supplies up (by cart or animals maybe?) in the past. Some of the stones were quite slippery even though it didn’t rain, but luckily we didn’t slip during our hike.

Building of the Fortifications of Kotor started since the 6th century, which was commissioned by the Byzantine (East Roman) emperor, Justinian I, and constantly reinforced until the 19th century. The fortification walls created a continuous ring around the Old Town in the 13th and 14th centuries, constructed by the Venetians. The entire fortification is an impressive piece of work, and will just leave you wondering, “How did they do it?” 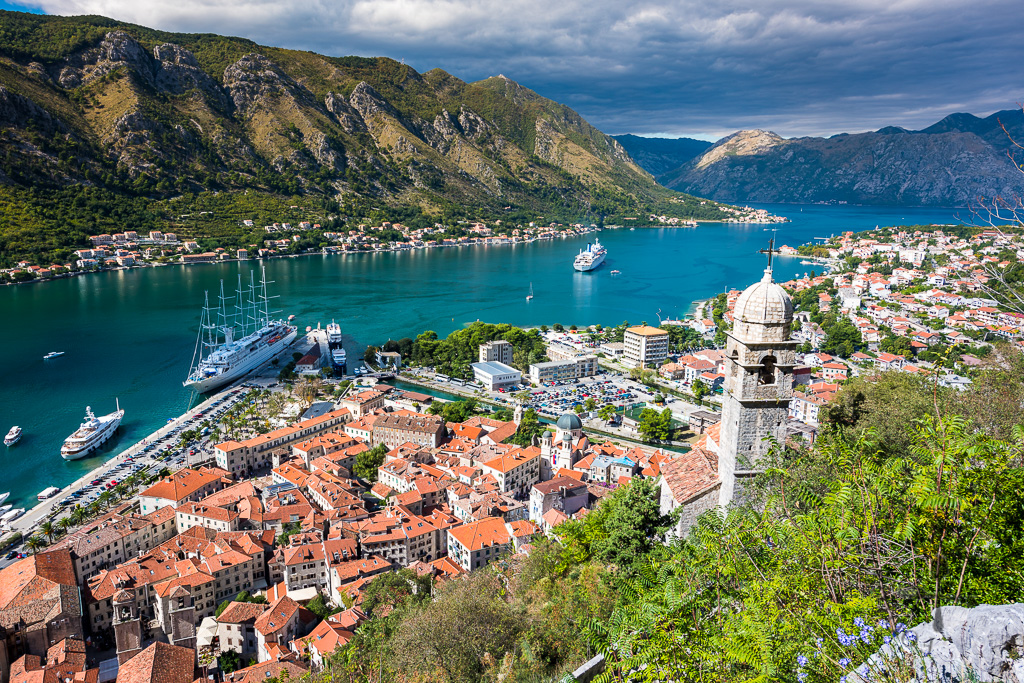 It’s normal for fortifications to consist of walls, ramparts, bastions, and towers, but at Fortifications of Kotor, there’s even a church – The Church of Our Lady of Remedy – which dates from 1518. No modern technology has been built to make access to the church easier, yet it does not deter locals and travellers from climbing up to this Roman Catholic church by foot. 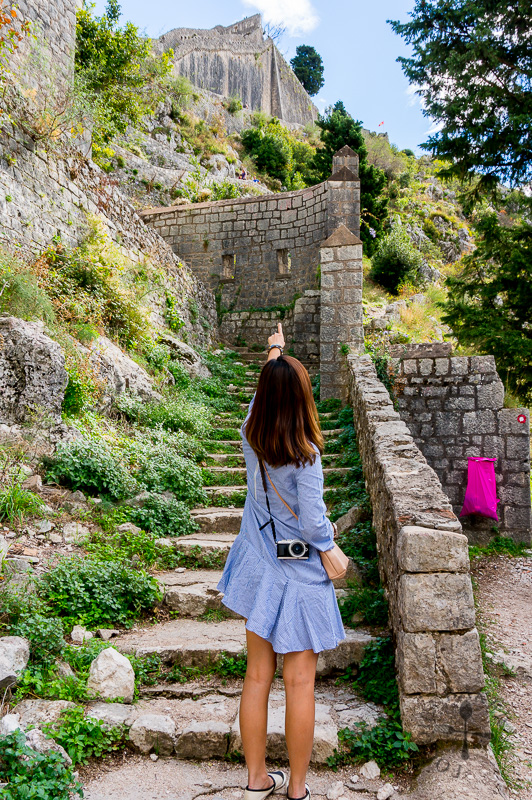 Heading up to St. John’s Fortress! (Don’t head up these steps as it leads to a dead-end.)

But we are not stopping at the church! We are continuing all the way up to the highest point of the fortifications – St. John’s Fortress. There will be a few times during the hike where you will encounter different paths, but the path up is well-marked with a white circle with red outline (you can see the marking next to the bright pink garbage bin in the above photo), so just follow the marks to continue upwards to reach St. John’s Fortress. 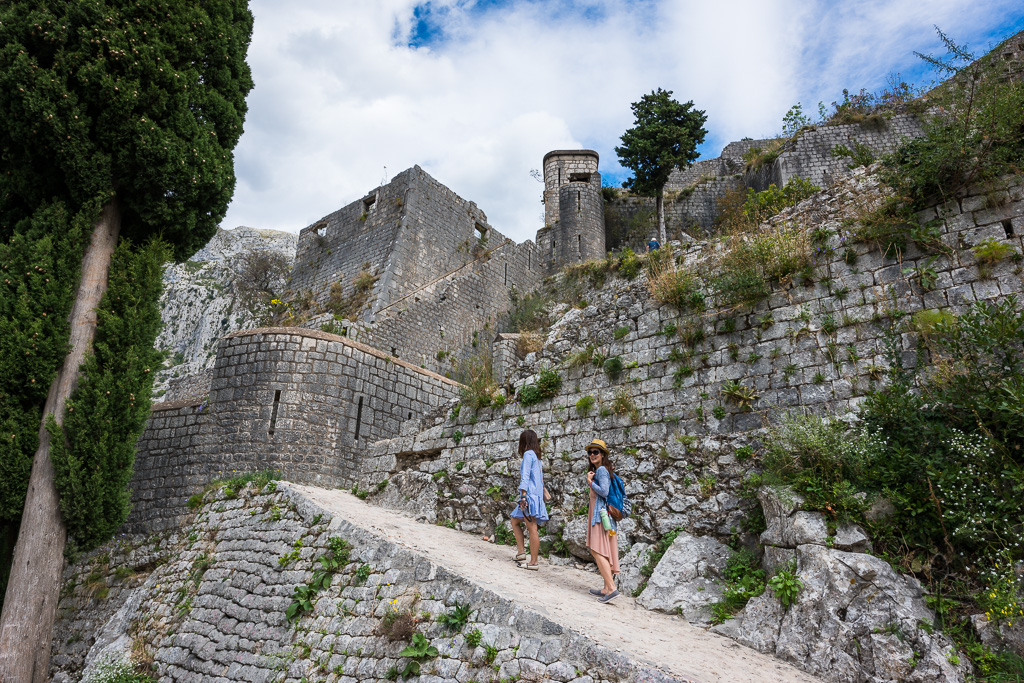 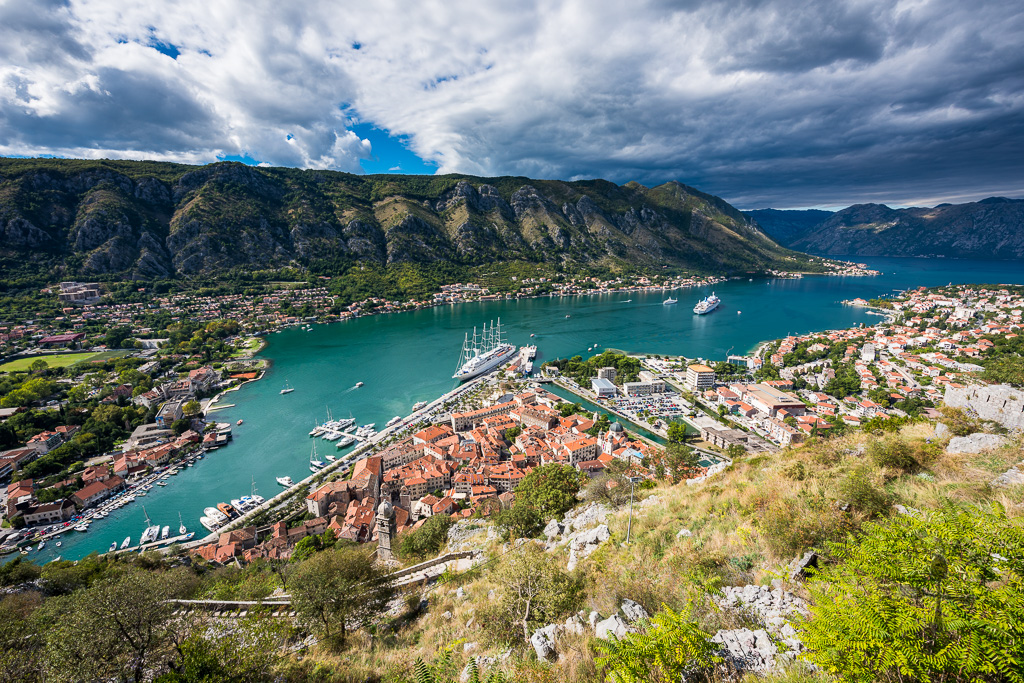 As we climbed, we get better and better views of Kotor Old Town, which was built on a triangular piece of land, and a glimpse of Bay of Kotor.

When driving to Kotor from Dubrovnik, we were cruising by the Bay of Kotor, also a part of UNESCO World Heritage Site since 1979. The Bay of Kotor, also known as Boka, is a winding bay with an area of about 88 square kilometres, with a shoreline extending 107.3 kilometres. It is made up of four smaller gulfs, and the one we are seeing from the fortifications is gulf of Kotor. The beautiful and clear waters, medieval Kotor Old Town and the stunning mountain backdrop is a view that took all our breaths away. 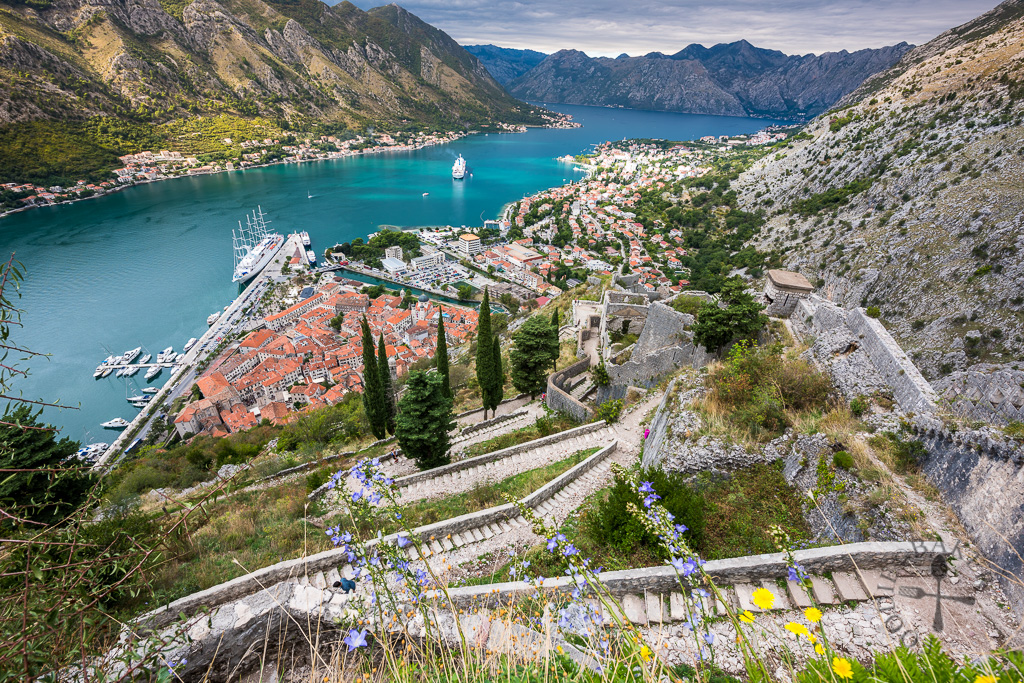 The winding steps up the fortifications 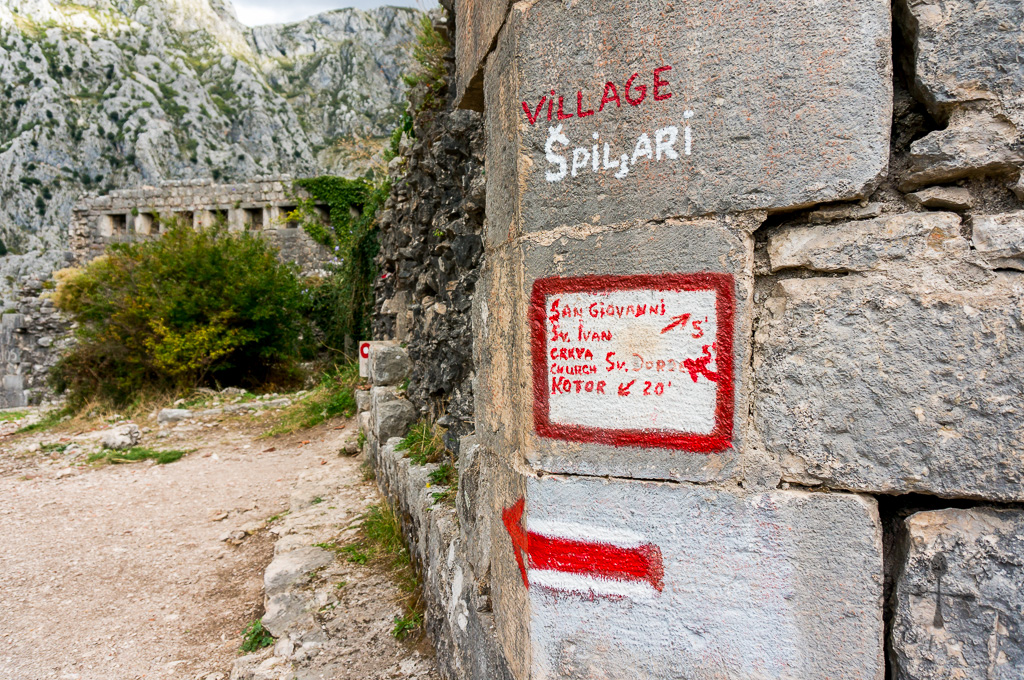 As we approached St. John’s Fortress, we saw a sign that points towards Village Špiljari, a small village with only one family still living there today. It’s possible to take a break at the village but due to time constraints, we didn’t hike there. From Špiljari, the hiking path continues onto the Ladder of Kotor hike (also known as Ladder of Cattaro), which will be a steep zigzag up the mountain. I found a blog detailing about the strenuous hike, check it out here! 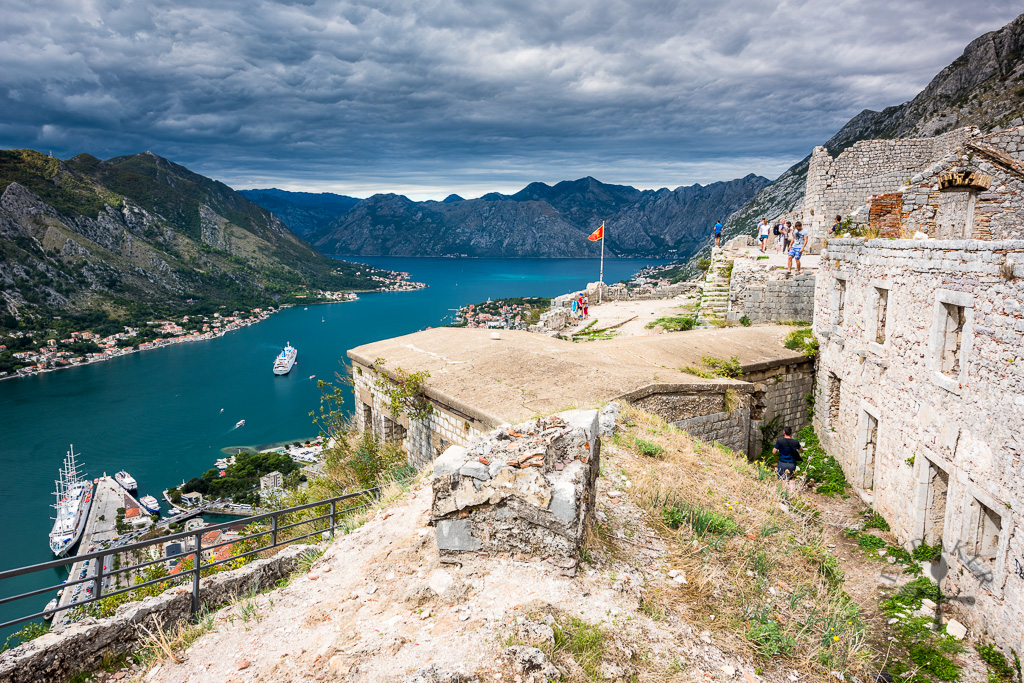 Known as the fortress of Sveti Ivan (which means St. John), the fortress is also sometimes known as St. John’s Castle. The original fortress built on this spot was in Illyrian times (super long time ago), but the one we stood on now was a medieval replacement. The fortress is not massive, but still incredibly impressive, if you just consider the amount of effort needed to build this fortress so high up! 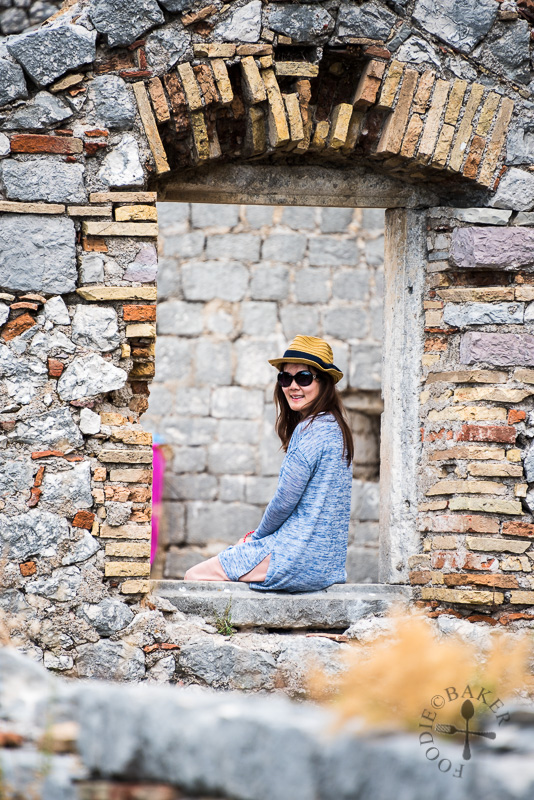 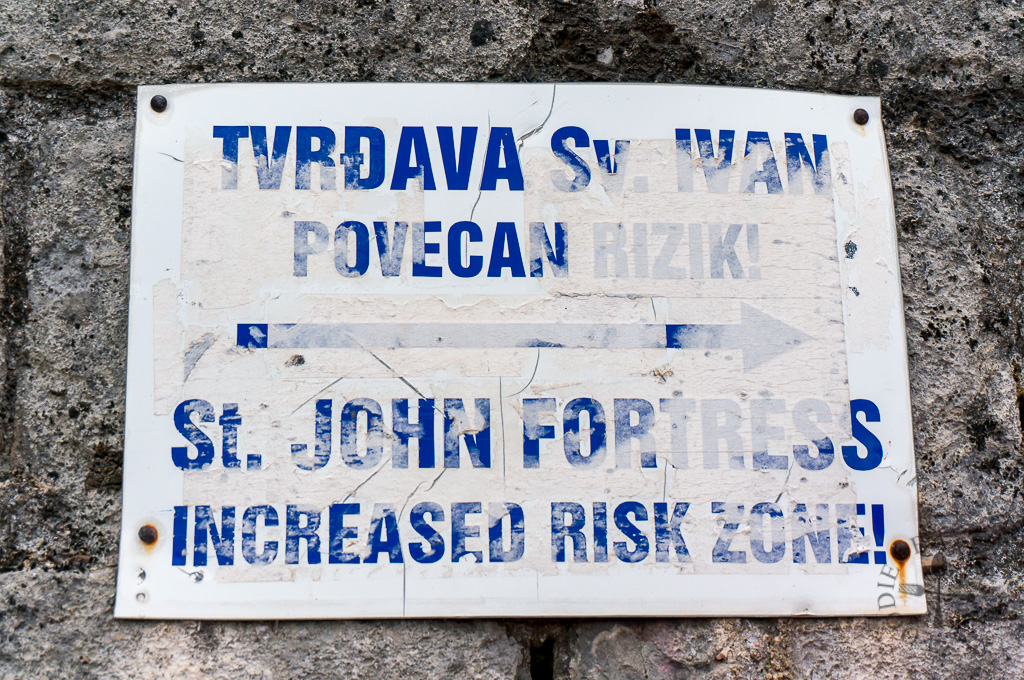 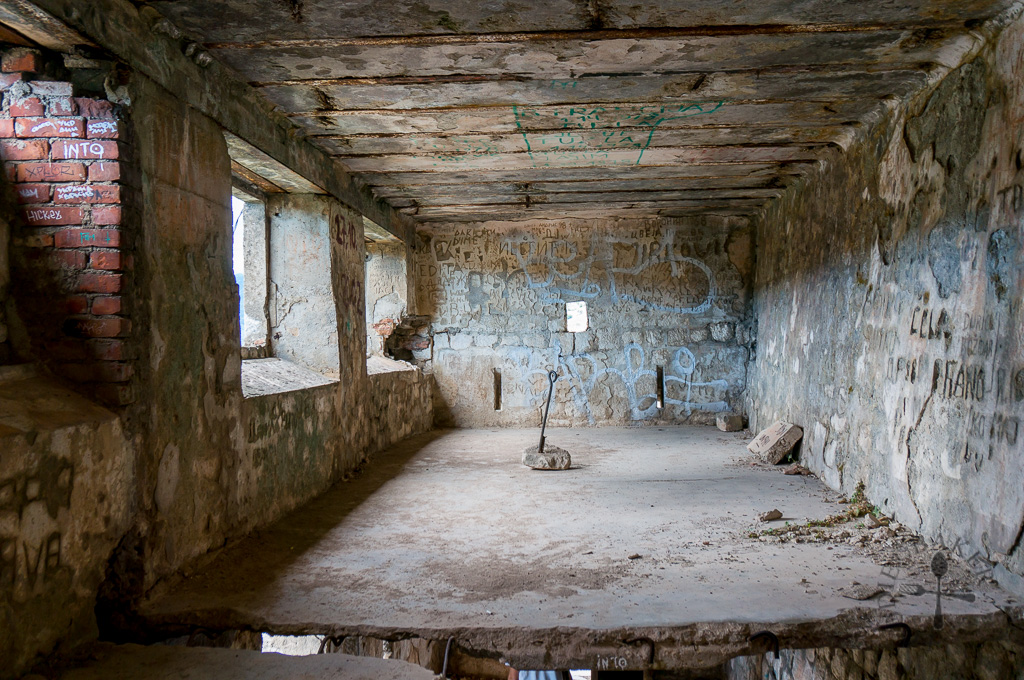 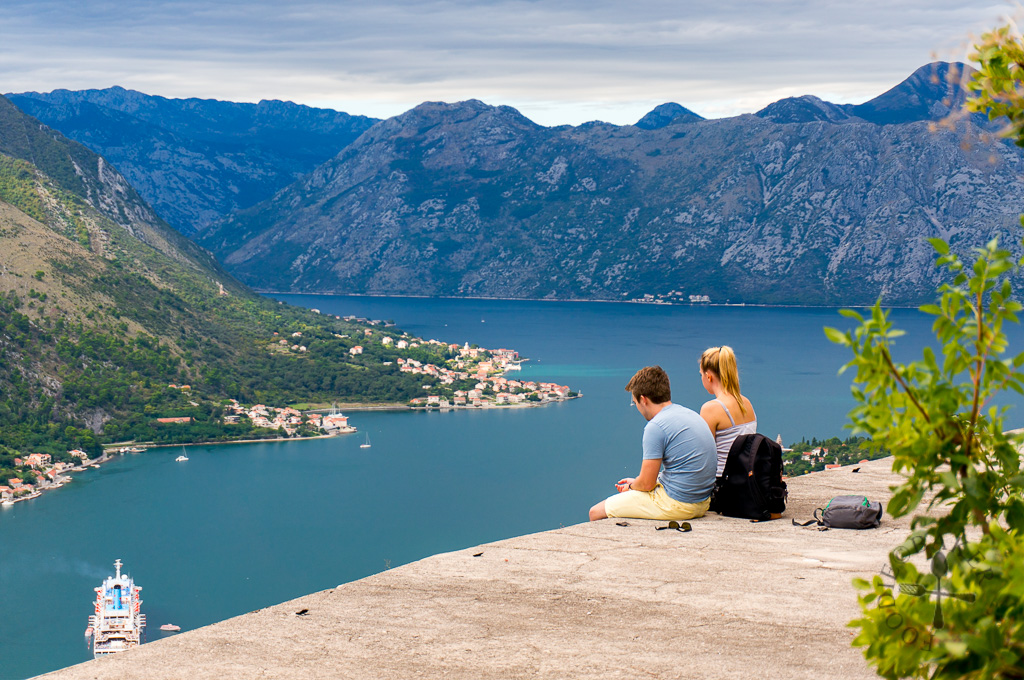 Take a break before heading down!

After some photos and a break, we made our way back down to the Old Town. The journey down can be faster, but do still take it slow as it may put a strain on the knees. Here’s a summary of the hike up the fortifications: 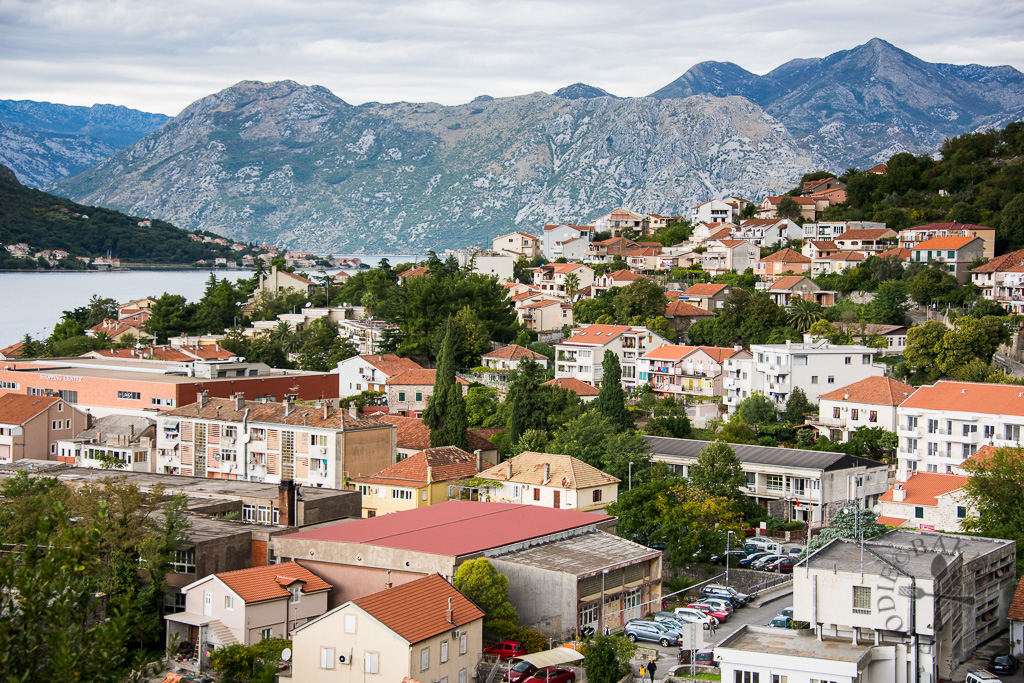 On our way down!

We spent some time wandering around after we reached back down to Kotor Old Town. The Old Town is a pretty small place, so we managed to pass by all the sights relatively quickly. There are quite a few churches being erected in the Old Town throughout the centuries, though we only managed to take photos of 2 of them (3 if you count Church of Our Lady of Remedy). 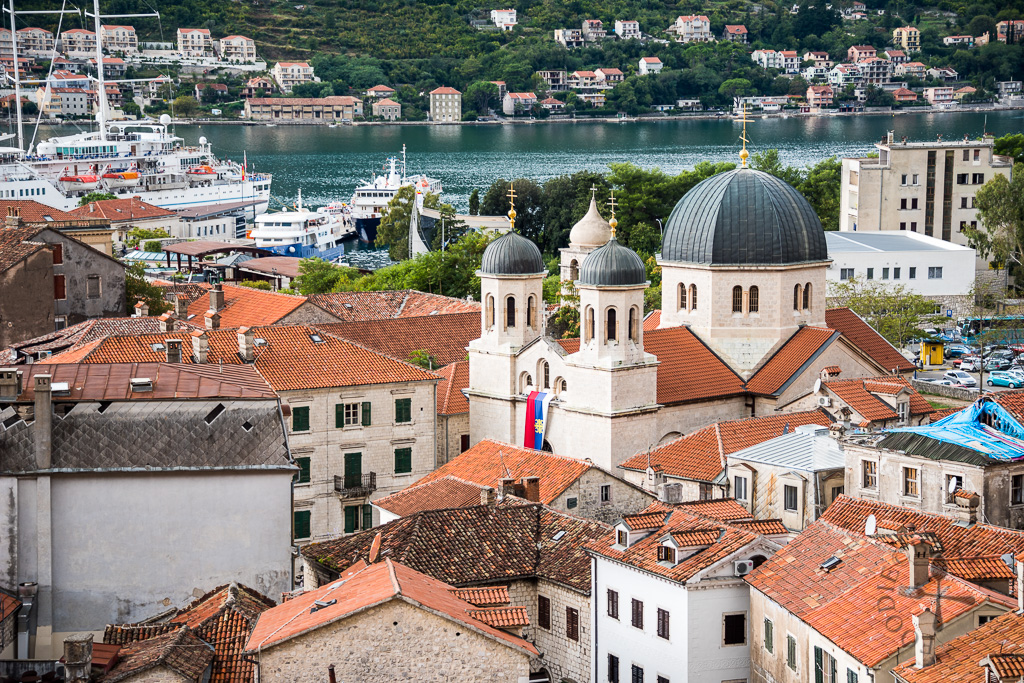 Saw the St. Nicholas Church on our way down

St. Nicholas Church is a Serbian Orthodox Church that is built recently in 1909 located on St. Luke’s Square. 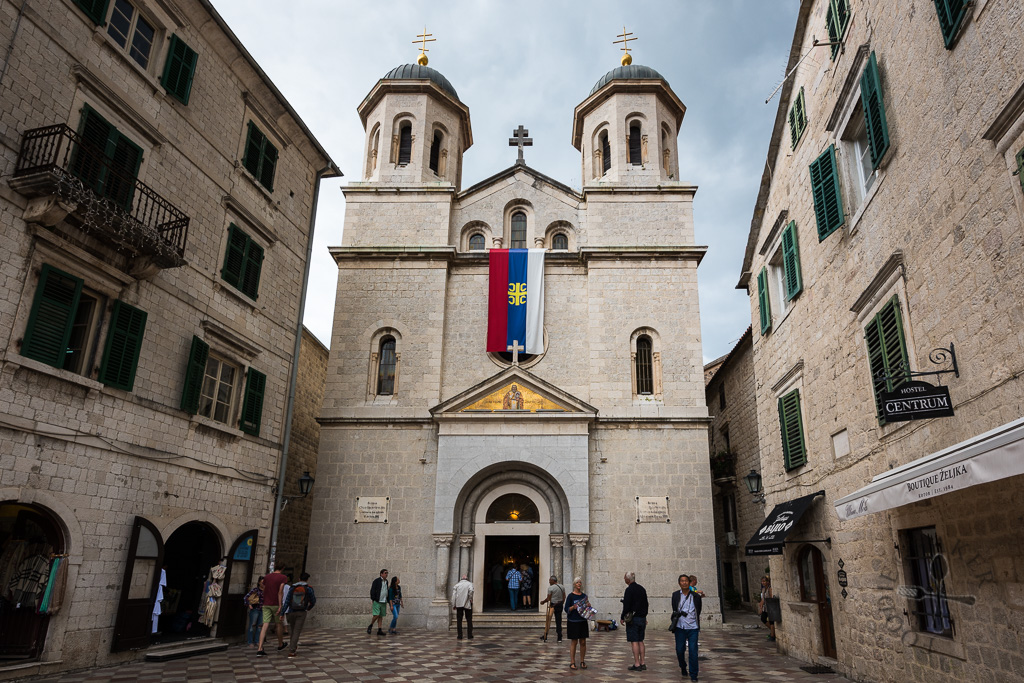 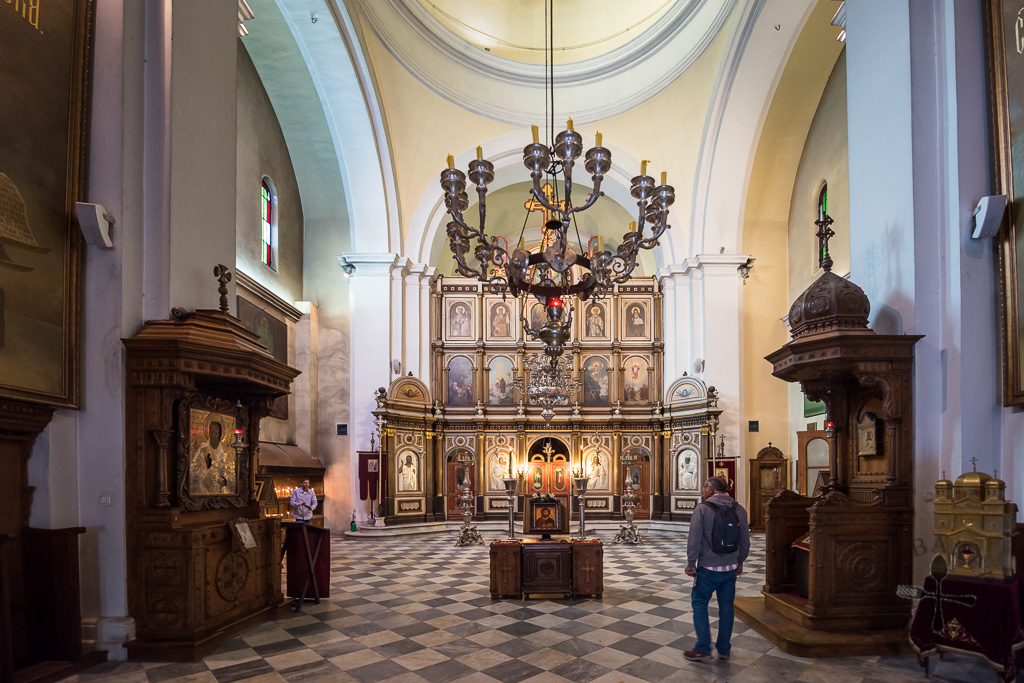 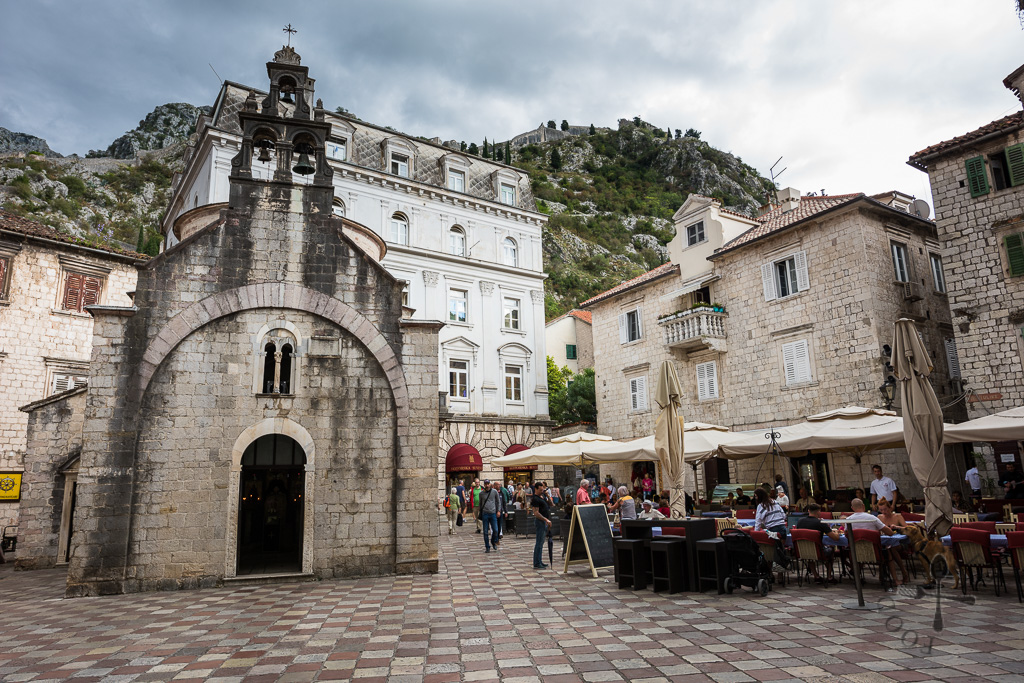 In the same St. Luke’s Square stands the St. Luke’s Church, one of the oldest churches in Kotor. The church was built in 1195 as a Catholic church until the mid-17th century, when it was converted into an Orthodox church. 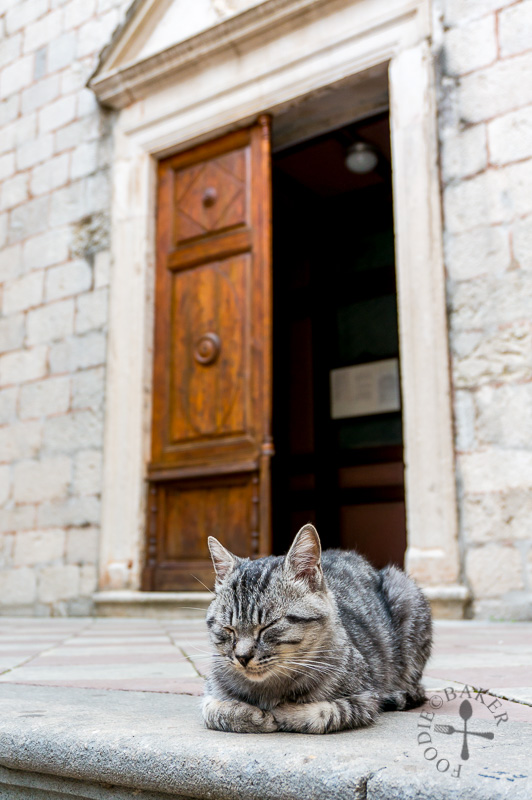 The kitty got quite a lot of attention from travellers too 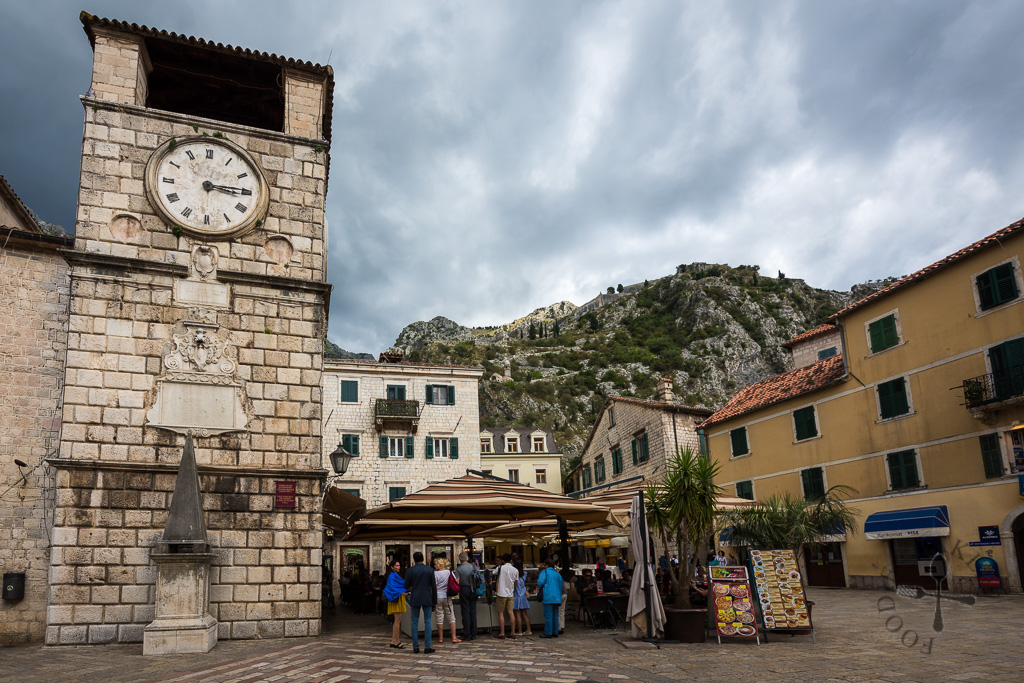 Kotor’s clock tower was erected in 1602 and in front of the clock tower stood a stone pyramid, which was used as a pillory to shame wayward residents of Kotor in the past. 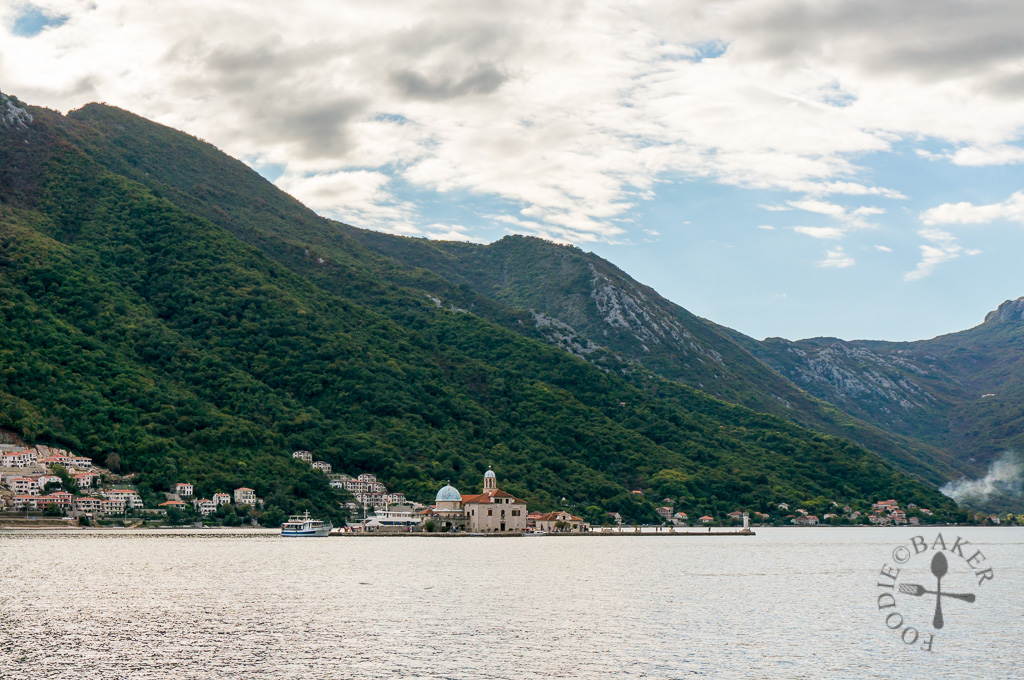 Our Lady of the Rocks on the artificial island

If you are driving to Kotor via Dubrovnik, you will most likely see a small island not far away from the coast of the town Perast. The island is an artificial island with a church built on it. According to legend, in 1452, when a fisherman was healed after finding a small crag in the sea with the painting of Virgin Mary and Child on it, he decided to pay tribute and built a church on the spot where the crag was found. Huge rocks were gathered and sunk to the bottom of the sea until an island was formed, and then the church, Our Lady of the Rocks, was built on the artificial island. 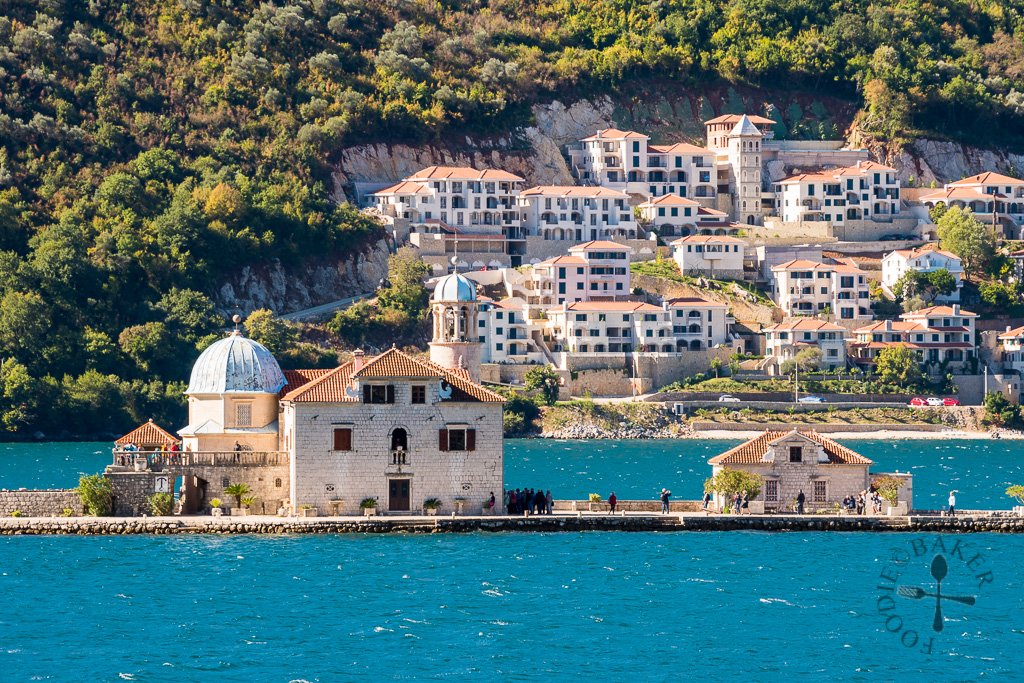 To visit the church, take a boat ride from the coastal towns (Perast or Kotor) which will cost about a few euros per person (not sure about the price as we didn’t visit the church). 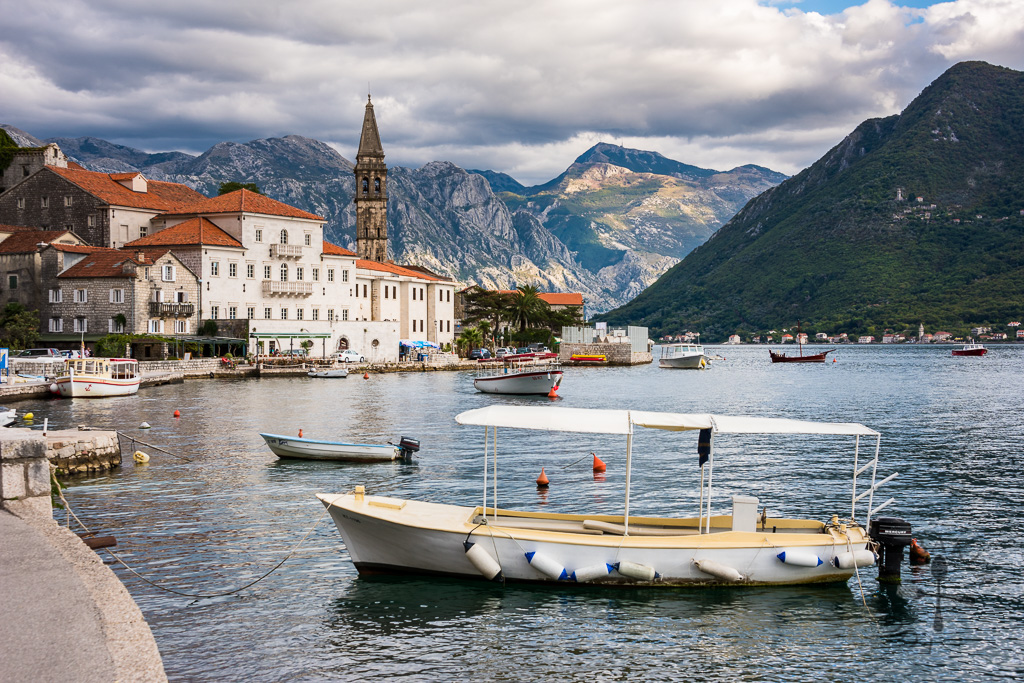 We stopped by Perast, a small town near Kotor, for a short exploration before dinner. We parked our car in Perast (I think parking is free in this town) and just walk around for a short while. There’s nothing much to do in this town, but because the town is surrounded by mountains all around, the views were really pretty, perfect for photo-taking! 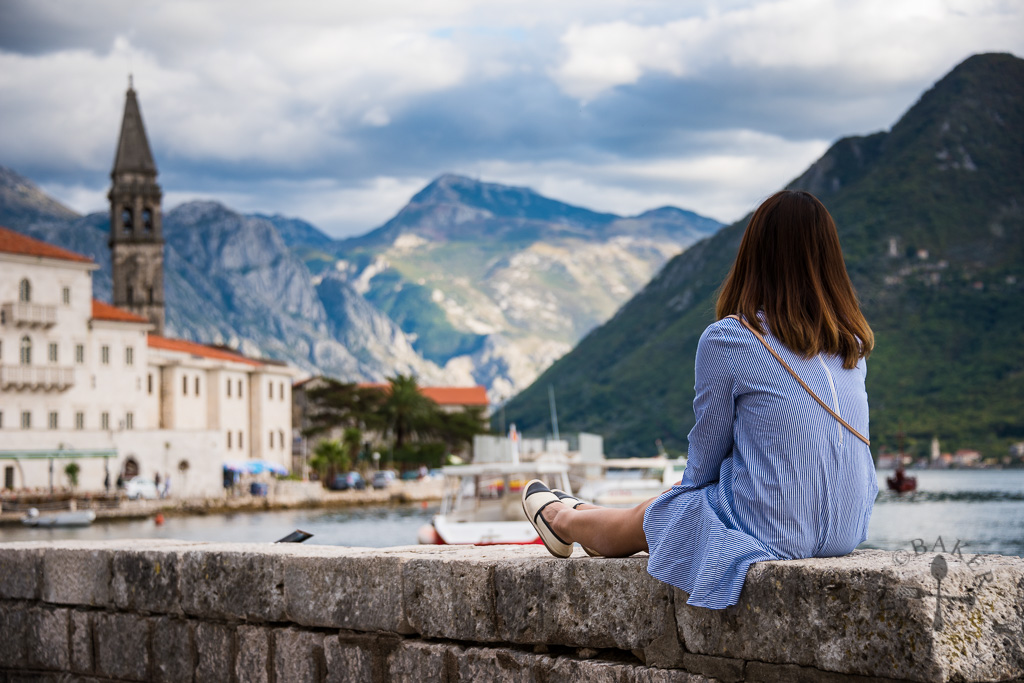 One last photo before dinner! 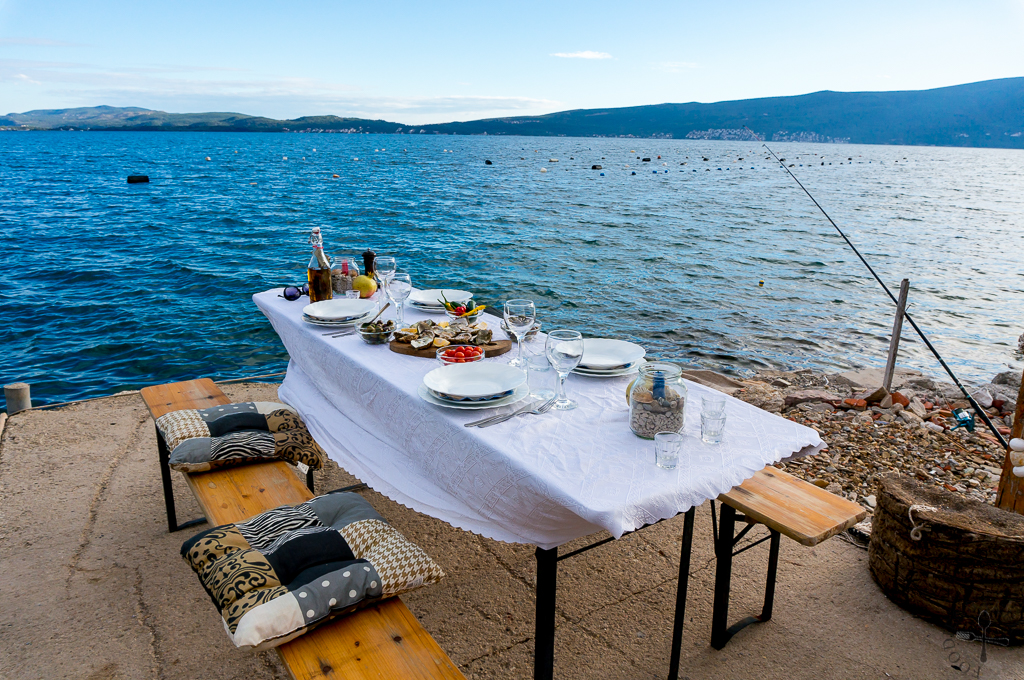 I will be saving our dinner in Montenegro for the next post – because it totally deserves a post on its own! While waiting for dinner to be served, you might want to check out the previous travelogue or our Balkans itinerary: