This set of photos have been sitting in my computer for almost a year but due to many  reasons, they have not seen the light of day (except on X's Facebook) until today.

I don't consider myself a very adventurous person. When X and his colleagues planned to climb Mount Kota Kinabalu a few years back, a prominent mountain on the island of Borneo in Southeast Asia, they trained almost every week, either climbing stairs up 40-storey HDBs (which are housing estates in case you are not familiar with the term) or climbing up Bukit Timah Hill. This is so that they can reach the peak before a specific time so that they can do the ferrata. I did not go because hiking is not my favourite kind of itinerary (as you can most probably tell, my kind of itinerary will feature a lot of food haha).

So when X asked me if I wanted to go for a 5-day trip to East Java which includes a bit of hiking, I was very inclined to decline. He persuaded me for a few times before I relented, and off we went with 2 of his colleagues during a long holiday weekend. Out of the 4 mornings we were there, we woke up in the middle of the night thrice, with the last morning waking up at an ungodly 1 a.m. But the mornings were worth it as I got to see 4 beautiful and breathtaking sunrises, each unique and so beautiful that no words can describe the beauty completely.

And it turned out to be a pretty relaxing trip as well, as most afternoons were spent on the road, travelling to the next destination. We booked the tour via a local travel agency (before we left Singapore) which included pick-ups to and from the airport, transport to all the destinations, lodging, entrance fees and guides. The only thing we have to pay is food, which really don't cost much as we eat street food everyday (and it was really delicious too, much to the delight of my tummy!)

Borobudur was our Day 2 itinerary (I skipped Day 1 but I may go back to it in later posts), instead of entering Borobudur to see the sunrise, we head to Punthuk Setumbu, a hill located about 5 kilometres away from Borobudur temple (we stayed at Manohara Hotel, which is right next to Borobudur, so it's really near for us), where we can see the sun climbing up behind Mount Merapi and the morning mist clearing to reveal Borobudur.

We reached the place around 5 a.m. in the morning and took a short 15-minute hill climb up to the top. The place was not very crowded with tourists so it's very peaceful and serene to watch the sunrise. 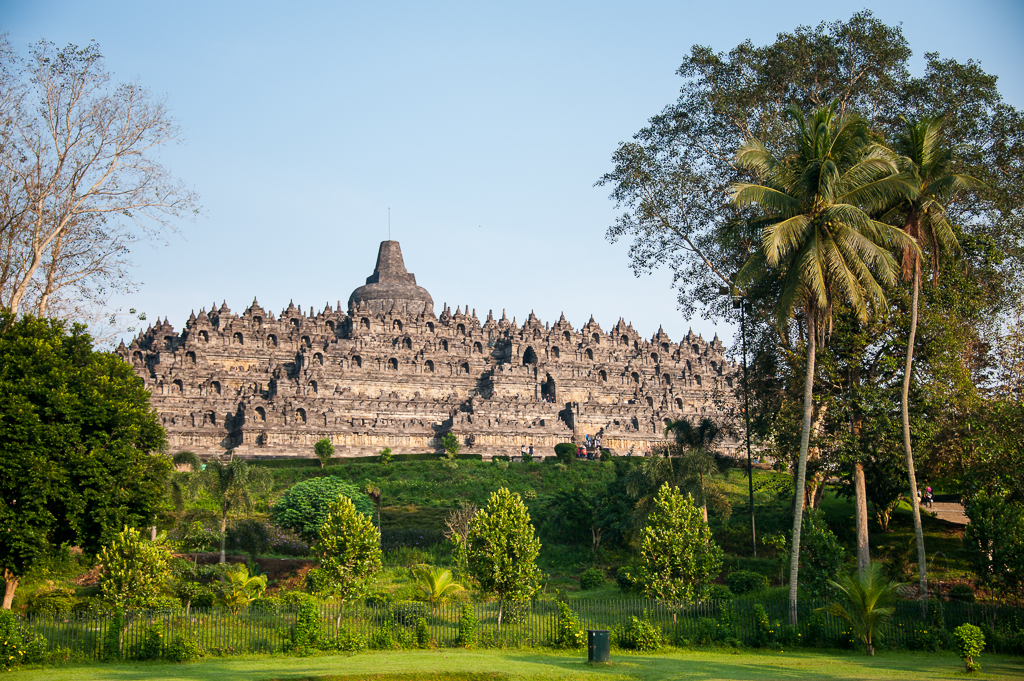 After the sunrise, our driver took us back to Borobudur where we had a guided tour of the place for about 2 hours, which we learned about the history and the architecture of the ancient temple.

Borobudur is the world's largest Buddhist monument and is the home to hundreds of Buddha statues and nearly 3,000 bas-relief sculptures, illustrating the life and teachings of the Buddha. It was constructed in the 8th and 9th centuries but was mysteriously abandoned in 1500s. The volcanic eruptions in the next few centuries buried the monument but was again excavated in the early 19th century. Our guide told us that as the monument was buried, the bas-reliefs were well-preserved, hence enabling us to see the intricacy of the stories carved onto the rocks today. 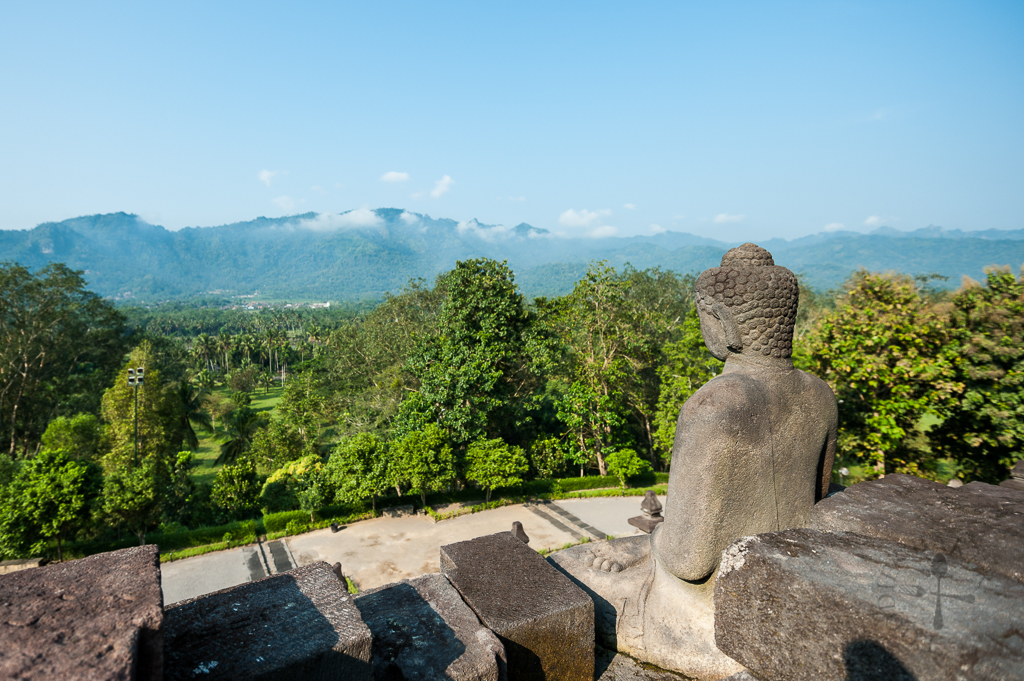 The acidic volcanic ash is currently a problem for this majestic monument, as Borobudur lies between two twin volcanoes, Sundoro-Sumbing and Merbabu-Merapi, of which 3 of them are still active volcanoes. Hence plastic sheets are used to cover the monument whenever there is an eruption warning. 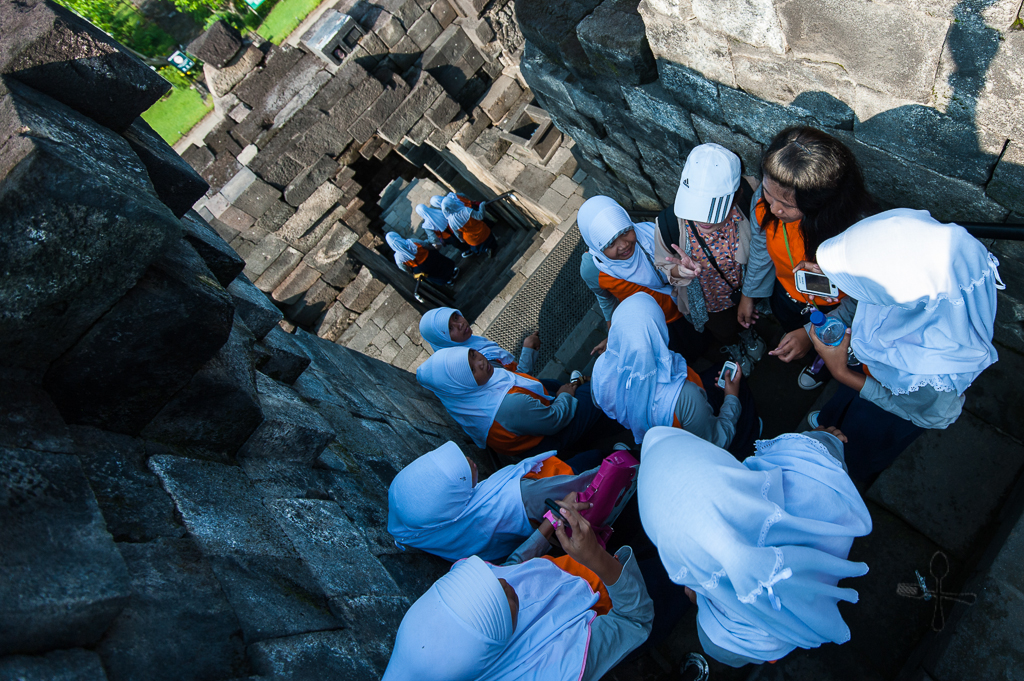 An amusing experience I had was that I was approached by the local students several times for an "interview". Our guide told us that schools will bring the students here, in which the students are tasked to interview tourists to improve their command of English. X just couldn't believe how "popular" I was - I guess he's just jealous that I'm more approachable than him hehe. 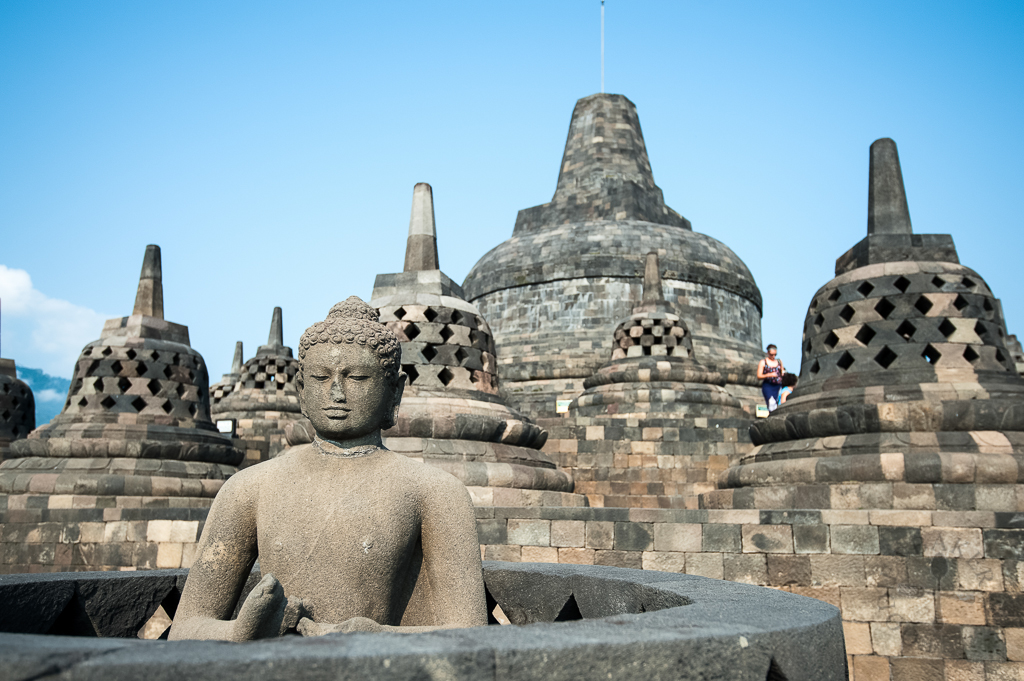 At the top of the monument are 3 circular platforms with 72 openwork stupas, each containing a statue of the Buddha. At the very top is a monumental stupa. 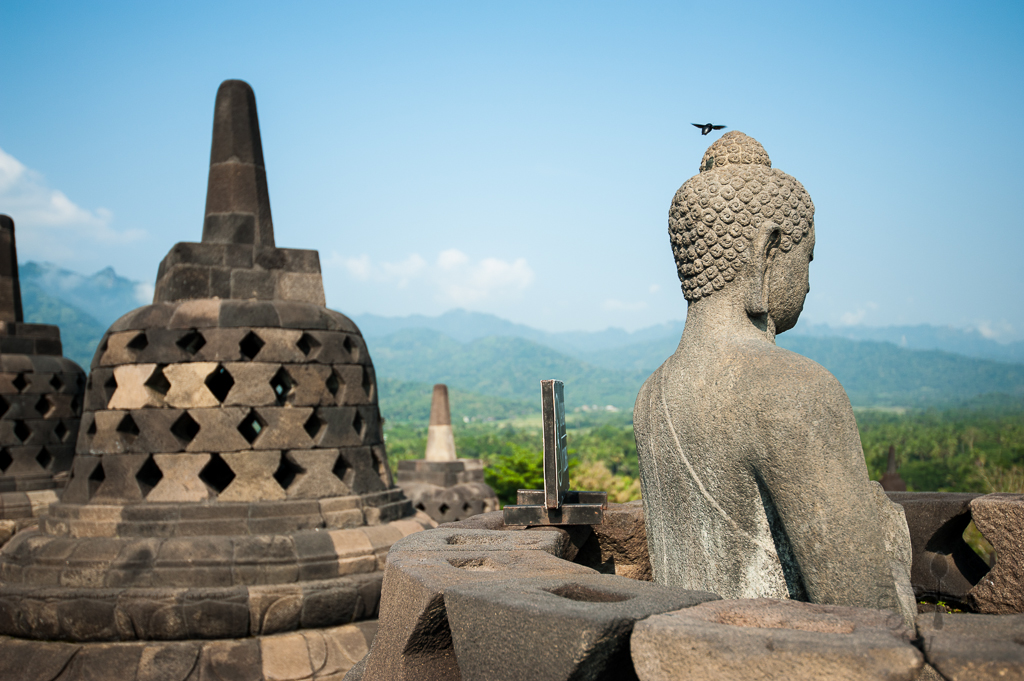 And then we saw this bug - which will fly and hover everywhere but will always return to the same Buddha's head. It's a little creepy and intriguing all at the same time.

And that's all for Borobudur (or in fact, Day 2 of our trip)! After the tour, we headed back to our hotel for breakfast before packing and leaving for the next destination. Till the next travelogue! And if you are interested, the whole itinerary of our trip, including the price of our tour can be found here!