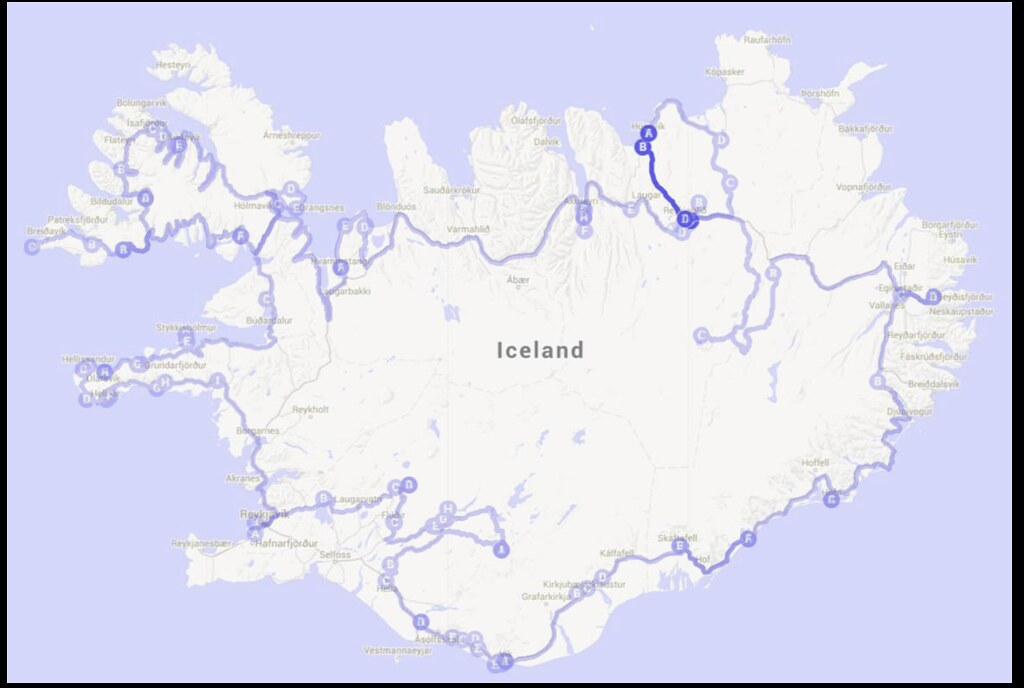 I’m finally more than halfway through blogging about our Iceland travelogue! On Day 12, we woke up at around 7 and after showering and washing up, we head out for breakfast. Yay to coffee and freshly baked bread! 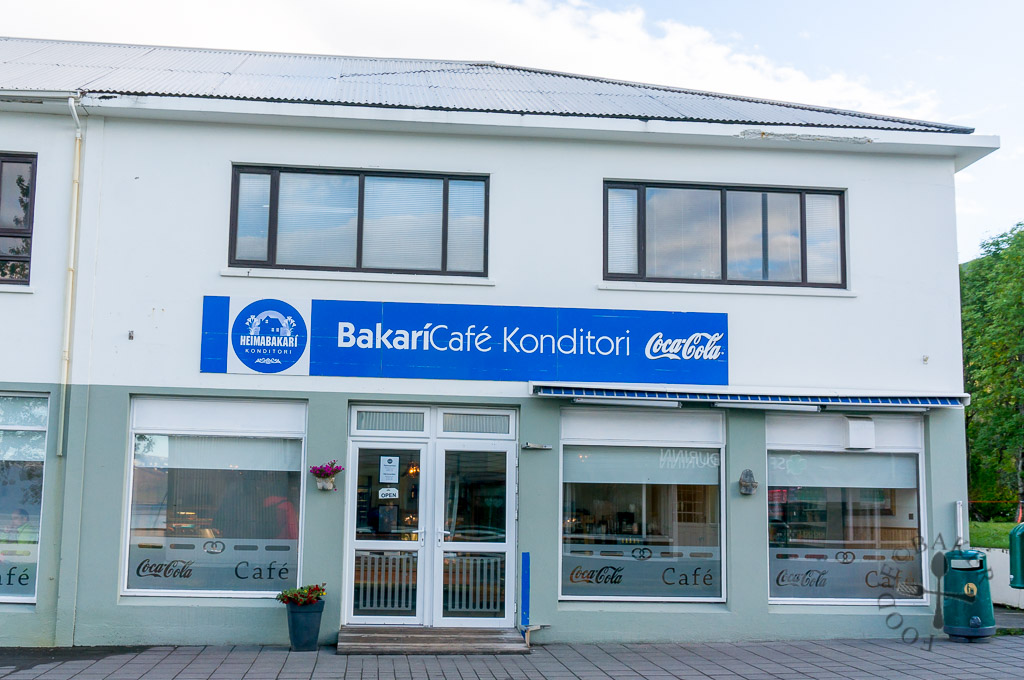 Having breakfast out was definitely a nice break from our usual routine. Heimabakari offers a wide selection of freshly baked goods and coffee, so it took me quite some time to decide on the pastries. 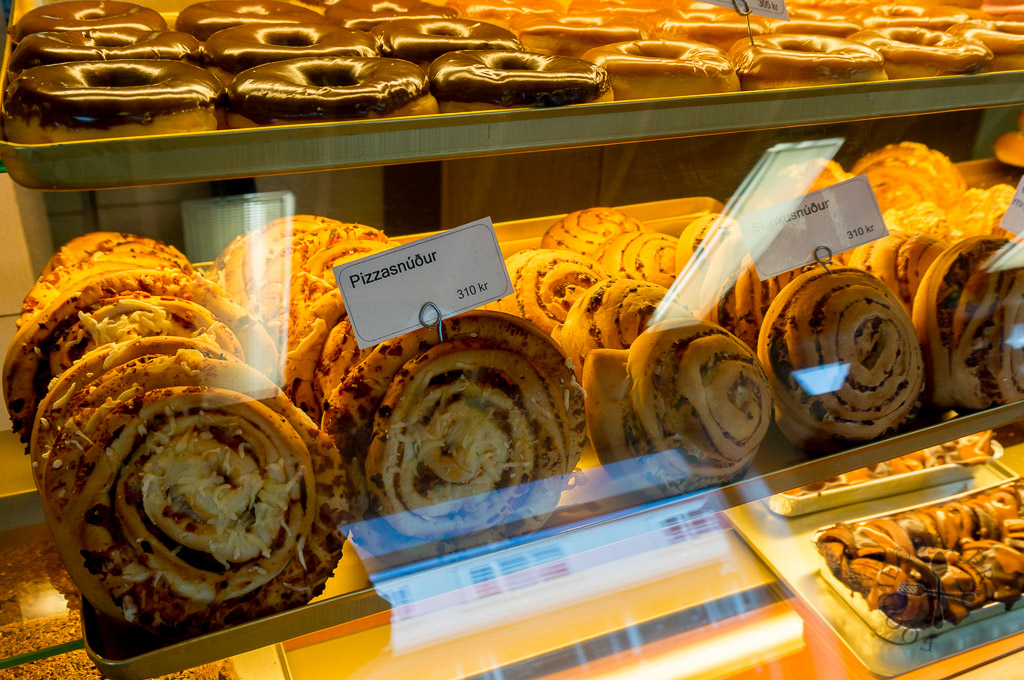 The bakery is also located very near the harbour for whale watching, so we dined inside the bakery while waiting for time to pass. 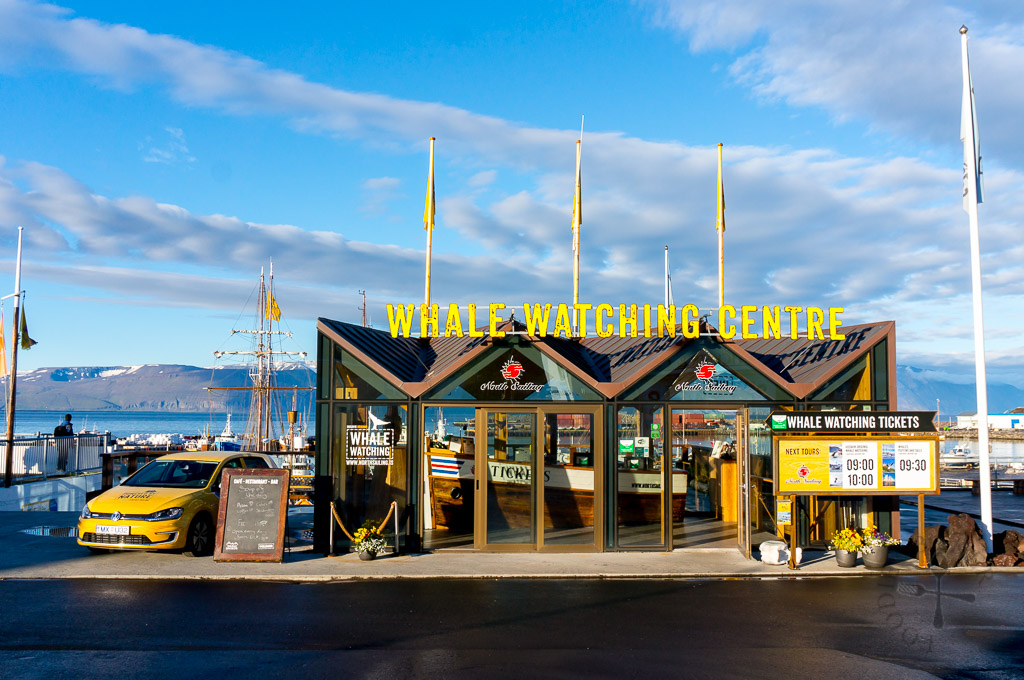 There are quite a handful of whale-watching tour operators throughout Iceland – Reykjavík, Vestmannaeyjar islands of the south coast, Húsavík, Akureyri and Dalvik in the north and Ólafsvík on Snæfellsnes peninsula. In Húsavík, there are 4 tour operators, Gentle Giants, Húsavík Adventures, North Sailing and Salka. Mývatn Campsite offered tickets for two of the tour operators and we ended up booking the 10a.m. tour with North Sailing. It’s advisable to book the tours a few days in advance (especially during the peak season July and August) to avoid disappointment. 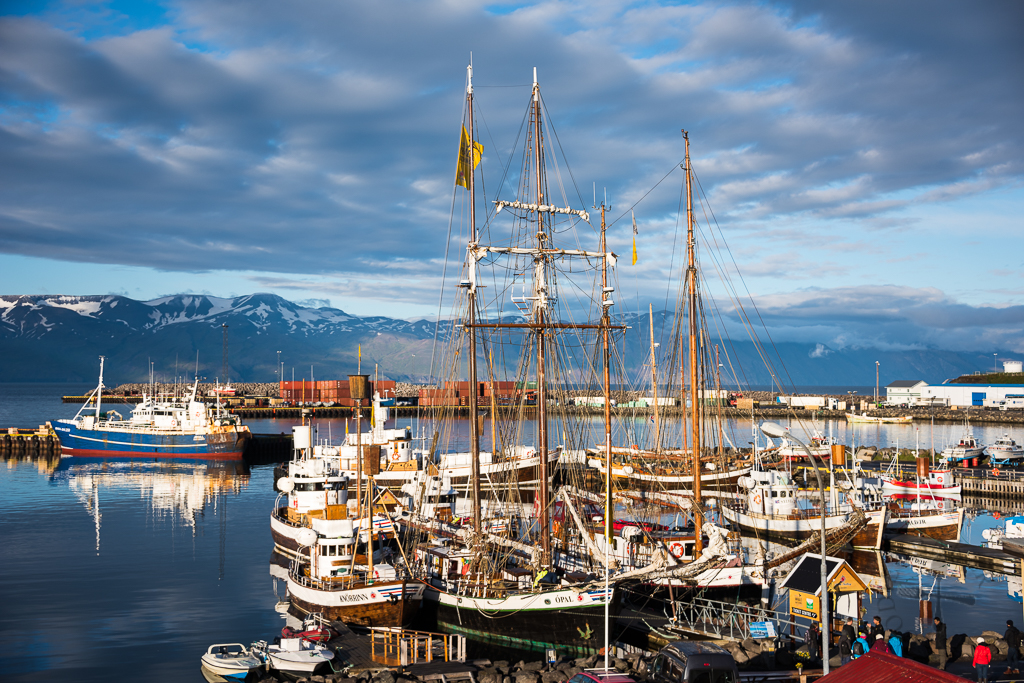 North Sailing owns a fleet of 7 oak boats, 6 of which are traditional Icelandic oak fishing boats (now converted to ferry passengers). Somehow I love old boats as they look so classic and beautiful! Apparently one of their boats is to be installed with a unique Regenerative Plug-in Hybrid Propulsion system which will allow the boat to run solely on renewable energy, charging with wind power when using the sails. The efforts that North Sailing puts in to be more environmentally friendly is one main reason why I strongly recommend this company. 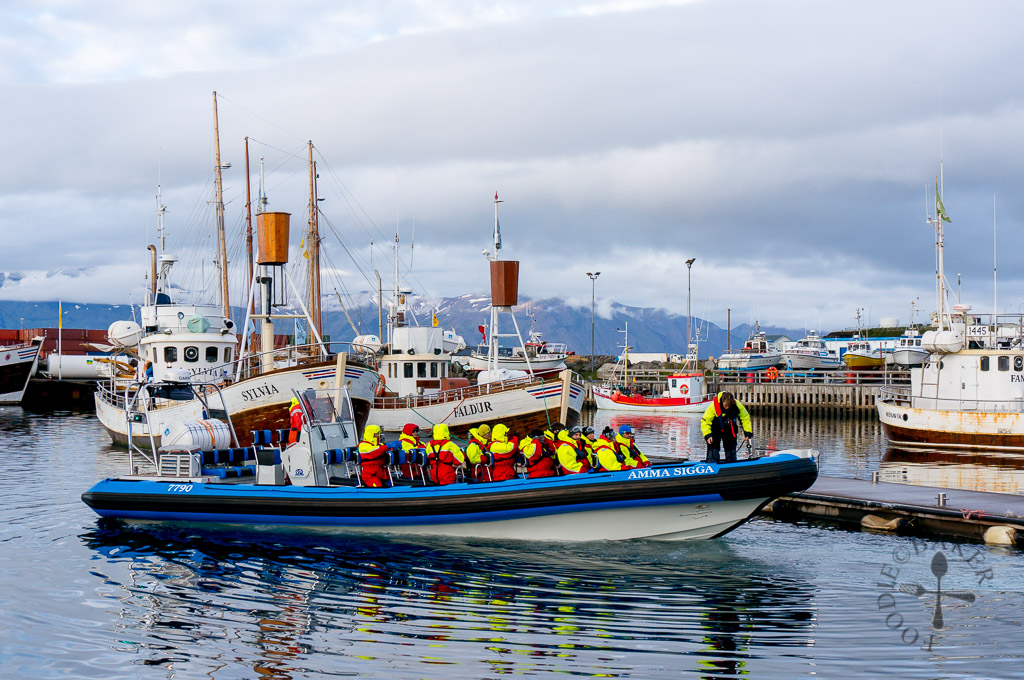 Some companies offer tours on Rigid Inflatable Boats (RIB) which allow passengers to get closer to the whales, but of course you’ll have to pay more. 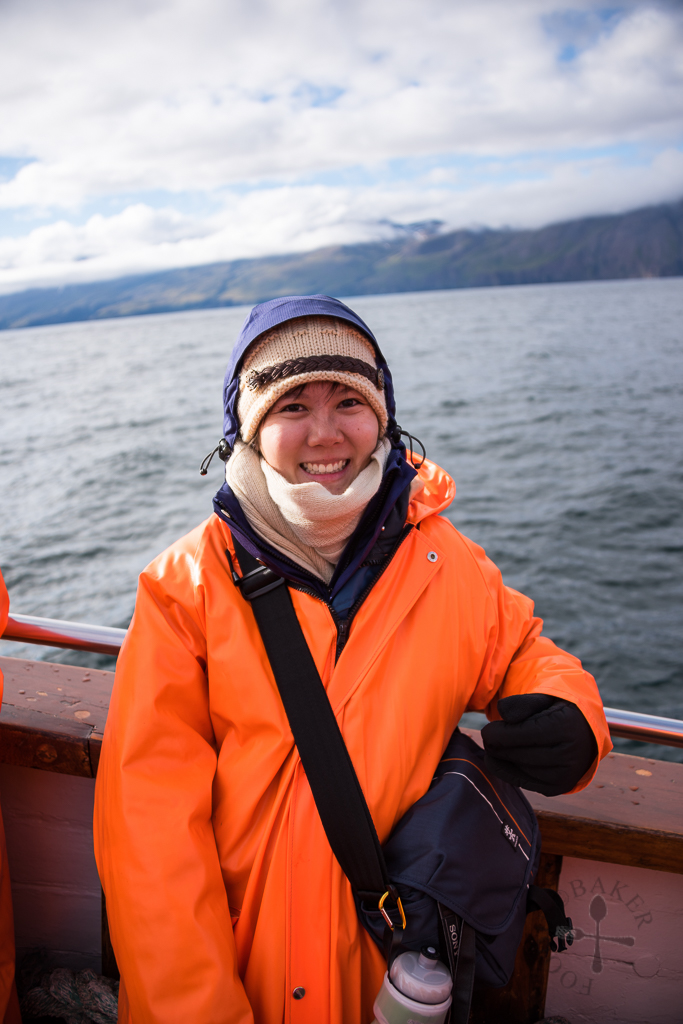 We were afraid of the cold weather, so we donned our jackets, windbreakers, scarves and gloves before the tour. After boarding the boat, we were given overalls and bright orange raincoats to wear, making us look like big, fat orange penguins. The overalls and raincoat were really thick, windproof and waterproof, so we were kept warm throughout the tour. I also popped some nausea relief pills before the boat set off as I have a knack of getting motion sickness. 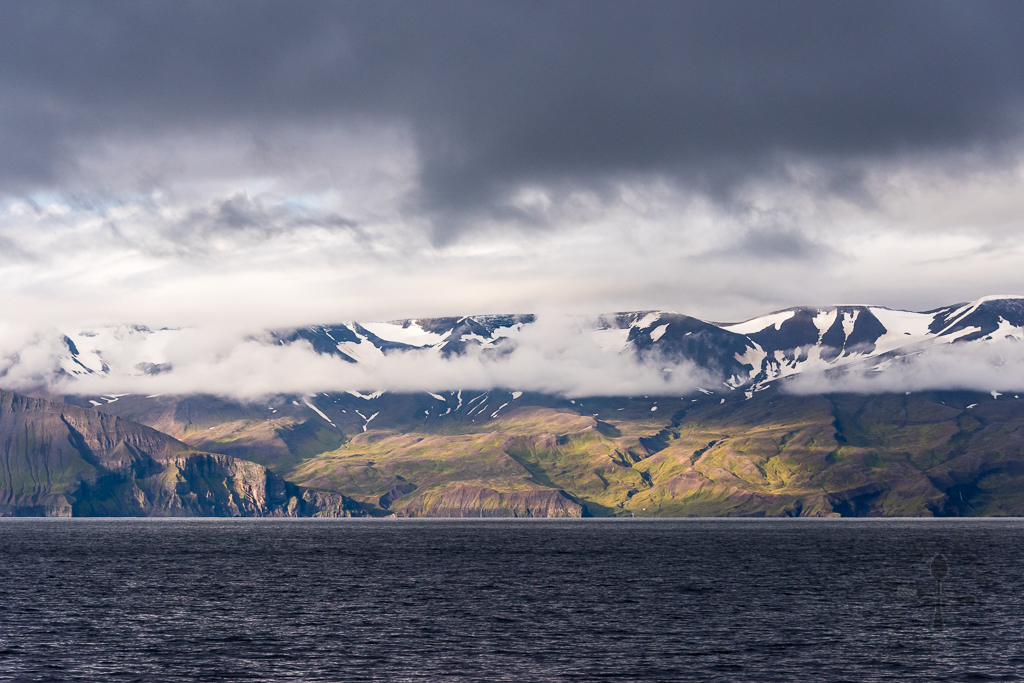 And off we go in search for whales! We were extremely lucky that the waters were relatively calm. Though the weather is cloudy, at least it’s not raining! We sailed out to the north for about an hour before we spotted our first whale… or rather, a pod of whales! 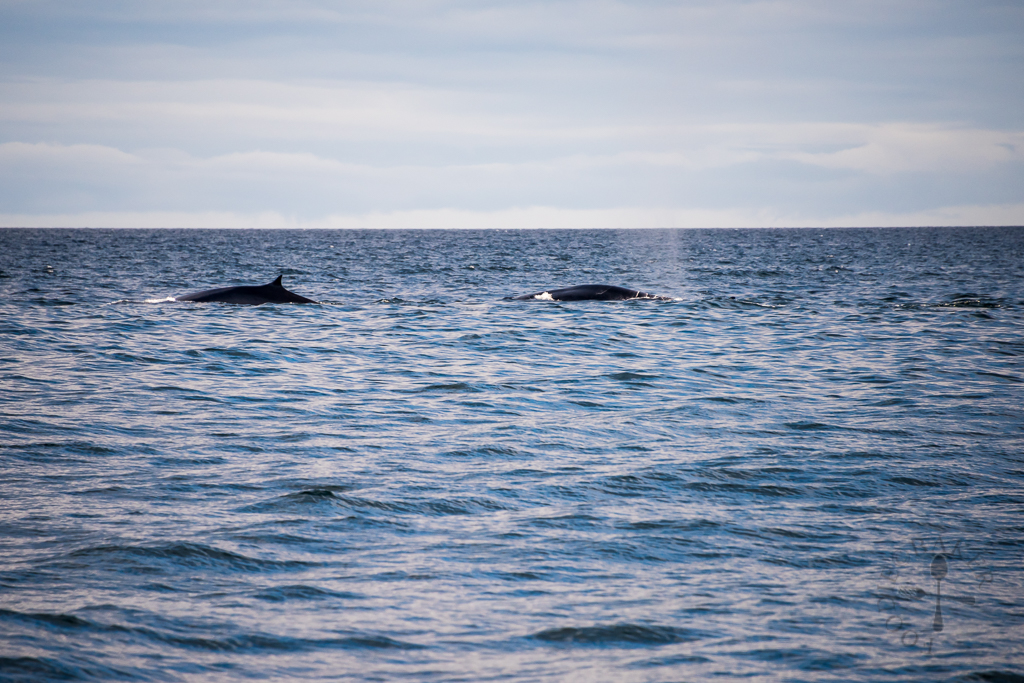 A pod of fin whales

The fin whale is the second largest animal on earth (after the blue whale). They are known to grow to more than 26 metres, though the average length is shorter. We spotted a pod of 4 fin whales and our boat chased after them for quite a while so that we can take photos to our heart’s’ content. 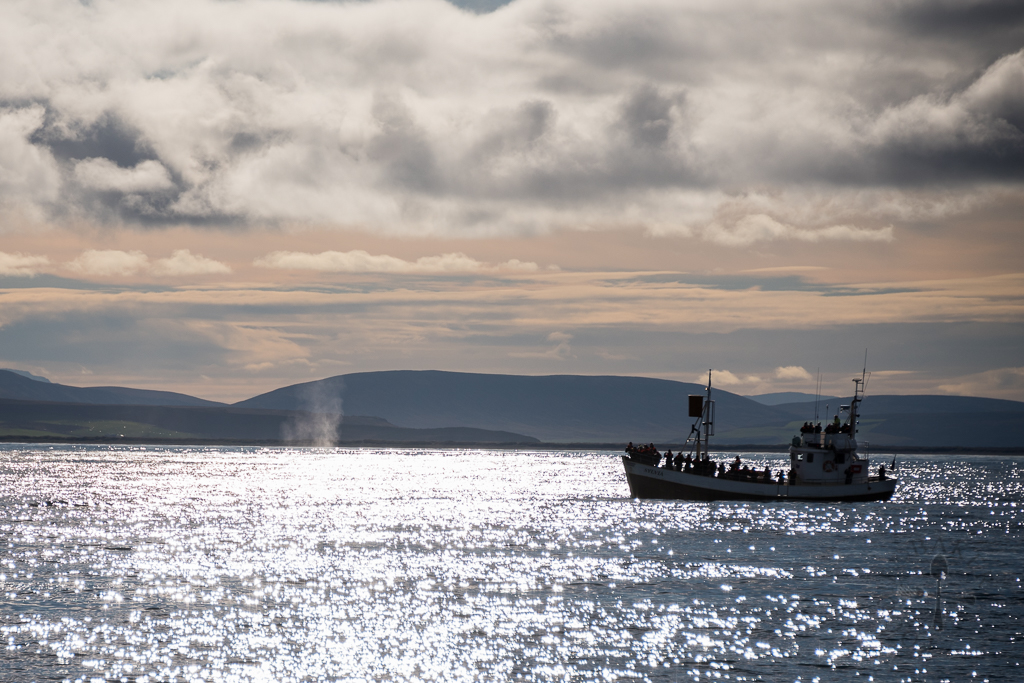 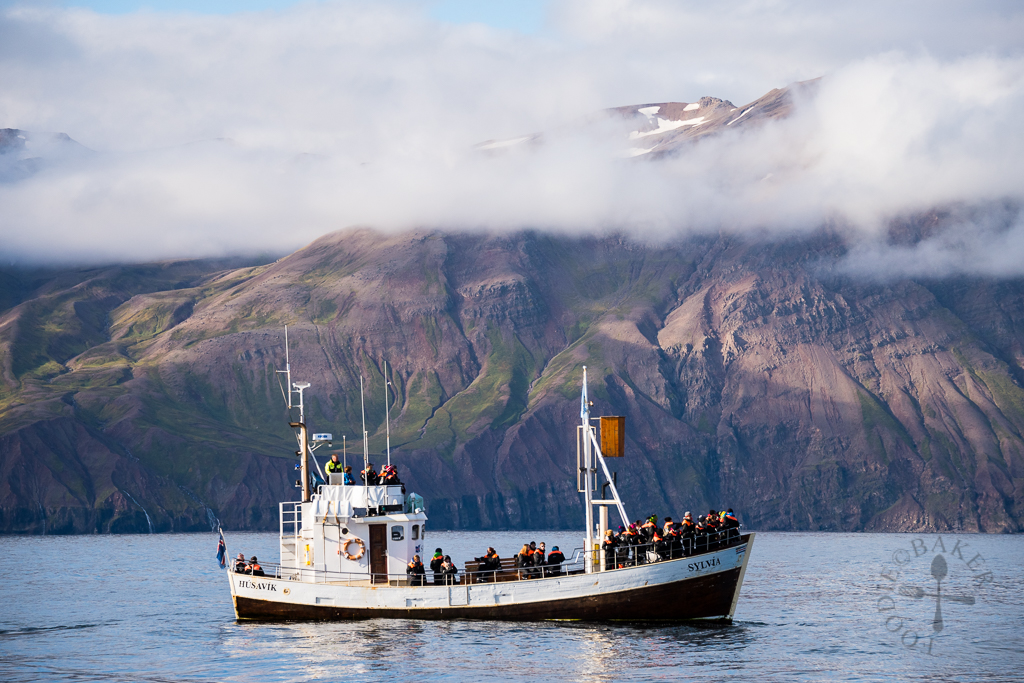 Another tour operator – we were all waiting for the humpback whale 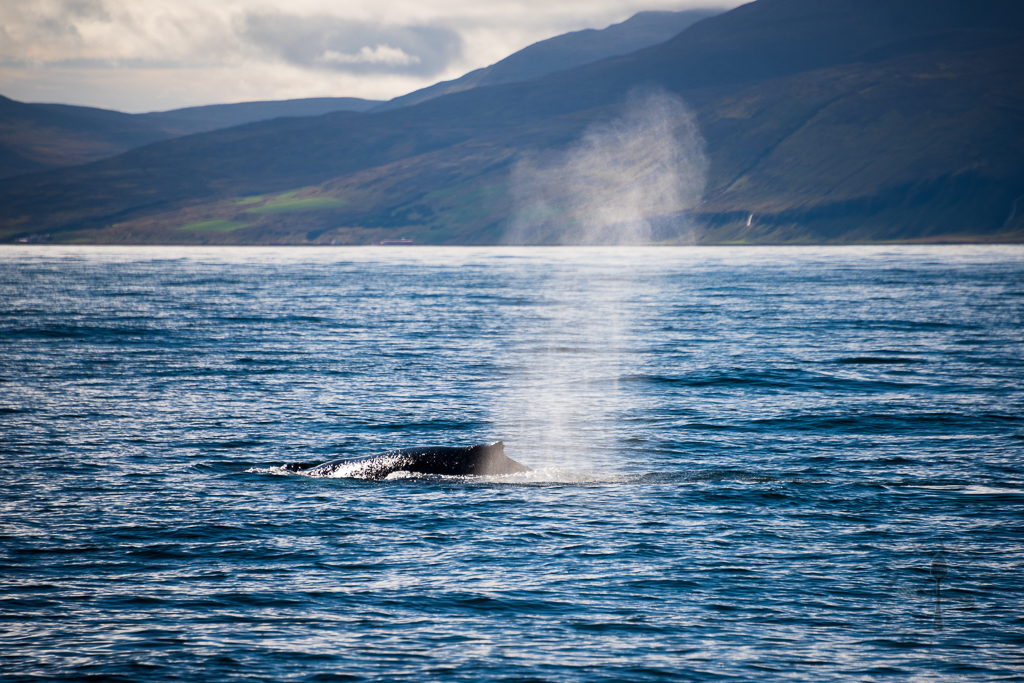 Coming up for a breath 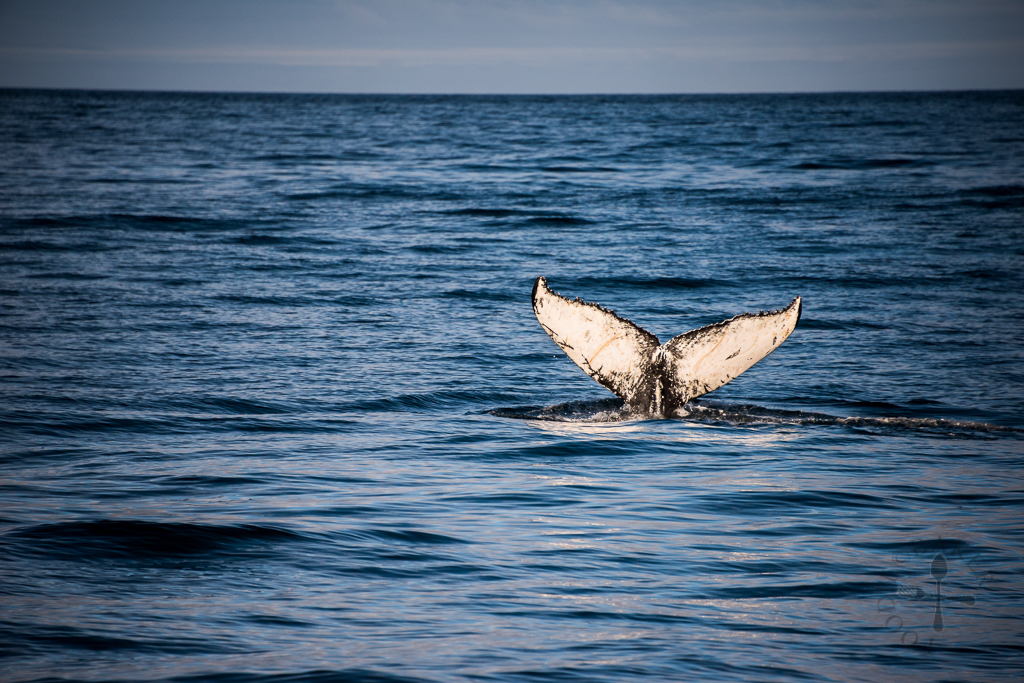 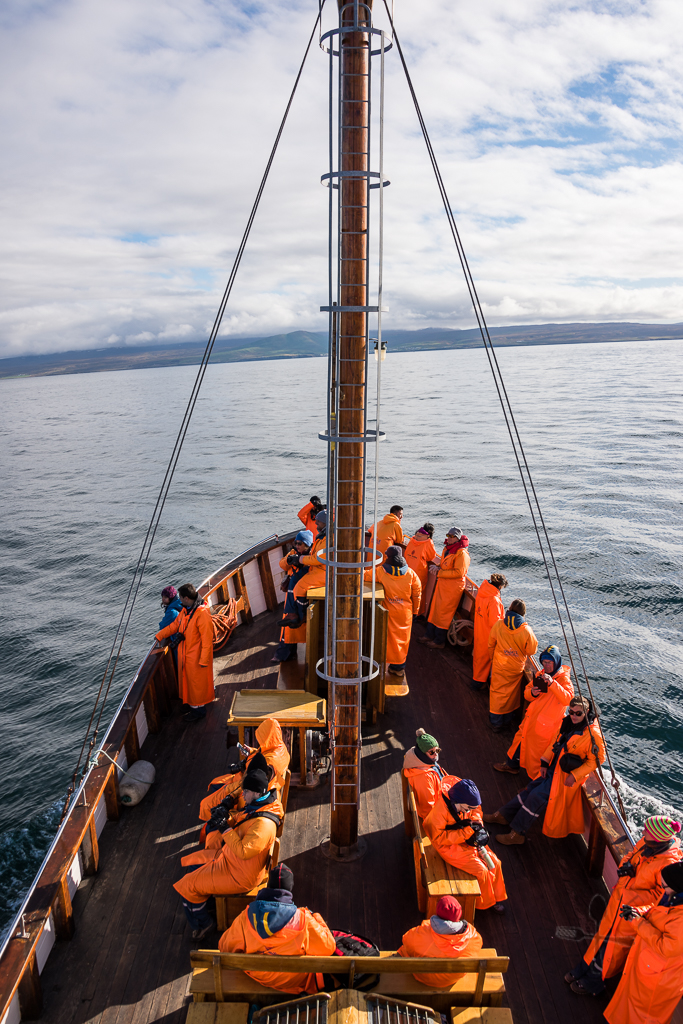 After about 2.5 hours chasing whales, we started to head back to the harbour. The staff gave out hot chocolate and cinnamon buns to all the passengers (to my delight as I was a little hungry oops!) Apparently minke whales were also spotted on our way back but we were too busy eating and drinking that we didn’t see it.

In the past, I went for dolphin-watching tours twice but I didn’t spot a single dolphin for both tours, so I was extremely excited and happy to be able to see whales on this 3-hour tour. I honestly feel that it’s definitely a tour worth going because it’s such a once-in-a-lifetime experience, even though it’s really expensive – ISK 8,400 per person (€62 / SGD 92.73). Do note that the whales won’t come so up close like those in posters – those moments are rare and we should be observing the whales, not disturbing them! 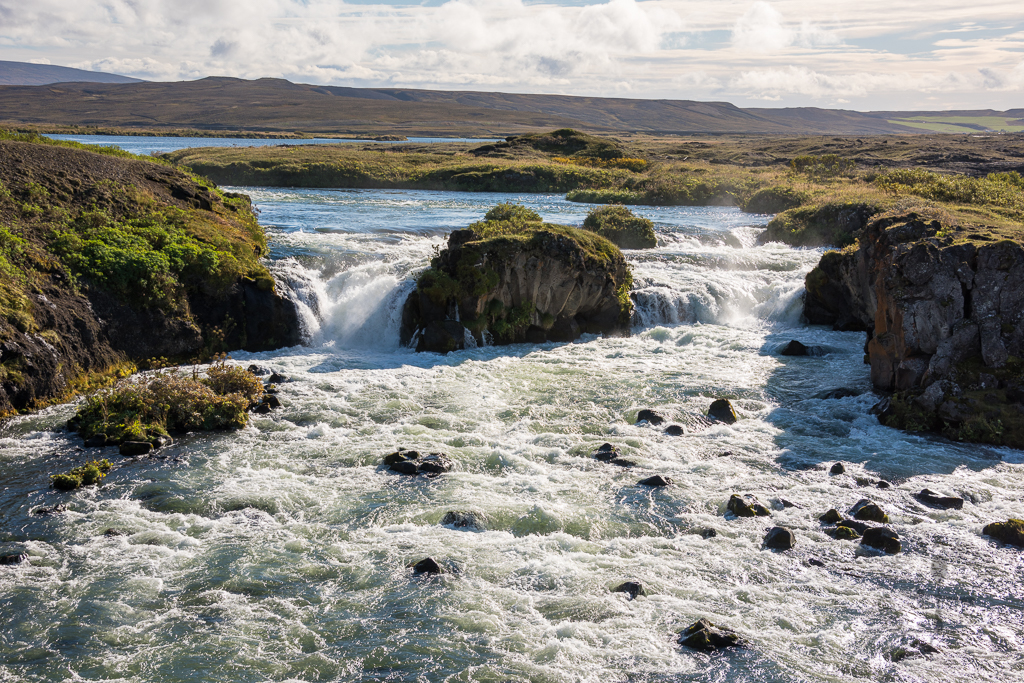 After our whale-watching tour, we head to the Bónus supermarket to stock up (read more about our Bónus shopping here!) I made some sandwiches with our newly-bought groceries and X drove us to the most perfect place for lunch – Æðarfossar.

Æðarfossar (aka Eider Falls) is located about 10 kilometres away from Húsavík, about 15 minutes drive. There was absolutely nobody there except for us and if not for the midges (black flies) buzzing around, we would have had our lunch at the small pavilion there. Nevertheless, X parked the car such that we were facing the waterfall, so we had the first-class seats to view the waterfall while having lunch! 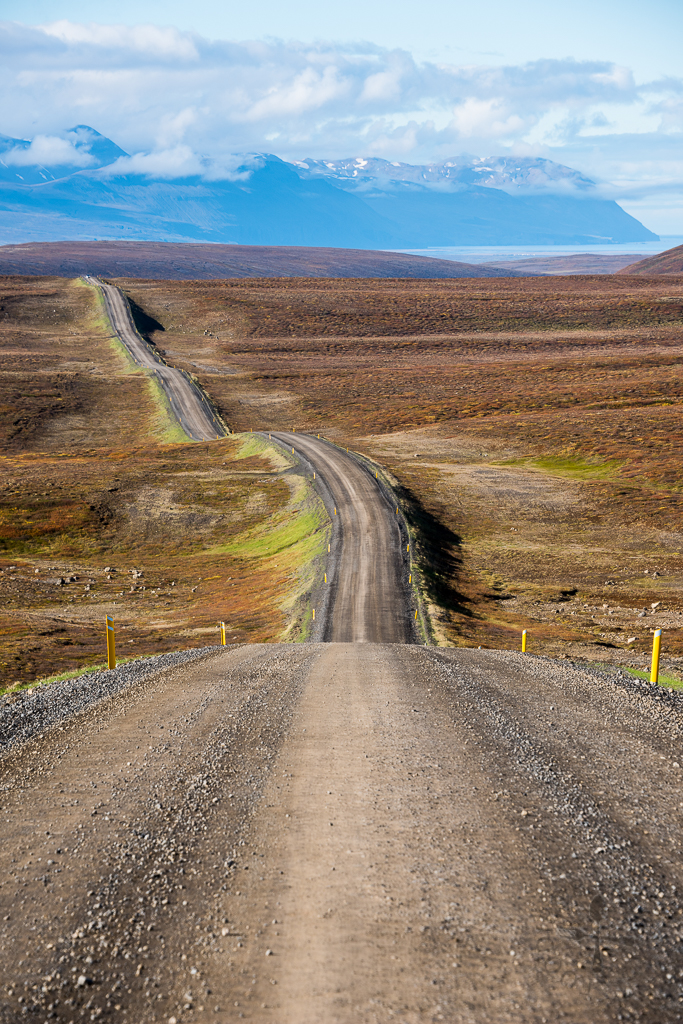 Driving back to Mývatn on Route 87

After finishing our sandwiches, we head back towards Mývatn. As we were driving on Route 87, the views were so beautiful that we couldn’t help but stop and take some photos. 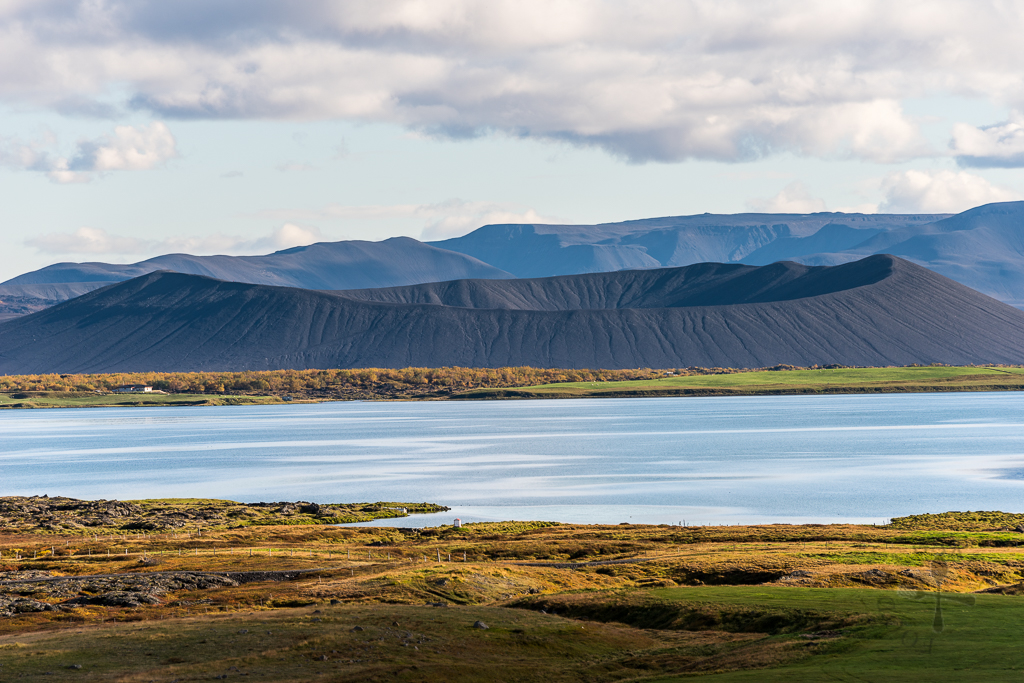 Hverfjall (aka Hverfell) is a crater formed approximately 2,800 – 2,900 years old (how did the experts estimate that I have no idea!). About 1 kilometre in diameter and 140 metres deep, one can hike up to the rim of the crater. 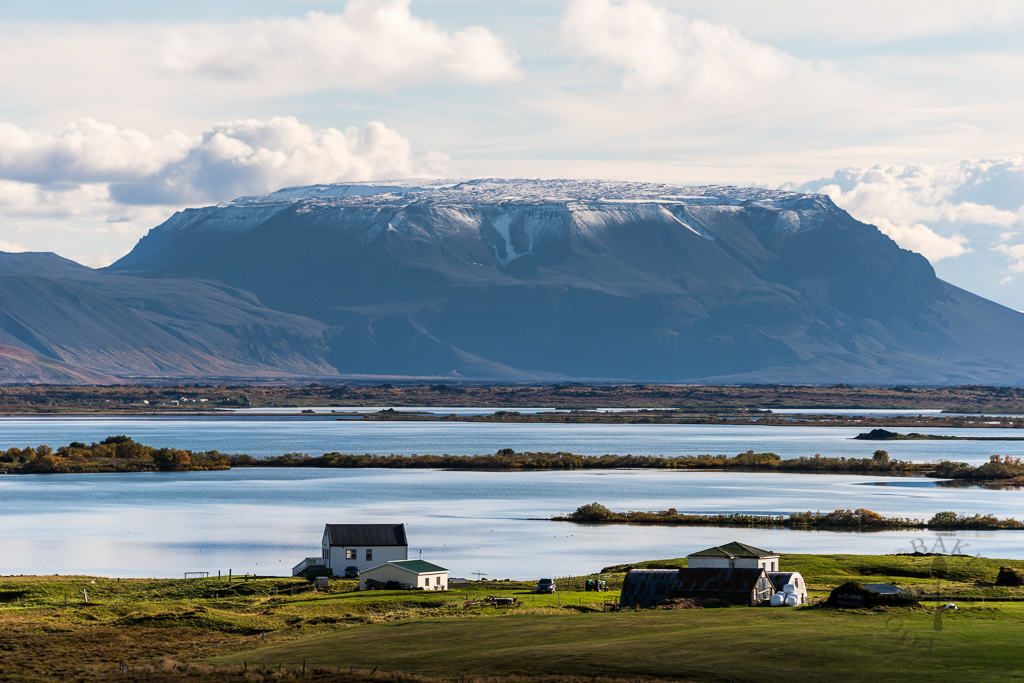 Many mountains around Mývatn were formed by eruptions under the ice sheets during the glacial periods of Ice Age. Eruptions that melted their way through the ice will form a flat-top mountain, known as table mountains. With an altitude of 1,222 metres, Mt Bláfjall is one such mountain.

*Route 87 is a gravel road, so do beware of small rocks flying up and hitting your windscreen! (Usually insurance do not cover damage to windscreen.) 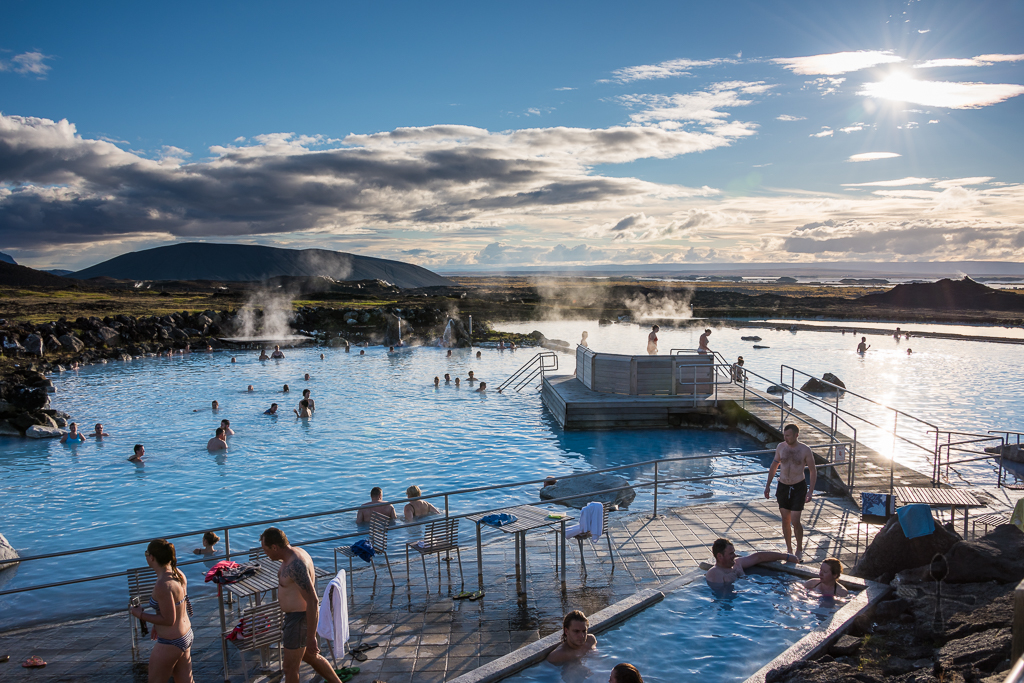 We dipped in the man-made hot springs for about 45 minutes (there’s nothing to do there so it can get quite boring) before we shower and head off. (The shower only has one type of soap for both hair and body, so you might want to bring your own shampoo and soap.) Our bodies were so warmed up after the dip that we can walk out to our car without wearing our jackets and not feel cold at all! 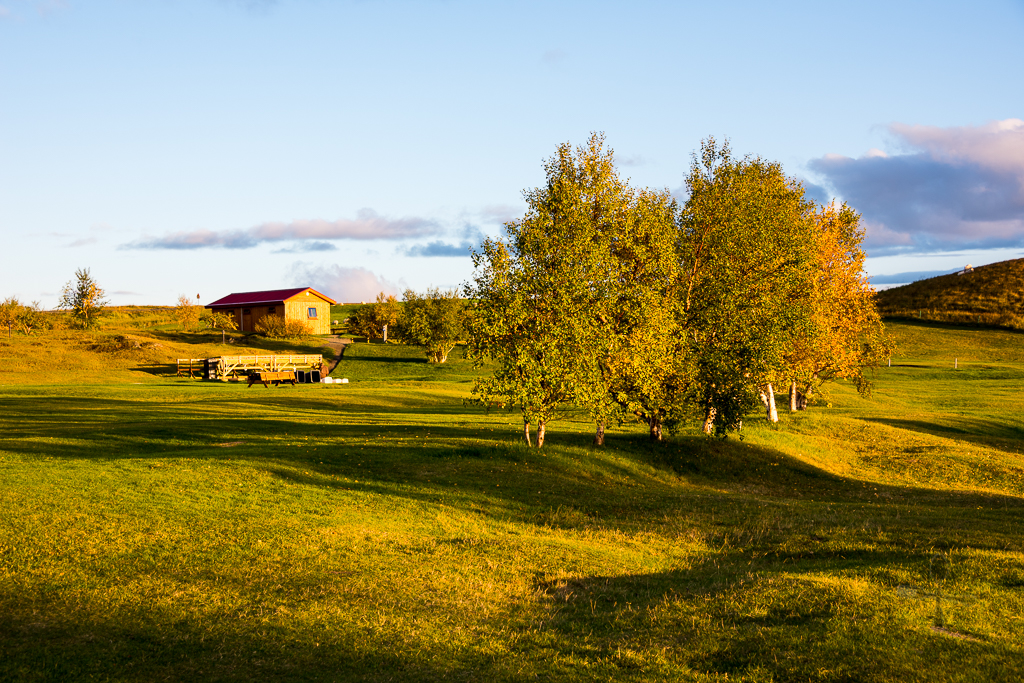 We camped at Mývatn campsite (65.640243, -16.915089) for the night. X went around taking sunset photos while I prepare dinner. As summer is ending, the operators of the campsite closed half of the campsite so we can only shower/wash up in the main service house. As we continued on our journey, we had to camp more often in the wild as many campsites had closed for the year. 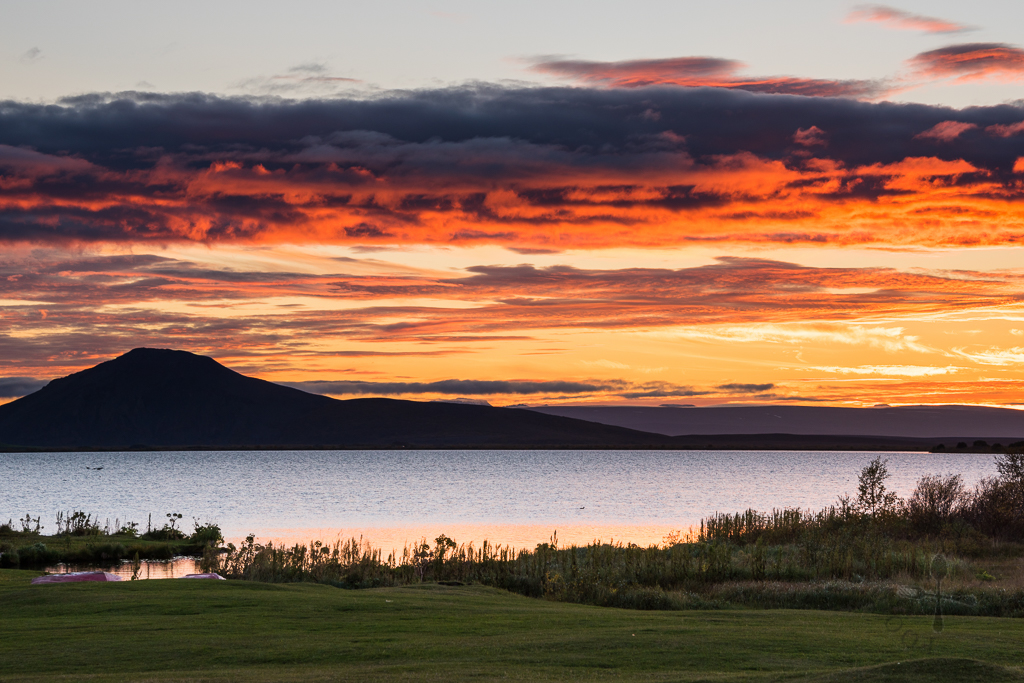 We hiked around Mývatn the next day before departing to see another magnificent waterfall and a cutesy Christmas house! Stay tuned for the next travelogue!