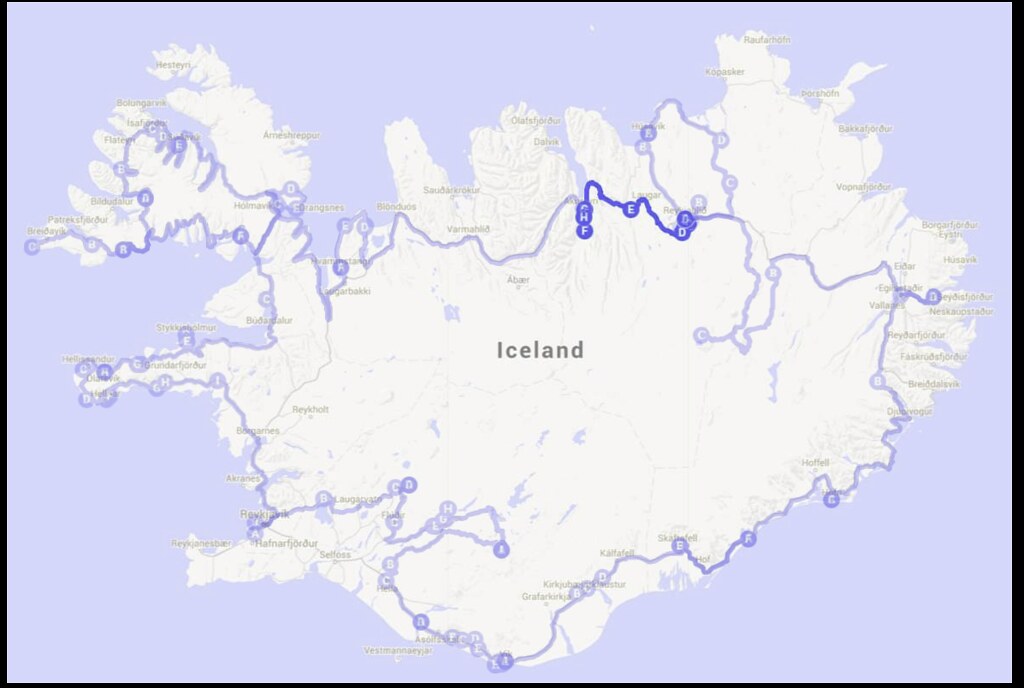 4 degrees Celsius! That's the temperature we woke up to on Day 13 morning, brrr! Our plan for the day was to drive around Mývatn then head to Akureyri. After a quick wash up and breakfast, off we go!

Grjótagjá is a small lava cave with a thermal spring inside, located only about 10-minute drive away from Mývatn campsite. It was a popular bathing place for several decades until the 1975 to 1984 Krafla volcanic eruptions, which caused a sharp rise in the water temperature to nearly 60 degrees Celsius. Though the water today is in the range of 43 to 46 degrees Celsius, bathing is no longer allowed. If you are a Game of Thrones fan, this place was used for filming the fifth episode of the third season.

Entering the cave was relatively easy but do watch your footing as you don't want to slip and fall inside or into the water as it is filled with many sharp rocks!

Note: 30 minutes is about all you need at this place!

Dimmuborgir, meaning "The Dark Fortress", is perhaps one of the best places to observe and view lava fields. Filled with massive lava formations caused by eruptions 2,000 years ago, whether you view them from afar or up-close, it is hard to forget this moon-like experience. Autumn is slowly creeping into Iceland by the time we visited Dimmuborgir, hence the leaves were all turning into beautiful shades of orange and yellow - simply amazing! If you visit during winter, I can only imagine an extremely stunning black-and-white photo.

I won't go into details on how the lava formations are created (you can find them in Wikipedia), but we learned that a conservation program was initiated in 1942 to preserve Dimmuborgir from erosion as the lava formations are brittle and fragile. So please stick to the walking paths and do not walk into areas that you are not supposed to!

There are several hiking paths in Dimmuborgir, ranging from 15 minutes to 1 hour. We took Kirkjuhringurinn ("The Church Route"), an approximately 2.4-kilometre hike (about 1-hour hike), which led us to the Kirkjan ("The Church", duh!) which features a large enclave that travellers can walk through (and do some silly shots there). The terrain is relatively flat with a few steps here and there, so it's a very easy walk.

Note: We spent about 2 hours here - it can be quite easy to get lost while hiking (because all the lava formations look similar after a while), so stick to the colour of your hiking path! 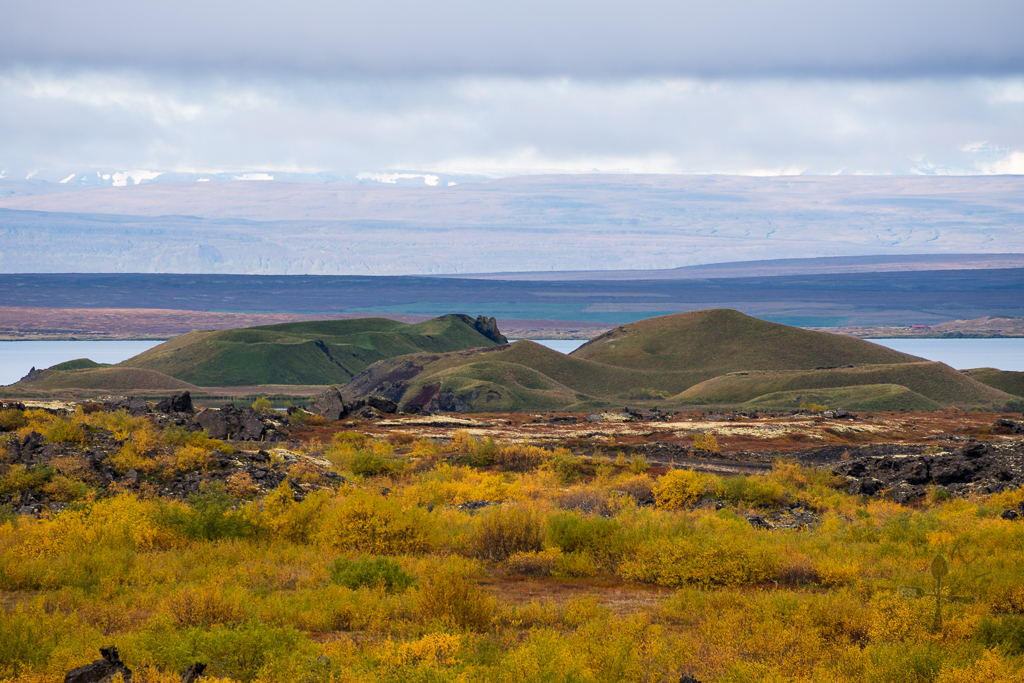 We cruised beside Lake Mývatn on Route 848 while heading to our next destination and the views were beyond beautiful! I didn't pinpoint where we took the photos from, but it's between Dimmuborgir and Skútustaðir pseudo craters. The only annoying thing has got to be the midges - black flies that kept buzzing around. It definitely not as bad as this YouTube video because it's already September, but still irritating nonetheless! 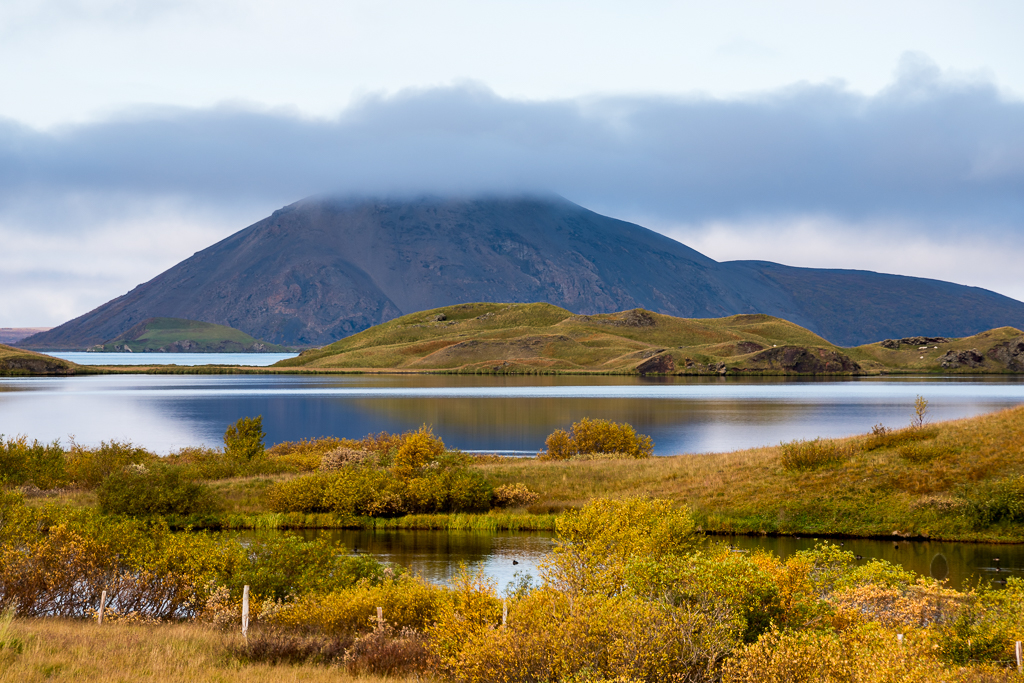 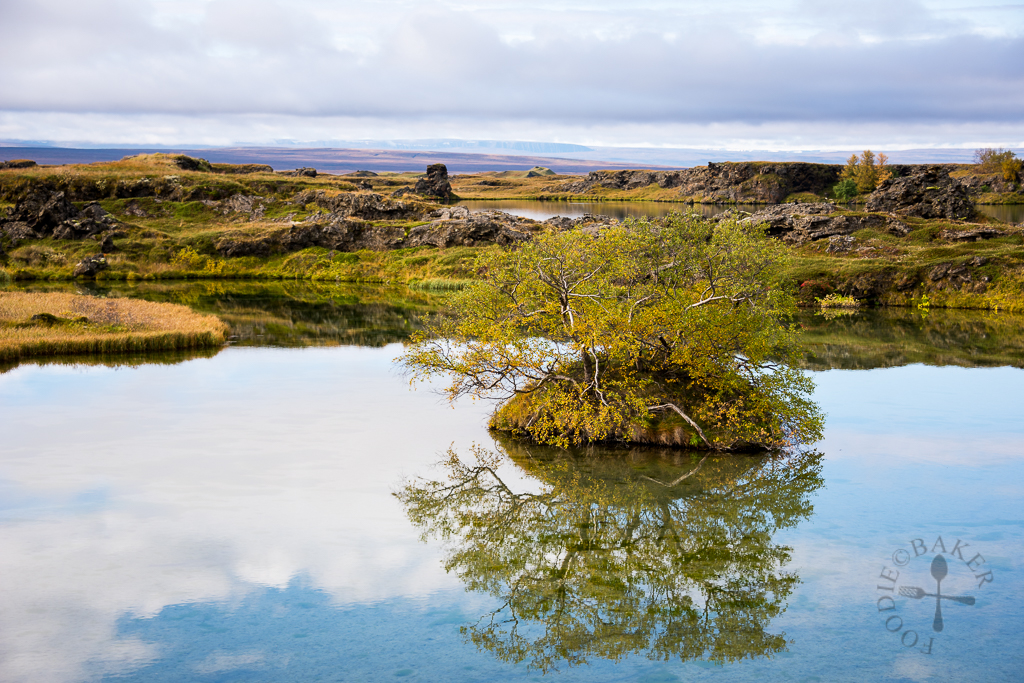 The Skútustaðir pseudo crater is popular because one can hike up to the rim of the pseudo crater and have a splendid view of the surroundings. There were some unfriendly sheep grazing away nearby, unfriendly because they ran away when we approached them.

After hiking back to our car, X drove a bit more on Route 848 then joined back to Route 1 as we head to another waterfall in Iceland, Goðafoss, which took us about 40 minutes to reach there.

In the year 1000, the chieftain of Ljósavatn district and Lawspeaker of the Althing, Þorgeir, was entrusted with the important task of deciding whether Icelanders should adopt the Christian faith. When his decision was officially accepted, he went home (I guess he happened to be living near this waterfall at that time) and threw his statues of pagan gods into the waterfall - and that is how this waterfall came to be known as Goðafoss, "Waterfall of the Gods". 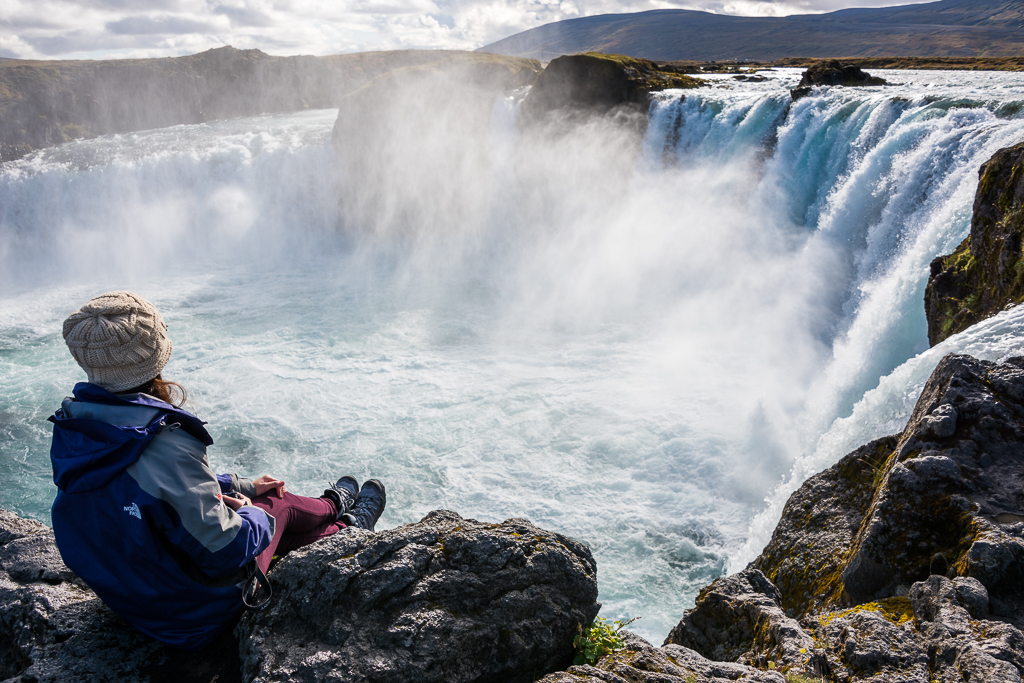 Falling from a height of 12 metres over a width of 30 metres, Goðafoss is located along Route 1, hence it attracts plenty of travellers to view this waterfall at all times. Even though we had seen plenty of waterfalls since the start of our trip, I can never get sick of seeing more of them because each and every waterfall is so unique! Goðafoss is extremely magnificent and thankfully we had the luxury to spend as much time as we want at this waterfall!

After a 45 minutes drive from Goðafoss, we reached Jólagarðurinn, a Christmas garden located very near Akureyri. The bright red cottage looks just like the cookie house from Hansel and Gretel, though unfortunately (or fortunately?) it's inedible.

The cottage housed 2 storeys of Christmas decorations - though most of them were not within my budget and not made locally. I wanted to get a souvenir here but couldn't find one I like that's made in Iceland.

Jólagarðurinn is open all year round and the opening hours can be found here. If you happen to be nearby and are looking for some Christmas souvenirs, do head over there for a look!

Akureyri, the Capital of the North, is the second largest city in Iceland with a population of about 17,000 people. There's not much sightseeing to be done here, so the only photo we took is Akureyrarkirkja, a Lutheran church completed in 1940. And as cities usually offer more food, we decided to eat out for dinner!

After some Googling, I decided to skip the restaurants and eat a simple, comforting and no-frills food - fish and chips at Akureyri Fish & Chips.

We ordered a fish soup, fish and chips, mussels with fries (changed that to sweet potato chips which cost us ISK 60 more) and the bernaise sauce, so the total bill came up to be ISK 5,570 (€41.46 / SGD 62). It's definitely not a cheap fast food meal!

The fish soup had nice chunks of fish meat and was thickened with coconut milk, though we would prefer it to be thicker so that we can eat it with bread. The mussels, though small in size are fresh and came in generous portions. They were served with beetroot spirals which made me feel like getting a spiralizer because they look so pretty! The fish and chips and fries (especially the sweet potato fries) were simple yet done perfectly, so we were extremely satisfied at the end of our meal, yum!

We originally wanted to camp at Akureyri campsite (65.677974, -18.100790) but it was already closed for the year so we ended up at Hamrar campsite (which is opened all year round) (65.648005, -18.104987), about 10-minute drive away from Akureyri. We passed by a few farms on the way to the campsite and there are many Icelandic horses there, perfect for taking selfies with them! At the campsite, there is a gantry to enter (for vehicles) but if the warden is not in, you can press a button for the gantry to be lifted so you can drive in to park. There are quite a number of restrooms and showers and they are equipped with free flow hot water. The campsite is also equipped with a washing machine and dryer that can be operated with ISK 50 or ISK 100 coins - you can change them with the warden. Our warden came back really late that night so we ended up washing our clothes the next day morning. As of 2016, the price is ISK 1,300 per person (€9.67 / SGD 14.46).

We had an extremely long drive the next day and would be heading to a popular spot to watch seals, so stay tuned to see some of those chubby cuteness!