Oops! I'm finally here to blog about one of my many overdue trips! In November 2013, X and I took a week off to travel to Cambodia. Our aim is to cover the two largest cities - Phnom Penh and Siem Reap.

Cambodia is a country located in the southern portion of the Indochina Peninsula in Southeast Asia, bordered by Thailand to the northwest, Laos to the northeast, Vietnam to the east, and the Gulf of Thailand to the southwest. Phnom Penh is the capital of Cambodia and during our stay here, we learned a huge amount of history of Cambodia, especially during the Khmer Rouge regime, which will be covered in the next post.

Our first day in Phnom Penh was spent wandering around the city area, visiting the touristy sites - and the first and most popular place to start would be the Royal Palace, where the current Cambodian King resides.

When we reached the palace, there are guides stationed there offering their services. Priced at USD 10, we felt that it was quite reasonable and I think it was worth it for without the guide, we will be pretty clueless about the history and structure of the palace. I think there are mandarin and even Japanese-speaking guides there.

The first sight that I marvelled at is the cannonball tree (can't help it, the flowers are so pretty!) Cannonball trees can grow up to 35 metres in height. The beautiful and huge reddish pink flowers bloomed in large bunches - some trees can bear 1,000 flowers per day. The large, woody and round fruits gave this tree its name. Measuring up to 25 centimetres (around 9 inches), it is no joke if it falls on people!

Our guide continued to guide us around the Royal Palace. Now, are you wondering why commoners like us can walk around so freely in the palace when the King is residing there? The Palace grounds are opened to the public except for the sections that the King is residing -  so these areas are blocked off.

Our guide led us to the Throne Hall, a cross-shaped building, now used to host important, royal ceremonies. There is a royal throne inside the Throne Hall, which the King can only sit on it once in his lifetime - during his coronation!

If I didn't remember wrongly, photography is not allowed inside the buildings themselves, hence we only have exterior photos of the buildings.

Another iconic structure within the Royal Palace compounds is the Silver Pagoda. It is a royal temple which houses many national treasures - from silver to gold to crystals to diamonds. Even the floor is laid with more than 5,000 silver tiles! The staff laid carpets on top of the silver tiles so that we can walk through the pagoda, while admiring the many gold and jeweled Buddha statues.

The whole tour took only about 1 hour, and we spent only a bit more time there taking photos of the palace.

Getting there:
Address: Samdech Sothearos Boulevard
2 km from Wat Phnom 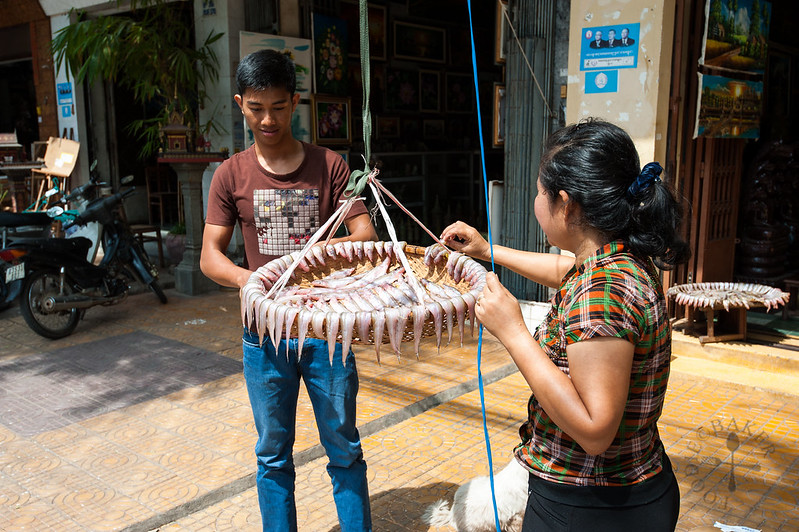 After the tour, we decided to just walk around the city and explore the local life. Above are some locals drying small fishes, probably salted fishes? It is a very common sight in Cambodia. 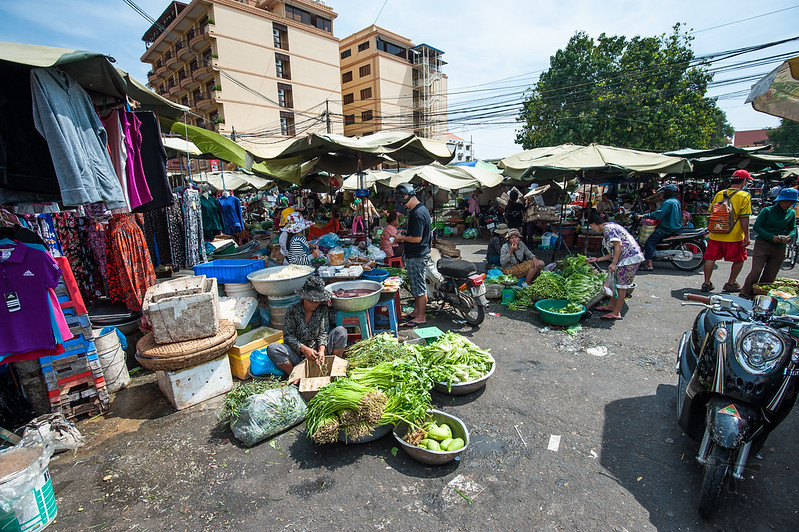 Since I'm such a foodie, how can I miss the local markets? Happened to pass by a local market and despite the unpleasant smell, we headed in for a look. 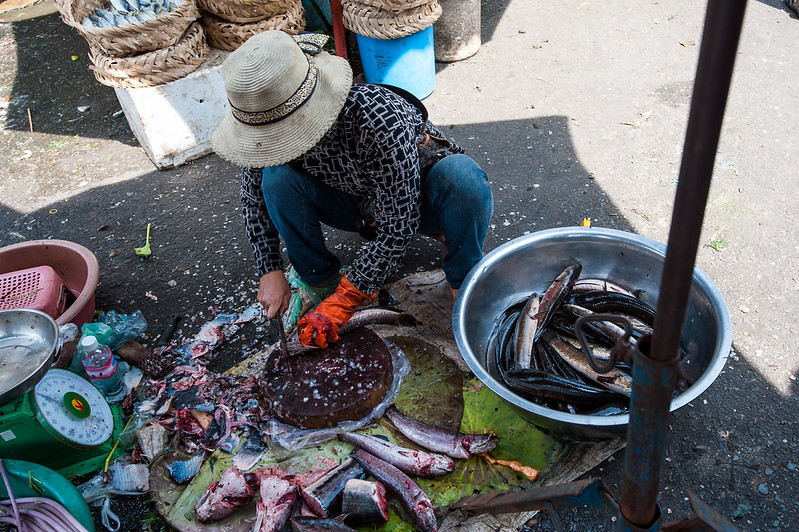 The fishmonger is scrapping off the scales and gutting the fish, preparing them for sale. 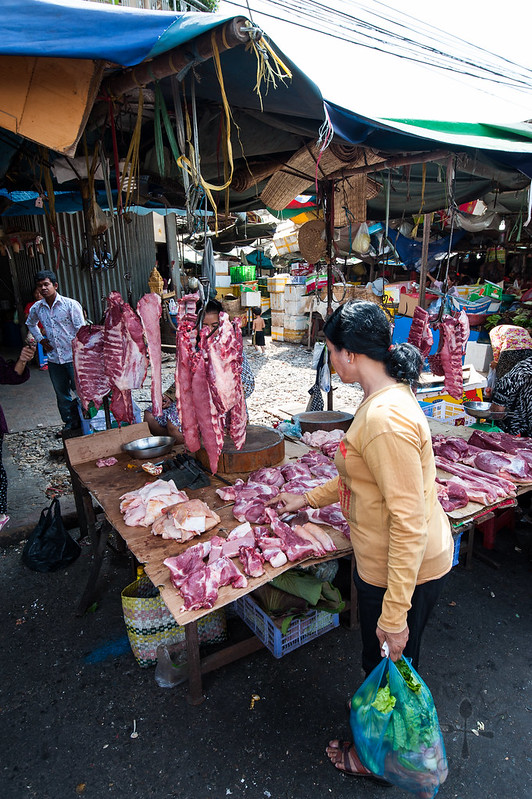 Slabs of meat for sale while the flies ravaged the selection - the place is rather unsanitary... 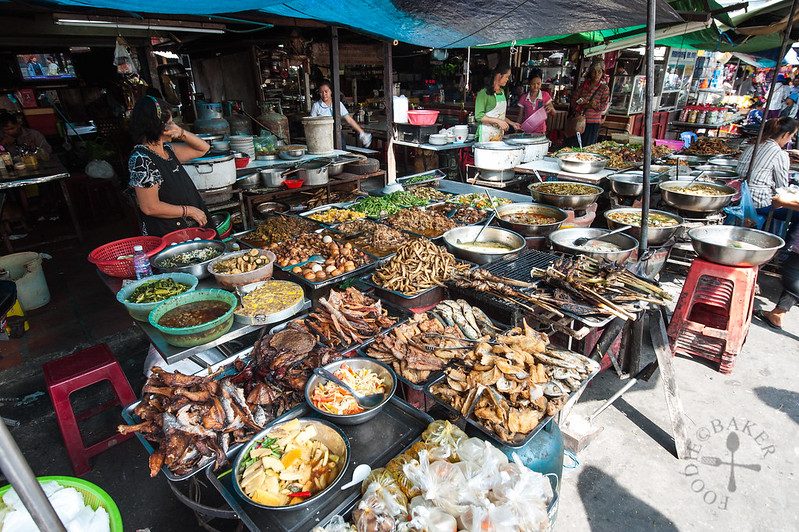 A wide variety of cooked food as side dishes for lunch/dinner.

Next we continued our own tour to the Central Market. Central Market is a large building constructed in 1935 with four wings. Each wing is filled with shops selling gold and silver jewelry, antique coins, counterfeit consumer goods such as watches and sunglasses etc. Around the building are stalls selling clothes, souvenirs, scarves, household items etc. It is a major attraction for tourists where bargaining is definitely required.

Unfortunately we don't have much interest in the items here so we didn't spend a long time here.

Location:
At the meeting point of Kampuchea Krom and Street 63

Wat Phnom is a Buddhist temple built in 1373, and stands 27 metres above the ground. It is the tallest religious structure in the city. At the base of the hill, there is a giant clock which was originally from France and installed in the 1960s. In 2000, the clock was replaced by a newer version as a gift from China. Up the hill there is a ticket seller who will charge you US$1 for the visit to the temple. There was no official booth, so we have no idea how legit are these ticket sellers.

Sisowath Quay is probably my favourite place in Phnom Penh - a historic riverside parallel to Sisowath Boulevard in the Chamakarmon district, this 3km strip is lined with hotels, restaurants, bars, cafes and shops. In the evenings, locals will gather at that area for various activities. I love sitting along the quay, enjoying the breeze and just people watch. 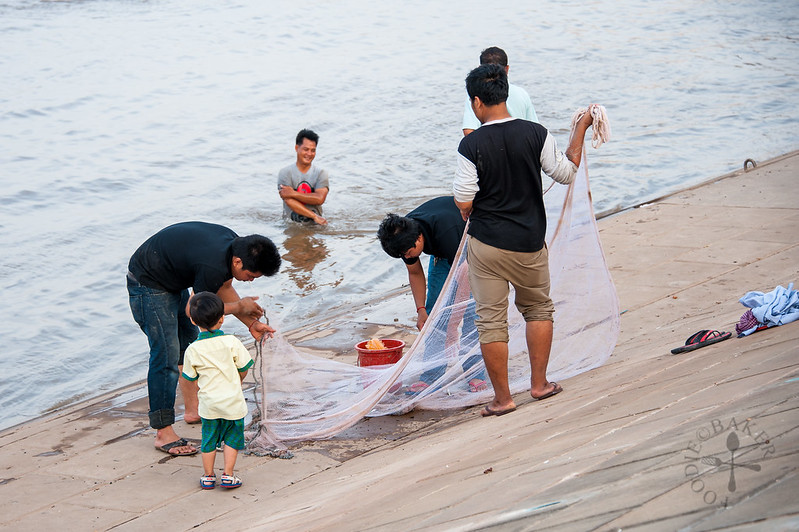 There are a lot of locals gathered along the river with fishing nets. It is definitely not easy spreading the huge net out! 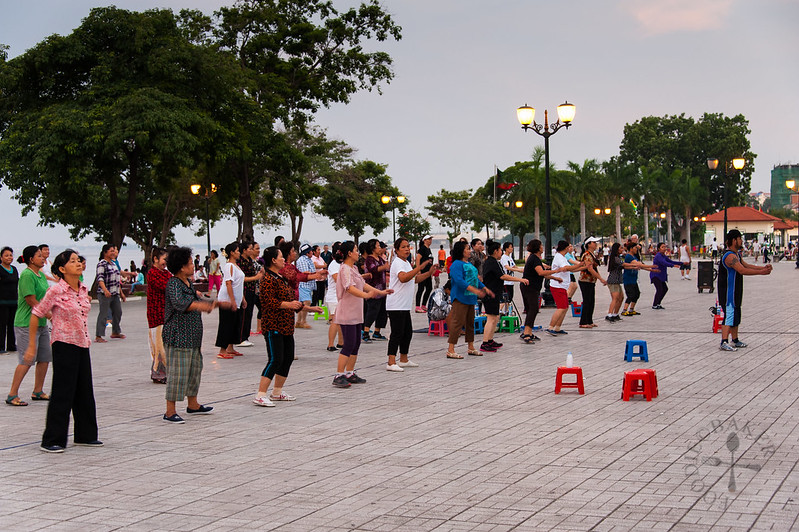 Dancing looks super fun too! With an instructor in the front and everyone grooving to the beat.

We also saw some uncles playing sey, a traditional Asian game in which players aim to keep a heavily weighted shuttlecock in the air by using their bodies, apart from the hands. In Singapore, it is usually known as chapteh. These uncles are playing it very artistically, showing off their skills! We were really impressed by how good they are - I don't think I can keep it up in the air for longer than 10 seconds...

And that's all for the city side of Phnom Penh! Wasn't able to find any delicious Khmer cuisine during the whole trip so sadly don't have any food to blog about. Stay tuned for the next post of Phnom Penh!