Sentiero Degli Dei, translated as Path of the Gods, is the most popular hike in Amalfi, and it's no wonder as the views are immensely beautiful! When we were there in April, there were very few people hiking the path, so there were plenty of moments of tranquillity and serenity. The hike runs from Bomerano (Amalfi side) to Nocelle (Positano side) and while you can start from either side, I highly recommend starting from Bomerano (Amalfi side) - you will know why at the end!

P.S. This is a scheduled post as I'm currently away on holiday! Thank you for visiting and leaving behind sweet comments! My apologies as I won't be able to visit your blogs during this period. Do follow me at Instagram (@foodiebaker) to see what I am up to in Iceland!

Starting from Bomerano (Amalfi side)

Before you start, do stock up on some drinks and food (like sandwiches and snacks) wherever you are at as it's going to be a 3 to 4 hour hike, and you won't be able to get any food during the hike. There is also a cafeteria at Bomerano (see photo below), so you can buy some food there too if you prefer.

To get to Bomerano, first you'll have to get to Amalfi. We left Sorrento in the early morning and took Sitabus #5070* to Positano, where we would be spending a night at. After dropping our luggage at the BnB, we headed out to the nearest bus station and caught Sitabus #5070* to Amalfi.

We then boarded the Sitabus #5080* from Amalfi to Agerola. I doubt you will miss it as many tourists will be boarding that bus too. After a 25-minute ride, alight at Bomerano - again, you don't have to worry about missing the stop, because most of the people aboard the bus will be alighting at Bomerano too - but of course you can double check with the bus driver.

The bus tickets must be purchased in advanced in "tabaccherie" (cigarette shops), newspaper stands, bars or cafeterias. The hourly tickets cost €2.20 each while the 24-hour tickets cost €8 each. So... do your math and see which one is more worth it!

*The numbers are not the bus plate numbers, they are just reference numbers so that you can find the timetable of the Sitabus on their website (in case the links provided above don't work.)

One thing to take note is that the Sitabuses will leave from the terminals on time but may not reach the destinations on time due to traffic conditions - given the winding roads along the Amalfi Coast, it's perfectly understandable. Do take note especially when you are planning back-to-back bus trips. We originally wanted to take the 1015 bus from Amalfi but we missed it by a few minutes, so we ended up having to take the 1230 bus. As it was still spring, the weather was a lot more forgiving. After alighting the bus, you will see a cafeteria and a bar and just next to the bar is a signboard directing you to the hike.

Getting to the hike shouldn't be difficult - just follow the signs!

If you had downloaded an offline version of the map onto your smartphone via Google Maps, you can use GPS to locate where you are on the map - no data is required!

Halfway through the hike, we noticed that there are numbered tiles being attached to rocks - then we realised they are like checkpoints - and it's a good thing they are numbered because you can countdown together with them!

The numbered plates also had an emergency number - a number that is good to know but wish that you'll never need to use it. Besides the numbered plates, rocks painted with those white and orange stripes can also be found along the path - we are guessing that they are markers for hikers to stay on the path.

And when you see the above kiosk, this means that you have completed the hike and reached Nocelle, a small town of Positano, resting at 400 metres above sea level. 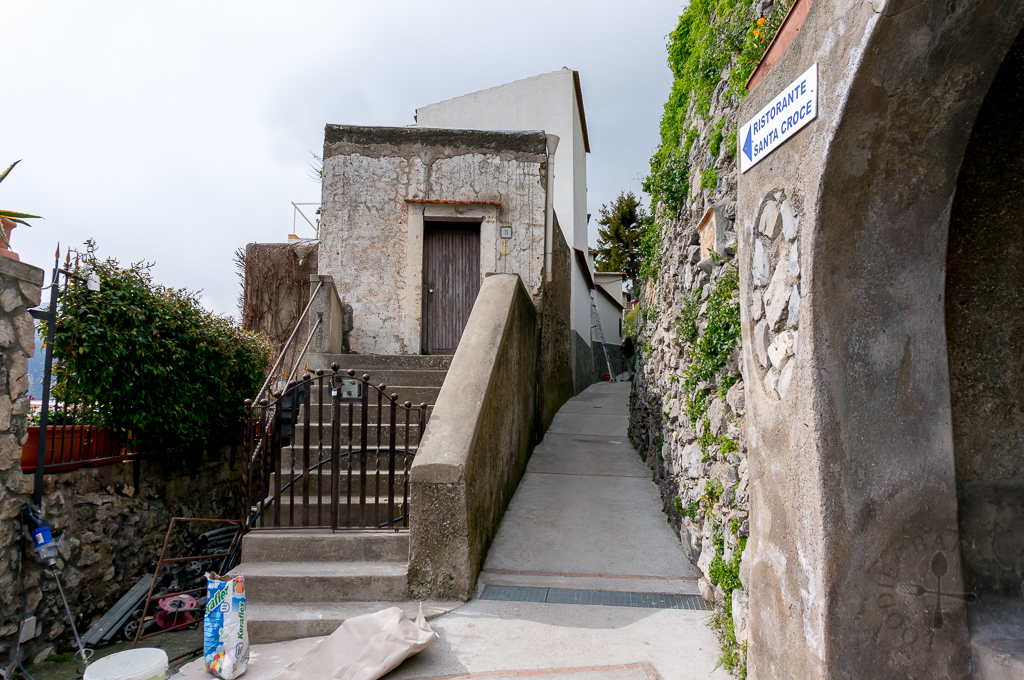 Since we had worked so hard to complete the hike, it's only right that we reward ourselves with a break! We headed into this small alley to reach Ristorante Santa Croce, a restaurant operating since 1961.

The restaurant has an unobstructed view of the coastline, so you can enjoy the view, rest your legs, sip a glass of wine and have a meal there after the long hike. We were lucky we managed to reach just before their last order closed - I was absolutely famished! The restaurant does not offer much - menu can be found here and here.

X ordered a pasta dish - the pasta is perfectly al-dente with a good serving of squid and shrimp in tomato sauce. But I was so more in love with the plate - it's so beautiful!

I ordered the daily fish with potato in a white wine sauce - it looks really simple and that's the beauty of it because the freshness of the fish really stands out. The aromatic white wine sauce does not overpower but complement the fork-tender fish meat. Delicious!

The total bill came up to €35 for the 2 of us (we didn't order any alcohol), a little expensive but we left full and satisfied.

And here's the main reason why you should not start the Sentiero Degli Dei (Path of the Gods) hike from Nocelle side - in order to get to Nocelle from Positano, you will need to walk up approximately 1,800 steps! We counted the steps and ended up with 1,770 (we did it to keep ourselves entertained while climbing down), but we may have missed out or double-counted some of the steps. It took us about 45 minutes to reach to the bottom - can you imagine if you do it the other way round? I think I'd be so drained of energy that I won't be able to do the Sentiero Degli Dei hike any more.

But of course there are other ways to get from Positano to Nocelle (and vice versa) without climbing the steps - by bus or taxi. The Positano local bus, Flavio Gioia, provides transport between Positano and Nocelle and the Facebook page I've linked have the bus timetables. As I have no experience in taking the bus, I'm not sure where to board and all, so it'd be best to check with the locals (or check with the restaurant staff before leaving!)

Finally we reached the end of the steps! It was a really long walk down!