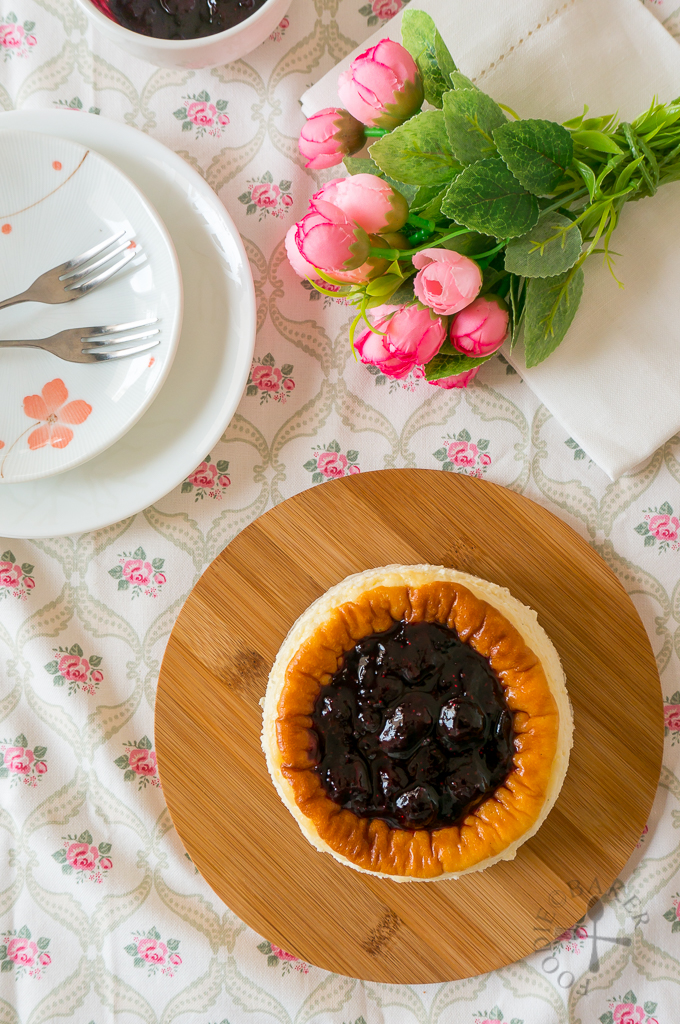 I baked this cheesecake sometime last year and posted the recipe only on Instagram. Since then, I've been wanting to rebake this for the blog and only managed to do so a few weeks back when I needed to clear my refrigerator for this 3-week holiday - I think I've never seen my refrigerator so empty before! 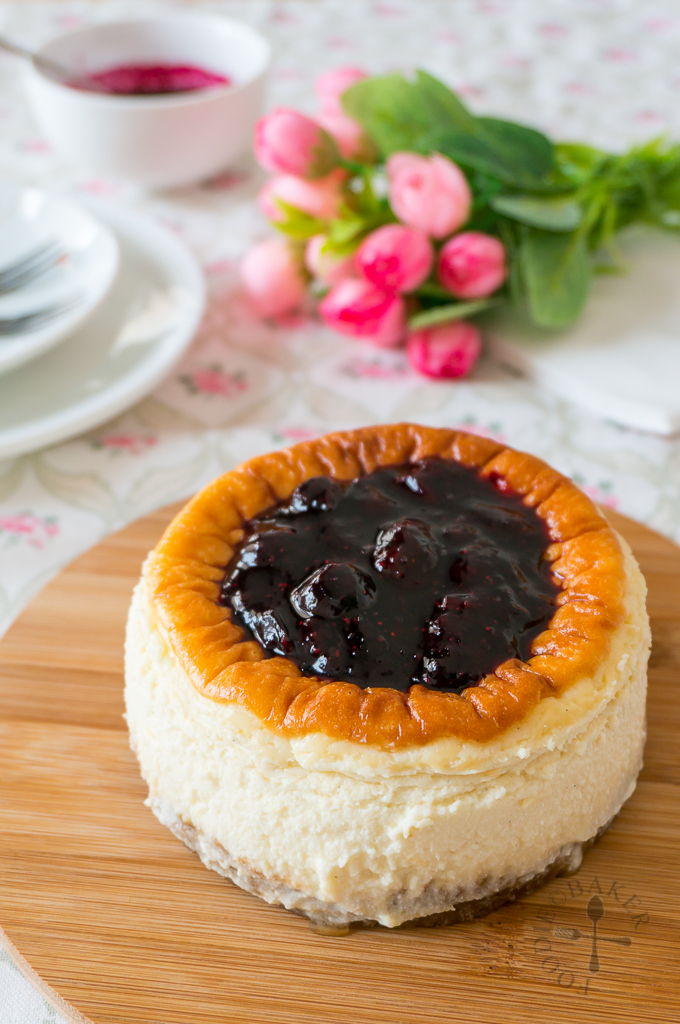 P.S. This is a scheduled post as I'm currently away on holiday! I've scheduled a few more while I'm away, so do subscribe to the mailing list, or follow my Facebook Page so that you will never miss a recipe or travelogue! Thank you for visiting and leaving behind sweet comments! My apologies as I won't be able to visit your blogs during this period. Do check out my Instagram (@foodiebaker) to see what I am up to in Iceland! 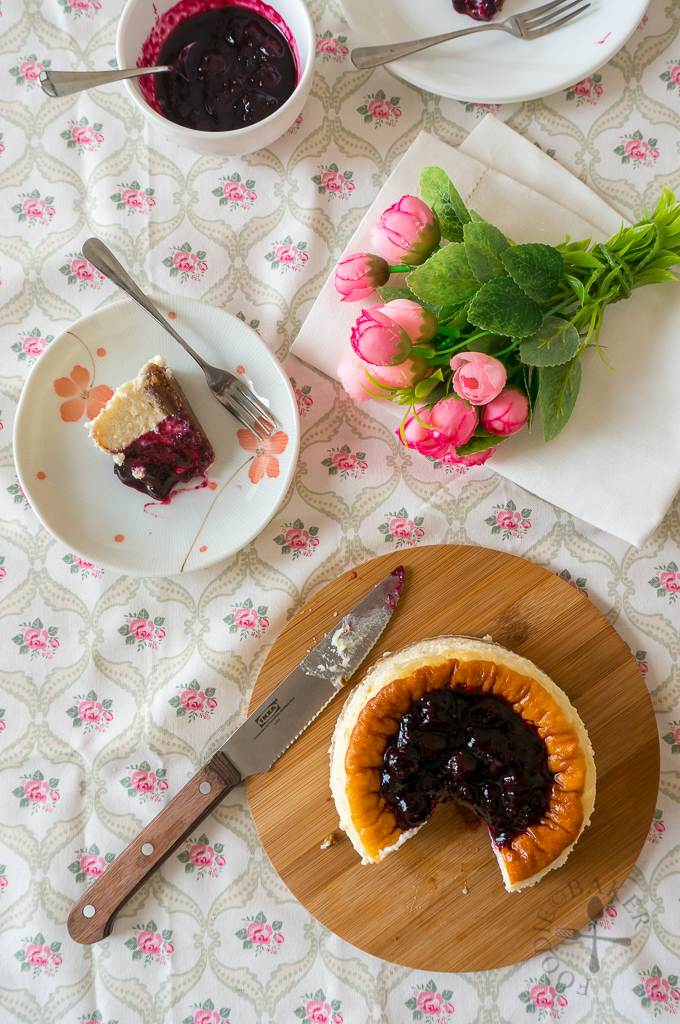 In terms of looks, I think I prefer the second cheesecake - some will say it's sacrilegious for cheesecake to brown but I guess it's really personal preference. I'm not sure if the browning is a result of the lack of water bath, but I guess that's something I have to experiment when I'm back! Both cheesecakes did not crack and even if they did crack, the blueberry compote will cover it up easily.

In terms of taste, I found the cheesecake a tad too soft for me but my friends were okay with it. I think I would still use the block cream cheese if I have the chance to get it. Block cream cheese, being imported from overseas, are more expensive than those tub ones that are produced locally. I only get them when they are on sale - hopefully they are on sale again soon! 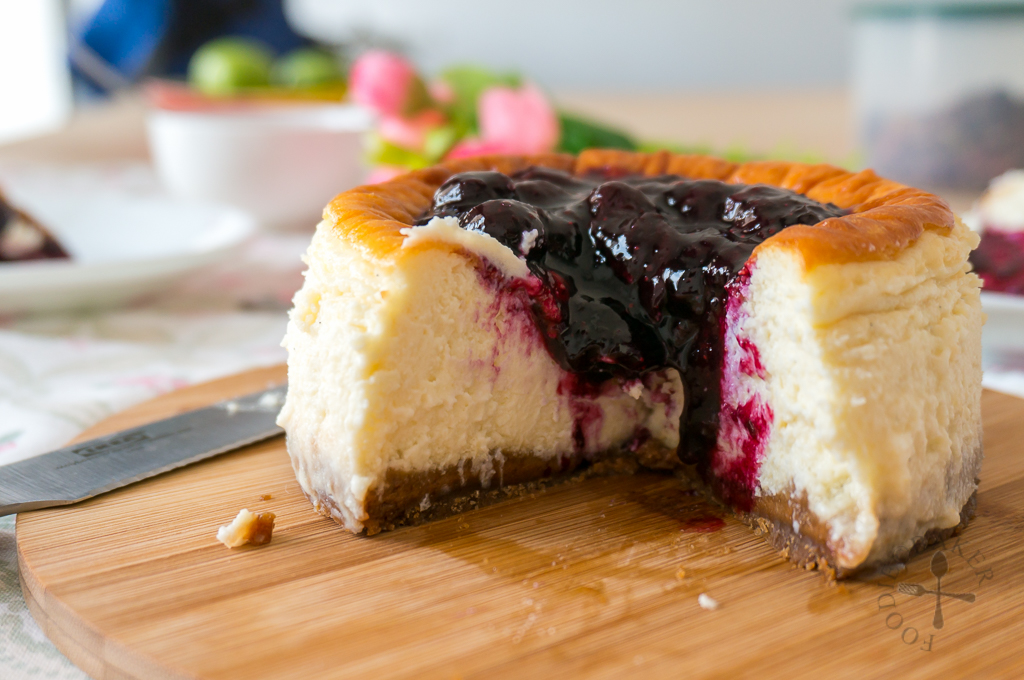 If you don't like blueberries, you can always swap them out with strawberries, raspberries, blackberries... you can even do a mix of them! Blueberries here are insanely pricey - SGD 10 for 125 grams! So when I saw some on sale in Denmark at only SGD 7 for 500 grams, I bought a packet and freeze them when I reached back. Now I can make blueberry cakes, muffins, cheesecakes anytime I want!

Okay enough blabber, here's how to make the cheesecake! During my first attempt, I baked the cheesecake in a water bath – the top is smooth and not browned at all. The second time I baked it, I skipped the water bath – the cheesecake rose and browned during baking then sank while cooling, creating a nice cavity to hold the blueberry compote.
By Jasline N.
Prep Time25 mins
Cook Time1 hr 5 mins
Total Time1 hr 30 mins

- To make ½ the recipe, use a 5-inch round cake tin.
- Beat the cheesecake batter on low speed so that you don't incorporate too much air into the batter.
Tried this recipe?Mention @foodiebaker or tag #foodiebaker!