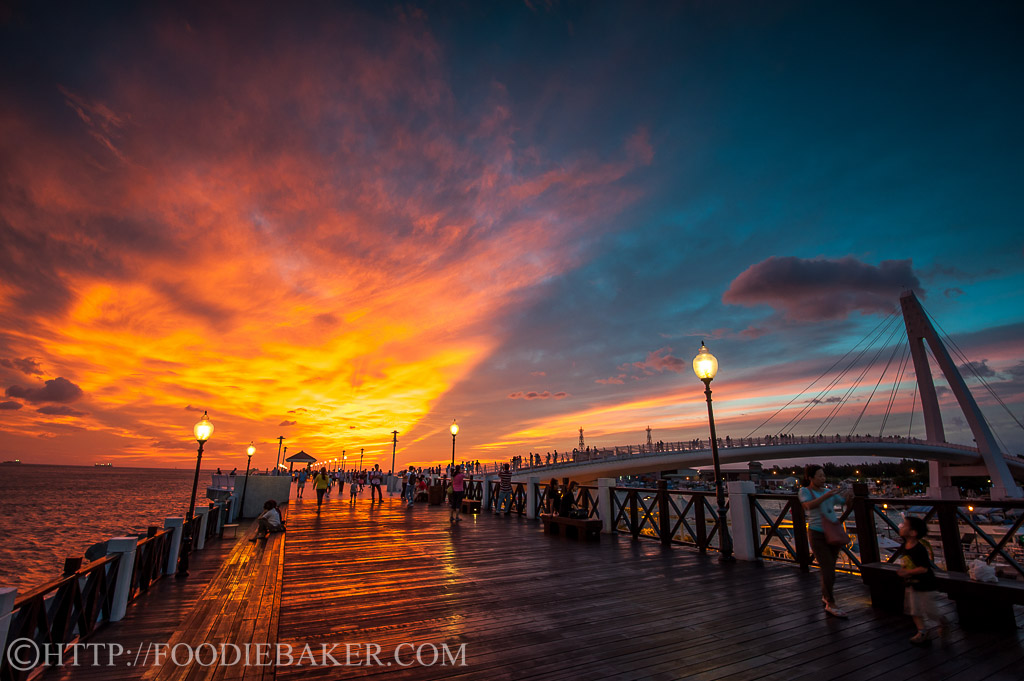 Tamsui is a district located to the North of Taipei. Many tourists (both local and foreign) love to go to Tamsui to walk around and enjoy the view, especially the sunset. We didn't manage to see the sun disappear set into the sea as it was a very cloudy day - the sun was hidden behind the clouds. We were actually a little disappointed as we wouldn't be able to see the sunset. However, it turned out to be a blessing in disguise! The sky turned into a beautiful combination of blue, red, yellow, pink and purple - it was amazing! 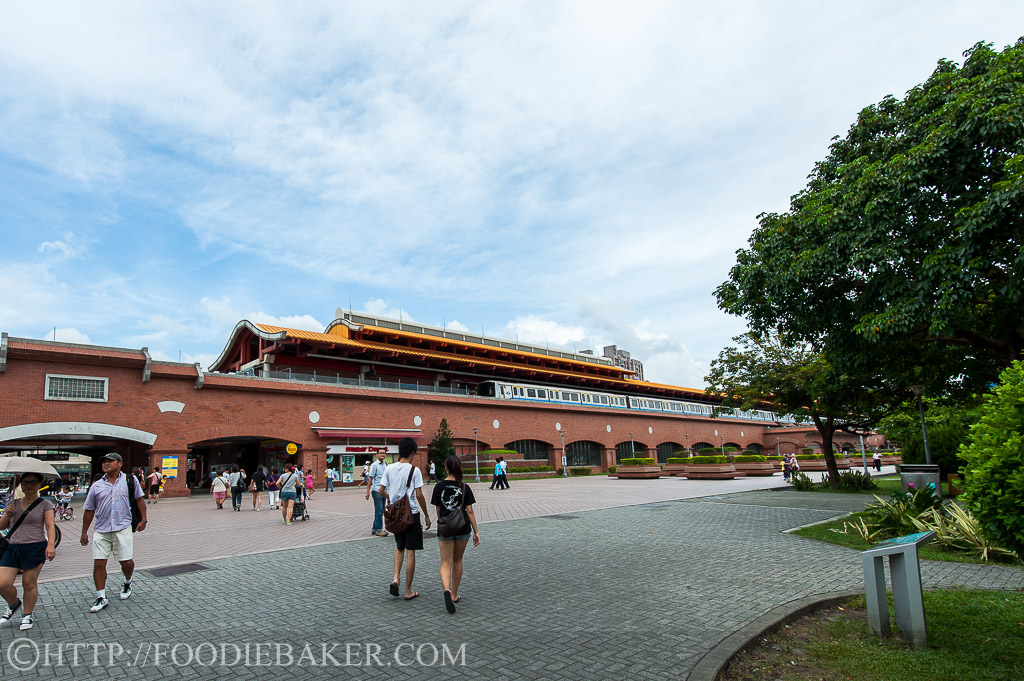 Tamsui, also known as Danshui or Danshuei (official name now is Tamsui). It was the largest port in Taiwan in the 19th century. It is easily accessible via the MRT, only about 40 minutes train ride from Taipei Main Station. 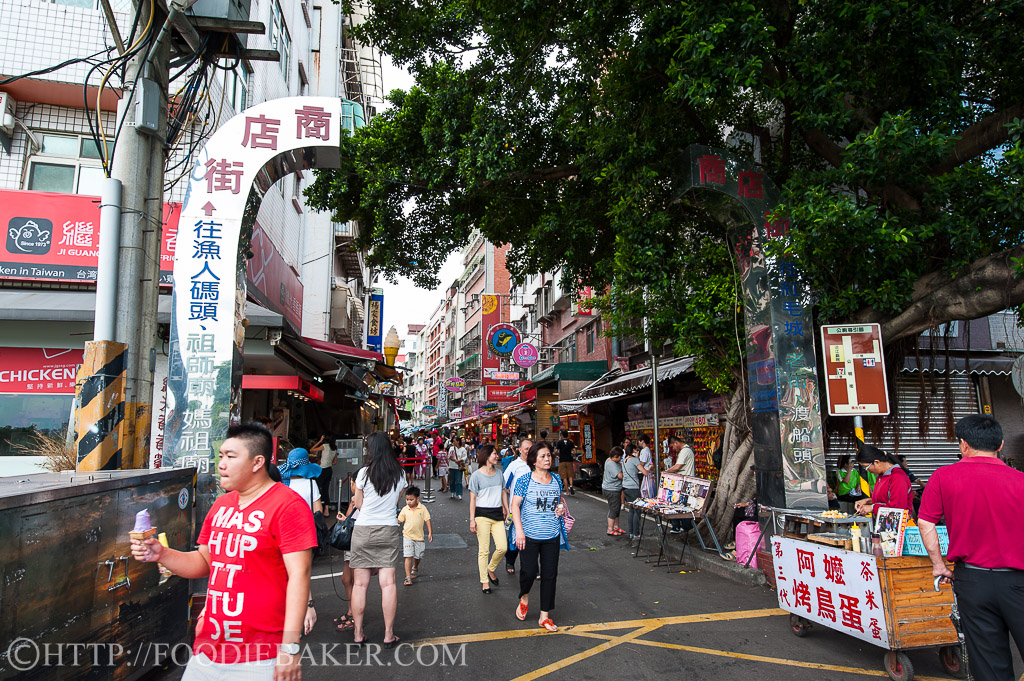 After walking for a short distance from the MRT station, we reached Tamsui Old Street, a pedestrian shopping area. There are many food vendors and souvenir shops along the street. A popular Tamsui specialty is A-Gei, which is glass noodles stuffed in fried bean curd, then served with a mild hot sauce. It's a pity that we were really stuffed that day and didn't manage to try it. But apparently I've read that one must wake up really early in order to eat it as the best (and most popular) a-gei gets sold out really fast. 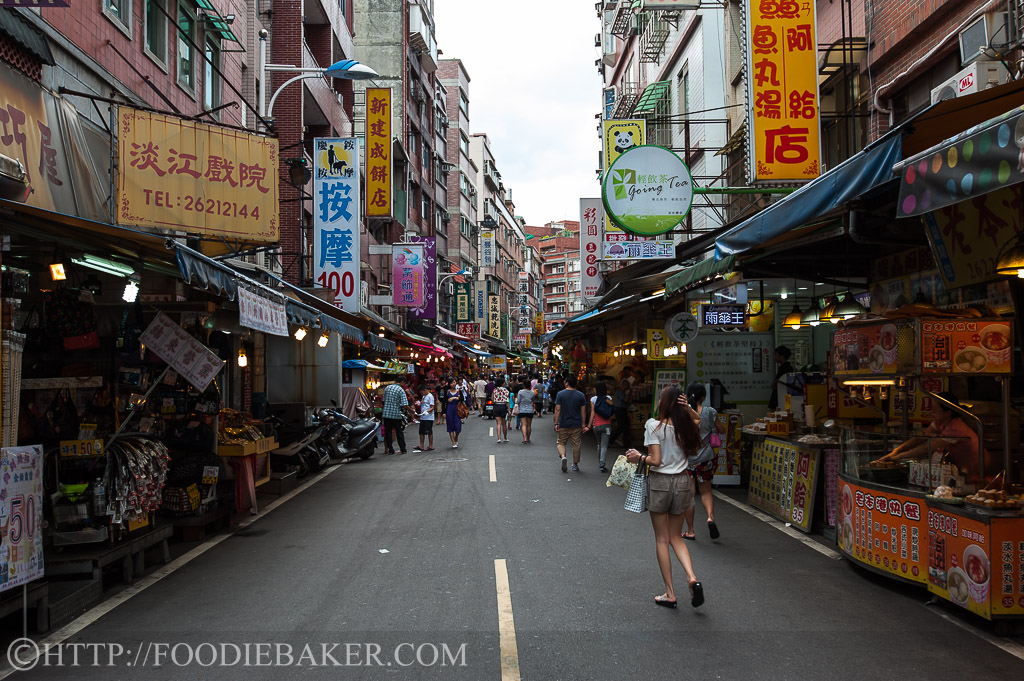 Another popular snack and souvenir that many tourists will buy back is tie dan (which literally translates to iron eggs). These are actually pickled eggs which are stewed in a mix of herbs and spices. They are packed in vacuumed bags and are sold almost everywhere. We weren't very fond of the eggs so we didn't buy them back. 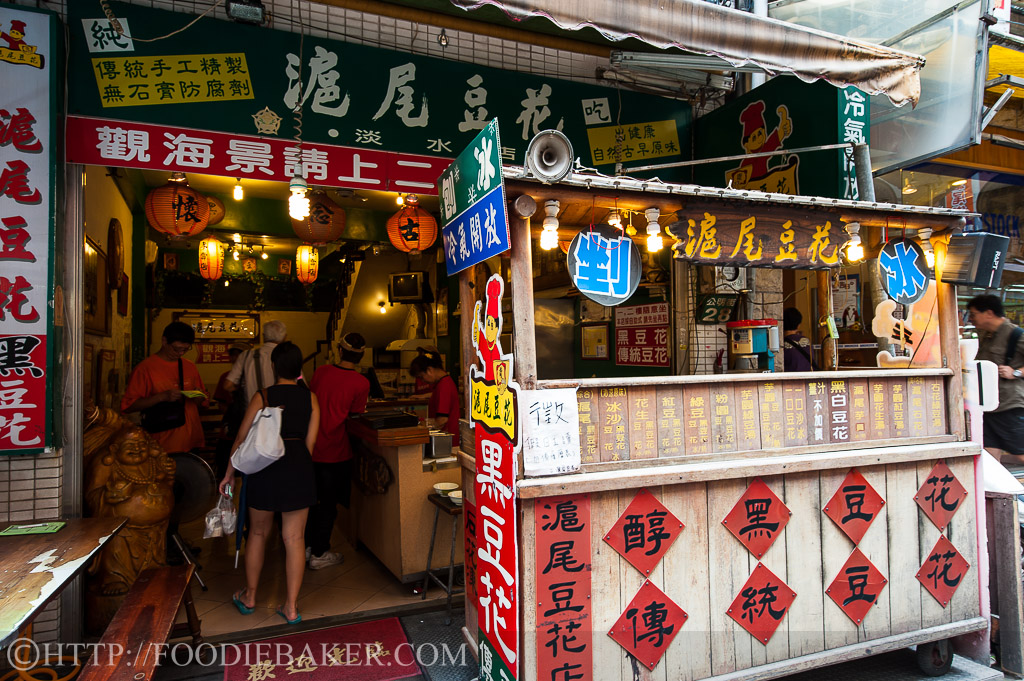 Dou Hua is a Chinese dessert made using soybeans into a soybean pudding. We weren't in the mood for a meal, but we certainly had room for desserts, so we went in to grab a bowl each. There was a sign below the stall name stating that we can see the sea view on the second floor, however, it's actually pretty pathetic, so we ended up sitting on the side facing the street, which is pretty fun as we can people-watch. There were traditional dou hua, black dou hua (made using black soybeans), traditional shaved ice etc. There are also many toppings to choose from, like cooked peanuts, adzuki beans, yam, tapioca and many more! 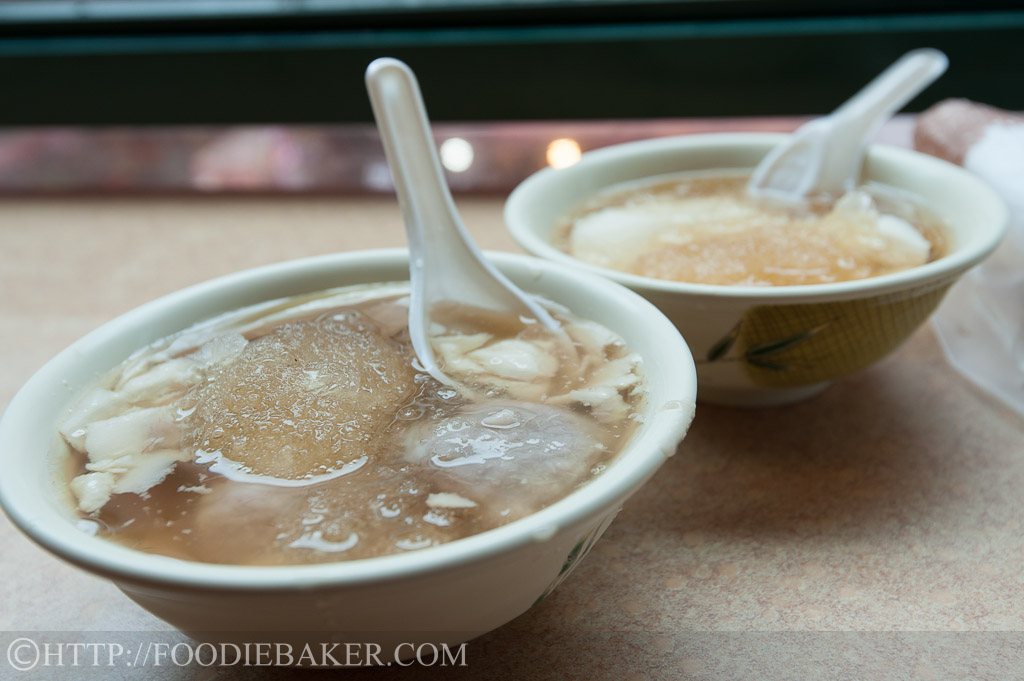 We chose two iced dou hua - one plain and one with yam. It was a very refreshing sweet treat. 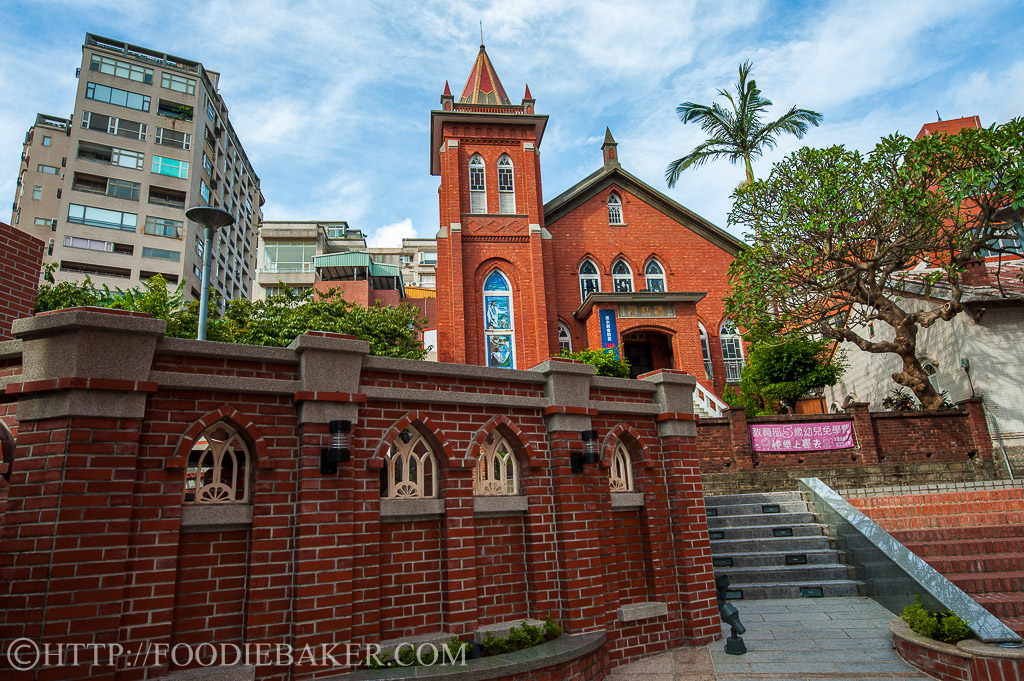 The church was established by Reverend Mackay, who arrived in Tamsui in 1872. It is a working church that still hold services. 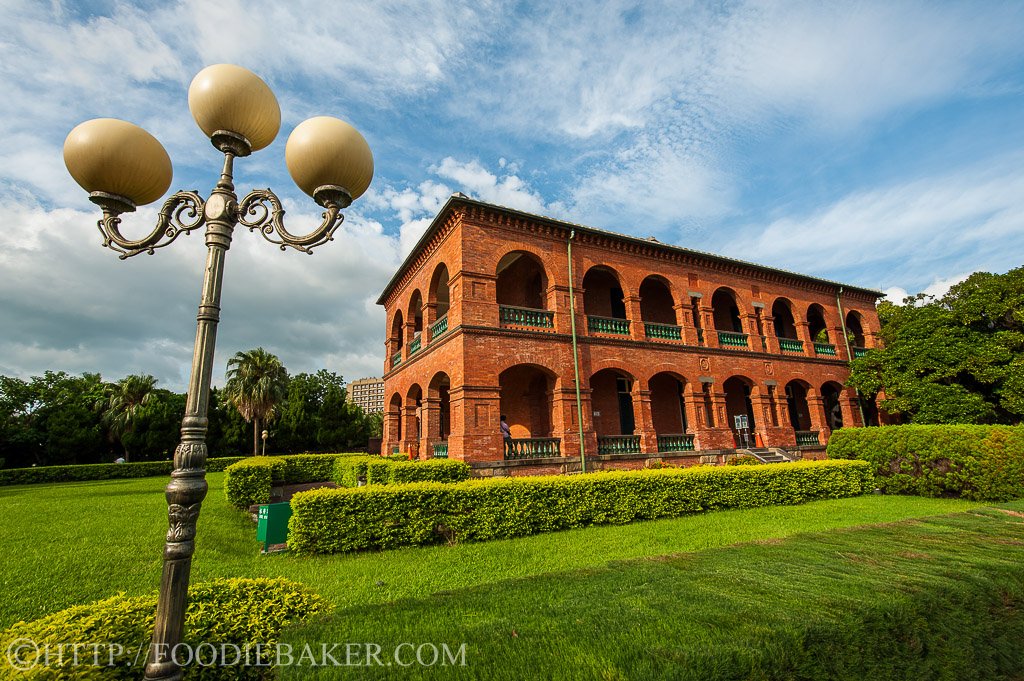 The fort was originally built in 1629 by the Spanish and was demolished by the locals in 1636. The Spanish rebuilt in 1637 but was destroyed again in 1642 when they were expelled by the Dutch. The fort was rebuilt again and the locals called it Hong Mao Cheng, which literally meant "Red Hair Castle", in reference to the red-haired Dutch. The fort was subsequently controlled by the Qing Dynasty Chinese government and then the British. It was painted red (previously white) and served as the British Consular Residence until World War II. After the government retrieved the land back, the renovated the place and reopen in in 2005 as a museum. It is now a very popular tourist spot in Tamsui. 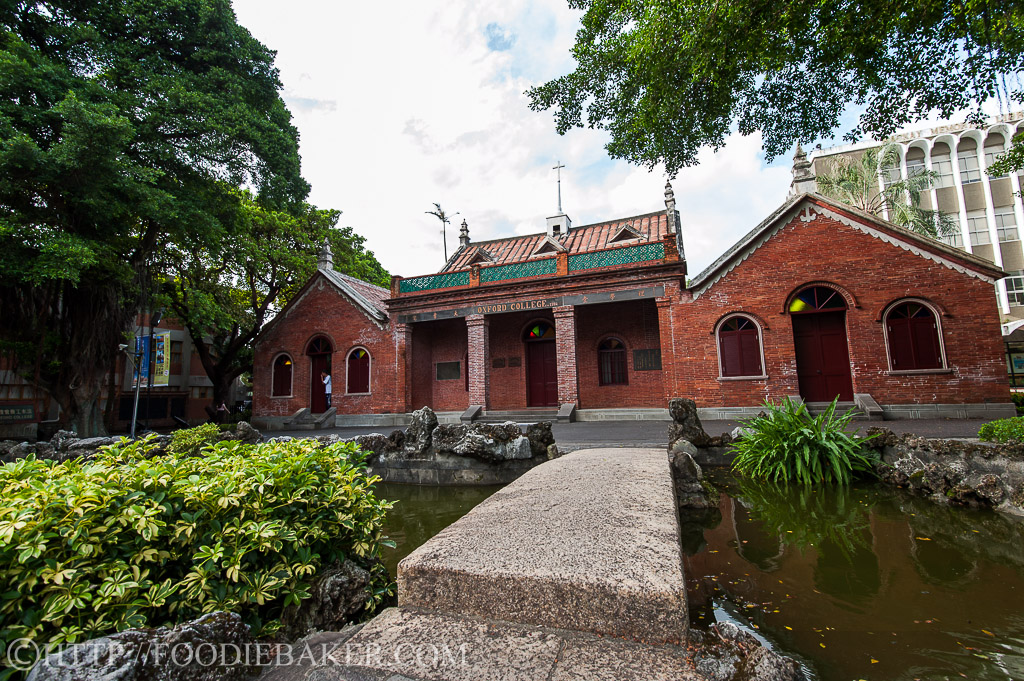 Nearby to the fort is a university. The university was founded by Reverend Mackay and completed in 1882. The above building was the former college and was named Oxford College as it was funded mainly by contributions from the residents of Oxford County in Ontario. The university has since expanded and consists of 8 colleges. 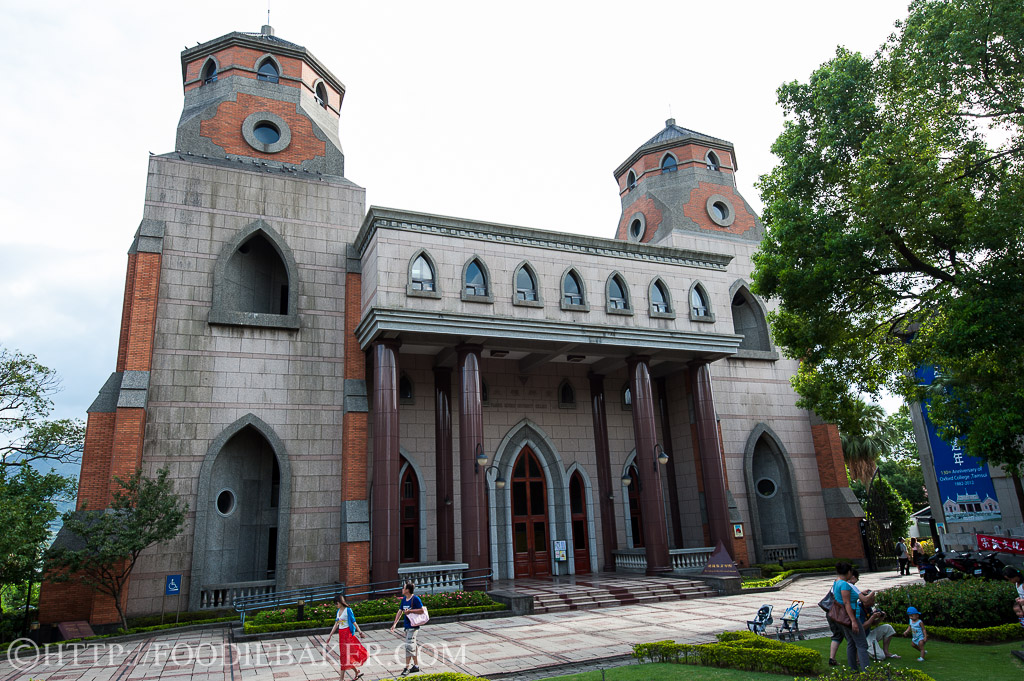 The Grand Chapel (大禮拜堂) of Aletheia University (真理大學), built in 1997. 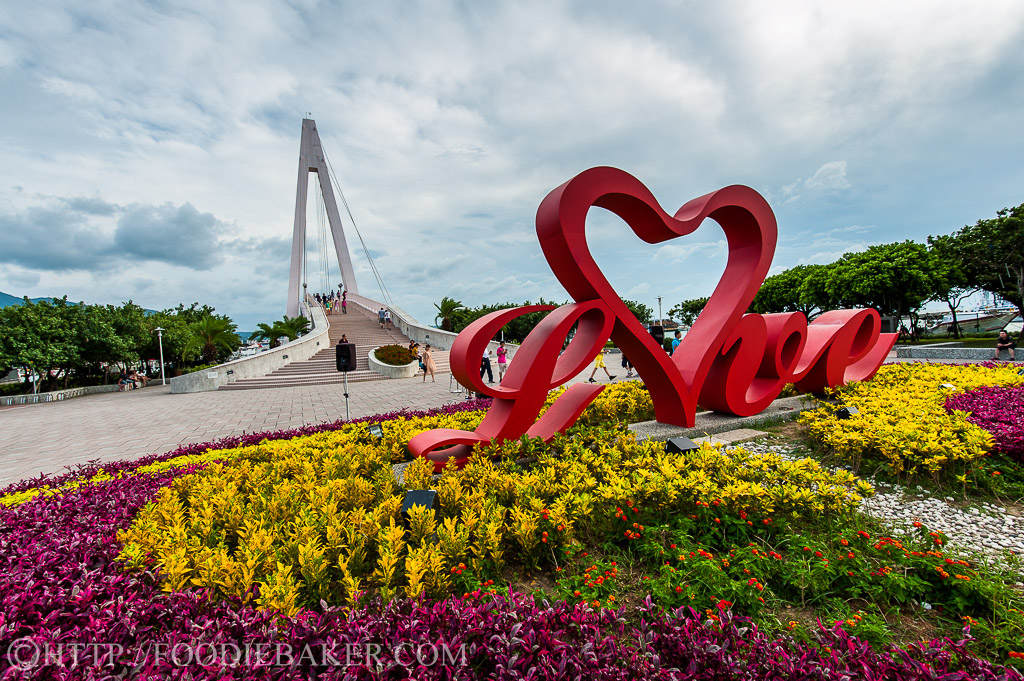 After visiting the university, we took a bus to Tamsui Fisherman's Wharf. The spot that all tourists love to take photo of is definitely at the Lover Bridge. At about 196 metres long, the NT$70 million slanted, cable bridge was unveiled on 14 Feb 2003, thus giving it its name Lover Bridge. It was a popular spot to watch the sunset. 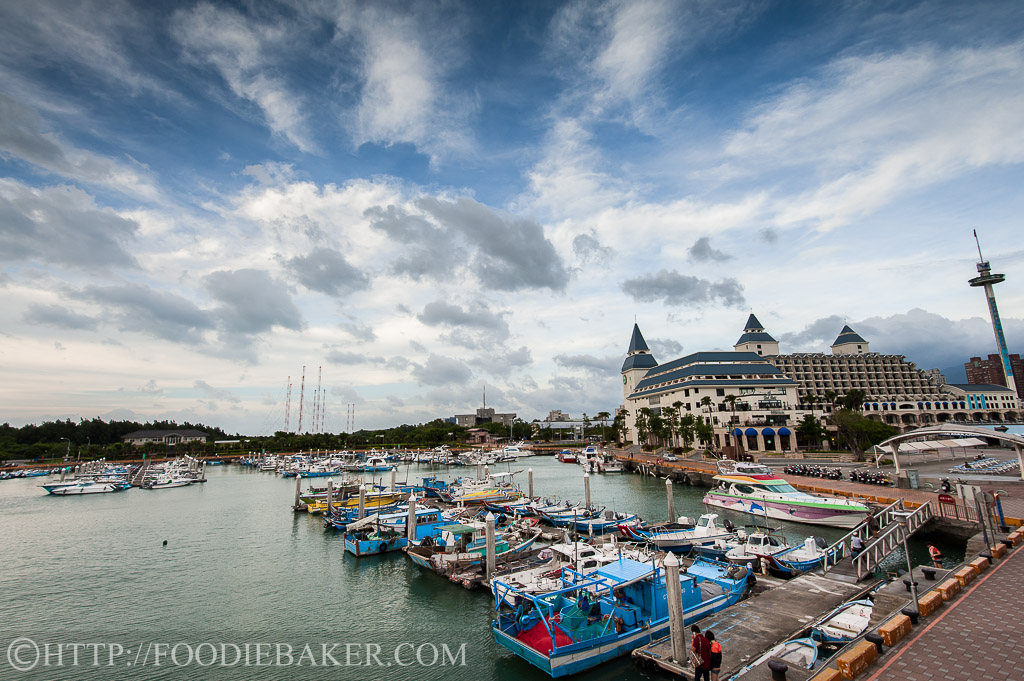 We went to Tamsui just a few days before we leave Taiwan, and Typhoon Tembin was looming, hence the cloudy skies and all the fishing boats are docked at the harbour. It was actually a very pretty sight. 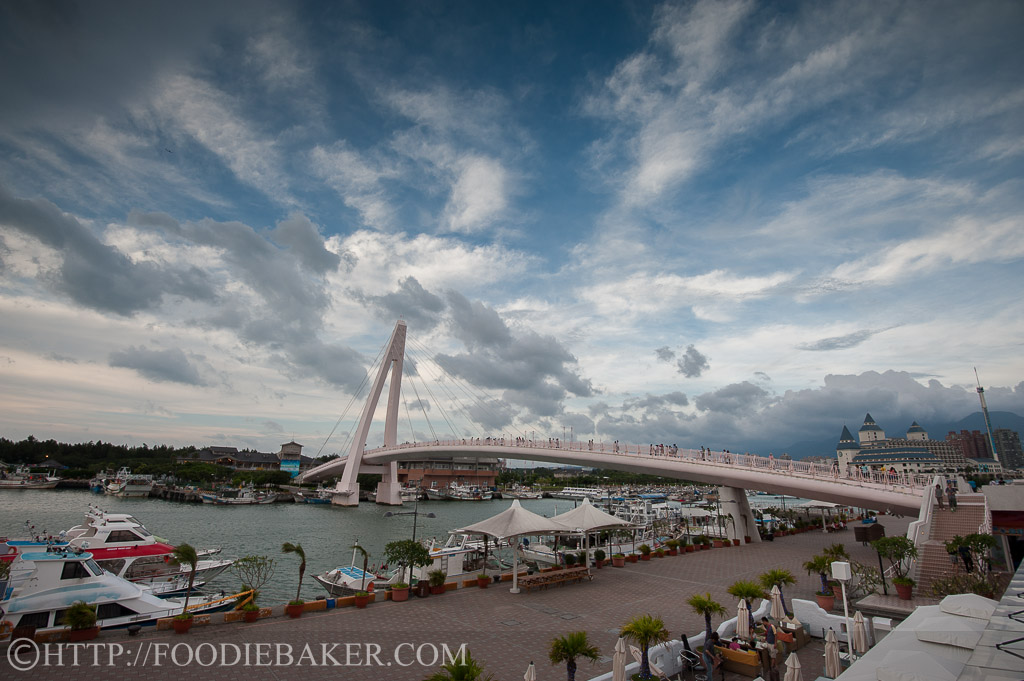 Waiting for the sunset on the opposite side of Lover Bridge 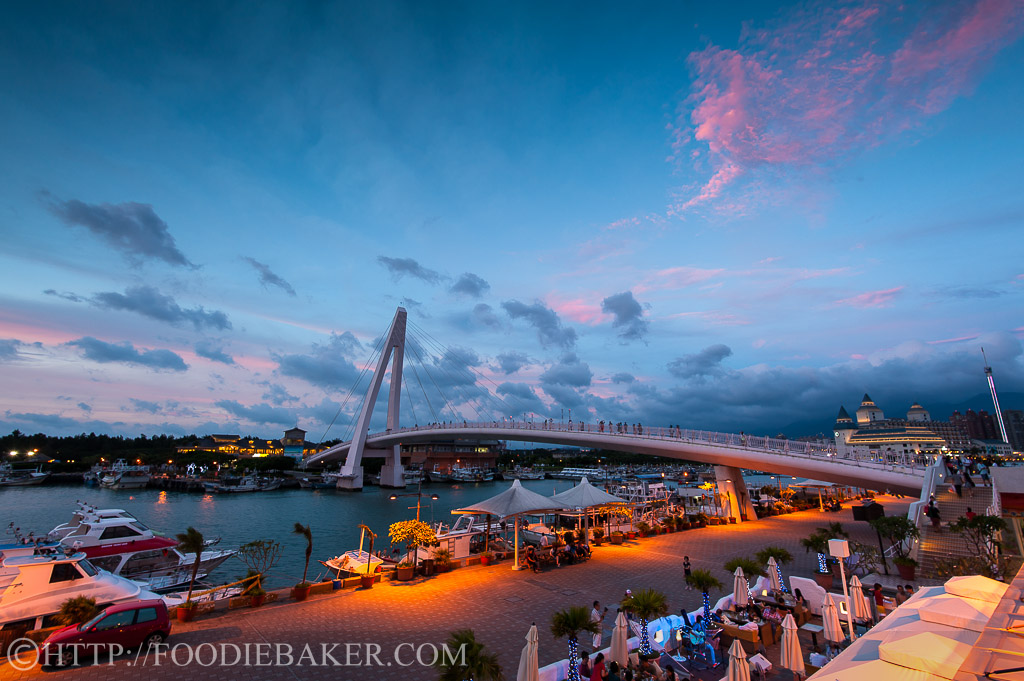 Sunset at Lover Bridge - no words is enough to describe the beauty. 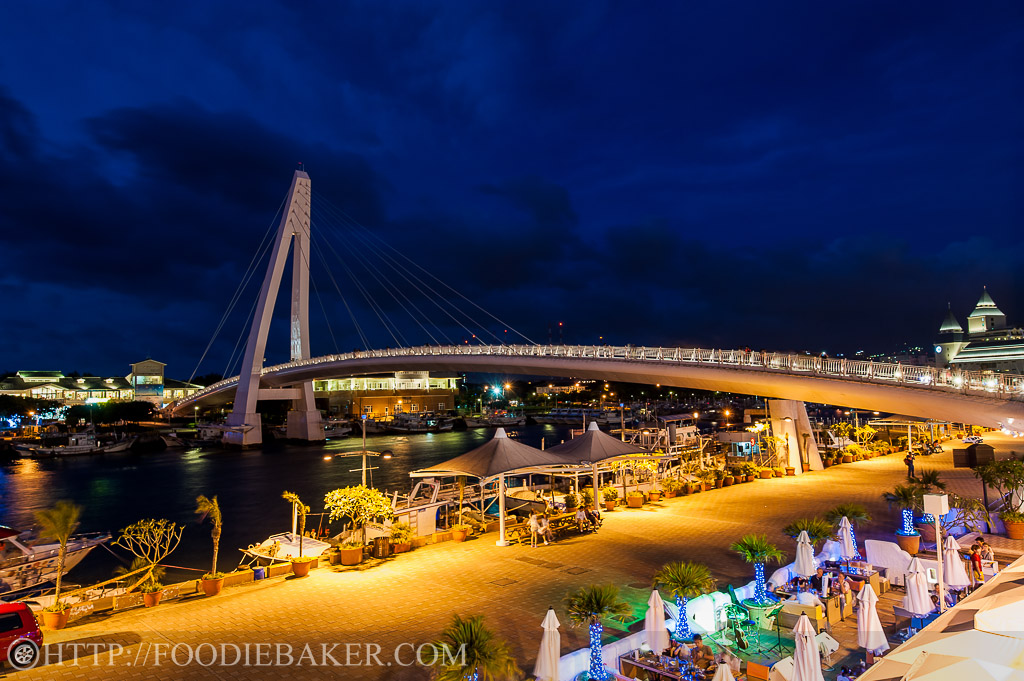 After the sun has set, it was the time for restaurants to get busy. There was also an outdoor live singer (for the restaurant), so we were enjoying the free music for a while before we decide to leave. 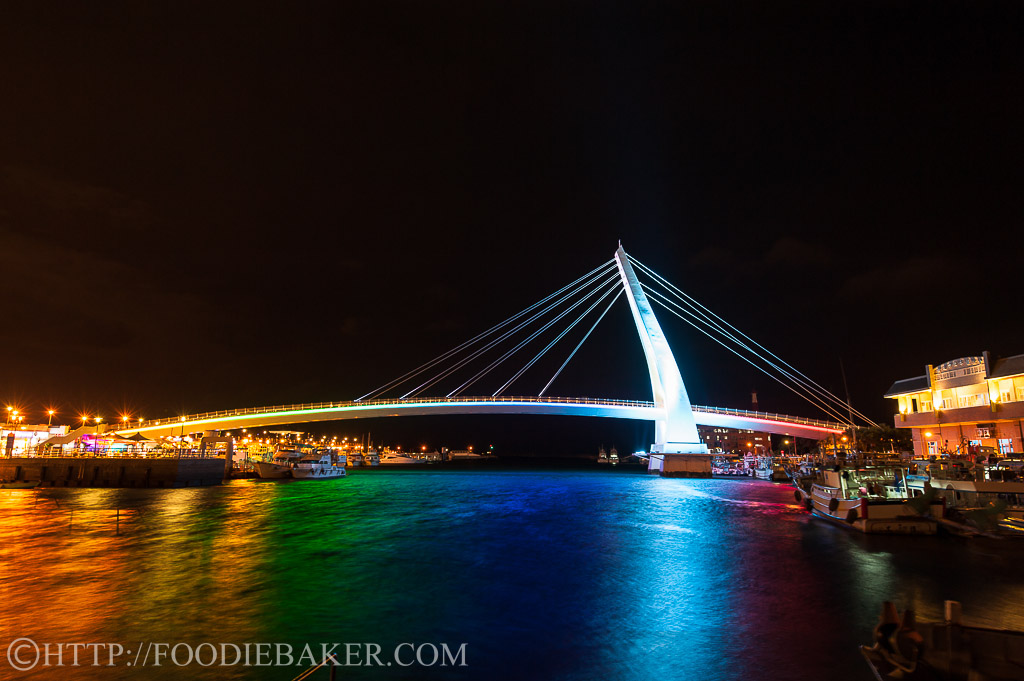 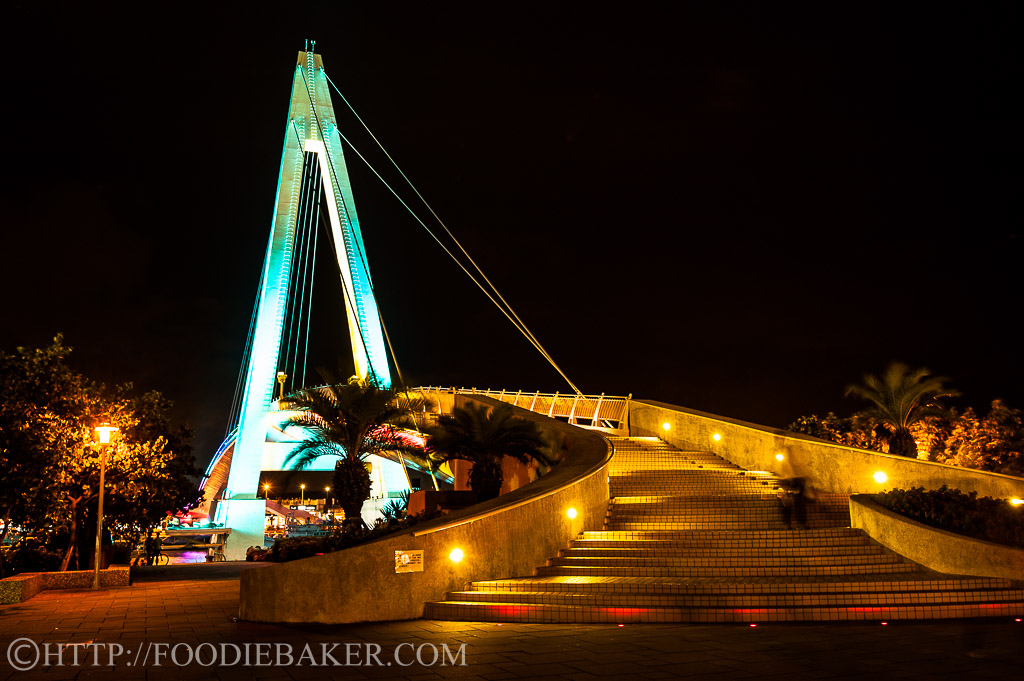 Tamsui is an extremely popular tourist spot, but I can understand why it is so popular (even with the locals) as it's a great place to get away from the city buzz. It is located not very far from the city center but provides plenty of serenity and calmness. If I'm staying in Taipei and want to get away from the city, Tamsui is definitely one of the top places that I'll go - I can just grab a cuppa, sit along the pier and just people-watch and enjoy the sea breeze. If only I'm staying there!