I made this pasta dish for the event Cook Like A Star - Cook Like A Star is a blog hop hosted by Zoe from Bake for Happy Kids, Baby Sumo from Eat your heart out and Riceball from Riceball Eats. The even is hosted every bi-monthly and the theme will always be a celebrity chef. All we have to do is just try out the dishes cooked/baked by these celebrity chefs and post it on our blogs!

This month's theme is Martha Stewart - I've never really watched her show though I know many love her recipes. While browsing for a quick and easy lunch idea on her website, I found this easy pasta dish that I whipped up in less than 30 minutes! The original recipe also uses breadcrumbs but I decided to omit them as I don't have bread in my house at that time. I also added a little chili (de-seeded so it's less spicy) for a little kick which complemented very well with the tangy lemon juice.

Overall I'm pretty fond of this recipe as it's really cheap dish to cook (canned tuna ain't expensive) and it's a nutritious dish as well (tuna is a great source of Omega-3s). Will definitely be making it more often. Start of with lots of garlic and some chili.

I love garlic, so I used 2 cloves per person. You can use more or less, depending on your personal preference. For the chili, I removed the seeds so that it's less spicy. If you have a higher tolerance for spicy stuff, by all means add in the whole chili with seeds. Fry the garlic and chili in some olive oil until the garlic turns a light golden brown. Add in the tuna chunks. Drain the pasta and toss it with the oil-garlic-chili-tuna mixture, lemon juice, cheese, salt black pepper and parsley.

I'm submitting this to Cook Like A Star hosted by Zoe from Bake for Happy Kids, Baby Sumo from Eat your heart out and Riceball from Riceball Eats. (See below for other foodie's submissions.) 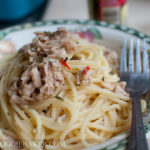