I've missed several Bake Alongs and I've decided not to miss any more this time! (Okay, partly also because I'm dying to bake some choux as I love cream puffs and éclairs very much, so this Bake Along came just in time to satisfy my choux cravings!)

In case you're wondering, Bake Along is an event hosted by Joyce from Kitchen Flavours, Lena from Frozen Wings and Zoe from Bake for Happy Kids. They will decide on a theme (can be a general theme like éclairs or a specific recipe from a cookbook) and we'll bake them and blog about it on the stipulated date. It's a great avenue to try out recipes that you've always wanted to try, but didn't have the motivation to do so! After my experience in baking cream puffs, baking éclairs is pretty straight forward to me now. I used the same recipe for my choux and pipe strips instead of mounds. As for the filling, I filled half of the éclairs with vanilla pastry cream and the rest with chocolate pastry cream. My friends are chocoholics, so they actually preferred the chocolate ones to the vanilla, while I personally like them both the same. Filled with chocolate pastry cream - for the chocoholics out there!

A side note from the éclairs - I received an award some time ago in October, but finally got around blogging about it now - I know, I know, I'm such a huge procrastinator... But it's never too late, right? 😉 And I think I might have missed out some of the awards that are being passed on to me, so do let me know, okay? Would love to give some credit to you guys!

And so, a huge thank you to Suzanne from A Pug In the Kitchen for nominating me this award! Suzanne is a lovely and sweet foodie who is currently blogging a lot of Christmas treats (I'm so in love with the Chocolate Rugelach and the Triple Threat Chocolate Squares!) She also has two really adorable dogs (wish I hope to see more photos of them on your blog, Suzanne!) Do hop over her blog to see what she whips up in her lovely kitchen!

As part of the rules, I'm supposed to name 15 blogs that inspired me in my blogging journey, and here they are!

Okay, this is more than 15, but all these blogs are definitely worth visiting (there are so many other blogs I want to list!) Do hope over to their blog and say hi! For those nominated, it's not compulsory to pass it on, I just want to let you guys know that I'm a huge supporter of your blogs and am always inspired by you guys! 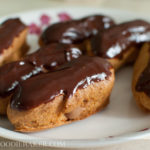 Makes about 20 éclairs
By Jasline N.