Choux à la Crème is the French name for a well-known dessert - cream puffs! Almost everyone I know love cream puffs - it's always the first dessert to be emptied from trays during dessert buffets!

So, what is choux?

Choux pastry, aka pâte à choux, is a light pastry dough made with only four ingredients: liquid (milk or water), fat (butter), flour and eggs. It's interesting that without any raising agent, it is able to puff up very well with a hollow interior. The rise is caused by the high moisture content (liquid and the eggs) in the choux pastry which creates steam during baking, pushing the pastry upwards and creating a hollow centre at the same time. It was said that choux pastry was invented in 1540 by Popelini, Catherine de' Medici's chef (Catherine de' Medici is the Queen consort of France from 1547 to 1559), and gradually became more popular in the 17th century. It is called pâte à choux because it looks like a cabbage - and choux is cabbage in French! Choux pastry is mostly baked, but there are fried versions as well. It is often filled with sweet fillings and sometimes savoury fillings.

Choux à la Crème, cream puffs, profiteroles - they are all names used to describe a small choux pastry ball that is filled with whipped cream, pastry cream, custard or ice cream. It can be served plain or with generous spoonfuls of chocolate ganache or caramel sauce spooned on top. (I am sooooo making myself hungry here!) I finally had a chance to bake cream puffs (I've been procrastinating a very long time!), thanks to these ladies: Joyce from Kitchen Flavours, Lena from Frozen Wings and Zoe from Bake for Happy Kids for deciding on cream puffs as the theme for this Bake Along. I'm sure many foodies out there are very excited as well to be baking cream puffs! Cream puffs are surprisingly pretty easy to bake yet they can easily impress almost everyone out there! 😉 There are no magic involved in baking a good, puffy cream puff, but it's essential to know some basic rules (they are more elaborated at the recipe below!) on making choux so that it'll be a smooth journey while baking them. But before I go into the step-by-step photos and the detailed notes, here's a look of the interior of the cream puff - filled with lusciously rich pastry cream. I went to heaven the moment I bit into it, and then I couldn't resist and ate 3 more puffs after that, it's that addictive! Combine butter, sugar and milk in a pot and bring it to a rolling boil. Add in all the flour and mix, mix, mix!

(Sorry, it all happened too fast that I forgot to take photos of the process!) Mix until you form a ball of dough and that there's a thin layer of dough stuck to the bottom of the pot - that's the sign that the dough is ready! Beat in the eggs, little by little to get a smooth choux. A smooth and thick choux ready to be piped! Transfer the choux into a piping bag. Pipe small mounds of choux onto a baking sheet. Dampen your finger and slightly flatten the choux so that the tip won't burn during baking. Bake until they are well-puffed and the interior's dry! I'm submitting this to Bake-Along hosted by Joyce from Kitchen Flavours, Lena from Frozen Wings and Zoe from Bake for Happy Kids. Do click the picture below to see other foodies' bake on cream puffs! 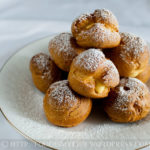