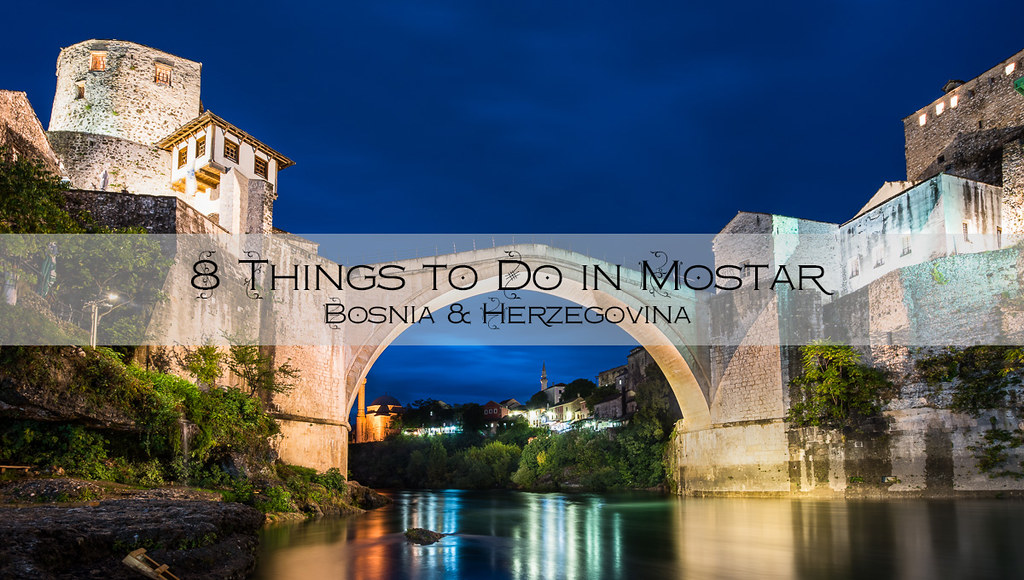 Mostar, the fifth largest city in Bosnia and Herzegovina, was named after the mostari (bridge keepers) who guarded the Stari Most (Old Bridge), that was first built by the Ottomans in the 16th century. Mostar, like Sarajevo, also suffered under the Bosnian War that took place from 1992 to 1995. The Croats and Bosniaks in Mostar fought in an alliance to expel the Serbs. However, by the end of 1992, tensions between the Croats and Bosniaks grew and it eventually led to a war within a war - the Croat-Bosniak War - which only ended in 1994.

Even 20 years after the war, Mostar has not recovered fully from the effects of war. As we walked through Mostar, we saw many abandoned buildings (some side-by-side new ones, creating a stark contrast) and walls riddled with bullet holes.

Nevertheless, Mostar's unique architecture, including the bridge, Stari Most, which can be considered Bosnia and Herzegovina's most popular landmark, scenic views and possible day trips to incredibly beautiful places are what draw so many tourists to the city yearly.

Getting to Mostar From Sarajevo

There are 2 ways to get to Mostar from Sarajevo - bus or train.

Both the bus and train stations are located side-by-side at the end of Tram Line 1 (the tram line can be taken from the old town) at BAM1.60 per person (one-way). Don't worry if you cannot find the station - the locals are more than willing to help out.

We originally wanted to take the train (which was supposed to be a very scenic ride) but unfortunately the railway was undergoing maintenance so there was no train available (as of October 2016). The website where you can search train timings is here, but I think the website has just undergone a revamp, so the train timings function is not working as well yet.

We bought our bus tickets a day in advance at the bus station at BAM17.50 per person (one-way) - you can also buy the tickets on the day itself but note that there will usually be a queue, so if you are late or rushing for time... Buses depart on a regular basis and all the timings are printed on a big board at the bus station or can be found online here. On the day of departure, we showed our tickets to the staff at the gantry and they let us in to a waiting area. We paid BAM2 (or €1) for every piece of luggage stored underneath the bus, and were given a slip (like a receipt whereby the other end is tied to our luggage). It took us about 3 hours to reach Mostar and the ride was pretty comfortable.

Now that I've covered how to get to Mostar, here are the things that you can do/see in Mostar! 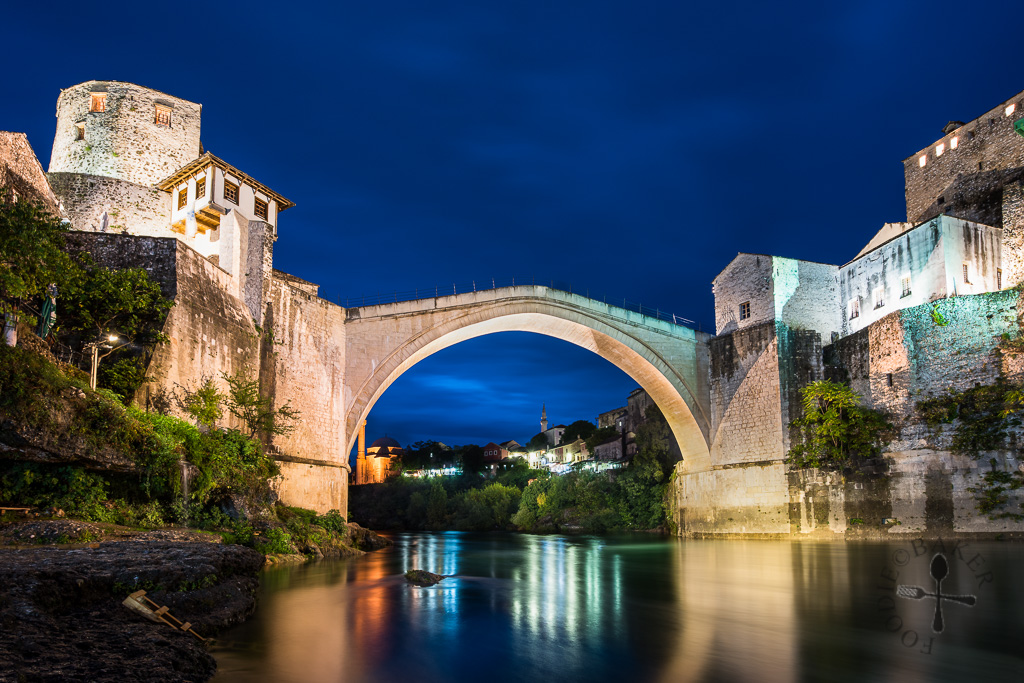 The Stari Most (Old Bridge) was built in 1566 during the Ottoman Empire and was one of Mostar's most important icons - with poems and songs written about it, and painted by numerous artists from Bosnia and Herzegovina and abroad. During the war in 1993, the bridge was completely destroyed by shelling and collapsed into the river, Neretva. Reconstruction for the bridge started in September 1997 and was formerly opened in July 2004.

Since the Ottoman period, a sport of high-diving into Neretva was started, and continued till today even after more than 450 years. Divers from Mostari diving club will collect money from travellers and when sufficient funds are collected, they will jump off the Start Most and plunge 24 metres down into Neretva, reaching a speed of 80km/h in just 3 seconds. We saw it once from afar but wasn't quick enough to take any photos. If you are interested in attempting this feat, you will have to pay 50 euros to the club, which will include some training before you jump off. 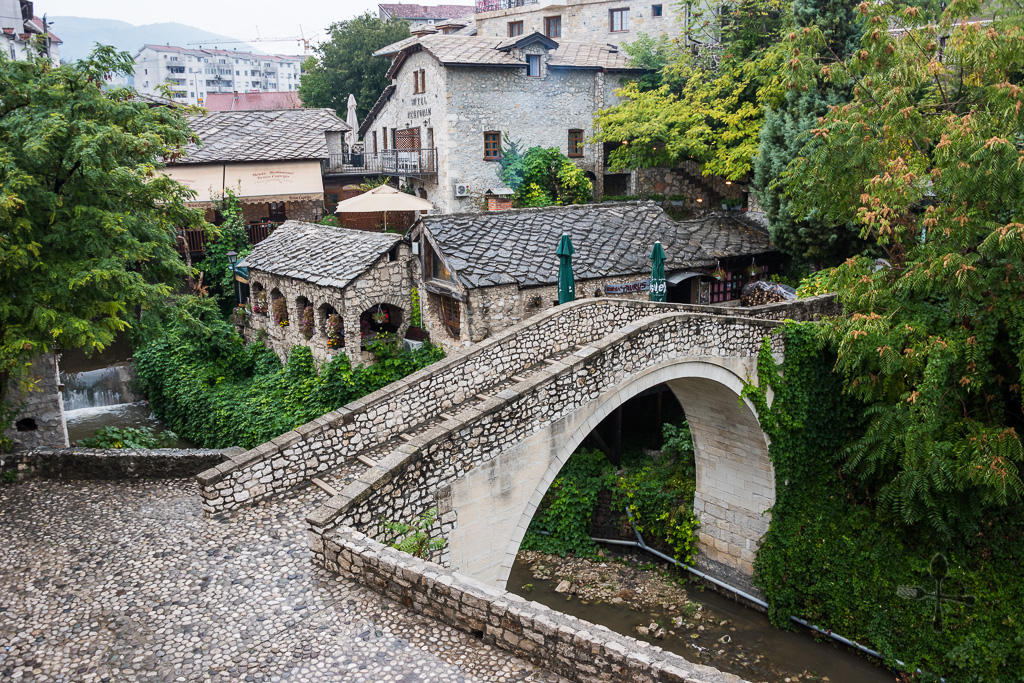 While wandering through Mostar (in the rain unfortunately), we saw this stone bridge with a restaurant made of stones next to it. While the bridge may not be as grand as the Stari Most, the lack of people in this area made up for it - also perfect for taking photos! 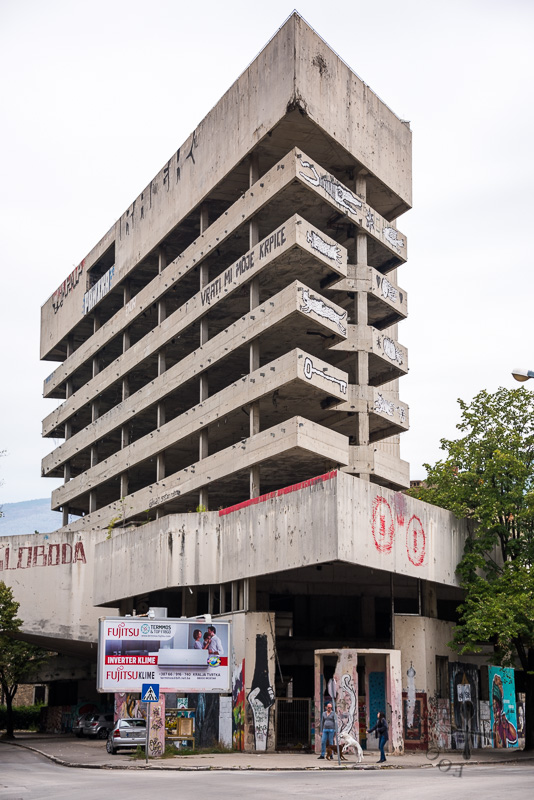 Of all the abandoned buildings in Mostar, this 7-storey building on the West bank of Mostar is perhaps the most noticeable and significant. Originally a bank building owned by Ljubljanska Banka, it was taken over by Serbs and Croats during the Bosnian War. They used the building as a vantage point to snipe at Bosniaks, giving this building an infamous and disturbing name - Sniper Tower.

Today, the Sniper Tower stood abandoned, in ruins and vandalised with graffiti. A metal gate blocked off the former entrance, but that did not stop thrill seekers from finding ways to sneak in. We did not enter the building, but only walked around the building to look at the graffiti. 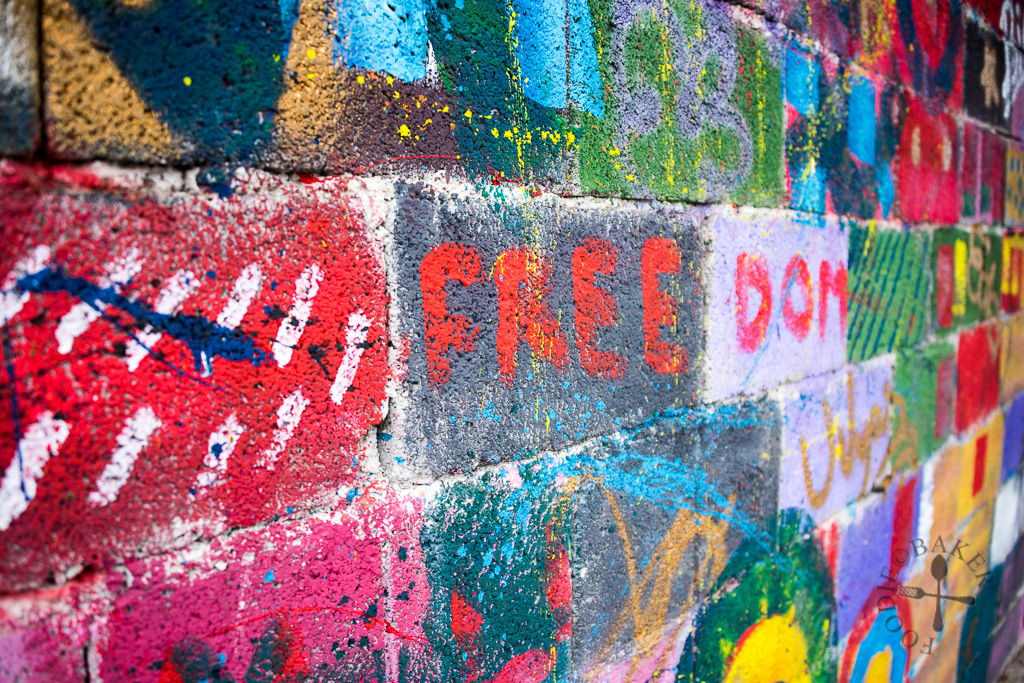 3) Stroll Through the Old City

Mostar was developed by the Ottomans in the 15th and 16th centuries and the Austrian-Hungarians in the 19th and 20th centuries. The Old City, located on the East bank of the river, was primarily developed by the Ottomans. As such, the stone houses create a unique view, best viewed from the Stari Most. It can be quite nice to walk through the old town, and take a break in one of the many restaurants or cafés. 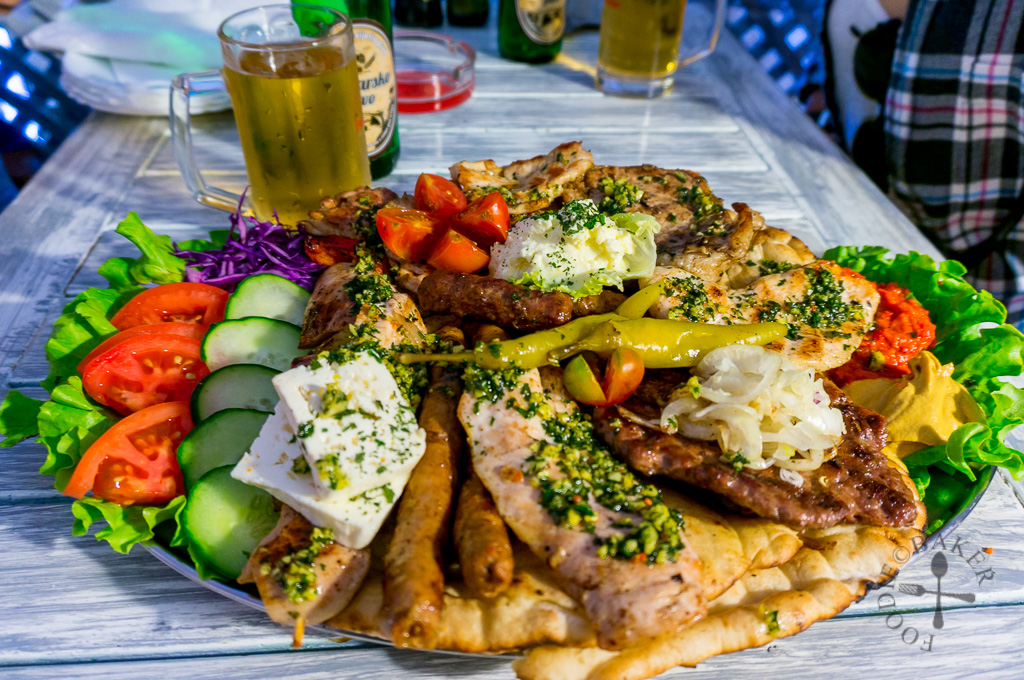 Our best meal in Mostar was at Tima-Irma, a small family restaurant that has been around for more than 30 years. There is not much seating in the restaurant - so go early, go late or be prepared to wait. We went for a late lunch so we didn't have to wait. Go for everything grilled - we had the grilled platter for 2 to share among the 4 of us and everything was delicious. Oh, and don't forget to order a Mostar beer to go with the food!

5) See the Whole of Mostar from Koski Mehmed Paša Mosque

Koski Mehmed Paša Mosque is perhaps the best place to be for a panoramic view of Mostar. However, it is a pricey view because we paid BAM 16 per person to climb up the steep and narrow minaret (BAM6 for the mosque and courtyard and BAM10 for the minaret - you can pay in euros too, €8 total). Unless the weather is clear and good, don't go up the minaret as it would be a waste of money.

Koski Mehmed Paša Mosque was built in 1618 and is the second biggest mosque (but still quite small, compared to those we had seen in Turkey) in Mostar. Like Stari Most, the mosque was also destroyed during the Bosnian War but rebuilt and reopened in 2001. 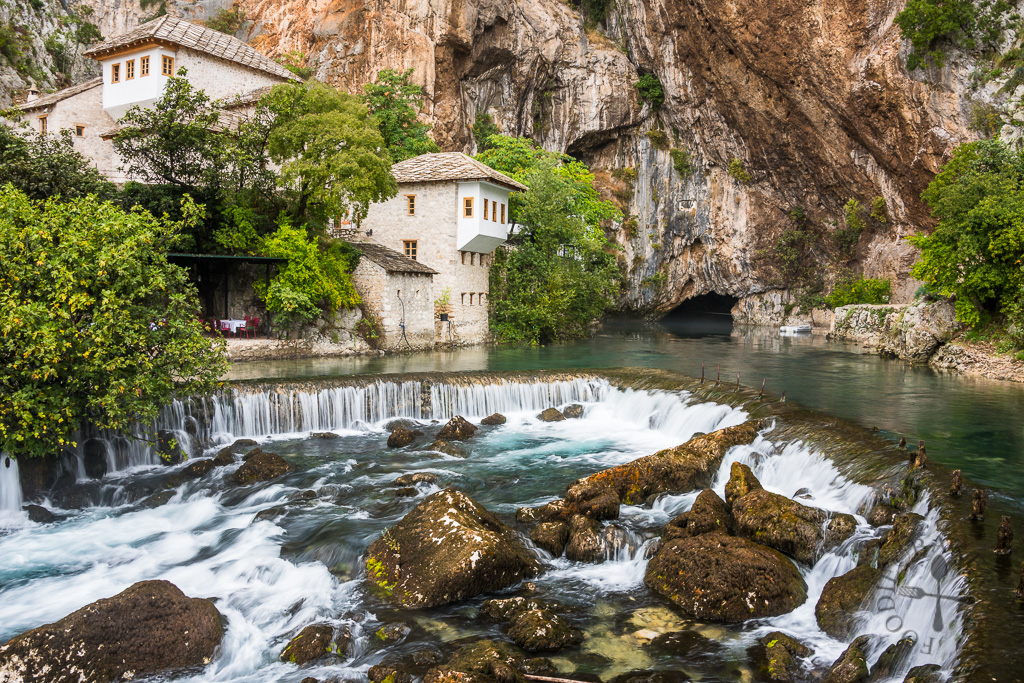 On our second day in Mostar, we took a day trip out to Blagaj, Počitelj and Kravica Waterfall (more details at the end of the post).

Blagaj is a small town located about 13 kilometres south-eastern of Mostar (20 to 25-minute drive). At Blagaj, one thing not to be missed is the source of the short Buna river - a spring that emerges from a karstic cavern beneath a 200-metre high and almost vertical cliff, the Vrelo Bune.

Right next to the Vrelo Bune is Blagaj Tekke, a Sufi monastery that was established around 1520 by dervishes, who performed a special ritual there called Zikr. In 1851, the Blagaj Tekke underwent a renovation to include a turbe (tomb) and misafirhana (guesthouses), built close to the cliff to look like it was carved out from the cliff face. Today, the Blagaj Tekke is now a tourist facility, with a museum, restaurant and souvenir shop. (Entry to the Balgaj Tekke costs €2 per person.)

Počitelj is a small town located about 30 kilometres South of Mostar. Built in a natural karst amphitheatre in the Neretva river valley, it is not known who erected it and when. In the 1460s, Počitelj was controlled by the Hungarians. When the Ottomans conquered Bosnia in 1463, Počitelj became a strategic and important stronghold and the Hungarians had the fortifications strengthened - town walls were expanded and towers were enlarged. However, the town still fell into the hands of the Ottomans in the end in 1471.

The Ottomans did not regard Počitelj as a stronghold, hence the town was transformed into an oriental settlement, with public buildings, such as mosques, hamams and schools, being erected. It was only in 1693, after the Venetian conquest of Gabela, that Počitelj assumed again its strategic importance and fortifications were reinforced.

Eventually, the Ottomans were defeated and once again, Počitelj lost its importance as a stronghold. The town began to deteriorate over the years, and the Bosnia War left further damage to the town. It was only in 2000 when the Government initiated a programme to protect Počitelj from further loss of cultural heritage and to restore damaged and destroyed buildings.

The Kula (also known as the Fort of Počitelj) dates back to 1383, when it was a part of the fortified citadel commissioned by Bosnia's King Stjepan Tvrtko. The tall tower can be climbed - the entrance had a pretty high step and the climb up is a steep and a little narrow, but do climb it as the panoramic views from the top is absolutely stunning.

With a height ranging from 26 to 28 metres, the Kravica waterfall (not Kravice waterfall) was created by the flow of the river Trebižat. What makes the waterfall unique is not really the fall itself, but the setting that the fall is in. Surrounded by a wide variety of plants - trees such as cedar, chaste, poplars and figs - as well as moss and lichens, it creates a serene and picturesque view.

The pools below Kravica waterfall is also a swimming area, and together with the small restaurant next to the waterfall, a picnic area and a camping area, I can only imagine that it will be extremely full of people during summer. (I'm not very sure about the exact camping area and rates, but you can check out this site for all the campsites in Mostar here.) As we were there in October, the crowd was significantly lighter (not crowded at all like the photo on changing area banner), so we could find a quiet spot for some nice photos.

For our day trip out, we flagged a taxi and negotiated with the driver (his English was limited) to book his services for the whole day. The driver originally wanted to charge based on the meter but as we weren't sure what the meter rates are, we negotiated for a fixed rate of €60 (paid when we reached back to Mostar), and we also treated him to lunch at Počitelj. We checked with the tour groups in Mostar and the charges range from €30 to €40 per person, and may not cover all the places we went (Blagaj, Počitelj and Kravica Waterfall). Our day trip to cover the 3 places took about 6 hours.

And that's it for Mostar, and also Bosnia and Herzegovina! Check out our previous travelogue or itinerary: