Between 1975 and 1979, a genocide was carried out by the Khmer Rouge regime, led by Pol Pot. It was estimated that between 1.5 to 3 million people were killed, which is almost a whole generation of people in Cambodia. Up to 20,000 mass graves, known as Killing Fields, were uncovered throughout Cambodia. We decided to visit one of the Killing Fields, Choeung Ek Genocidal Center, and Tuol Sleng Genocide Museum - it seemed wrong to list them as popular, but I have to say that one should visit these 2 places to learn about the history of Cambodia and the atrocities inflicted to the people of Cambodia.

(Some of the images below may be a little disturbing, so... be prepared.)

We took a tuk tuk, an auto rickshaw, a few distance away from our hotel and negotiated with him to bring us to these 2 places. I think it costed us about US$15 to US$20 for the day trip. We first head to the Choeung Ek Genocidal Center, which is located about 15 kilometres South-West of Phnom Penh. Before we were out of the city, our driver stopped at a convenience store and bought for us and himself some face masks - as the road ahead are mainly dirt roads, with sand and dust kicking up like a storm by the vehicles.

I remembered the place was very quiet... and eerie. It was horrifying, learning what the Khmer Rouge had done to these people - their own people. 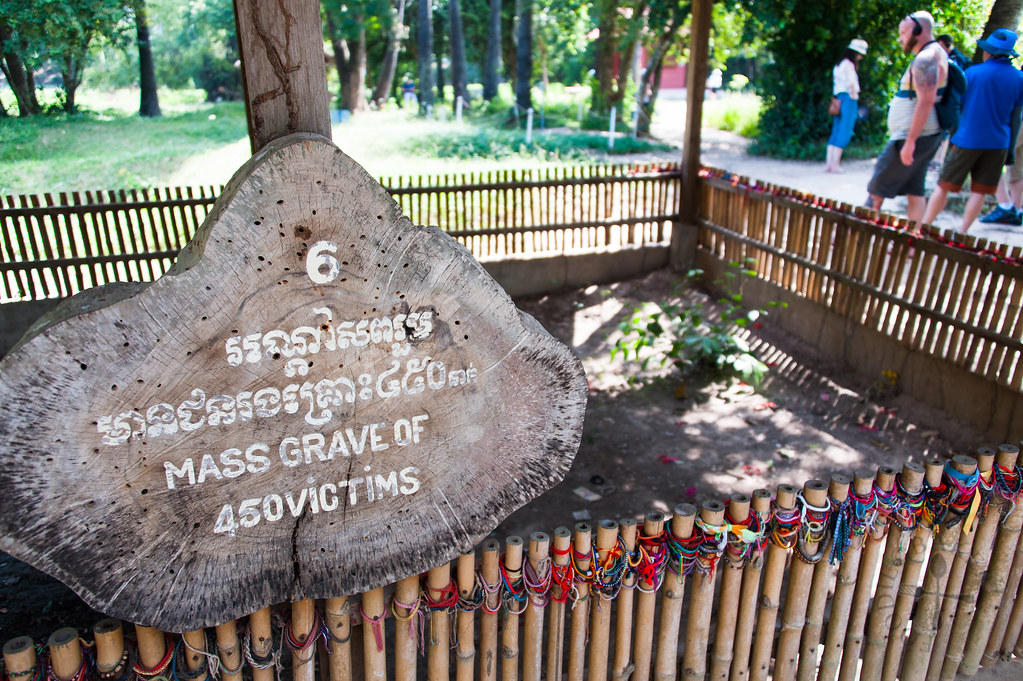 It was hard to describe how we felt after the audio tour - it was painful, depressing, and heart-breaking, and we left the Center with a heavy heart. I strongly encourage tourists to visit the Center to learn more about the Khmer Rouge and the genocide. This blog post has an excellent narration of the audio tour.

We walked through the museum without a guide, visiting each classroom one by one. Most of the classrooms were prison cells, some were torture rooms, while some have been converted to display pictures, photos and the tools used to torture the prisoners. Wikipedia has covered quite extensively the living conditions of the prisoners - it was horrid.

Prisoners were tied and lifted upside down to be interrogated. Once they lose consciousness, the interrogators would dip the prisoners' heads into the jar below them, which was filled with filthy water, to wake them up. The interrogation would then continue...