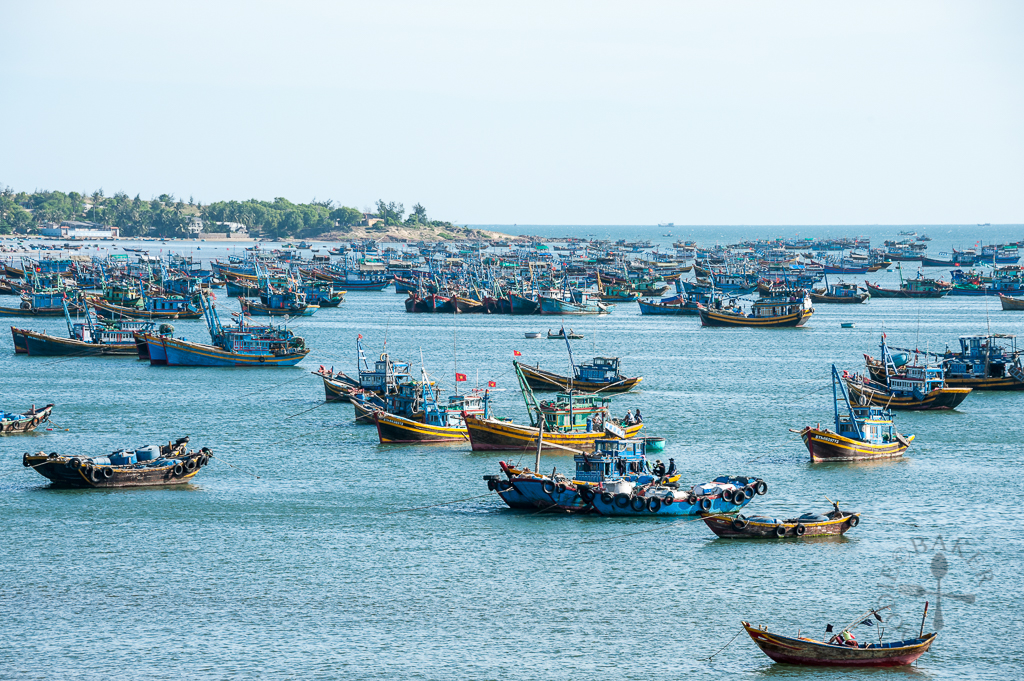 Mui Ne is a fishing town in the Southeast region of Vietnam, but over the years, its 12-kilometre long sweeping bay is being transformed into a popular tourist / resort destination, coupled with many water sports options. X, I and 3 of our friends visited Vietnam in November 2014 and Mui Ne was our stop after Ho Chi Minh. However, we didn't do much water sports there (except to soak in the swimming pool at the resort and in the sea), but spent most of our time exploring the fishing town and eating our way through Mui Ne (what's new, right? And don't forget to check out our Ho Chi Minh eats here!)

There a few options of getting to and fro Mui Ne - by train, by bus, by taxi or renting a car and driving there. I'll skip explaining the last 2 options as they are often out of budget for most travellers.

Instead of purchasing train tickets directly at the train station, which has a risk of running into a non-English speaking ticket seller, we bought the train tickets to Mui Ne from an agency located at Phạm Ngũ Lão street. As it's the backpackers street, there are a lot of agents there so you can check out a few before deciding on one. The agent took our orders, called the train station to enquire the availability, then head down to the train station to purchase the train tickets for us. The train tickets cost about VN$176,000 (varies depending on the class of seats) while the agency fee is about US$1 to US$2 per ticket. As we also bought a tour package and the bus tickets back from Mui Ne, our friend managed to bargain for a discount.

The official website for the railway is at www.vr.com.vn. (See here for the train timings and here for the prices - use Google Chrome to translate the page to English.) SPT2 and SPT4 are trains travelling from Ho Chi Minh (Saigon) to Phan Thiet while SPT1 and SPT3 are trains travellling from Phan Thiet to Ho Chi Minh. Any of the other websites that you've Googled are most likely agencies' websites (especially if they are in English), in which the prices for the tickets are likely more expensive but they may have the option of delivering the tickets directly to your hotel.

As there is no train station at Mui Ne, the nearest train station is Phan Thiet Station, and the second nearest being Binh Thuan Station. At Phan Thiet, you have the option of taking a taxi or a mini-bus to the hotel while at Binh Thuan, there are only taxis available (and since the distance is further, it will cost more as well). Mini-bus costs US$1.50 per person while taxi rides will cost around US$20. Make sure you have the address of your resort / hotel ready as the driver may not know the name of the resort / hotel you are staying (especially if your resort / hotel is not a popular one).

Getting there:
Board bus at travel agency → 6 hours bus ride to Mui Ne → alight at resort/hotel
(same vice versa)

Most bus operators offer a few timings for the bus ride from Ho Chi Minh to Mui Ne (and vice versa), ranging from morning to midnight. As the bus ride is going to take 6 hours (and more), we saved a night's accommodation by choosing to take the midnight sleeper bus from Mui Ne back to Ho Chi Minh (sorry no photos). We purchased the bus tickets from the same agency that we bought the train tickets, around US$14 per ticket.

The bus was supposed to pick us up at midnight but was late (so relieved when the bus finally came). After loading our luggages and before boarding the bus, we were handed plastic bags to keep our shoes. As it was already late, I was knocked out for most part of the ride (I fell asleep easily), except to wake up for a toilet break. The ride was pretty comfortable but a little chilly, and while they do provide a blanket, it pays to have a jacket with you.

So bus or train?

Taking the bus may or may not be comfortable for some, and especially if you have are a light sleeper or have difficulty falling asleep, you might not be able to get a good rest on the bus. In addition, buses are susceptible to traffic/delays - so you should budget at least an additional hour to your plan. However, it is cheaper and more convenient as the bus will pick you up or drop you at the Mui Ne resort / hotel and there are more timings to choose from. At Ho Chi Minh, you just have to go to the agency to board the bus.

Even though there is no train station at Mui Ne, I personally still prefer the train as it's faster, safer, more reliable, no worry of a lack of toilets or snacks (see photo below heh), and the scenery is nicer (beautiful countryside view!) However, if you haven't tried sleeper bus before, I will recommend giving it a try at least once as it's quite an interesting experience!

Now that we have transport out of the way, let's see what are the things to do/see in Mui Ne! 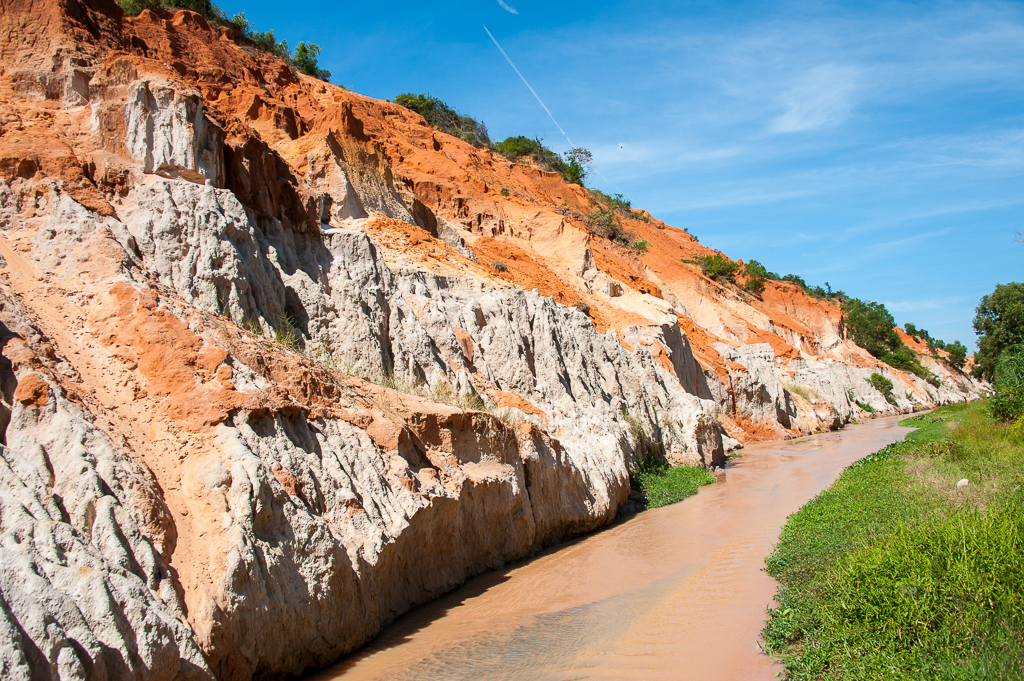 The Fairy Stream popped up quite often during X's research on what to do in Mui Ne, and since many claimed that the place is magical and beautiful, we decided to pay a visit. As most of us (4 out of 5) don't have a motorbike license, we hired a taxi driver for half a day (can't remember the price but it's definitely pricey) to bring us to Fairy Stream and the fishing town.

Fairy Stream is a little river that in parts, resemble a miniature version of the Grand Canyon (well I can't say for sure as I haven't been to the Grand Canyon before). On one side there is the trees and luscious greens and on the other side are the reddish dunes. The Fairy Stream is free, so beware of the locals who want to be your guide or want you to pay an "entrance fee". We just walked past these locals and head straight for the stream. 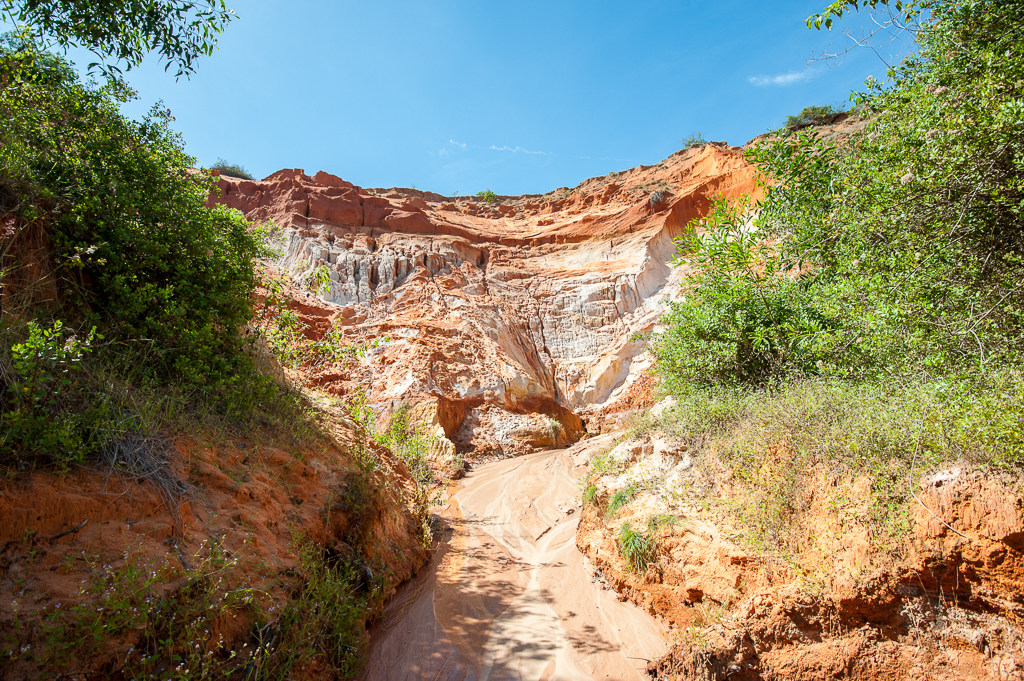 The water wasn't deep at all, it's mostly ankle to knee-deep, so it's unlikely you will have trouble wading through the stream. Fine, red sand is washed off the dunes and into the water, making the stream reddish in colour and the soft sand makes it pretty pleasant to walk in (just avoid the sand/stone that are not in the water, they are scorching!) 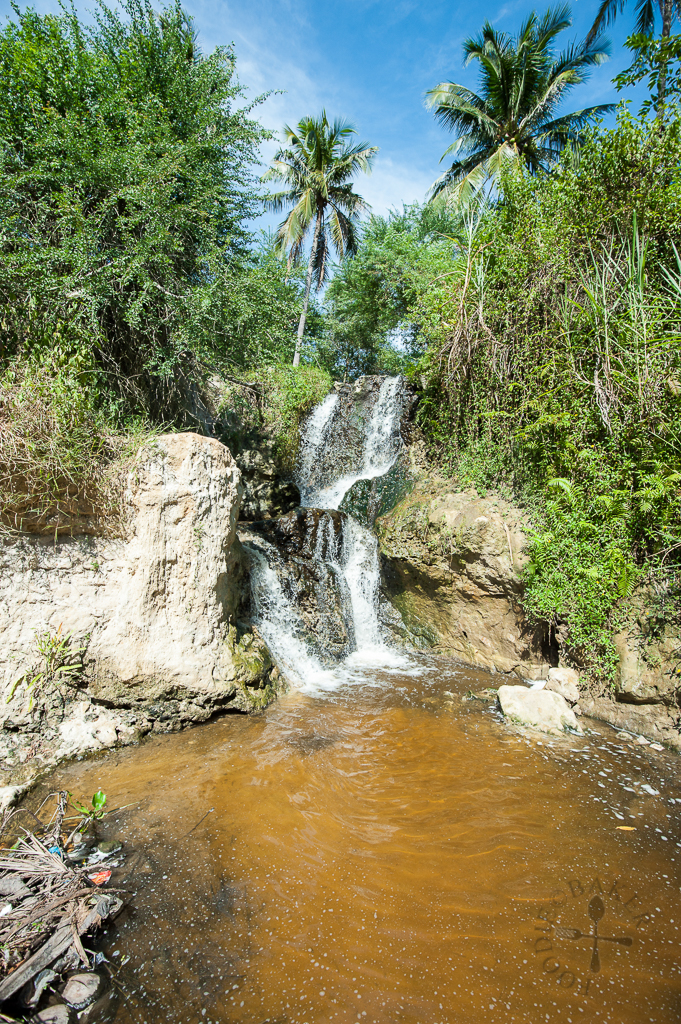 X read online that there is a waterfall at the end of the Fairy Stream and we were all looking forward to it until we reached it - a tiny waterfall that left all of us disappointed. To me, a waterfall must be big and majestic! And as it was a dead-end at the waterfall, we had to U-turn and head back the same way we came from.

Along the Fairy Stream, you could also make a detour and do some ostrich riding, though we didn't. (The ostriches didn't look very well-maintained too.)

As we were walking back, we climbed up the sand dunes to get a bird's eye view of the place and spotted more people wading through Fairy Stream.

To be honest, the weather was too blazing hot to enjoy the Fairy Stream fully, and though I'm not expecting real fairies to appear, I felt the place was a little over-rated, but perhaps I was feeling too warm to be thinking clearly.

Moral of the story? Try not to have too high an expectation when visiting a place, that way you will probably enjoy the experience more!

Sunrise at the white sand dunes is something not to be missed in Mui Ne. We booked a jeep tour from the travel agency opposite our resort (it will be more expensive to book the tour directly from your resort) and woke up early the next day for a 1-hour jeep ride to the white sand dunes. Unfortunately I cannot remember the price but I've researched online and it's about US$10 per person. I've also read that there are motorbike tours to the sand dunes too, so you can check it out with the various tour agencies before deciding on one. 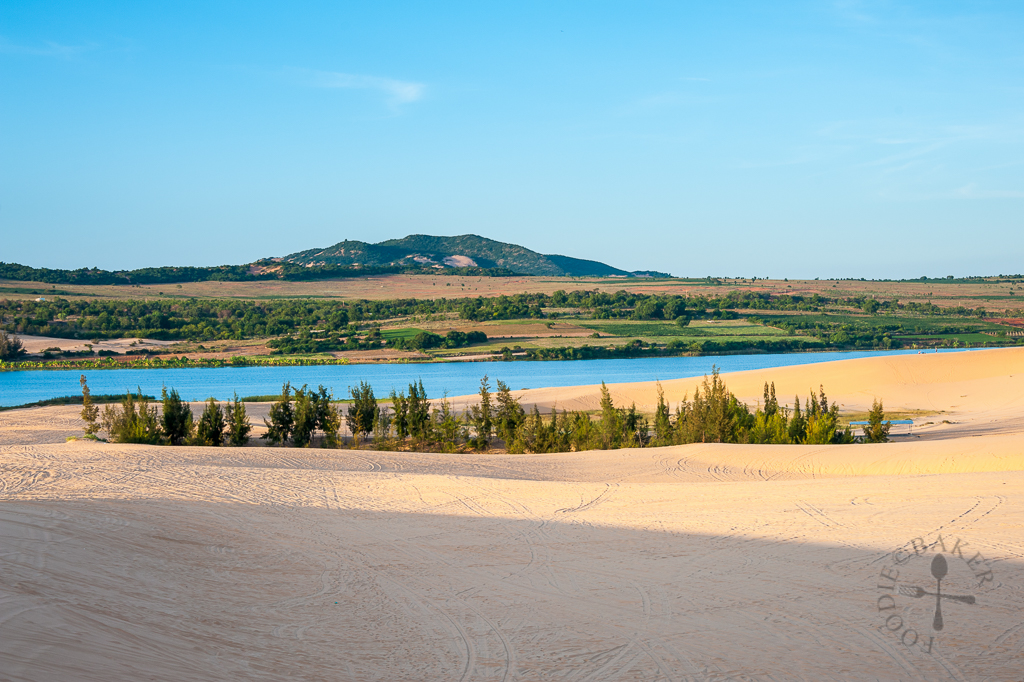 When we reached the white sand dunes, we saw a "sea" of red - and I remember asking X groggily, "I thought we were at white sand dunes?" It turns out that the sand was "dyed" red temporarily by the rising sun. (How silly of me I know.) 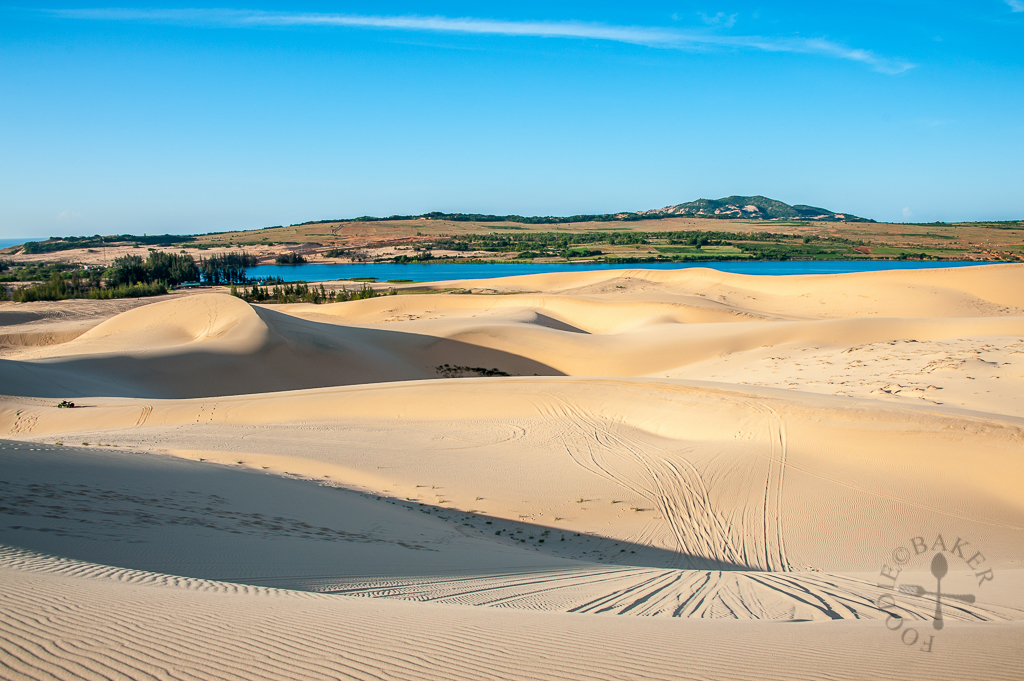 The sand is so fine that it's impossible to walk in your slippers - wear sandals/shoes or just go barefoot. There were rocks "hidden" at the start of the sand dunes, so be careful as my friend accidentally kicked into one of them (I'm sure you can imagine how painful that is).

We passed by an ATV rental monopoly and since reviews online said that the ATVs weren't well-maintained and are likely a rip-off, we didn't check them out. 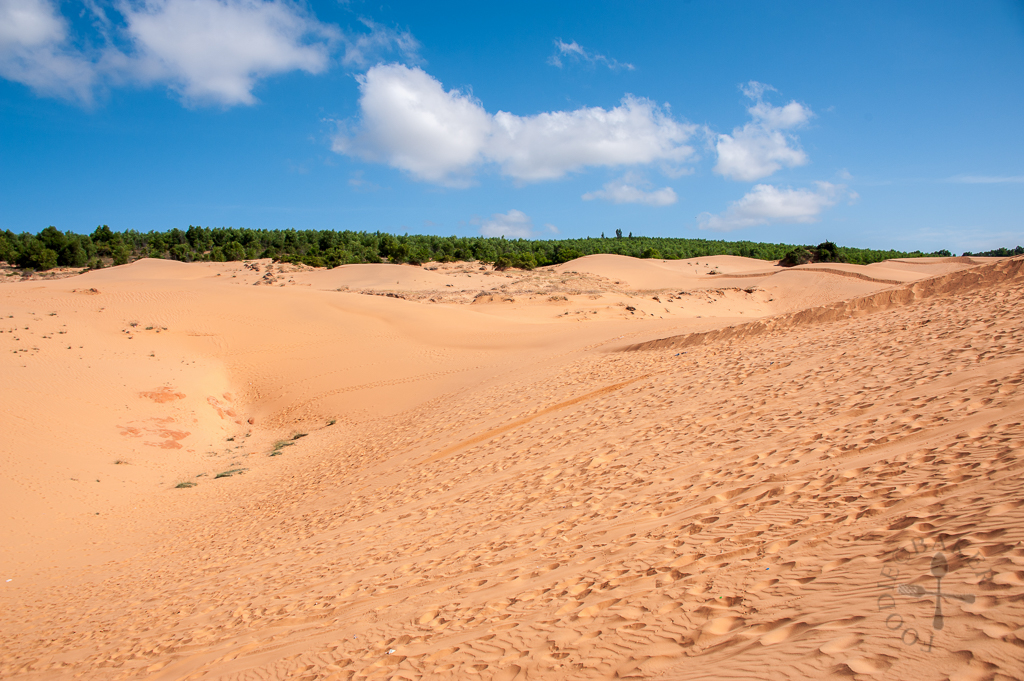 After lazing around at the white sand dunes, our jeep took us to the red sand dunes, by then the weather is getting really warm and walking on the sand barefoot proved to be a real challenge (probably even more challenging than walking with your slippers on). 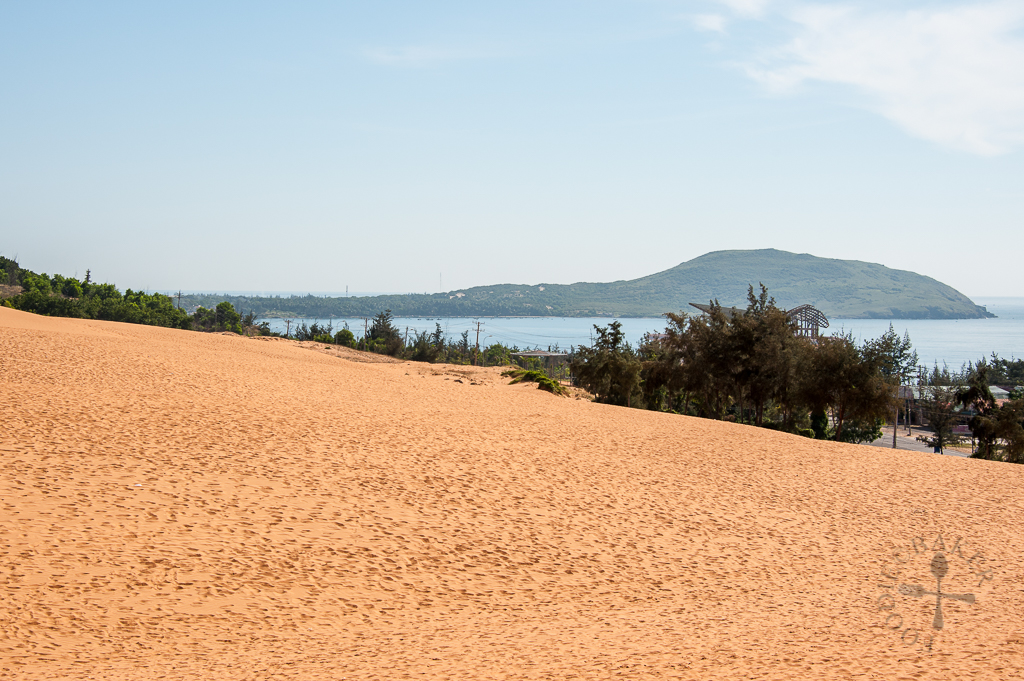 The red sand dunes do not have the same wow factor as the white sand dunes as it's a lot smaller. Our experience was also partially ruined by the rude local kids who kept bugging us to rent the sled (which is actually a plastic board) from them. After some bargaining, I ultimately rented one from the nicest kid and had a teeny bit of fun sledding down the sand dunes.

Just a word of caution - always pass your belongings to your friends to look after! We have read online that some will try to rummage through your belongings while you have fun or ask for another tip before returning the bags to you.

Before heading back, the jeep also stopped at the fishing town. We missed the hustle and bustle in the early morning as we were at the sand dunes but there were still fisherwomen at work when we reached there. 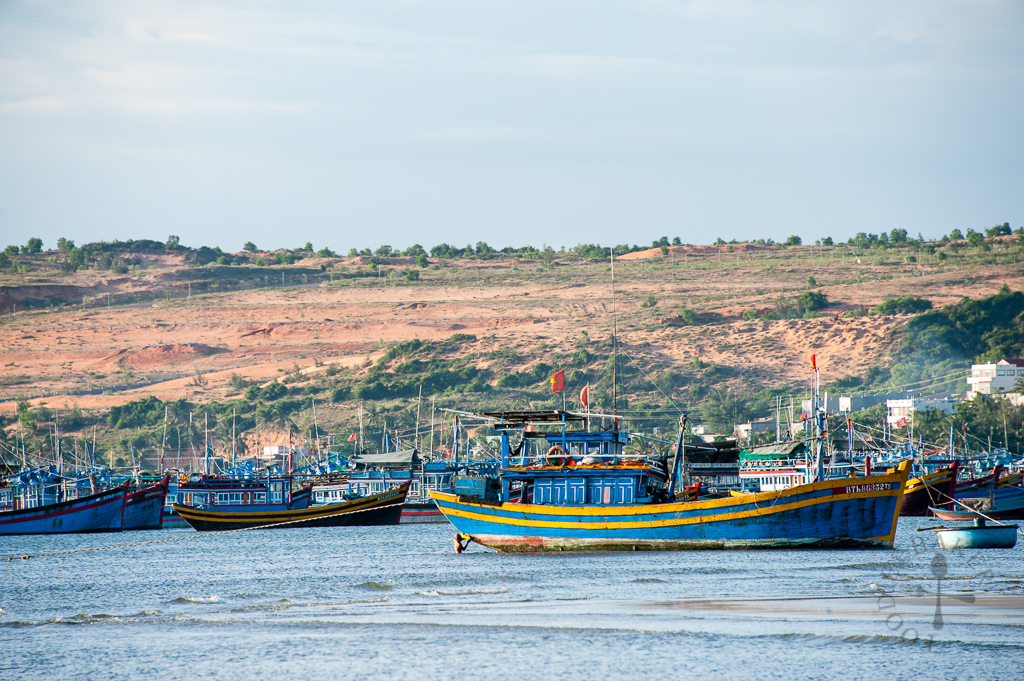 After the tour, we head back to the resort for some rest before heading out again for lunch and more exploration. As a taxi is too expensive, we decided to give motorbikes a go. Our friend, who is the only one who have a motorbike license, gave X and another friend a crash course and soon we were on our way. X was the driver and I was the pillion - I must say it's a little scary but thankfully we were able to drive around safely. The traffic at Mui Ne wasn't too bad and it was pretty easy to navigate around without getting lost. The good thing about renting your own transport is the ability to stop whenever you want and eat whatever we want - which I'll share in the next travelogue! Stay tuned!