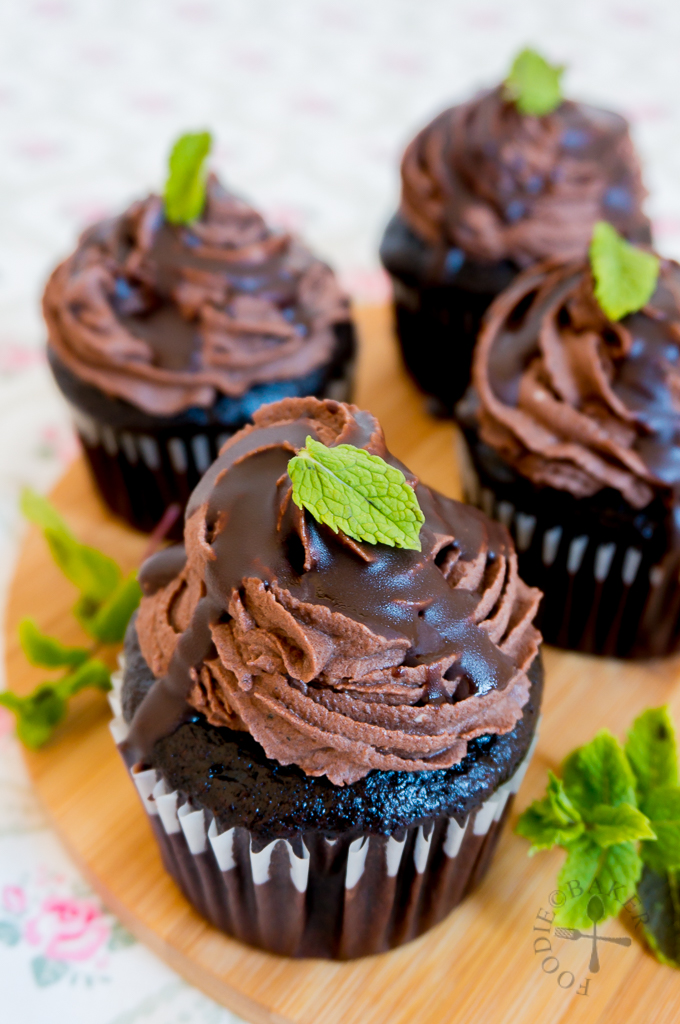 This intensely chocolatey and moist chocolate cupcake, frosted with a refreshing and not-too-sweet chocolate and mint buttercream, then drizzled with a luscious and rich chocolate ganache, is perhaps one of the most delicious and chocolatey cupcakes I've ever baked and eaten.

I actually have another Devil Food Cake recipe (which is featured here), but this is much more chocolatey and moist. So, I guess I'll be using this cake base more often now!

The original recipe calls for a sour cream frosting, but since I had no sour cream at home and the weather was too excruciatingly hot for me to walk out and buy (okay fine, just call me lazy), I decided to make a buttercream - which was a very standard recipe by creaming butter and icing sugar together. I added freshly chopped mint and vanilla for flavour, then realised the buttercream is too sweet for my liking, so I dumped in cocoa powder, which cuts back the sweetness and firmed up the buttercream into a piping consistency.

Usually I would sift the icing sugar and cocoa powder to get rid of lumps, but since X and I were going to be the only ones eating the cupcakes, I didn't bother sifting - please don't be so lazy like me!

Anyway... I love how the frosting turned out - the mint flavour really came through and was not overpowered by the cocoa powder. I could taste some tiny bits of mint leaves in the frosting (plus some lumps of icing sugar oops), which might be weird for some, so I will suggest using mint extract if you don't want to taste the bits. But then again... why use artificial when I can use the real deal? 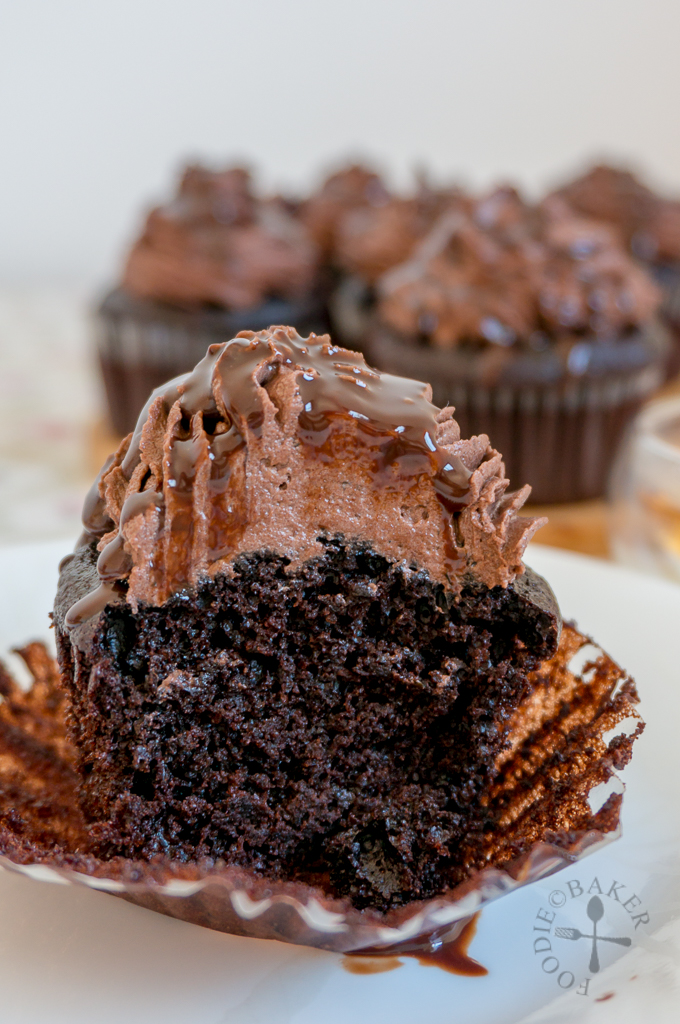 The ganache is a simple mix of cream and dark chocolate in the ratio of 1:1. It is purely for aesthetic purposes (I love photos of ganache dripping down cakes) and can be omitted if you don't want a third component. Do let the ganache cool so that it thickens into a pouring consistency. If you did not let the ganache cool, it will melt the frosting and you'll end up with a mess. 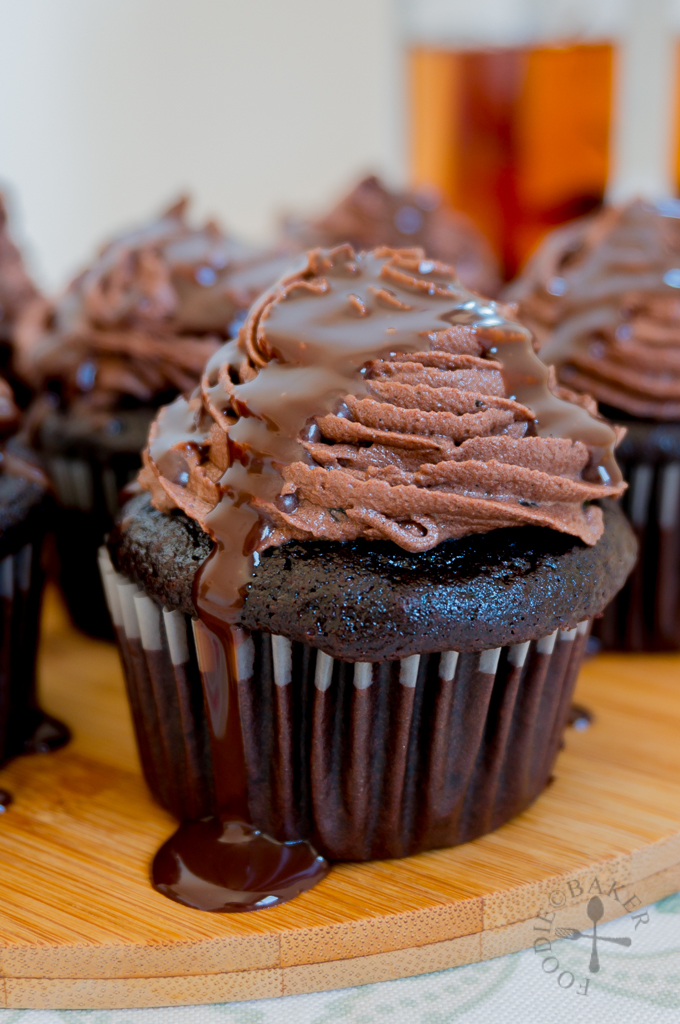 What can I say? This cupcake is simply too pretty, too chocolatey, too delicious and too good to share (oops!) It's one of the rare times that I broke my rule and had one of these after dinner! (I usually don't eat anything sweet after dinner, unless I'm out having dinner.) This is also the first time I tried a mint frosting (I've never bought the extract as I knew I wouldn't be able to finish it before it expires) and I love how it turned out. Can't wait to use the fresh mint leaves to create more mint desserts!

And now, here are the step-by-step photos!

I'm submitting this to Bake-Along #83 : Devil's Food Cupcakes hosted by Zoe from Bake for Happy Kids, Joyce from Kitchen Flavoursand Lena from Her Frozen Wings.

By the way, if you love cupcakes, check out this one below, it's one of my favourites! 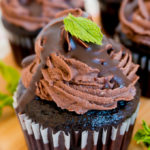 - If using natural cocoa powder, omit the baking powder and use ½ teaspoon baking soda. - To make your own buttermilk, stir 60 ml (¼ cup) milk with 1 teaspoon vinegar / lemon juice together. Set aside for 10 minutes before using. - Instead of using the plain flour and cornflour combination, you can use cake flour instead if you have it on hand. - The batter is quite liquid-y, so use an ice cream scoop to scoop the batter or transfer the batter into a measuring cup to fill the paper liners. - Do not overbake the cupcakes else they will become dry. - Cupcakes can be made in advance and stored in an airtight container in the refrigerator. To acheive the dripping ganache look, make the ganache just before serving. - Adapted from Bon Appetit by Barbara Fairchild
Tried this recipe?Mention @foodiebaker or tag #foodiebaker!