Our first day in Iceland started on a cold Saturday midnight, which was when we arrived in Iceland. After an hour of bus journey from the airport to Reykjavik (see this post point 5 on how to take bus here), we checked in into our AirBnB. After a much-needed shower, we immediately head for the bed and didn't wake up until about 9 a.m. We are not due to collect our car until the next day, so we spent the rest of the day walking and exploring Reykjavik.

Tourist Center and Getting Our SIM Card 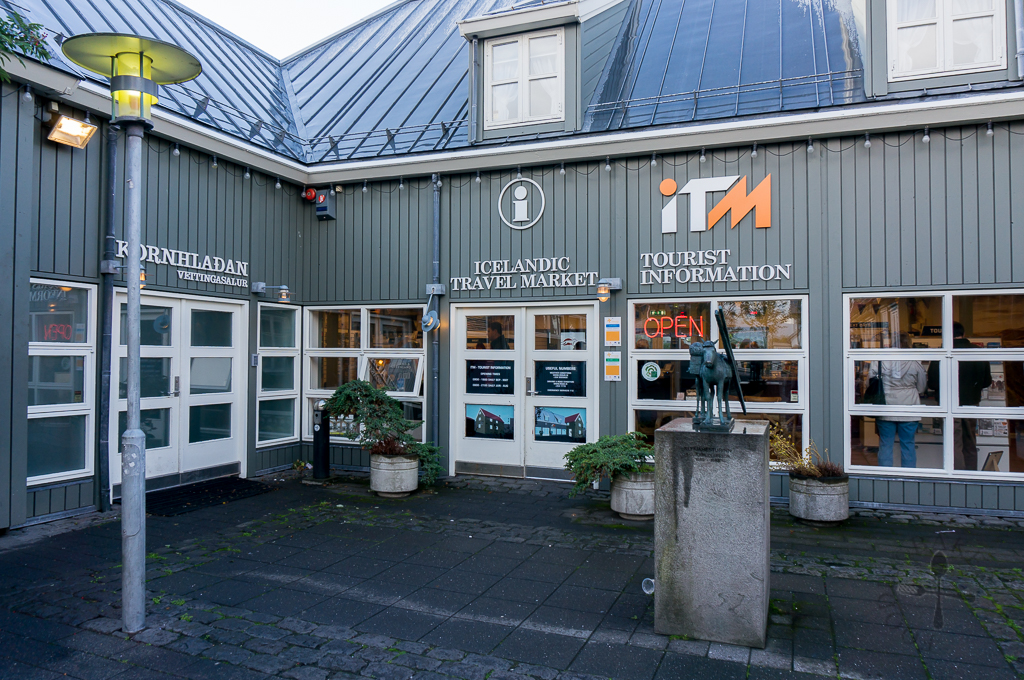 The weather was cooling at 11 degrees Celsius. Our first stop was the tourist center, which is a great place to pick up some maps and information, especially the Big Map, which shows all the routes in Iceland. Though we will be relying on Google Maps most of the time, the Big Map is still more accurate and up-to-date (especially for the highland routes).

I did a bit of research on food and had a hard time deciding where to eat - after all, Iceland food is not cheap and I don't want to break the bank on our first day. So I chose a burger bar, which is located pretty near the church Hallgrimskirkja. We had a bit of trouble finding it at first because the renovation work carried out on the building obscured the signboard. 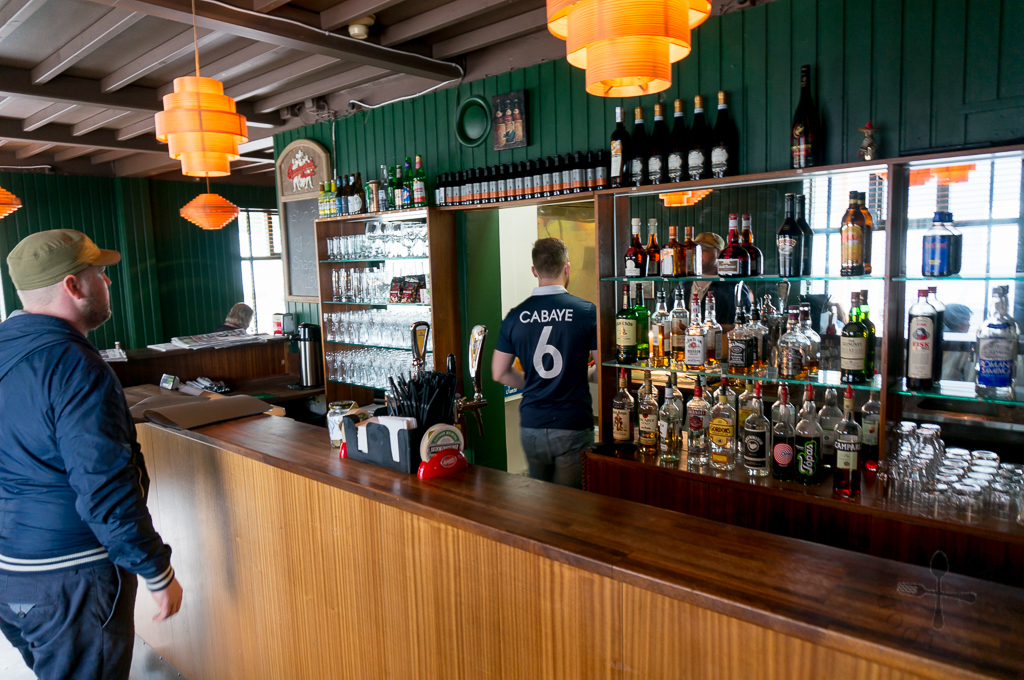 It's definitely too early for an alcoholic beverage and I was saving my caffeine intake for another café, hence we only asked for tap water. Vitabar reputedly offers the best burger in Reykjavik, so we ordered a burger each. With no service charge or tax, the burgers don't come with any side dishes, so we ordered an additional plate of onion rings to share. We had not eaten burgers for a few months so it was really satisfying to bite into the soft bun and medium-cooked beef patty. It may not be the best burger we have eaten, but for the price, it's definitely value-for-money and one of the cheapest meals we had eaten in Iceland.

Hallgrimskirkja, a popular tourist attraction in Reykjavik, is a national monument dedicated to Hallgrímur Pétursson, the most renowned religious poet of Iceland. Built in 1945 and consecrated in 1986, the church has a 73-meter high tower which enables one to have a bird's eye view of the whole of Reykjavik. The church is more beautiful in the evening when the evening sun lit up the front face of the church. 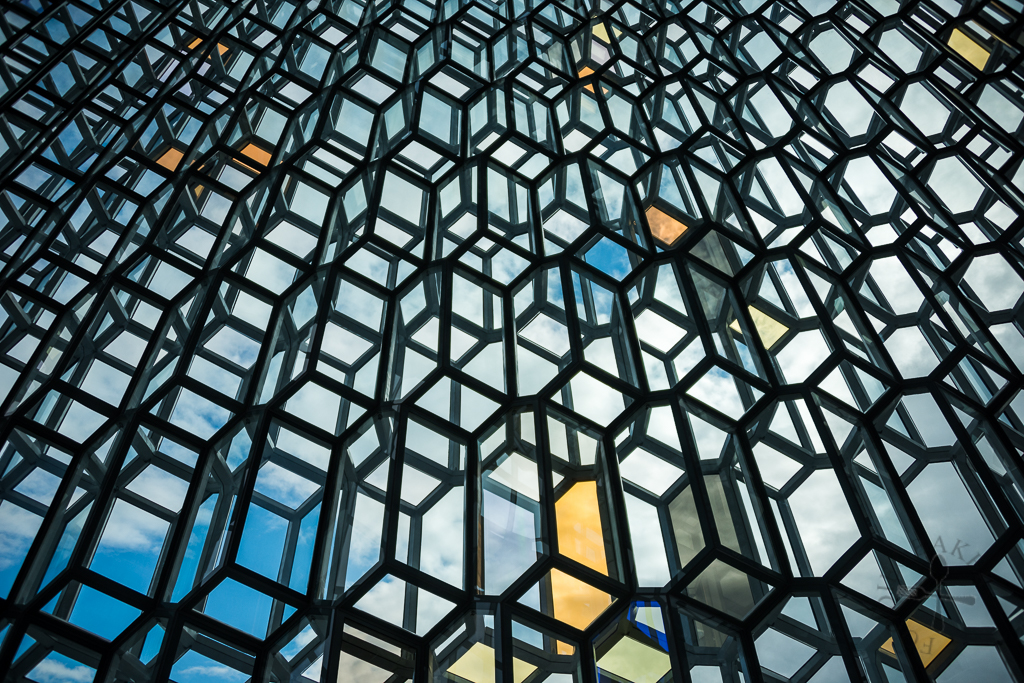 Officially opened in 2011, Harpa is a concert hall and conference centre designed by Danish architectural firm Henning Larsen Architects and Icelandic architectural firm Batteríið Architects. We were not there to catch any concert, but to see the interesting steel framework clad with geometric shaped glass panels of different colours, and partly to escape from the abrupt showers.

After the rain has subsided, I decided it was time to grab my coffee fix, and off we went to Reykjavik Roasters, perhaps the most popular coffee place in Reykjavik. Perhaps because it was a Saturday, the whole café was bustling with people and we were really lucky that a pair was leaving when we reached, allowing us to be seated next to the old-school record player.

X was still digesting the burger he had eaten earlier so with no one to share the food with me, I ordered a cappuccino and a homemade cake. The ground beans were carefully weighed before they were brewed into a perfect cup. The cake, topped with almond flakes and apple slices, was soft and tender with a lovely hint of cinnamon. flavour. With the record player playing soothing music in the background, this is how I wish I can spend everyday (I'll need to keep dreaming).

We decided to have a slightly early dinner as X wanted to take photos of Harpa during blue hour. Opened in 2000, Ostabudin sits conveniently on Skólavörðustígur street. I initially wanted to go in and try the highly raved fish soup but in the end realised the soup is only served during lunch hours. As X and I were still not hungry, we ordered a soup, a side and a main to share.

When our starter came, I was surprised by how a simple plate of smoked and cured salmon can be arranged until so beautifully. The tangy buttermilk sauce goes surprisingly well with the soft and tender salmon pieces.

The soup has a generous serving of shrimps, scallops and fish fillets and it's quite watery even though it was stated that it's thickened with coconut milk. The curry taste was a tad too strong for our liking, as it masked the freshness of the seafood.

I should have enquire about this dish before ordering it was actually a pan-fried and baked salted cod - hence the cod was extremely salty. It was so salty that I cannot say that I enjoyed it very much. Served with a mayonnaise-based sauce, I wished that the sauce has a bit more tang in it to offset the saltiness of the fish.

Overall we spent ISK 7,350 (SGD 78 / €52) for this dinner, which by my standards is very expensive. Furthermore, we chose the wrong main dish so we didn't enjoy our dinner here as much as others did. It wasn't the best meal we had, but there would be many more to come!

After spending a few hours waiting for the sun to set in Harpa (I was chilling inside the Harpa while X was out taking photos heh), we retired to our AirBnB for an early rest in preparation for the big day tomorrow - collection of our rental car!

To be honest, I found Reykjavik pretty small, so one can easily finish exploring the sights in one day (on foot!). We actually visited Kolaportið Flea Market (64.14872, -21.93802) in the day but the place was so crowded and unless you are interested in horse meat or shark meat or second hand clothes (which we weren't at all), there is really not much to do there (we didn't even take any photos there!) Anyway, the highlight of this trip is not city life, but Mother Nature, which will start in the next travelogue! Stay tuned!