Lucerne (aka Luzern in German) is actually our first stop when we reached Switzerland - its close proximity to two of the most famous mountains of Switzerland, Pilatus and Rigi, makes it an extremely popular tourist destination. I usually don't like visiting cities because after skipping all the museums, there wouldn't be nothing much left to see/visit. However, this beautiful city proved me wrong and here are 5 things to do/see in Lucerne!

All living things that fly or leap
Or crawl or swim or run or creep
Fear Death, yet can they find no spot
In all the world where Death is not.
Verse found in Spreuerbrücke

Lucerne once had three (now only two left) sheltered, wooden pedestrian bridges that are the oldest in Europe - the 14th century Kapellbrücke and Hofbrücke (destroyed in the 19th century), and the 15th century Spreuerbrücke. The numerous images painted in the bridges made them even more unique and special. The Hofbrücke featured biblical scenes, the Kapellbrücke depicts events from Lucerne's history, and the ones in Spreuerbrücke are based on the 14th century "Dance of Death".

Spreuerbrücke was built in 1408 as part of Lucerne's fortifications, with a chapel, dedicated to the Virgin Mary, added in the middle in 1568.

Built originally in 1333 also as part of Lucerne's fortifications, Kapellbrücke (Chapel Bridge) is also the world's oldest surviving truss bridge. Spanning diagonally across the Reuss River, the bridge was almost destroyed in a fire in 1993 and then subsequently reconstructed. There were a total of 158 paintings but after the fire, the remains of only 47 paintings can be found and only 30 were fully restored as of today.

Both bridges are one of the most visited tourist spots in Lucerne, but Kapellbrücke was a tad more crowded, perhaps because of the beautiful flowers grown along the bridge and the fact that on clear days, the backdrop of Mt. Pilatus makes an incredible postcard-worthy photo.

I don't really think this is an attraction, but watching the waters gushing through the Nadelwehr was oddly... soothing. Nadeln means needles, and these spikes were built in 1859-60 to regulate the water level of Lake Lucerne.

Constructed in 1666, the Jesuit Church is the first large sacral Baroque church in Switzerland.

The Löwendenkmal is a sculpture designed by Bertel Thorvaldsen, sculpted in 1820-21 to commemorate the Swiss Guards who were massacred in 1792 during the French Revolution. The sculpture was pretty huge and I was quite blown away by its sheer size. It depicts a dying lion impaled by a spear, covering a shield bearing the fleur-de-lis of the French monarchy, with another shield bearing the coat of arms of Switzerland next to it. The names of the officers, approximate number of soldiers who died and survived were carved below the lion sculpture.

Fun fact: If you look carefully, you will notice that the lion sculpture is embedded inside a pig-shape alcove. Before the monument was completed, Bertel Thorvaldsen learned that he would not be fully paid for his work due to insufficient funds. Wanting to express his disdain but out of respect for the fallen soldiers, Bertel chose not to damage the sculpture but instead change the shape of the alcove the lion lay inside to be the shape of a pig.

Near the Löwendenkmal, there is a charming half-timbered house built in 1859, which was converted into a restaurant in 1931. It's a pretty expensive restaurant, so we did not dine there.

Take a stroll through the old city squares in Lucerne to experience how tradition and modernity are weaved together to create picturesque scenes. The Kornmarkt dates back to 1356 and was the grain market place until the 19th century.

Kapellplatz is a square surrounding St Peterskapelle (St Peter's Chapel), an 18th century chapel that was built over a former 12th century church. On the square there is also a unique Fritschi Fountain that was constructed in 1918. in older Renaissance style. There happened to be a performance at Kapellplatz with live band, singer and a tap dancer when we were there, which was really cool!

The above mnemonic helps the locals to remember the 9 spectacular towers in Lucerne - Nölli, Männli, Luegisland, Wacht, Zyt (Time), Schirmer, Pulver (Powder), Allenwinden and Dächli. These towers and the wall dated back to 1386, built to protect the city from invaders. From 1 April to 1 November, 4 of the towers can be accessed by travellers, and out of these 4, it's possible to climb to the top for 3 of them.

We started at Schirmer Tower (Schirmerturm), which first involved a slight steep climb up the hill from the old town to the tower. The Schirmer Tower dated back to 1420 and served as the gateway from the city to the countryside. It stands at 27.5 metres tall and is made of polished stones and features fitted cornerstones. Unfortunately, the foliage blocked the tower so it's impossible to take a clear shot of the tower. The tower was partially destroyed by fire in 1994 and restored in 1995. 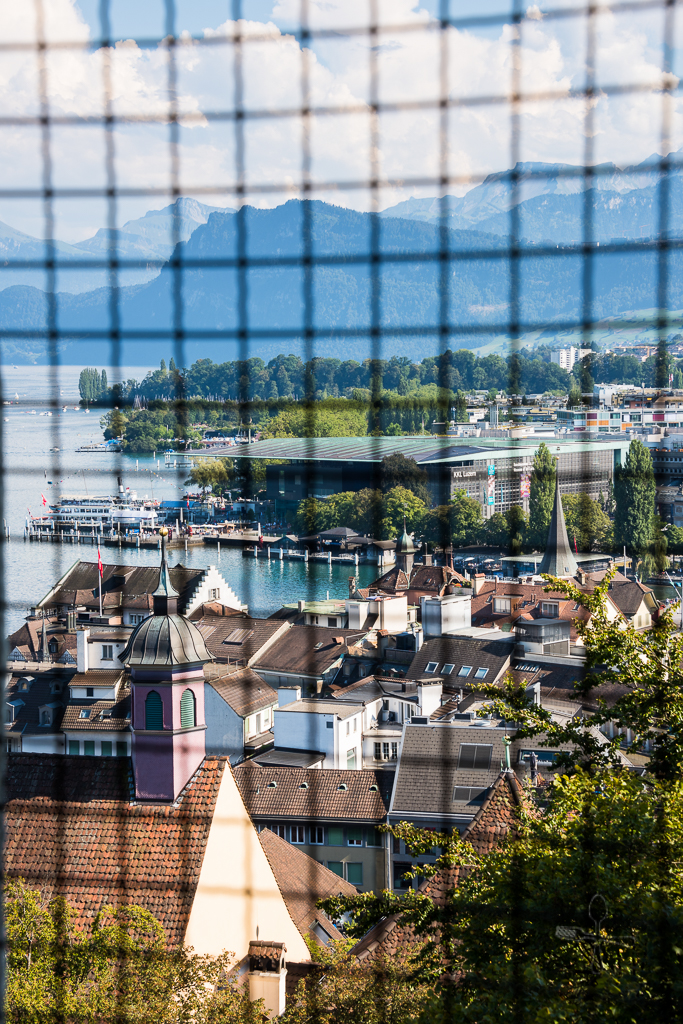 We entered Schirmer Tower and proceeded with the climbing of steep and narrow steps. The steps were so narrow that I could only put half of my feet on top! When we reached the top, we saw that all the windows were blocked by grills, perhaps to prevent birds from flying in to dirty the place. Nevertheless, we had a beautiful view of Lucerne.

We climbed down halfway from Schirmer Tower and exit the opening to the Musegg Wall. We walked along the wall (not really for those who are scared of heights), then entered the Zyt Tower.

At 31-metre tall, we climbed all the way up the  Zyt Tower (Zeitturm) and were treated to a superb panoramic view of Lucerne (though the windows were blocked by glass panels). Zyt means time, and we will be returning in just a bit to see the interesting clock exhibition in the tower.

From Zyt Tower, it's possible to climb down all the way to the bottom, but don't do it. Continue onto the the Musegg Wall to Watch Tower (Wachturm). The tower that stood on Wacht Tower was originally used to store gunpowder. However, when it was hit by lightning in 1701, the gunpowder ignited and caused an explosion which killed 5 people. The 44-metre Wacht Tower was then built over to replace the original tower. The tower is currently under reconstruction so we couldn't visit the top. However, it's possible to climb down the tower and we reached the other side of the Musegg Wall.

We continued straight to Männli Tower (Männliturm), a mysterious tower because experts couldn't determine exactly when this 33-metre tower was built.

The climb up to Männli Tower was a long and steep one - it was tiring but I'm glad we made it because the unobstructed views were breathtaking and beyond stunning. The whole of Lucerne unfolded in front of us and at that moment, any fatigue from all the climbing were blown away by the cooling breeze on top of the tower.

After having a good rest at the top of Männli Tower, we climbed back down and head back to Zyt Tower. The 31-metre tall Zyt Tower was erected in 1403 for defensive and timekeeping purposes. The current clock mechanism was installed in 1535 and the massive dial and numbers enabled the fishermen from the lake to tell the time! The bell chimes one minute before all other clocks in the town.

The Zyt Tower features a few clock mechanisms which were all incredibly impressive. The above is an old clock from Rathaus manufactured in 1526 by Hannes Luter.

I was extremely intrigued by this clock because instead of a usual circle clock face, it's a semi-circle clock face. It was estimated that the clock was manufactured around 1700 by an unknown watchmaker. There are no separate hour and minute hand - there's only a single hand with arms of 2 different lengths to indicate the actual hour.

The clock-maker, Leonz Suter, designed the clock for the infantry barracks on Kasernenplatz in 1862. The clock was almost lost forever when the barracks were to be demolished. Thankfully, Franz German, the manager of the real estate portfolio of the hospital of the canton of Lucerne, dismantled the clock with the help of his co-workers before the demolition, thus saving the clock.

The Musegg Wall and Musegg Towers are my top favourite attraction in the whole of Lucerne. The towers are free-of-charge so all you need are some good shoes and some perseverance to make it to the top!

And that's it for Lucerne! I've saved our hike to Mt Rigi for the next post, Next travelogue is now up!