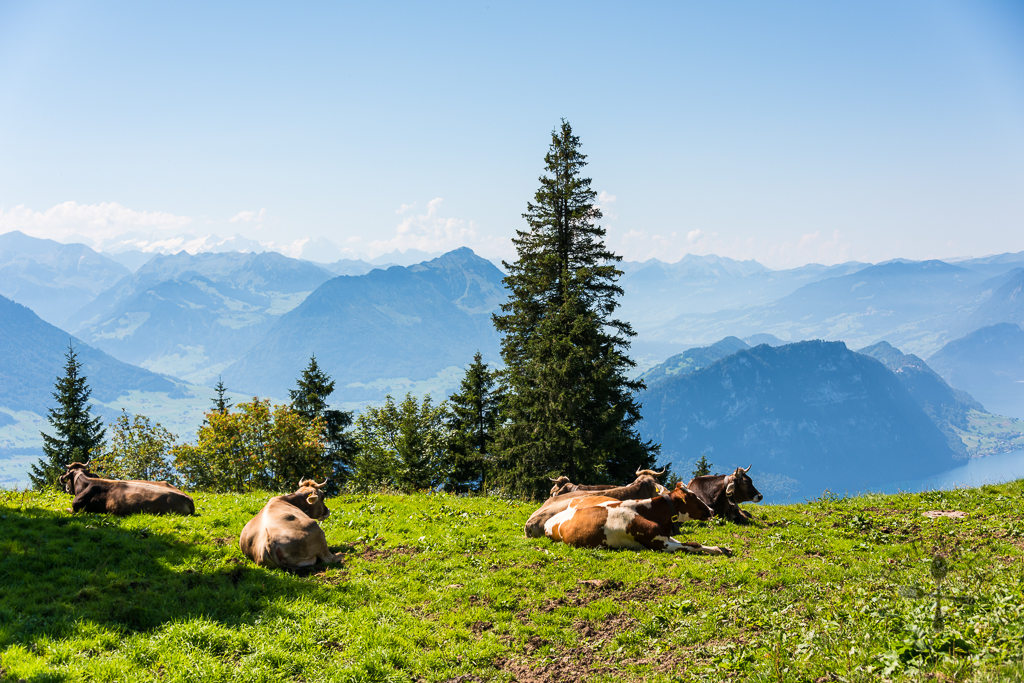 Hello, I'm back after a very long, self-proclaimed Christmas and New Year break (sorry the laziness just kicked in and I couldn't get any post up). But, it's an extremely rewarding break and I'm finally back to finish the last 2 Switzerland travelogues!

We were based at Lucerne for the first few days of our Switzerland trip, and we took two day trips out - one to Bern and one to Mount Rigi. We chose to go Mount Rigi instead of Mount Pilatus as the transport to Mount Rigi is fully covered by the Swiss Travel Pass, and time constraints forbid us to spend another day at Mount Pilatus.

Getting to Mount Rigi

There are several ways to reach Mount Rigi from Lucerne (vice-versa to get back):

All the above transport are fully covered under the Swiss Travel Pass and the timetables for the Vitnau Line, Goldau Line and cable car can be found here. We chose Route 3 as I thought that it would be nice to experience both the cable car and the railway and to see different views.

We started the day early by taking the first ferry from Lucerne to Weggis. The ferry terminal is located right in front of the train station so it's quite impossible to miss it. The second level of the ferry was reserved for first-class ticket holders so don't head up like us cluelessly unless you have a first-class ticket! (And yea we got chased back down to second class in the end.)

The early mist shrouded the mountains surrounding us, which would have been really nice to enjoy in peace, but the chatter from the other ferry passengers... but the views were still beautiful. We alighted at Weggis and watched the ferry continued onward to Vitznau and other destinations.

From Weggis ferry station, we followed the signs (and other travellers) up a steep path to the cable car station. It took us about 15 minutes to reach the station, and we managed to catch the cable car just before it left the station. Unfortunately, the cable car was very crowded and as we didn't manage to stand next to the windows, we didn't get to enjoy the views. Hence for convenience sake, I think it may be better to just take the ferry and change to the train at Vitznau.

It took us only 10 minutes to reach Rigi Kaltbad (1,433 MASL). Rigi Kaltbad is a small resort town but we didn't explore much as we had to change to the cog railway train up to Mount Rigi. I think during peak seasons or crowded days, operators will cater additional trains as we saw two trains on the Vitznau Line at the same train timing.

We learned at Rigi Kulm that Mark Twain hiked up to Rigi Kulm from Weggis back in 1878, which was a grueling 3-day hike! I'm extremely thankful that I didn't have to do the hike, as the cogwheel train brought us up to Rigi Kulm comfortably.

The Vitznau Line (from Vitznau to Rigi Kulm) is the first mountain rack railway in Europe and second in the world. The very first trial run of the Mount Rigi steam locomotive was on 21 May 1870, coinciding with the 53rd birthday of its creator, Niklaus Riggenbach. At that time, the train could only reach up to Rigi Staffelhöhe station (1,550 MASL). It was then extended and in 1873, the train could reach the summit at Rigi Kulm at 1,752 MASL. The Goldau Line, on the other hand, opened in 1875. Even though the lines are differentiated by the colour of the trains - red for Vitznau and blue for Goldau - we actually saw both red and blue trains along the Vitznau Line.

This is the charmingest place we have ever lived in for repose and restfulness.
- Mark Twain

Mount Rigi, also known as the Queen of the Mountains, is a mountain massif that is almost entirely surrounded by 3 lakes - Lake Lucerne, Lake Zug and Lake Lauerz. The word "Rigi" stems from "Riginen" or "Rigenen", which were used by the locals then to describe the mountain's characteristic rock stratification. As time goes by, the words were shortened to "Rigi", and ended up becoming the name for the entire mountain.

We were blessed with extremely good weather and blue skies - the views were simply surreal and too beautiful. Apparently on a clear day, it's possible to spot 7 lakes from Rigi Kulm.

This fairly new chapel was inaugurated in 1967 and is a plain and simple building made of natural stone.

When we were there, we saw an elderly couple carrying an alphorn. They walked around Rigi Kulm, stopping once in a while and the husband would play the alphorn. The alphorn is originally a tool used by shepherd to call the cows from the pastures and into the barn at milking time. It was also used as a call to prayer or as a form of communication.

As with many traditional musical instruments, the alphron was used less and less as time went by. Thankfully, with the authorities' initiatives, the playing of alphorns has now became a tourist attraction and a symbol of Switzerland.

After listening to the alphorn performance, we took a train down to Staffelhöhe to start our hike. Our hike was a combination of two of the many hikes in Mount Rigi (see the details of all summer hikes here), the Classic and the Panorama hike. Our main aim for the Classic hike was the viewpoint at Känzeli, so we skipped the first part which involved walking along the train tracks down from Rigi Kulm.

Känzeli is one of the most popular viewpoints in Mount Rigi because of its easy access - only about a 15-minute walk from Rigi Kaltbad. There is a viewing platform there and the views will simply blow you away: 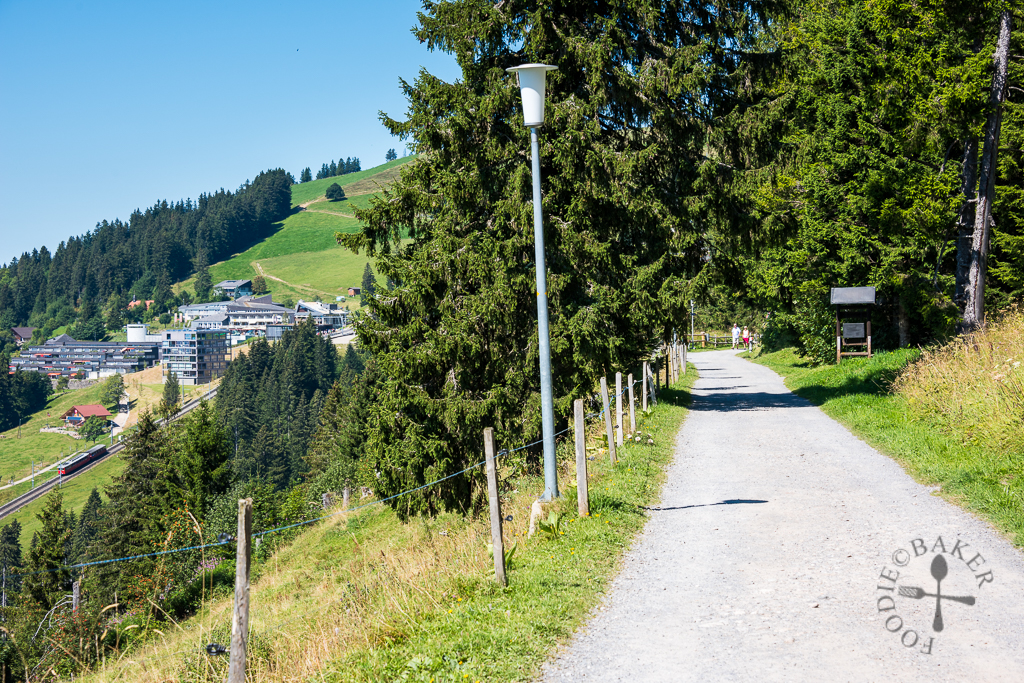 After grabbing an ice cream at Rigi Kaltbad, we started on the second part of the hike - Panorama. This trail follows the former railway line between Kaltbad and Rigi Scheidegg (1874 – 1931). In the summer it is a hiking trail but in winter, it is used for cross country skiing. The terrain is flat most of the way, so it's an extremely easy walk.

Back in the past, hotels were built high up on mountains (maybe because people like to hike up and stay there for days). So, to provide easier access for these hotel guests, the Rigi-Scheidegg railway was opened in 1874 and 1875 in two parts to provide a link to Rigi Kaltbad.

As Rigi-Scheidegg railway was built to follow the contours near the top of the mountain, a portion of the hike was along the cliff. This was my favourite part of the hike because it's more interesting, and the views there were so magnificent! Benches were built along this part of the hike so this place would have been a terrific lunch spot but unfortunately, all the seats were occupied when we walked past.

With the World War I in 1914, the tourist industry in Switzerland collapsed. As the tourist industry recovers, many travellers chose to visit Mount Rigi as a day trip (like us), resulting in a decrease in demand for the mountain hotels as well as the Rigi-Scheidegg railway. The railway finally closed in 1931 with the tracks removed in 1942.

Luckily for us, not all of the Rigi-Scheidegg railway has been destroyed. The railway bridge above is now a bridge for pedestrians, even though no tracks can be found there anymore. We also walked through an old railway tunnel a bit later. 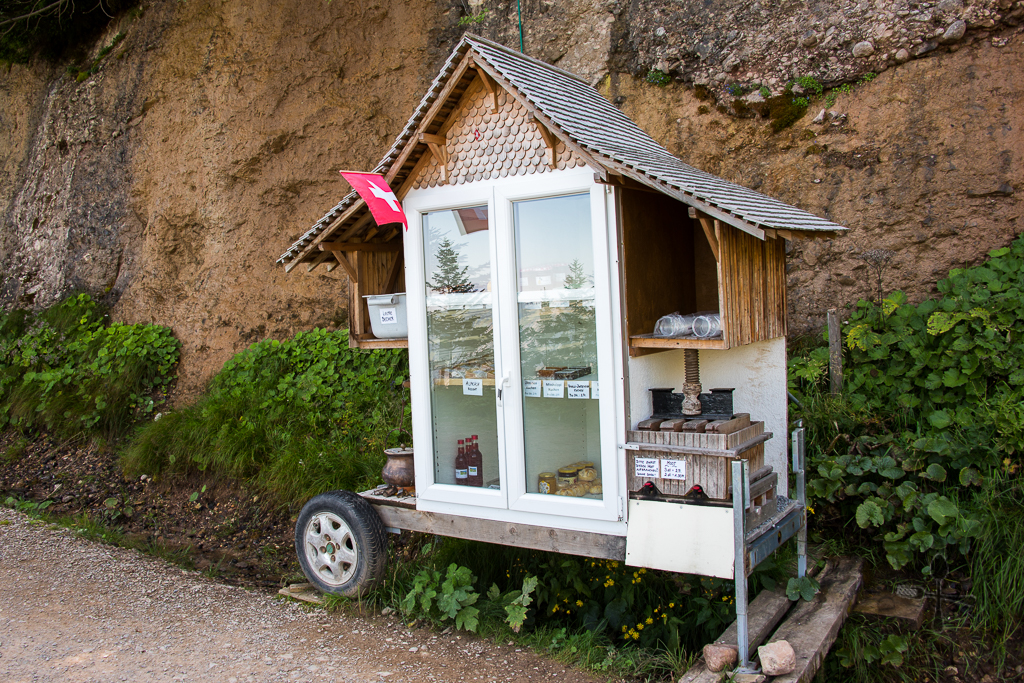 One interesting encounter we had towards the end of the hike was with this unmanned shop above! Juices, snacks, jams etc were sold in this little shop - you take whatever you want and put the money in the "cash register" which was just a box. It's an extremely interesting concept which is based on integrity and trust, which reminded us of something similar that we experienced in Ærø, Denmark! The shop was strategically situated next to a bench, so we purchased a large cup of apple juice and had a good break there before continuing our hike.

The last 30 to 35 minutes of the hike was an up-slope climb, but I found it pretty manageable albeit a little out-of-breath when we finally reached Rigi Scheidegg. We walked for another 10 minutes to reach the cable car station. From what I've researched, the cable car station will be closed from March 2017 to end of September due to the construction of a new cable car - perhaps to expand the passenger capacity. I remembered the cable car we took at that time down to Kräbel was small and packed with people. However I'm not sure what are the alternatives available to head down after the station is closed - perhaps closer to date there will be new information updated on the website.

We took the cable car down from Rigi Scheidegg to Kräbel - this was the only transport that we had to pay on Mount Rigi, but we were entitled to 50% off as we had the Swiss Travel Pass. From Kräbel, we took the blue train down to Arth-Goldau before changing to another train back to Lucerne (this was covered under the Swiss Travel Pass) for a good rest.

That's it for our day trip to Mount Rigi! Overall I really enjoyed the views at Mount Rigi, as well as the hikes we did. You can definitely go for more challenging hikes - such as the one from Weggis to Rigi Kulm, but don't worry, unlike Mark Twain who did it in 3 days, you only need 5 hours. 😉 It's definitely worth going, especially if you have the Swiss Travel Pass, because most of the transport up and down the mountain will be free.

(finally!) New travelogue is now up!