Here's the continuation of our 2-day trip at Zermatt! After a tiring hike the previous day, we went for a more relaxing pace the next day, and head up to the highest cable car station in Europe - Matterhorn Glacier Paradise.

Now that we had reached Matterhorn Glacier Paradise, it's time to explore the area!

The first area we walked past is the Cinema Lounge - a huge screen with cool-looking cocoon seats that can accommodate 16 people. Film clips featuring the alpine world, flora and fauna, freeride skiing and mountaineering are shown on the screen, which were a joy to watch. We almost didn't want to get out of the cocoons because the seats were heated! 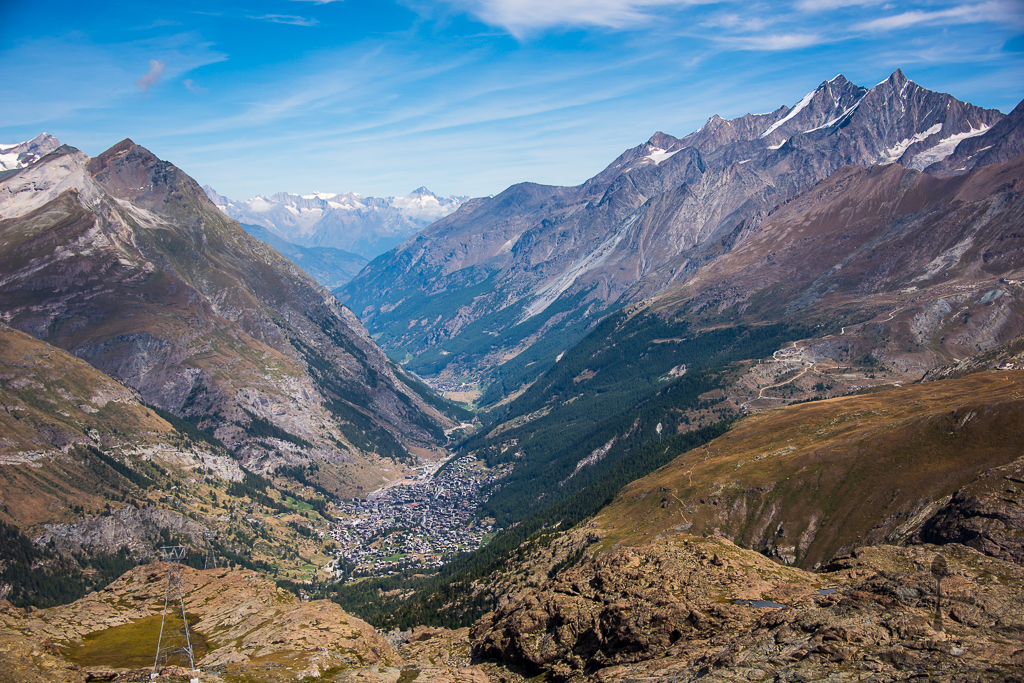 The viewing platform (accessed via the summit lift) was our next stop, which offered a superb panorama views of the area, including a shot of Zermatt town!

For those who love to climb mountains, it's possible to scale the Breithorn (4,164 MASL) from Matterhorn Glacier Paradise with mountain guides. This 2.5-hour climb will not be easy as it requires crampons, harnesses etc, but for hikers who want some adventure (and height), I think this would be an extremely rewarding experience (though I don't think I'll ever do it in my lifetime!)

We then head to the snow/ski area on Tehodul Glacier, which is open 365 days of the year. Even though it's summer, the quality of snow was really good - there were plenty of people skiing (and some learning how to ski), many others playing with snow and some trying out snow-tubing. Many national ski teams train here during summer (we shared the cable car with a few of them on our way down). We tried out the free snow-tubing which was incredibly fast, fun and dizzying, I couldn't really walk straight for a while after the ride 😆

After having so much fun outside, we went back in for more fun at the Glacier Palace, with plenty of interesting ice sculptures to take photos with, like a gigantic throne that we can sit in and even a life-size ice car like the one above! (This was a collaboration between Matterhorn Glacier Paradise and Audi at that time, not sure if the car is still there now though.) However, I must warn that it is freezing cold inside (even colder than outside because of the lack of sun)!

We grabbed a cup of coffee at the café to warm ourselves up then head down to the next place!

From Matterhorn Glacier Paradise, we took the cable car down to Schwarzsee, a lake which lies at the foot of Matterhorn, at 2,552 MASL.

Known as "Black Lake" in English, the surface of Schwarzsee is very dark in colour, which gives it a mirror-like quality that reflects the scenery perfectly.

Overwhelmed and a little tired from yesterday's hike, we only hiked around Schwarzsee, instead of embarking on a new long hike. I sat down near the lake and started having my sandwich lunch.

Interestingly, there is a small chapel next to the lake,which is dedicated to "Maria zum Schnee" ("Our lady of the Snows"). The chapel was apparently built in the early 18th century - according to legend, two people from Zermatt who lost their way in thick fog on the Theodul Glacier promised that if they were saved, they would build a chapel there. Today, the chapel is a popular and important place of pilgrimage.

How can I missed out our exploration of the most important village in this area - Zermatt? No matter which lake or mountain one is planning to visit, the starting point, more often than not, is always from Zermatt (1,620 MASL). Everything from eateries (restaurants, cafés, and bars) to lodging (affordable hostels and posh resorts) to shops are packed into this little village. Zermatt has a population of about 5,800, but during peak seasons, the population can swell to several times of that!

One thing I really love about Zermatt is that it's a car-free village. To prevent air pollution, almost all vehicles in Zermatt are electric vehicles, except for emergency vehicles. Access for private vehicles is allowed until Täsch, which is located 5 kilometres away. Travellers will have to change to a shuttle train in order to get into Zermatt. I love looking at these cute-looking vehicles whizzing through the town, carrying cargo or passengers.

Zermatt is a pretty small village, so everywhere is easily accessible on foot. We only took a public bus in the morning to reach Matterhorn Glacier Paradise valley station.

The Parish church of St Mauritius is an active church attended by locals and visitors from all over the world. The first church dates back to 1285 and it underwent several renovations to attain its current structure. Near the church there's also the mountaineers' cemetery, a tranquil site dedicated to all climbers who lost their lives while climbing the mountains around Zermatt.

A place that I found incredibly beautiful in Zermatt is the Old Village, which is a small section in Zermatt made up of 30 buildings constructed in the traditional style. We first stumbled upon the Inderbinen Fountain, which was dedicated to Ulrich Inderbinen. Ulrich Inderbinen was a Swiss mountain guide who had a passion for mountain climbing. He had been to the top of Matterhorn more than 370 times and his last ascent was made when he was 90! Besides his personal achievements, he was also famous for his abilities to guide visitors safely to the top. The fountain was built in 2000 to celebrate his 100th birthday (he died 4 years later) and the water was super refreshing, so do bring a bottle there!

Further up the slope from Inderbinen Fountain, we passed by several old houses that were constructed with stone slabs and wooden planks. There were barns, stables and a few traditional shops built for visitors to see, but unfortunately, none were open for visitors to enter. Nevertheless, it's an interesting stroll and a unique photo point!

Last but definitely not the least, if you don't plan to head up the mountains to see the sunrise and sunset, see them in Zermatt! The golden rays which shine on Matterhorn during sunrise and the colourful lights that lit up the sky during sunset create 2 stunning images. 😉

And that's it for our trip in Zermatt! I will be continuing on our trip to other parts in Switzerland, stay tuned!