Hello! We are now at Zermatt, Switzerland! At 1,600 metres above sea level (MASL), Zermatt is located at the foot of the magnificent mountain Matterhorn, while surrounded by many other alps. It was originally a farming village until the mid-19th century, when the first ascent of Matterhorn (at 4,478 MASL) was made. The ascent generated a furore in global media. Soon, visitors from all around the world started to flock to Zermatt, prompting its development into a tourist resort today.

We reached Zermatt in the evening and after a home-cooked dinner of beer mussels and creamy ravioli, we head to bed early to prepare ourselves for a long hike the next day.

One of the best photogenic angles to view the Matterhorn is from Rothorn, so the next morning, we walked to Sunnegga-Rothorn valley station to take the funicular and cable cars up to Rothorn. The funicular ride was only a short 4 ½ minutes and it brought us up to Sunnegga, 2,288 MASL.

We then changed to a gondola lift up to Blauherd, then another big cable car to reach the summit of Rothorn, Unterrothorn.

At 3,103 MASL, the summit of Rothorn, Unterrothorn, is a popular attraction throughout the year. In summer, it grants a splendid panoramic views of the alps, including the majestic Matterhorn. It is also the starting the point for hikes and activities like paragliding and sunrise watching (a special ticket needs to be purchased). During winter, it is the starting point to the ski pistes. There is also a permanent art exhibition, The Peak Collection, which showcases 18 metal sculptures made by Zermatt mountain guides around the Restaurant Rothorn.

It was really cold when we reached the top, so we went into Rothorn Restaurant for a coffee to warm ourselves up first before heading back out again to take in the views. The combination of the clouds, the snow, the blue sky, the alps and the glacier creates a truly magnificent view that blown us away.

Matterhorn, at 4,478 MASL and its natural, almost pyramid-shape peak, is one of the highest summits and one of the most photographed mountains in the world. It's also a symbol that we see on the delicious chocolate brand - the Toblerone! I will share more on Matterhorn in the next post when I blogged about Matterhorn Glacier Paradise! 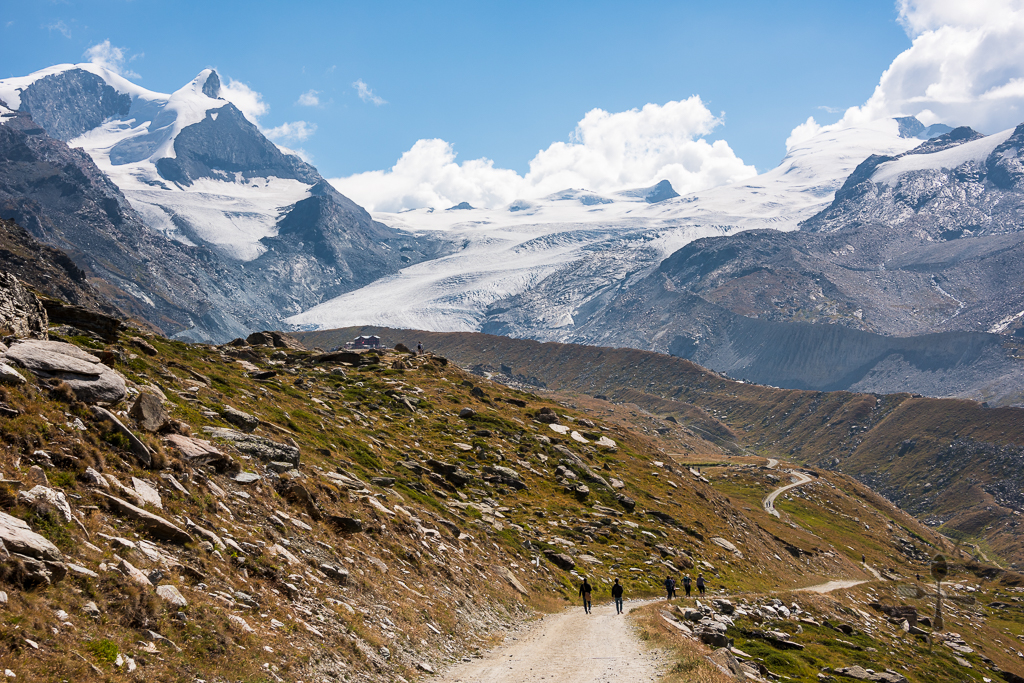 In the area around Zermatt there are a total of 400 kilometres of marked hiking trails to explore and one of the most popular ones is the 5-Seenweg, also known as 5-Lake Hike.

We started our hike at Blauherd station, which is a stop down from Rothorn. At the station, we spotted a flock of blacknosed sheep - I really think they should be renamed as "blackface sheep" instead because their face is so black that it's hard to tell where are their eyes! They were extremely adorable and unlike Icelandic sheep which would run away from people, these blacknosed sheep were pretty friendly, curious and would approach us!

After a few shots of the blacknosed sheep, we followed the signs to the first lake, Stellisee. The hike was a slight descent so it was a very comfortable and easy walk, which took us about 20 minutes to reach from Blauherd station.

Stellisee (2,537 MASL) is perhaps the most famous lake in Zermatt because on calm and cloudless days, the Matterhorn is reflected on the lake surface, creating a natural masterpiece. Unfortunately for us, the weather wasn't calm (so no reflection) and the clouds covered the Matterhorn. Even after an hour of waiting, the clouds simply refused to budge from Matterhorn, hence we gave up waiting and head to the second lake.

The second lake, Grindjisee, sits at 2,324 MASL, so it was a descent all the way down to reach it. When we were there, there were 2 paths leading to the lake - one for hikers and one for vehicles (and humans of course). The vehicle path was for heavy vehicles carrying construction materials (for the construction of a new 6-seater ski lift), and will most likely be longer but gentler in the descent. The hiker path that we took was quite steep, but luckily we were walking down-slope so it's a lot easier for me.

The signage to Grindjisee was a bit poor at the time we were there, but as we hiked down, we saw a glimpse of a beautiful lake and we simply hiked in that direction. It took us about 1 hour to hike down from Stellisee to Grindjisee.

Grindjisee is my favourite lake among all the 5 lakes - sitting in the midst of trees and moorland flora, and with the alps as the backdrop - the view was simply stunning. Apparently there were many rare plants growing around the lake, and many botanists love coming to this lake to study these flowers.

After a quick rest at Grindjisee, we continued onto the 3rd lake. This time round we took the vehicle path - which I didn't really like because of the lack of flora and fauna, and the fact that the vehicles kicked up a tremendous amount of dust everytime they passed by.

The path was a gentle descent so it's incredibly easy to walk on. We then crossed a bridge and continued followed the signage to reach the 3rd lake.

The Grünsee (2,300 MASL) is another beautiful lake fed by surrounding mountain springs. The word "grün" means "green", and while it doesn't look green in the photo above because of the lighting, take a look at the photo below! Swimming is allowed (no changing facilities though) and we saw quite a few people dipping into the lake. We took the chance to sit on one of the huge rocks to have another sandwich.

There were 2 routes leading to the next lake, one for vehicles, and the other for hikers. We chose the hikers' path to escape from all the vehicles.

The Moosjiesee (2,140 MASL) is not a lake, but an artificial reservoir. It contains glacier water from Findel Glacier, hence the milky and turquoise colour. The water is used to generate electricity and for snow-making along the pistes.

After a few photos of the Moojiesee, it's time to head to the last lake! The last lake, Leisee, is located at 2,232 MASL, meaning an ascent is needed. There were 2 hikers' paths up to Leisee and we took a shorter one - which involved a 10-minute steep incline followed by a 25-minute gentle ascent up to Leisee.

Leisee is quite crowded, due to the ease of access as it's located just below Sunnegga (do you still remember we took the funicular up to Sunnegga earlier?) To make things even easier, there's even a Leisee Shuttle that brings visitors from Sunnegga down to Leisee free of charge (if you choose to walk, it takes about 10 minutes). There are a number of facilities built there - a children's playground, barbeque areas, pavilions and a play raft on the lake. It's also possible to swim in the lake too. During winter, beginners can ski/slide on the snow here.

And that's it for today's travelogue! We head back to Zermatt to walk around, but I'll share that in our next post, stay tuned!