It was only about 8+ in the morning when we reached Grindelwald but being the second largest village after Interlaken, it was already bustling with people and vehicles! Grindelwald boasts more than 300 kilometres of walking trails during summer and in winter, it is the largest ski resort in Jungfrau region.

We made our way to First Aerial Cableway valley station by bus, located just 2 bus stops away (if you choose to walk, it will be about 10 minutes.) The cableway has individual cabins and is constantly running, which is nice because we got to sit down, relax and enjoy the views. However, the weather was unfortunately cloudy in the morning so we couldn't see much.

There are 3 stops along the cableway and it took about 1 hour before we reached the last stop, First. In case you are curious, the other 2 stops are called Bort and Schreckfeld, not "Second" or "Third"!

First (pronounced as "Fierst") is the name of a minor summit in the Jungfrau region, the name of the final cable car station above Grindelwald and also a popular hiking area. Our original plan was to hike to Bachalpsee (a lake), then onto Faulhorn (a summit 2,681 MASL), but the cloudy weather deterred us from starting the hike because there's no point hiking if we couldn't see the views! Hence we decided to take things slow and have a coffee first at First Mountain Restaurant.

But even after an hour of waiting, there was no inclination of the sky clearing up, so we gave up waiting and started our hike towards Bachalpsee. 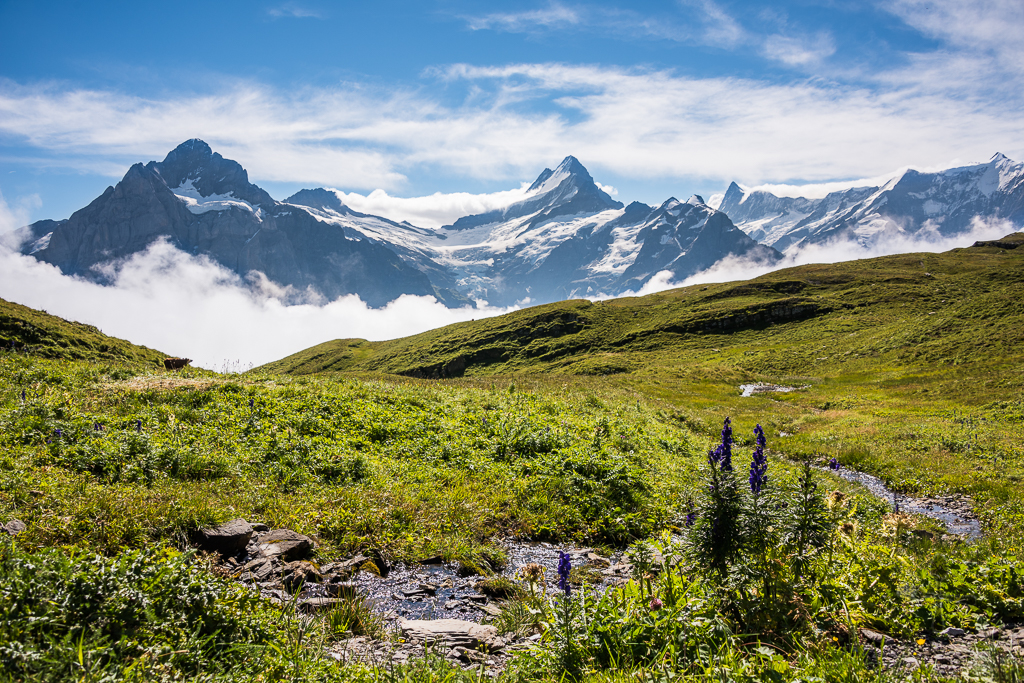 The start of the hike is a slightly intense ascent but soon gave way to a flat and easy walk. We were hiking with many other travellers so it's impossible to get lost. We were about 20 minutes into the hike and suddenly the clouds gave way to sunny blue skies! It was such a beautiful surprise and the weather just kept getting better and better as we near Bachalpsee.

Bachalpsee is a beautiful mountain lake located at 2,265 MASL is split into 2 by a natural dam. On windless days, it's possible to see clear reflection of the alps in the lake, but unfortunately the lake just won't calm for us to take a shot.

Most of the travellers were picnic-ing at the lower lake, while the upper lake was "occupied" by the cows.

After finishing our lunch at Bachalpsee, we turned back and hike back to First. Our original plan was to hike to Schynige Platte, which would require an additional 5 to 6 hours. We forego the hike in the end as we started our hike late and we might miss the last train down from Schynige Platte.

Grindelwald is known as the Top of Adventure because besides hiking, there are other exciting activities that travellers can do there. The first activity would be the First Cliff Walk by Tissot. Opened in September 2015 with an investment of CHF 1.5 million dollars, this thrilling experience was constructed in partnership with Tissot.

We actually walked through the bridge once before we started our hike to Bachalpsee, but the views were totally obscured by the clouds. Since the weather was better, of course we walked through it again!

The First Cliff Walk is opened all year round and it's free - you just have to get up here to First.

Besides the First Cliff Walk, there are 3 other activities that travellers can do that will bring them down from First to Grindelwald - First Flyer, Mountain Cart and Trottibike Scooter.

First Flyer is a 800-metre long thrilling zipline that can speed up to 84 kilometres per hour. The starting point is located right next to the cableway station and we spotted a long queue when we were heading back down to Grindelwald! It will end at Schreckfeld where travellers can switch to the second activity, the Mountain Cart. (Do note the weight restrictions: minimum 35-kg, maximum 125-kg.)

The Mountain Cart is a mix of go-kart and sledge down from Schreckfeld to Bort. The track is three kilometres long and you can adjust how fast you want the cart to go with the brakes. Do note that children need to be at least 1.35 metres tall to take the ride.

At Bort, the Trottibike Scooter enables travellers to wind through the trail past farms and meadows down to Grindelwald. Trottibike scooters are a fusion between bicycles and scooters - the handles and wheels are from a bicycle but instead of sitting down, one will need to stand on a scooter-like platform.

Completed in 1892, the Schynige Platte Railway was an impressive feat as it was completed in just 2 short summers. The train ride brings visitors up over 7 kilometres of railway track, 67 bends and through 4 tunnels to reach up to a plateau at 1,967 MASL. The train ride is really long at 50 minutes one-way, and the last train departs quite early, so do factor these into your planning.

After the Schynige Platte Railway was completed, the small mountain inn, Alpenrose, which was built there long ago was not able to cope with the increase in travellers. Hence the new Hotel Schynige Platte was built and opened in 1894. After it was burned down in 1898 (just a mere short 4 years), a larger hotel was built in its place. There's a really nice outdoor terrace which would have been crowded with travellers if the views were nice that day!

We hiked around the Schynige Platte a bit while waiting for the next train. It was truly unfortunate that the clouds blocked almost everything but we had to come up as it was our last day in the Jungfrau region. Before heading up, it's essential to check the live cam so you don't waste a trip there!

Remember the above photo? We were at Harder Kulm the previous day and it was so terribly cloudy that we couldn't see anything. When we reached back down to Interlaken from Schynige Platte, we noticed that the clouds were clearing up so we decided to give Harder Kulm a shot again. Thankfully the views were many times better than the previous day, which was a splendid end to our experience in the Jungfrau region.

For more details of Harder Kulm, check out the previous travelogue here!

We explored Interlaken for the rest of the evening - like Grindelwald, it was an extremely busy and lively town. There are plenty of restaurants (it's so hard to decide on one for dinner!), shopping and even a casino! 😯 We had dinner there before heading back early for a good night's rest. And this is the end of our trip to the Jungfrau region! We are heading to another alp for the next travelogue, and it's now up!