Hello! Today I'm sharing our second day at the Jungfrau region! We left our accommodation a bit late at around 9 in the morning after a tiring day of hiking the previous day. We took the train back down from Wengen to Lauterbrunnen and start off the day with an easy hike!

Just after a 10-minute walk, we reached the first sightseeing point of the trail - the Staubbach Falls. Staubbach Falls is the second highest waterfall in Switzerland at almost 300 metres. "Staub" means "dust" - as the wind passes through the valley, it causes the waterfall to spray in all directions, hence giving the waterfall its name. It's possible to hike up close to the waterfall but it looks prettier from far.

We followed the signs to Stechelberg and continued on the trail - even though the trail is called the Nordic Walking Trail, it is more like a pleasant walk through Lauterbrunnen valley, while enjoying the mountain views and the vast meadows. Alas, the cloudy weather prevented us from seeing the mountains that lay far ahead.

The terrain is mostly paved with asphalt with very minimum ascent or descent, making it suitable for a cycling trip too. It's possible to do a detour to Trümmelbach Falls, a glacial waterfall that carries up to 20,000 liters of water per second. It will take an additional hour to do the detour.

Here's a piece of warning: if you ever see someone driving a small tractor that is pulling a cylindrical container into the meadow next to you (looks something like this) - run for your lives! It's actually a manure spreader! We actually stopped and watched what the local was doing, and when he started spraying the manure onto the grass... the smell gagged us as we hurriedly walked away - I think we had never hiked so fast before! The smell was just... yuck!

After about 2 hours of hiking, we reached a picnic area with tables and benches, which were all occupied by families on holiday in the Jungfrau region. We crossed a small bridge and arrived at Stechelberg cable car station. To get to Mürren, we need to change to another cable car at Gimmelwald (like a connecting train). We wanted to explore Gimmelwald a bit, so we missed the connecting cable car to Mürren. (Note: You'll need to pay to bring the bike up.)

There's actually not much there, just a small playground, accommodation and a restaurant next to the Gimmelwald station. As the next cable car would only arrive 30 minutes later, we found a bench and sat down for lunch.

Mürren is a traditional mountain village at an elevation of 1,650 metres above sea level (MASL), making it the highest permanently-inhabited village settlement in the canton of Bern. It is a no-car village, so it can only be reached via train or cable car.

Mürren is an extremely quaint and pretty village - the houses are so pretty! There's not many people in the village so we had a very nice, quiet stroll. We passed by quite a number of restaurants and cafés but we wanted to keep costs low so we didn't stop for a meal/coffee.

There's not much to do at Mürren for us, so we decided to head to Interlaken. We didn't want to go via the same route we came from, so we walked to Mürren train station and took a train down to Grütschalp. On the way, we stopped by Winteregg to explore.

If you choose to hike from Grütschalp to Mürren (or the other way round), the Winteregg Restaurant, which is situated right in the middle of the trail, will be a really nice pit-stop. It is also kids-friendly as it has a mini playground for kids to run about. 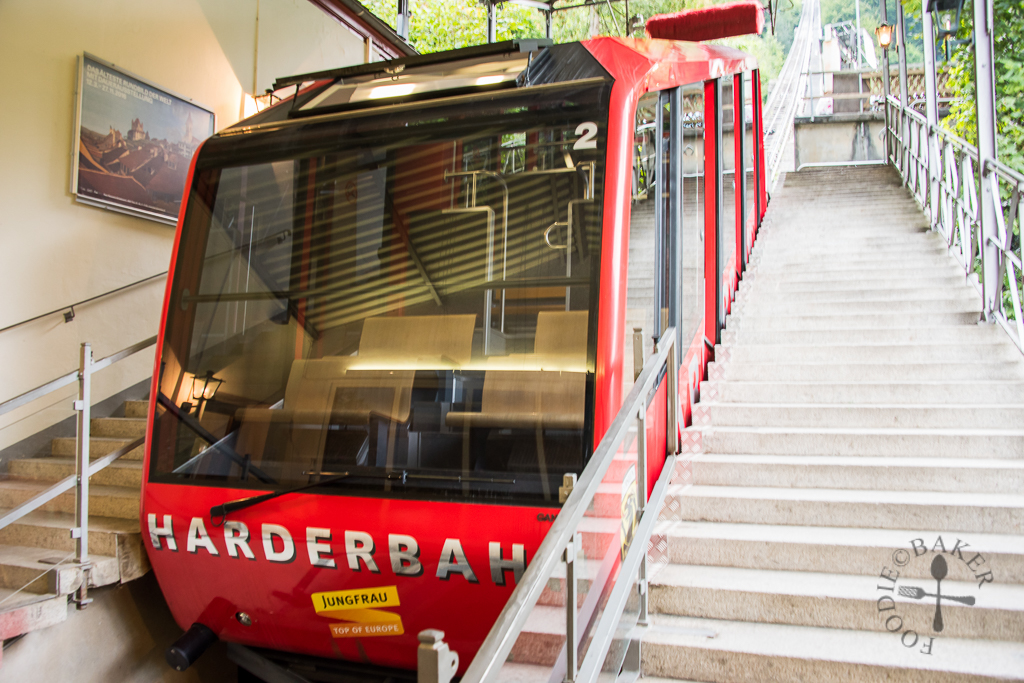 After reaching Grütschalp, we took a cable car down to Lauterbrunnen then changed to a train down to Interlaken Ost. From Interlaken Ost, we walked for about 5 to reach Harderbahn (Harder Railway), cutting through a small park and crossing a bridge. Cars have access to the bridge too, so do watch out!

The Harder Railway is a funicular constructed from 1905 to 1908. It has a length of 1,435 metres and climb up to Harder Kulm at 1,322 MASL in just 10 minutes. If possible, sit facing down so you can watch the beautiful views of Interlaken unfold before you.

When we reached Harder Kulm, it started drizzling so we decided to take a break at Harder Kulm Panorama Restaurant. We had some drinks and tried the Swiss cheese fondue, and to be honest, Swiss cheese fondue is not my kind of thing. The taste was alright, but we only had potatoes and bread to dip the cheese into, which got quite boring after a while.

It finally stopped drizzling after our meal, so we head to the viewing platform right next to the restaurant for a look. And... there's not much view because the clouds/fog obscured almost everything. This is why it is essential to stay more than a day at the Jungfrau region and to check the live cam before heading up a viewpoint!

Well, as most of you should know by now, my kind of shopping is actually in supermarkets 😆 Switzerland supermarkets are clean, neat and extremely eye-appealing (to me at least haha). This is a hyper-supermarket in Interlaken Ost so it stocked a lot more stuff than other smaller supermarkets. These are the sections that we usually frequent in the supermarket.

We noticed that supermarkets at touristy places (not this one at Interlaken Ost, but others) offer more "touristy products" or rather, more tourist-friendly by small-portioned products. We had seen small bottles and packages of salad dressings and vegetables, fresh pasta/ravioli/gnocchi for 2 pax (I absolutely love these), half a loaf of bread etc. Of course they are not as value-for-money, but it's better than buying a full-size product and waste half of it, no?

What I love about Switzerland supermarkets is that there's always a section dedicated to chocolates and chocolates only. We didn't really buy and try them, but they were simply soothing to the eyes 😆

We head back to our accommodation after shopping at the supermarket and didn't eat dinner as we were still stuffed from the cheese fondue. We prayed for good weather the next day and rested early!