Here is the last day of our Naples trip! We left Amalfi really early - taking the 6.20a.m. Sitabus to Sorrento (bus tickets were purchased the day before) then changed to a 8.26a.m. train back to Naples. We reached back Naples at around 9.30a.m. and after leaving our bags in the hostel, we still have slightly more than half a day to explore Naples.

As the restaurant we want to visit was not yet open, we decided to walk around the city center first. The city center is not very huge, so it can be easily covered on foot. So we wandered around and stumbled onto a local market (one of my favourite places to visit whenever I'm overseas). 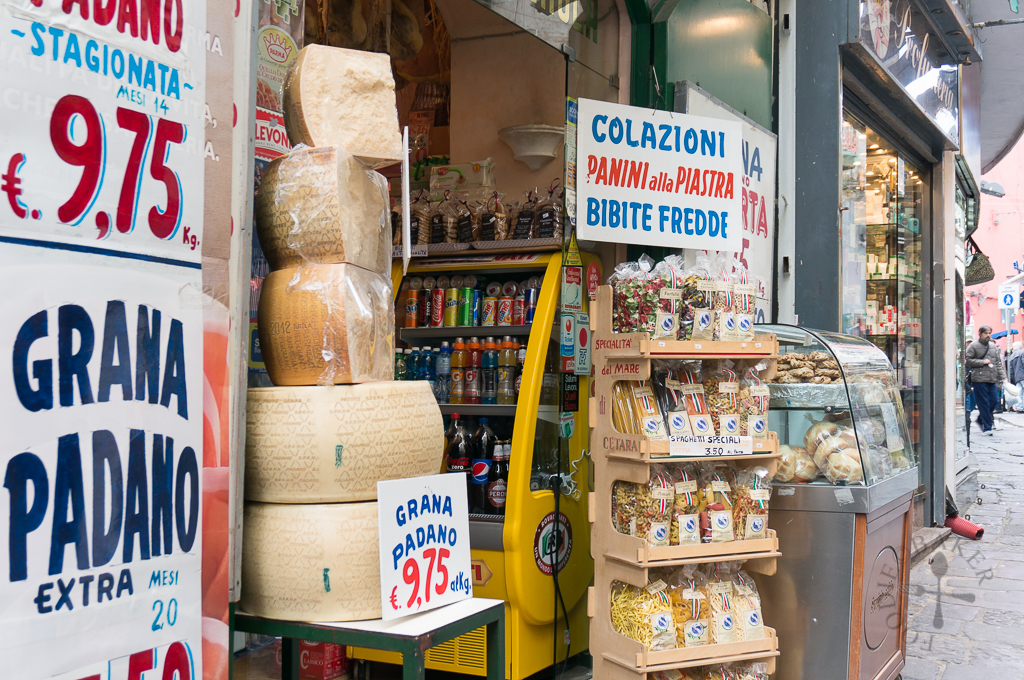 Grana Padano is a hard and slow-ripened cheese that is comparable to the Parmigiano Reggiano. There are many shops selling the cheese, and they also sell a wide variety of pasta and mixed herbs. 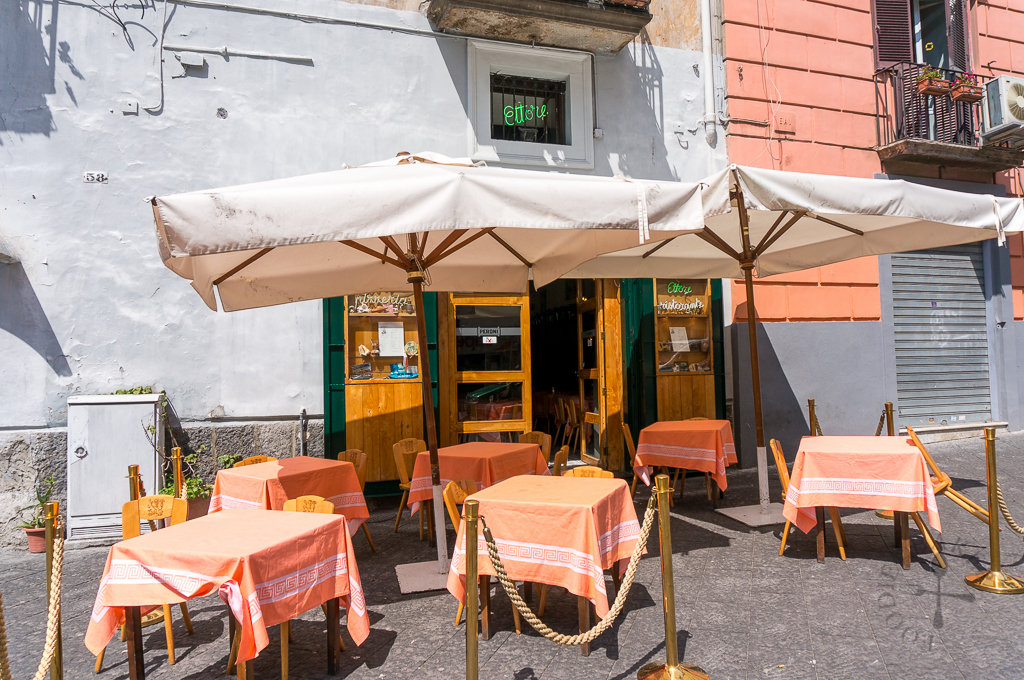 We slowly made our way to Da Ettore, a restaurant located on Via Santa Lucia. Despite the cold, I insisted on sitting outside because I knew I would feel awkward taking food photos inside the restaurant as we were the only diners in the whole restaurant.

Our food came swiftly - the grilled squid was a little bit pricey, but it's simple, unpretentious, fresh, succulent and grilled to perfection. The salad underneath paled in comparison, wish it'd be a bit more fancy.

As for the bolognese, I have no idea what magic they used, but every bite of the pasta was so flavourful and delicious! The sauce clings onto the pasta really well, something that I'm still trying to achieve when I make bolognese.

As Da Ettore is located very near the coast and other attractions, we took a stroll along the coast to walk off the full stomach.

Do you know that Mt Vesuvius is still an active volcano? Despite its tendency towards explosive eruptions, it is the most densely populated volcanic region in the world, with about 3 million people living there.

Castel dell'Ovo (Egg Castle) is the oldest standing fortification in Naples. Its name comes from a legend whereby the Roman poet Virgil, reputedly a great sorcerer, put a magical egg into the foundations to support the fortifications. This magical egg will ensure the safety of the castle as well as the city of Naples. Of course, the egg was never found. There is no entrance fee to the castle, so we happily went into the castle to catch a view of Naples city and Mt. Vesuvius (but there's another place that's even better, read on to find out where!)

Via Partenope provides a stark contrast to the historic center of Naples with its exclusive hotels and many restaurants (that look a tad too touristy to me). It's a beautiful street to stroll along and to take photos!

Castel Nuovo, also known as Maschio Angioino, was built in 1279 by Charles of Anjou. Due to its strategic position, the castle served as a royal residence as well as a fortress. Today, it houses the Municipal Museum (which we didn't go) and is a venue for cultural events.

We next head to Piazza Fuga to take the funicular, an inclined cable railway, to Augusteo, to catch the evening sun shining down on Naples city. The above view was taken near Castel Sant'Elmo, a medieval fortress located on the hilltop. We didn't go into the castle as there is an admission fee and our main purpose was actually the view above.

From Castel Sant'Elmo, we took the long and winding steps down towards Spaccanapoli, a straight and narrow main street that runs through the historic center of Naples. The best place to view that street is from above but in order to take a good shot of it, it's good to use a zoom lens as the places we took the photos from are quite faraway.

Here is the place to take a photo of the Spaccanapoli (I've also added in all the eateries that we've tried in Naples!): 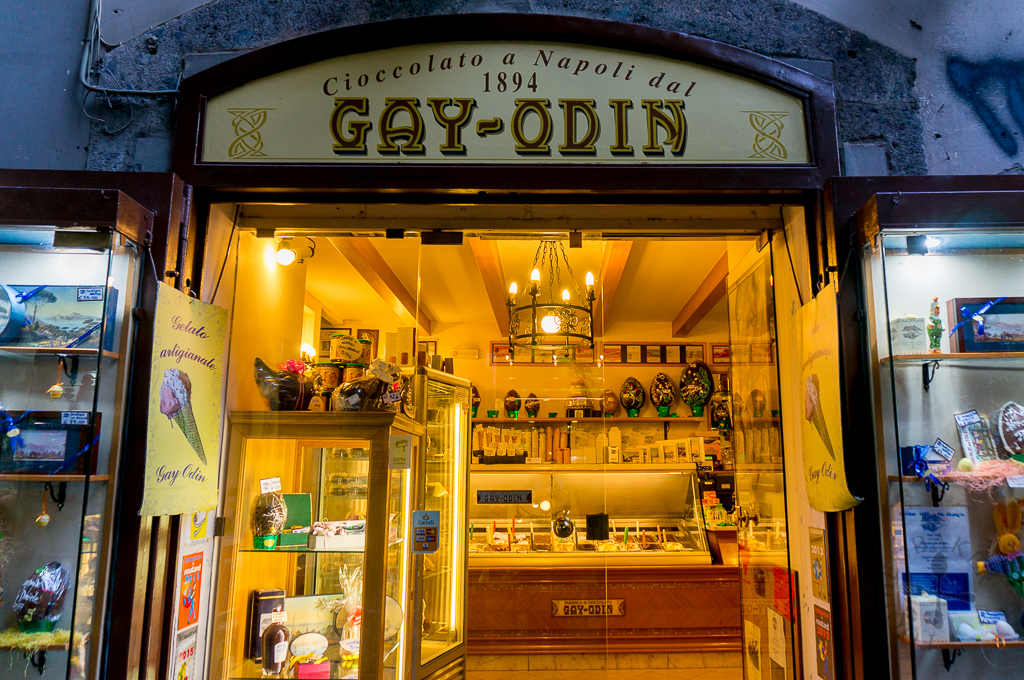 While walking back to look for dinner, we stumbled upon Gay Odin, a gelato and chocolate shop that is opened in 1894. It was one of the food places that I had bookmarked on the map but totally forgot about it - luckily we managed to pass by it on our way back! And since it was the last day of our trip, of course we have to buy something inside!

Gay-Odin is also very famous for their chocolate truffles but as we are not a huge fan of truffles, we didn't buy any back.

And where's dinner, you ask? We bought a 6-flavoured pizza - whereby the pizza was divided into 6 sections, with each section filled with a type of filling (we had no idea it's gonna be like this) - and it was the worst pizza we had ever had in Naples. So of course I'm not going to blog about it here. Lesson learnt: just stick to the classics!

And that's all for Naples and Amalfi Coast! I've also published the itinerary and budget for the trip, so you can check out how much we spent!

And here's a sneak peak of our upcoming travelogue: 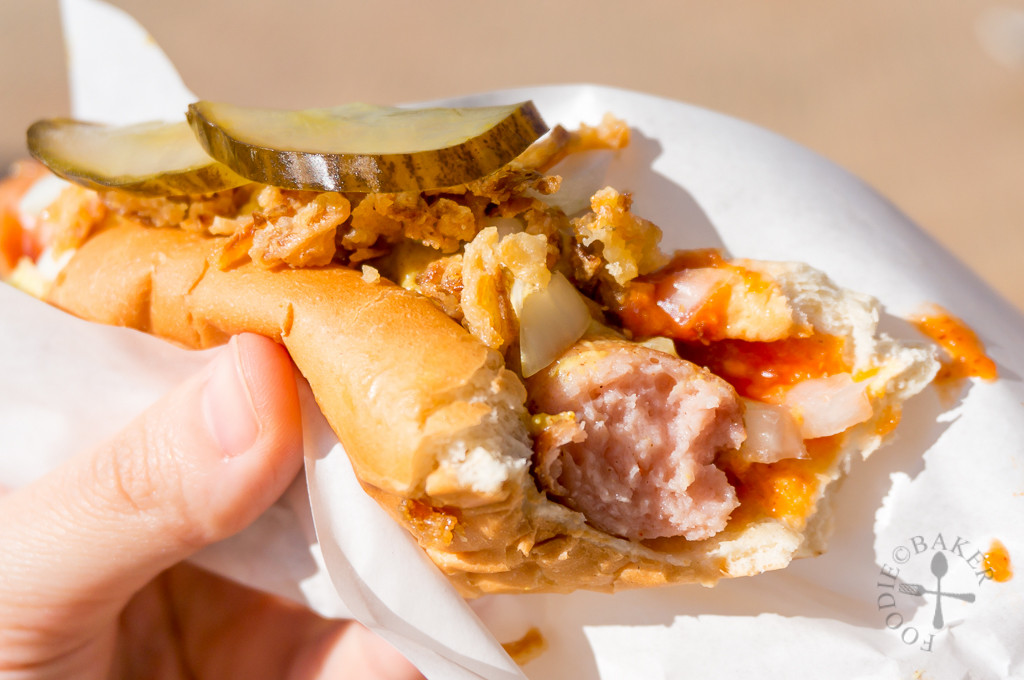