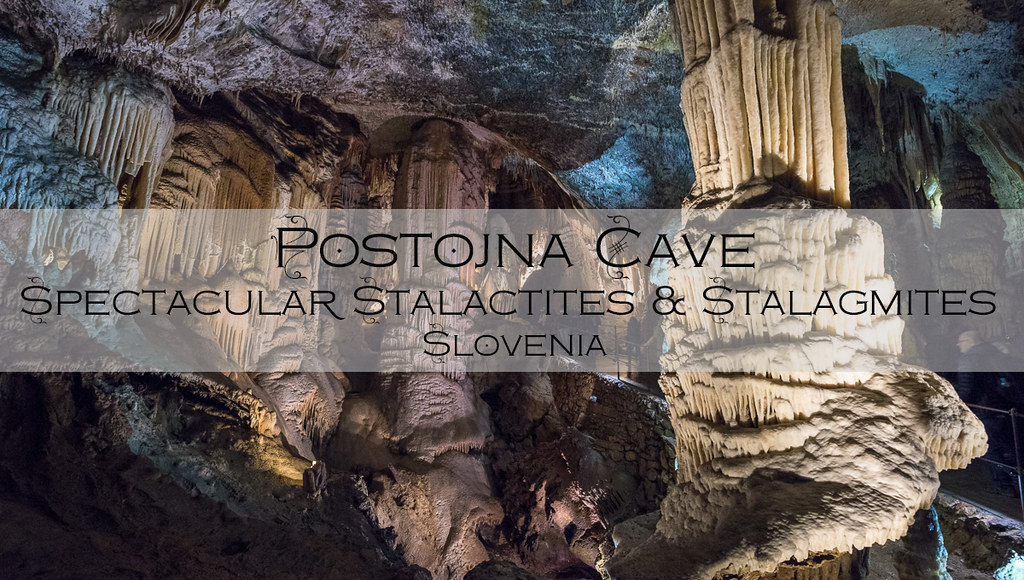 A Brief on Postojna Cave

Postojna Cave is a well-known cave in Europe and the largest of the Classical Karst. Carved by the Pivka River, the cave is 24 kilometres long with numerous underground passages, galleries and halls. It was not known when the cave was first officially discovered but records had shown that the first visitors to the cave dated back to more than 800 years ago. Modern age tourism was developed in 1818, after a large inner area of Postojna Cave was discovered by Luka Čeč, a local of Postojna. The cave was officially opened to public by Archduke Ferdinand I in 17 August 1819, and since then, the cave has welcomed more than 35 million visitors to the cave. Here is our guide and experience (with many photos!) to this spectacular wonder!

Getting to Postojna by Car, Motorhome and Caravans

Postojna Cave can be easily reached by private transport and the car park is located at these coordinates: 45.781174, 14.203359 (the parking lot of motorhomes and caravans is next to the car park for cars). It's easy to get there with directions provided by Google Maps - to save on data, use Google Map to download the offline map of Slovenia when you have access to WiFi. If you need a SIM card, you can consider getting the Visitor Sim offered by Si.mobil, which provides 15 days of 10GB internet access at 15€.

Getting to Postojna by Public Transport

Due to its overwhelming popularity, it's a lot easier to reach Postojna Cave by public transport as compared to Škocjan Caves Park.

Postojnska Jama (Postojna Cave Bus Stop): In 2015, a new bus stop, Postojnska Jama, has been established right at Postojna Cave, making it a lot more easier for travellers to reach the cave without having to walk from Postojna Town. Arriva Company provides bus services to Postojnska Jama on its Ljubljana-Koper-Piran and Ljubljana-Nova Gorica lines. The overall timetable for both lines can be found here - but as the timetable is dated 2015, it's best to check the actual bus timing using the website's search function. Another company, Autotrans, provides bus services to Postojnska Jama from Rijeka - search for bus timings and pricings here. 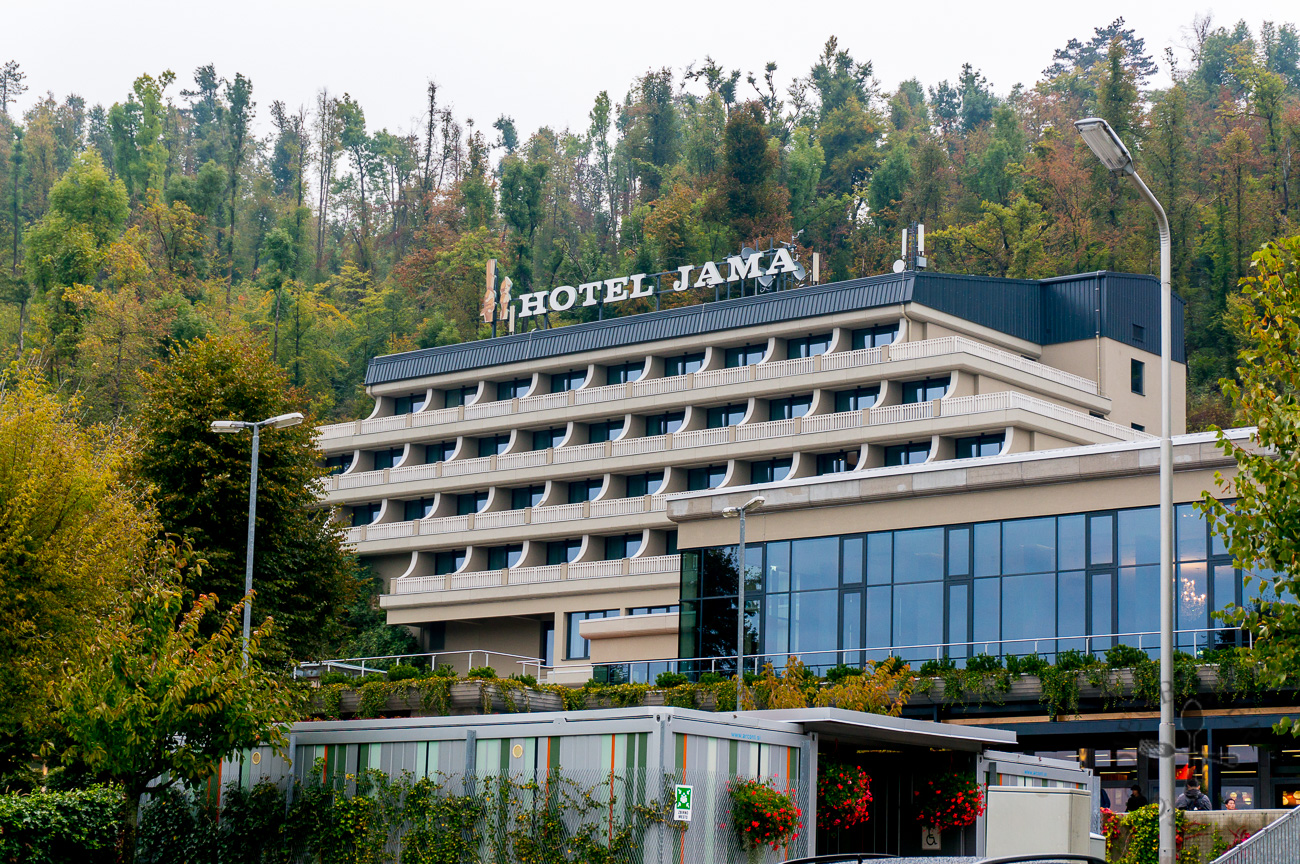 As Postojna Cave is an extremely popular tourist destination (crowded is an understatement to describe the number of visitors there!), visiting the cave at the earliest tour timing is perhaps the best way to beat the crowd. Hence, staying a night at Postojna town or at Postojna Cave will definitely help to start the day earlier. There are hotel and hostel options at Postojna town, but Hotel Jama is the closest and most convenient because it's located within the park's premises. Opened in 1971, Hotel Jama underwent a renovation in 2016 and today it offers eighty modern rooms and suites with a restaurant and a café. Unfortunately, we didn't get to stay a night there, but we had a peek at two of their hotel rooms:

Our Experience at Postojna Cave!

After getting our tickets, we queued up at the entrance, where there are four queues for different languages - Slovene, English, German and Italian. If you don't speak any of the above languages, you can rent an audio guide at €3 each, which comes in 17 languages. After queuing for a short while, we were ushered onto... a train - yes, a train! Only 5.2 kilometres out of 24 kilometres of the cave is opened for tourists, but instead of walking by foot for the whole of 5.2 kilometres, about 3.7 kilometres are covered by train. The railway tracks were laid in 1872, allowing visitors to ride in two-seater carriages which were manually pushed by the cave guides. In 1924, the railway system was overhauled and gasoline-powered locomotives were used to transport the visitors, which were replaced with battery-powered ones in 1957.

The electric train passes through artificial (built when a double track railway was constructed in 1964 to accommodate increasing visitors) and natural tunnels, before emerging into a hall of stalactites and stalagmites. It was a jaw-dropping sight seeing the stalactites and stalagmites - don't bother taking any photos during this period (there are plenty of photo opportunities later on), just take in the views! 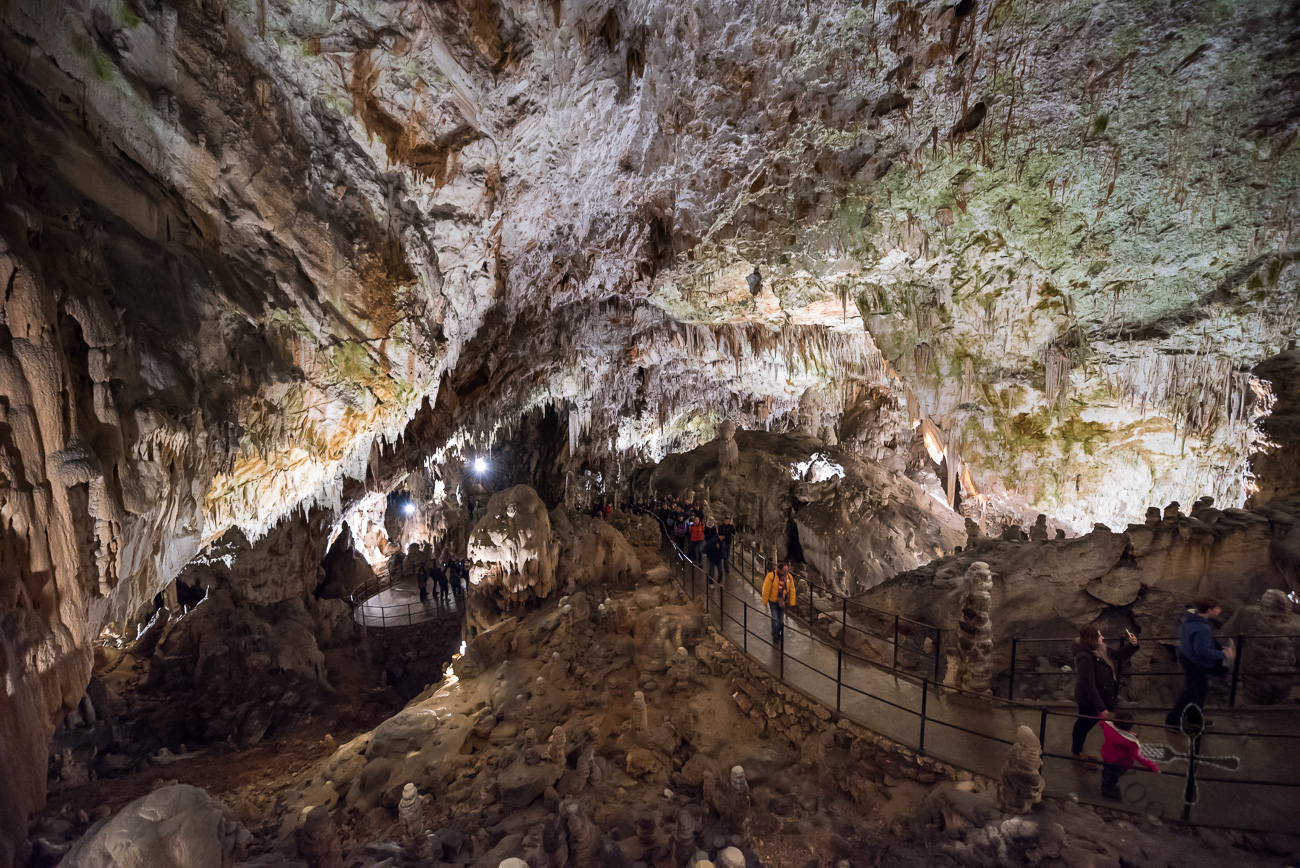 After the short train ride, we alighted and followed our guide to continue the visit on foot for the remaining 1.5 kilometres - there is a bit of upslope climbing at the start, but after that the path is relatively flat. 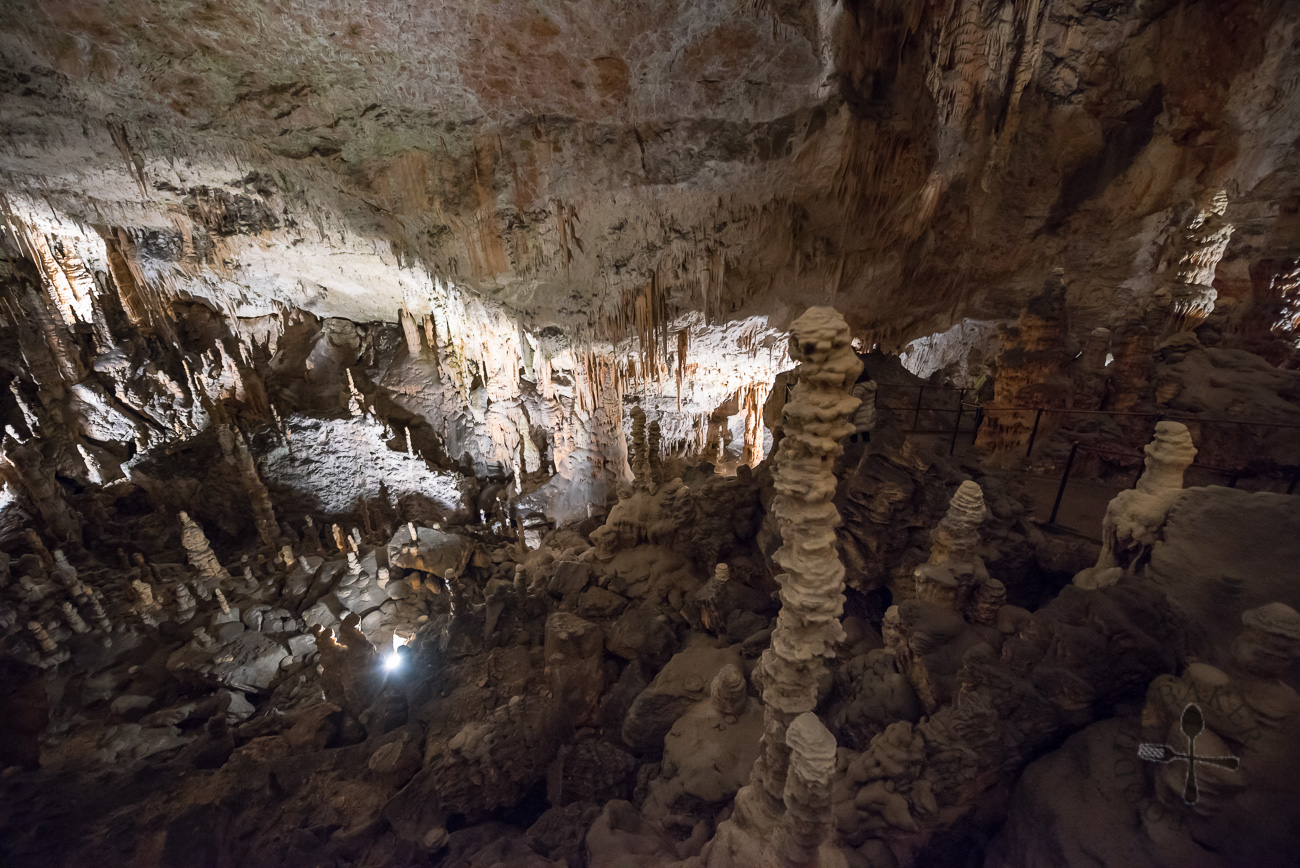 Microphones are installed along the tourist trail and the guide uses them to explain details of the cave. Thanks to these microphones, we were able to hear the guide even though we were at the back of the tour group. 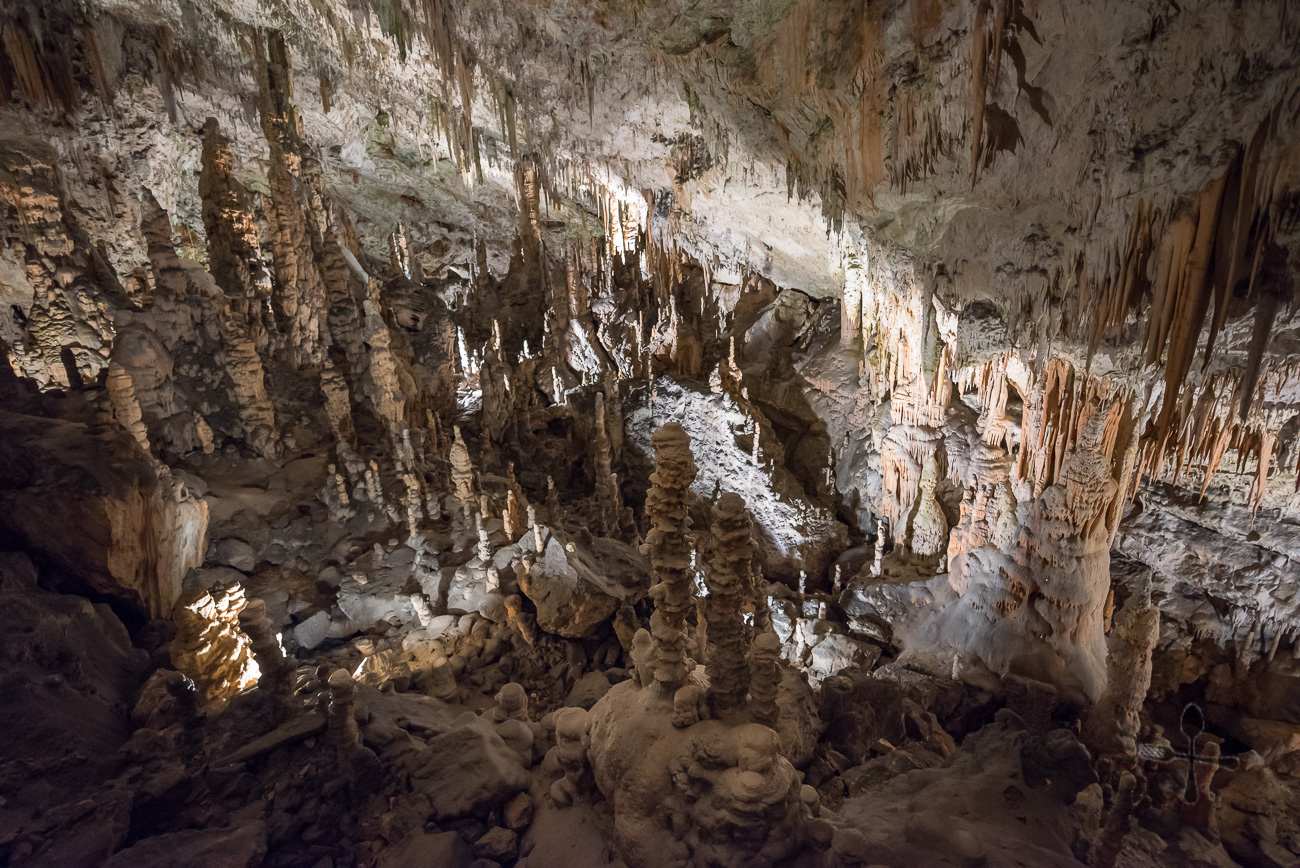 The tourist trail has been divided into different "rooms" - such as the Great Mountain, Beautiful Caves, Spaghetti, White and Red Halls and Brilliant Passage. All of them feature stalactites and stalagmites, and in case you have forgotten - stalactite hangs from the ceiling while stalagmite grows from the floor. They grow at an average rate of 1 centimetre every 100 years, so you can imagine how long it took for all of these to grow to such massive pieces. 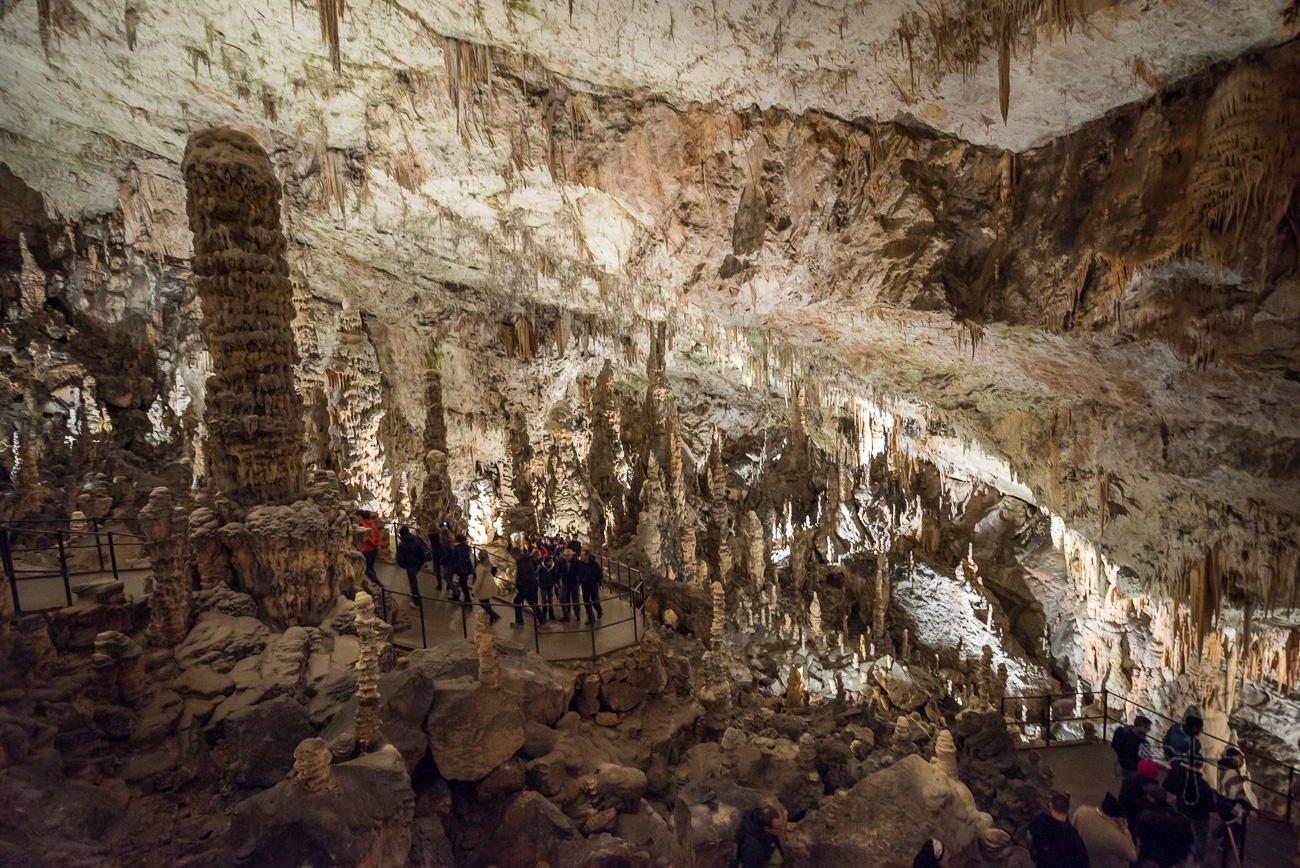 When a stalactite and stalagmite joins together, it is known as a pillar or a column. In Postojna Cave, there are many interesting pillars in various colours, shapes and sizes. 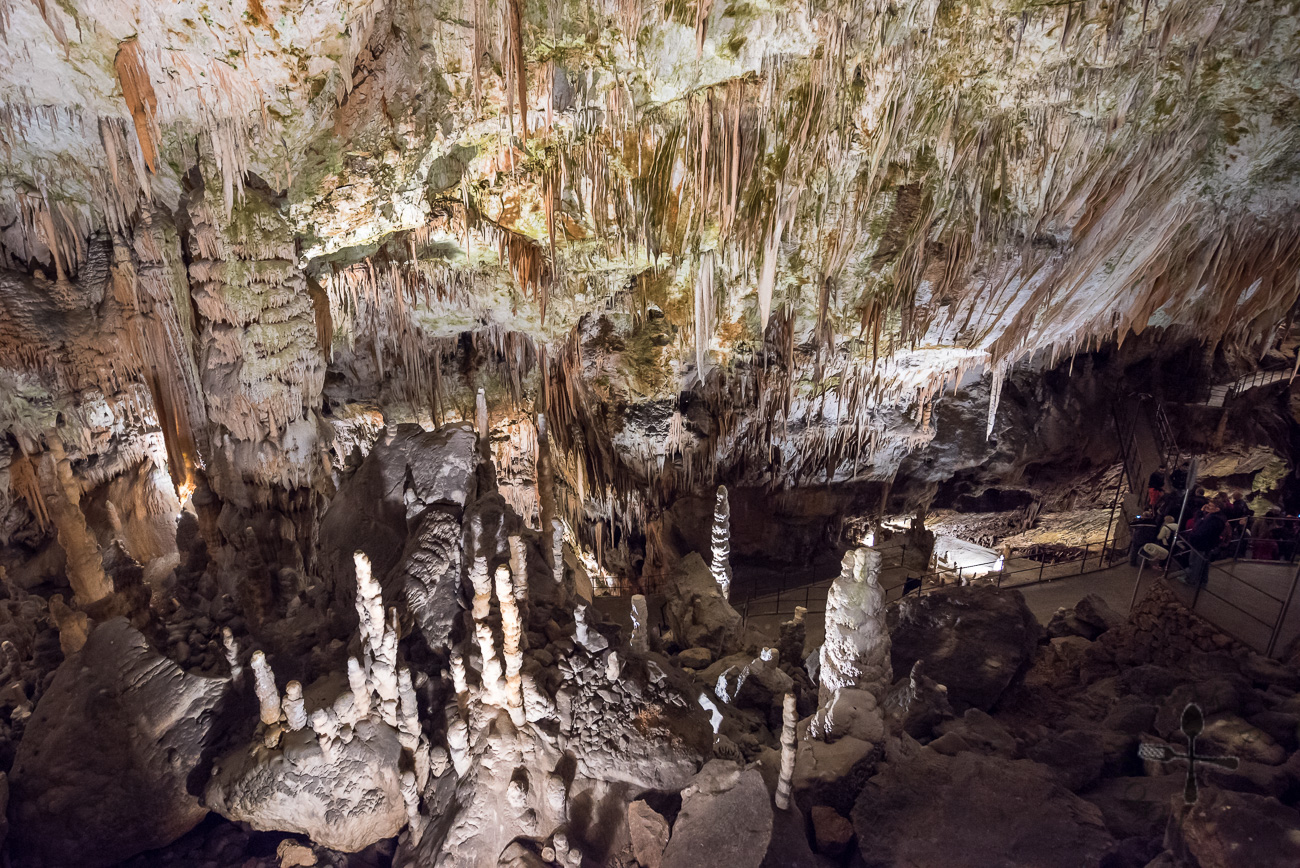 To allow visitors to be able to see in this otherwise pitch-black cave, lights have been installed all around the tourist trail. The presence of light and the carbon dioxide produced by visitors resulted in mold growing in the cave, hence the greenish tinge in most of the photos. As such, flash photography is not allowed in the cave, though it's hard to enforce this rule as the tour groups are too big. 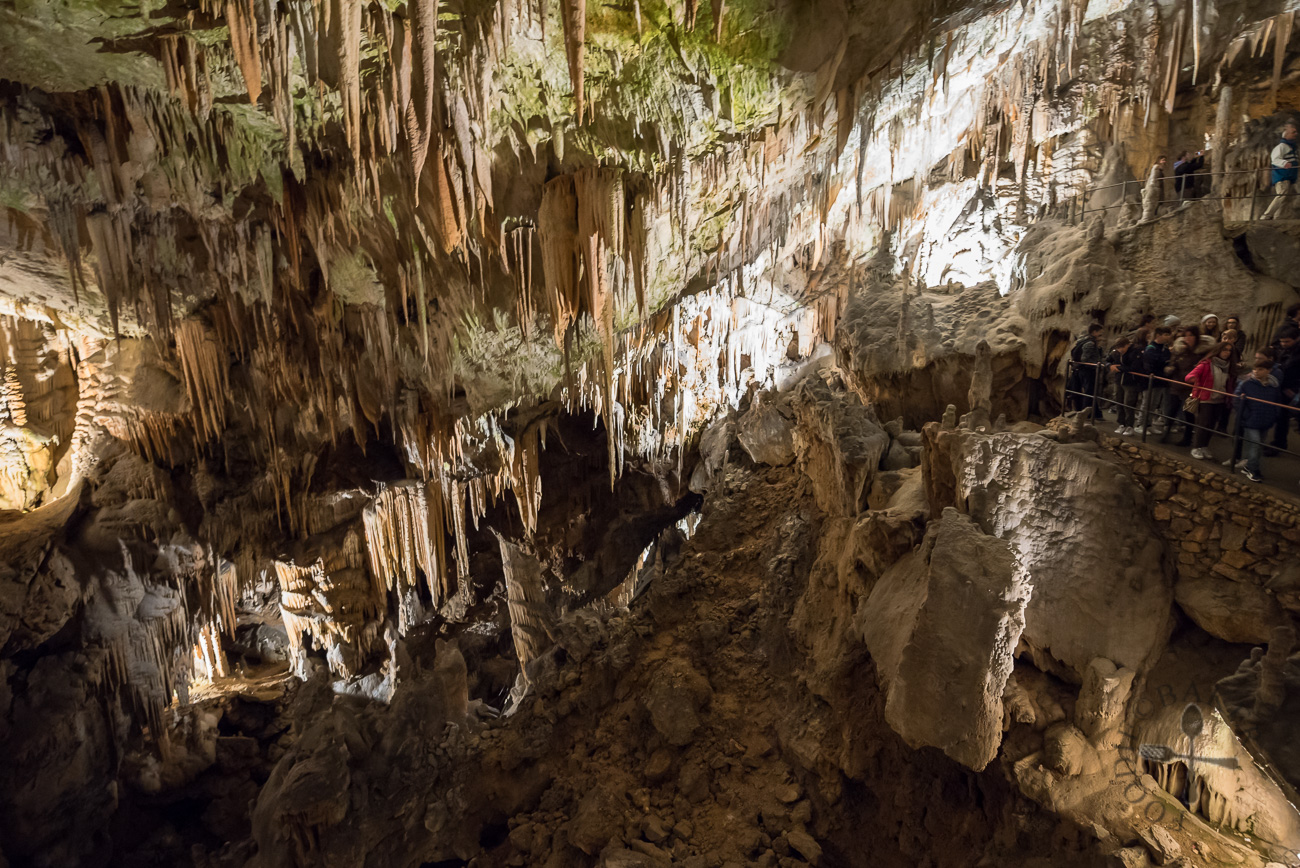 Other natural colours that can be seen on the stalactites and stalagmites are red and orange (due to the presence of iron minerals) and black (due to manganese minerals). The most beautiful ones are the white ones - they are of pure, concentrated calcium carbonate with no traces of other minerals.

The most famous stalagmite in the whole of Postojna Cave (and perhaps the most photographed) is the Brilliant (the one on the left in the above photo), found in the Brilliant Passage. Approximately 5 metres tall (meaning it's about 50,000 years old!), the stalagmite is of pure calcium carbonate, giving it a shiny, white colour. Some says it look more like a double-scoop ice cream - what do you think?

At the end of the trail, there is a vivarium featuring the olm (also known as human fish). It is a small and weird-looking (to some, it may be cute) aquatic salamander that can be found living in Postojna Cave.

The olm's skin colour is that of a human (hence the nickname human fish) and is completely blind. It is also incredibly small, only about 30 centimetres long, but it can live really long, at least 60 years! There's a separate exhibition, Vivarium Proteus, that has more information about this interesting creature. More information can be found here.

At the end of the tour, we took the train back to exit the cave.

Other Things to Do

Besides visiting Postojna Cave, there are a few other attractions that can be done within the park premises, or just slightly further out of Postojna Cave. One of them is the two-storey EXPO Postojna Cave Karst, which boasts the world's largest exhibition on caves and karst. Travellers visiting the EXPO can learn all about the karst topography, as well as how Postojna Cave became such a popular attraction. The use of interactive technology and projections in the EXPO help keep children entertained, making the experience educational and enriching. 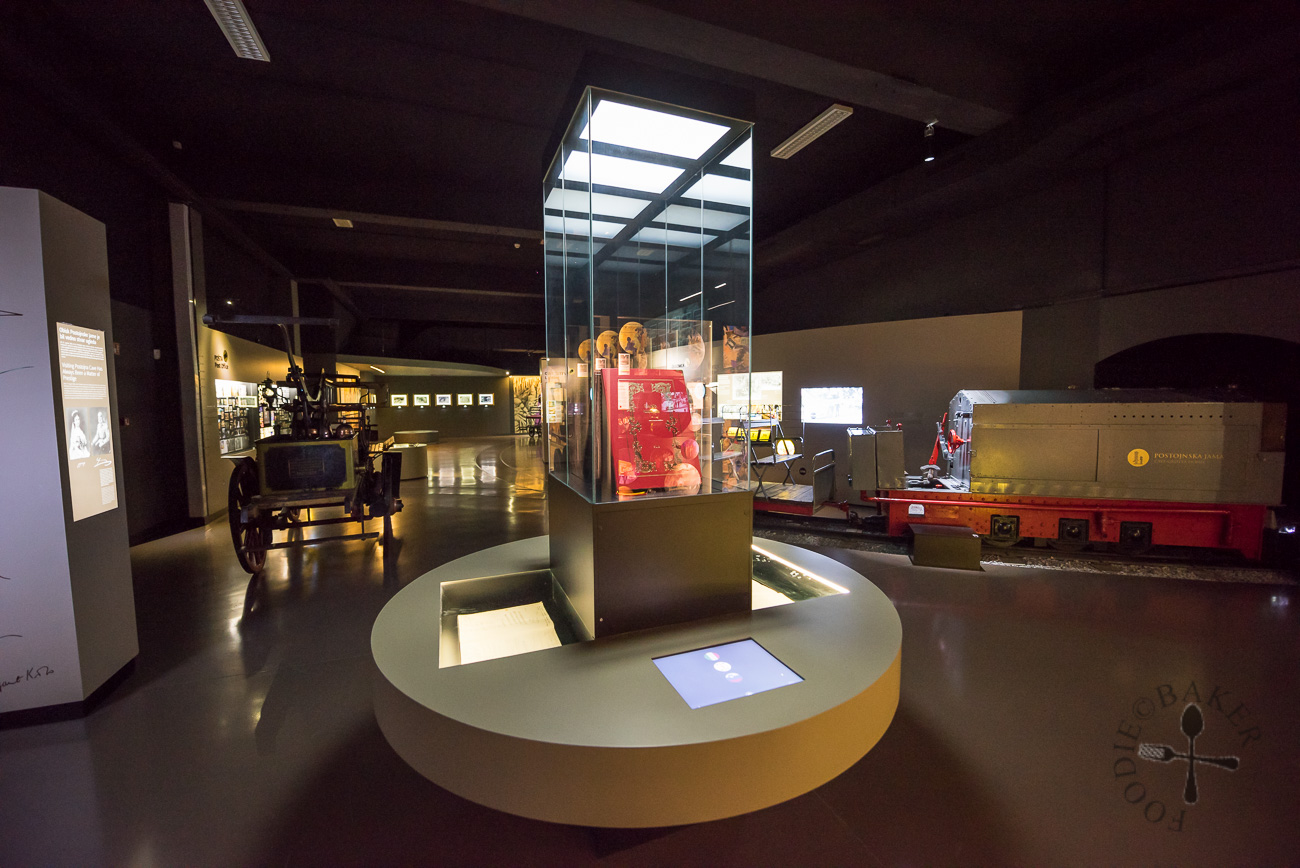 Predjama Castle is located about 9 kilometres away from Postojna Cave. Built into a 123-metre vertical cliff in the 12th century, the castle's white walls (reconstructed in the 16th century) are a stark contrast against the dark, grey cliff and surrounding greenery. We did not enter the castle as we weren't castle fans, but if you are interested, more information can be found here.

Postojna Cave tour timings (duration: 90 minutes) (do note that there is no free & easy, you can only enter the cave with the guide at the stipulated timings):

If all tickets are sold out for a particular timing, you will have to join a later tour, so arrive early to get your tickets or purchase them online.

Opening hours of other attractions:

If you choose to visit more than one attraction, there are combo tickets which you can get to save some money. Prices of these combo tickets can be found here.

Essential items: Good walking shoes as the floor may be slippery and there's a bit of upslope climbing; warm jacket as the temperature in the cave is about 8 to 10 degrees Celsius throughout the year - a waterproof one may be good as water will drip from the cave ceiling; camera to take photos of the amazing cave (do note that no tripod is allowed and no flash photography in the cave!)

With its easy trail and ample facilities, Postojna Cave is an extremely popular tourist destination. Hence, huge crowds and numerous tour groups are expected during the visit. Each tour group consists of 70 to 80 people so if you want to ask the guide questions, you will have to stick close to the guide. While I usually don't like touristy destinations, I honestly feel that this cave is worth a visit because the cave's sheer size and the amazing stalactites and stalagmites formations are truly one-of-a-kind. Look past the crowd and enjoy its beauty!

Full disclosure: Our visit to Postojna Cave was sponsored by Postojnska jama d.d. and no other monetary compensation was received. All experiences and opinions are our own!