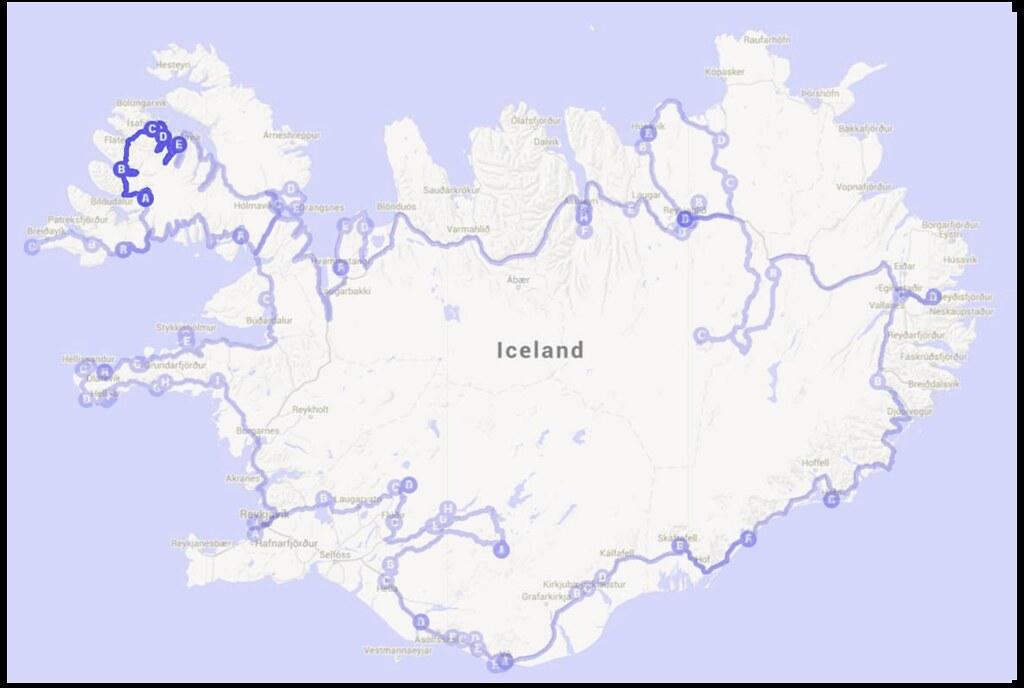 Time for Day 18 of our Iceland travelogue! I'll reveal later why I'm combining Day 19 of our travelogue as well, so read on!

We camped at Dynjandi campsite the previous night (which was free by the way) and woke up at around 8 in the morning. We washed up, made ourselves a cup of coffee each then off we go!

We cruised past a few towns before reaching Ísafjörður after 1.5 hours of driving, along the way we experienced a little bit of hail! Ísafjörður, meaning "ice fjord" in Icelandic, is a town in the northwest of Iceland with a population of about 2,600. It is one of the largest towns in Westfjords with 3 petrol stations and Bónus supermarket. 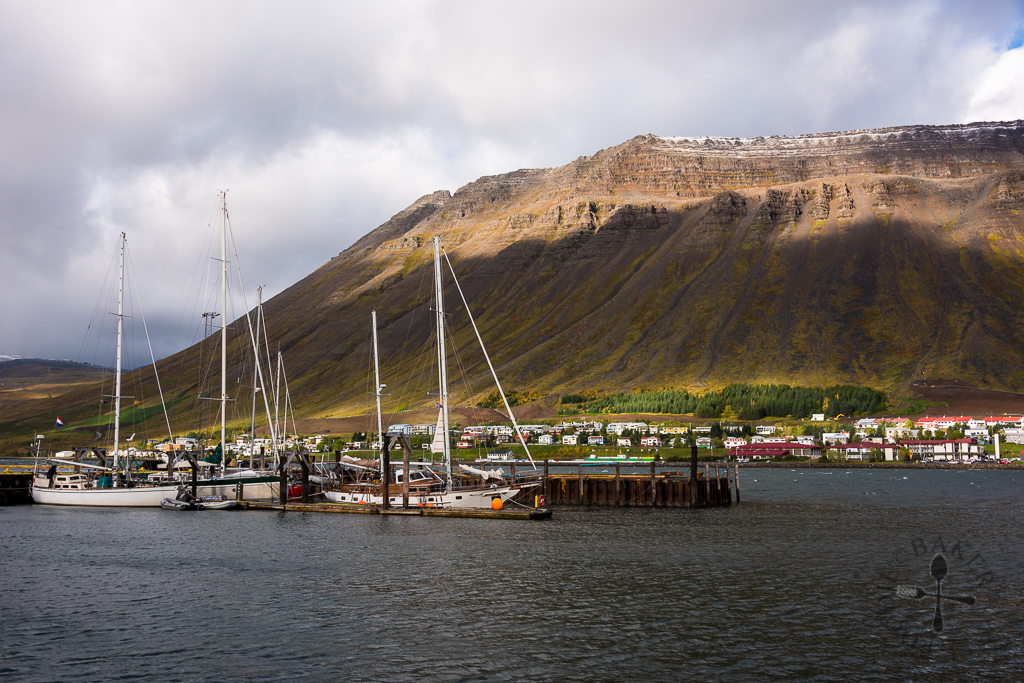 After feeding lunch to our Kuku Camper car, we headed to Tjöruhúsið for our own lunch!

Tjöruhúsið is a popular seafood restaurant owned by a couple, Maggi and Ranka. Maggi cooks the fish while Ranka preps the soup and tend to the guests. The restaurant is nestled inside a 1781 fish warehouse next to the Heritage Museum, and is open during summer only (May to September) as the warehouse is not insulated. We were there on the 29 September - if we were a few days late, we wouldn't be able to enjoy this delicious meal!

We reached Tjöruhúsið about 30 minutes before their official opening hours, but Ranka welcomed us in to take a seat first. She noticed that I was feeling cold and promptly put a big blanket around me, which was such a sweet touch!

After a bit of waiting, Ranka brought us a gigantic tureen of tomato-based seafood soup. We were stunned at the massive serving but Ranka assured us that we don't have to finish it. But to be honest, if I could, I would have gulp down every single drop of the soup because it was absolutely and incredibly flavourful and delicious. I had 3 servings of the soup while X had 2, and we only finished half of the soup in the tureen.

While we were slurping up the seafood soup, Maggi arrived and enquired what we want for the mains. Earlier I mentioned that it's an a la carte lunch, but there's actually no menu in Tjöruhúsið. Tjöruhúsið serves only catch of the day, so depending on your luck, you will be in for a surprise! Maggi showed us a sheet of fish illustrations, recommended the catfish and the halibut, and of course that's what we ordered. The smell was so seductively irresistible when the fish was sizzling away in the kitchen!

The fish is cooked and served all in the same pan, with salad and boiled potatoes on the side. The catfish was seared and served in a delicious and rich cream sauce, with the catfish meat so soft and tender that it melts away in the mouth. The halibut was pan-fried in butter and has a firmer meat texture. Both are absolutely fantastic but I personally prefer the halibut because its simple preparation enhanced the natural sweetness of the halibut. The cream sauce became a tad too rich for me at the end.

We were so stuffed after our meal (we couldn't even finish the potatoes and salad) that we decided to rest at the restaurant for a good 30 minutes, sipping coffee and reading the local newspapers before saying goodbye.

I highly recommend anyone who is visiting Ísafjörður to drop by Tjöruhúsið for a meal. You must go with an empty stomach so you can fill up on the deliciousness. Personally I feel that unless you are huge eater or would like to try a bit of everything, the a la carte lunch is more value-for-money. We spent ISK 7,000 for this delicious meal (€54; SGD 84) for the 2 of us, while buffet dinner is at ISK 5,500 per pax (€43; SGD 65). We didn't make any reservation and we were the only patrons for lunch that day (perhaps because the season is ending), but do give them a call and make reservations if you are visiting during the high season, especially for dinner!

We stopped by Bónus supermarket to top up our groceries and head off to drove to Súðavík Arctic Fox Centre, a non-profit research and exhibition centre. The centre was established on 15 September 2007 with the aim to educate locals and foreigners everything about arctic foxes, the only native terrestrial mammal in Iceland.

We paid ISK 950 (€7; SGD 11) per person to enter the centre (price has been increased to ISK 1,200 in 2016 and kids under the age of 14 visit for free). We first started our tour of the place with a 35-minute video on arctic fox - which I recommend watching to understand more about these cute little animals. We then walked through the small 2-storey centre to see the exhibitions.

The arctic fox is found in two colour morphs: blue and white. The blue is dark grey throughout the year but in late winter, the sun bleaches the fur and they can look almost white in spring. The latter is white in winter but in summer, its fur becomes a mix of brown and light grey. In Westfjords, majority (85%) of the arctic foxes are of the blue morph.

The above blue morph arctic fox was shot by hunters in the Skálavík region of the Westfjords in 2013. It was then donated to the centre for use in dissection projects. The average weight of an adult arctic fox is between 3 to 5 kilograms, but this male arctic fox weighed a whopping 7.8 kilograms, making it the largest arctic fox in Iceland!

I absolutely adore the white morph arctic fox because it's so pretty! We stroked the fur and were surprised by its softness and silkiness.

Fox hunting has been practiced since the settlement of Iceland, partly because of demand for fox pelt and partly to protect lambs and other livestock. We learned from Ásgeir (the owner of Innri-Múli farm) that despite its small size, the arctic fox can be really strong. It also tends to kill many sheep at one go, before dragging one off to feed its family, resulting in damage and losses to the farmers. In Iceland, there are still some farmers who own hunting licence and will shoot the arctic foxes if they are sighted near their farms.

While arctic foxes are hunted throughout Iceland, those in Hornstrandir Nature Reserve in Westfjords are protected. The nature reserve is open only during summer and can only be accessed via a ferry. The protection has resulted in arctic foxes and humans to have reciprocal interests in each other. Though we weren't able to visit the nature reserve, there were 2 blue morphs male arctic foxes at Súðavík Arctic Fox Centre, rescued after their parents had been killed during a fox hunt in June 2015.

One of the arctic foxes was more inquisitive and playful, and would come up close to us, allowing us to take photos of this beautiful animal, while the other was a bit camera-shy that day!

If you happen to be around the area and want to learn more about arctic foxes and their role in Iceland, do head to Súðavík Arctic Fox Centre for a visit! Opening hours of the centre can be found here.

Hvítanes in Westfjords is another great spot for seal watching, and when we arrived, we noted that the owners of the farm (called Hvítanes too) had provided binoculars for travellers to observe the seals. Our car would make a loud beep sound whenever we lock it, so in a bid to not disturb the seals, X chose to lock the car from the inside - without realising that he had left the car keys inside! That moment was truly epic as we were both stunned beyond words - it was a frustrating moment then, but quite amusing when we think back about it.

We had no way to unlock the car, so we head into Hvítanes farm to seek for help. We were greeted by an elderly couple, Kristján and Sigríður, who unfortunately only knew Icelandic. Luckily they had a guest at that time and he helped translate our situation to Kristján and Sigríður and contacted KukuCampers on our behalf for help.

It was resolved that KukuCampers would send the spare car key via a domestic flight to Ísafjörður the next day and we would have to make arrangements to collect the keys and settle our lodging and meals for the night. We discussed with Kristján and Sigríður and thankfully they allowed us to stay with them for the night and kindly provided us with meals.

Later that night, 4 more guests arrived at the house and we learned that one of them was a representative from the National Museum of Iceland while the rest were from a construction company. They were tasked to restore Litlibær,  a little farm built in 1895.

The next morning, we found out that the morning flight was postponed due to bad weather so we decided to try conversing with Kristján and Sigríður to see if we can help out with anything around the house - thank you, Google, for Google translate! We helped out with some household chores, then Kristján brought us to Litlibær.

Litlibær was built in 1895, and was occupied by two families that lived in their own half of the house, which was divided by a wall through the middle, until 1969. The barn (for cows and sheep), stable and chicken coop were under restoration. The National Museum of Iceland planned to restore them to their original state and educate travellers about the farmers' lives at that time. There is a cute wooden house at Litlibær where Kristján and Sigríður serve waffles and coffee to weary travellers during summer.

And how can we miss the seals who were, in part, responsible for locking us out of our own car? Hvítanes is one of Iceland's most easily accessible seal colony, where large numbers of Harbour seals can be found relaxing on the rocks just meters from the shore. 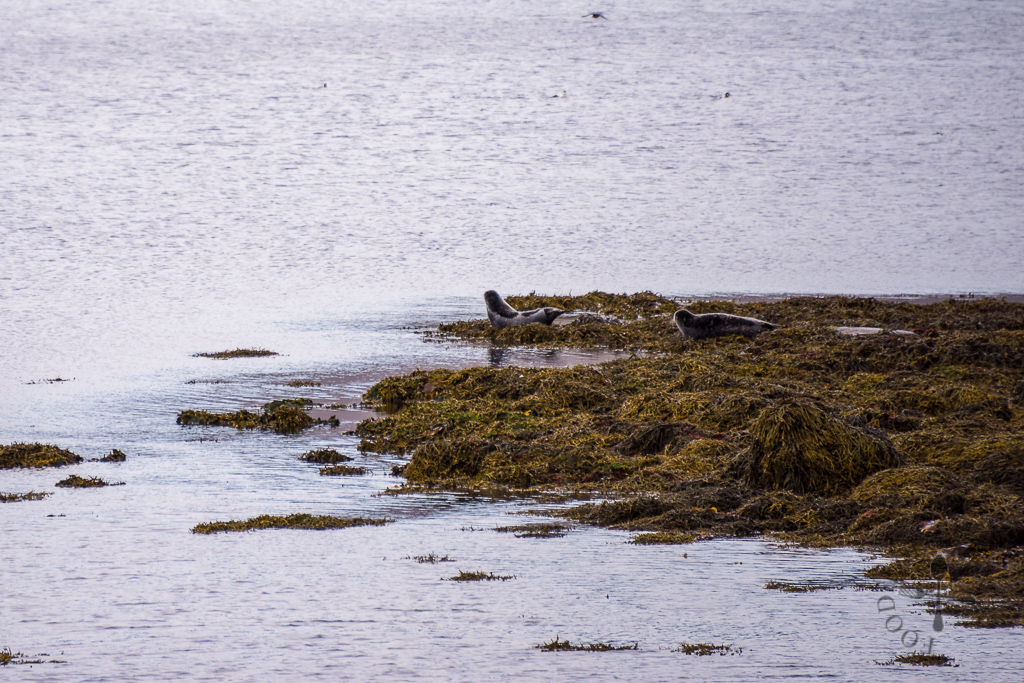 As mentioned earlier, Kristján and Sigríður have made the area more accessible by making a car park, putting up benches, and providing binoculars to observe the seals. Occasionally you may also see Sigríður's homemade jam for sale there!