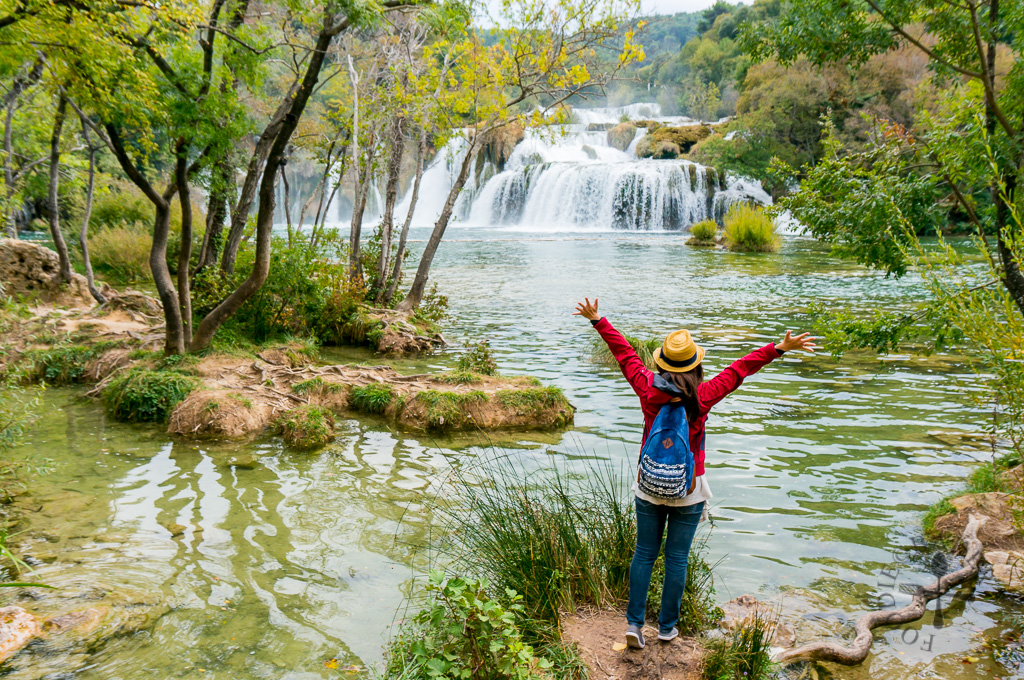 Finally continuing onto Day 11 of our Balkans travelogue (very, very long overdue I know!) We had our breakfast at Split, Croatia before splitting ways with our friends to collect our rental car. Our first stop after collecting our car is to Krka National Park, which is situated along the 72.5-kilometre long Krka River. The park covers an area of about 142 square kilometres, including two-thirds of the river. The most magnificent and famous attraction in Krka National Park is the waterfall - which you will see when you read on!

Getting to Krka National Park (By Car)

There are five official entrances to Krka National Park but the two main ones are Lozovac Entrance and Skradin Entrance.

Lozovac Entrance (43.796662, 15.968030) was the entrance we used. It took us about 1 hour to reach there from Split. There is a huge parking lot whereby parking is free all year round and park tickets can be acquired from the sales office located at the end of the parking lot. From April to October, free shuttle buses are provided by the park to transport travellers from the parking area to the start of the hiking trail (the red dot in the image above) which takes about 10 minutes - do note that park tickets will be checked prior to boarding. For the rest of the months, there won't be any shuttle buses provided but it seems that travellers can drive their car into the park (perhaps due to low traffic during the winter months), however I cannot verify if this true as we were there in October.

Skradin Entrance (43.817089, 15.923298) is a bit more unique as after parking the car in the town Skradin (there are no free parking at the entrance - we have previously asked Krka NP), travellers will have to take a 25-minute free boat ride into the park. Boat rides are only available from April to October, so use this entrance only during this period (sometimes there may be boat rides in March and November, so it's best to call and check).

Getting to Krka National Park (By Public Transport)

From online research, the way to get to Krka National Park by public transport is via bus to the town Skradin from Šibenik, Split, Zadar, Zagreb or Plitvice Lakes National Park. Bus timings can easily be researched online here. Do note that Skradin is usually a stop along the bus route and not the final station. I read that it's possible to take a bus from Šibenik to Lozovac Entrance but wasn't able to find any bus timings on it online.

The downside to taking public transport has got to be the timing. Most buses reach Skradin about 11 in the morning and leave Skradin latest at around 6 in the evening. So depending on how much time you want to spend in the park, it may be better to stay a night at Skradin.

The entrance tickets are priced the same regardless of which entrance you choose to enter the park from. However, the prices vary from season to season, so check out the prices here.

We did the Skradinski Buk Trail, also known as Educational Trail, a 1.9-kilometre comfortable walk. As it was no longer the peak season, the park was not crowded at all, making the walk extremely pleasant. Below are just some photos of the place:

Krka Monastery, protected as part of Krka National Park, is a Serbian Orthodox monastery dedicated to the Archangel Michael. The oldest mention of the monastery was in 1345, though the current church was erected in 1422.

And we are finally at the most famous highlight of Krka National Park - the Skradinski buk waterfall! It is the longest waterfall on the Krka River of about 800 metres, and is created by travertine barriers, islands and lakes from the combined waters of the Krka and Čikola Rivers.

Travertines are deposits made of limestone (calcium carbonate) which precipitate out of running water. It creates barriers, thresholds, dams, cones and other geomorphological forms. The travertines of Skradinski buk waterfall are about 7,000 years old and it's still growing today at about 3 millimetres per year.

Swimming is allowed at the lower falls, and we did spot a few people swimming that day. I just cannot imagine how crowded the waters will be during summer.

Boat excursions are not included in the entrance ticket and can be purchased separately in the park. Details on boat excursions and the prices can be found here and here respectively. We didn't do any boat excursion due to time constraints.

We only did the 1.9-kilometre Skradinski Buk Trail during our stay in the park and even though the hike should only last 1-hour, we ended up spending 3 hours in the park as we stopped many times for photos. So if you want to do a boat excursion, it's best to do some planning.

I enjoyed our time within the park - the hike was nice, quiet and serene and the Skradinski buk waterfall was quite impressive (I just have a thing for waterfalls). I only wish that the park will implement a ban on smoking within the park as we could smell cigarette smoke as we walk, which honestly ruined the experience a little.

Zadar is the oldest continuously inhabited city in Croatia, with earliest evidence of human life from the late Stone Age! It was also where we were going to spend the night at, about 1-hour drive away from Krka National Park. By the time we reached Zadar and checked in to our accommodation, it was already 5 plus in the evening, so we quickly rushed to see the sunset at the Sea Organ.

The Sea Organ is an architectural structure opened in 2005 which plays music by way of sea waves and pipes located below a set of large marble steps that extends for about 70 metres along the coast (you can hear a piece I've recorded here!)

Near the Sea Organ is a large light display made with three hundred multi-layered glass plates arranged to form a 22-meter big circle. Powered by solar energy, the lights create a lightshow in the rhythm of the sea waves.

After the sun has fully set, we head back to the main city area for dinner in a random restaurant before heading back to our accommodation for the night. The next day we left early for another famous National Park in Croatia - Plitvice Lakes National Park. Stay tuned and in the meantime, check out the previous travelogue or our 25-day Balkans itinerary (including our expenditure)!