To be honest, I have absolutely no idea who created this day - but I would really like to thank him or her for creating this day (and also the person who invented pudding) because I never, ever knew that chocolate pudding can be so easy to make, and so, so, so damn delicious.

The history of pudding is really complicated - the very first pudding that supposedly originated in the 17th century was by the British, and they were more like sausages (think blood sausages / puddings). By the late 18th century, the traditional puddings no longer contain meat, and in 19th century, puddings were boiled (water bath method) and it's more like a cake, traditionally served at Christmas time.

This luscious and creamy type of pudding I'm sharing today is more commonly known as custard. However, in the 1840s, the Americans somehow start to call custard "pudding" and the name got stuck since then. Custard is usually thickened with eggs, but in 1837, an English chemist, Alfred Bird, invented custard powder (mainly a mix of cornstarch and milk powder) to thicken custard as his wife was allergic to eggs. Soon, this custard powder became a well-known alternative to egg thickeners and people soon began to use this custard powder or other cornstarch derivatives as thickeners for custards.

The earliest print reference for chocolate pudding (the cake-like dessert) is in 1730, while the custard-y version dates back to the 19th century. Apparently they were only enjoyed by wealthy people then. But today, chocolate pudding is one of the easiest and cheapest desserts to make at home and can be enjoyed by anyone!

The chocolate pudding recipe I used is from Smitten Kitchen, one of my favourite food blogs. I cannot help but tinker with the recipe - cutting the quantities down to make a small portion, and adding a touch of Baileys (I'm sure many of you all know by now I love Baileys in my desserts! 😛 )

The resulting chocolate pudding is exceptionally smooth, rich and creamy, with the dark chocolate giving a real chocolatey oomph with every mouthful and an alcoholic hint at the end. I'd probably never use semisweet, plain or milk chocolate for this chocolate pudding (as I love dark chocolate too much), but you can definitely use any of those chocolate if you prefer. Alcohol can also be omitted to make a kids-friendly version. 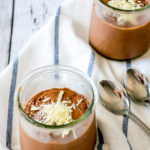