I recently added the National Food Day (you can get it here!) calendar into my Google Calendar to motivate myself to bake/cook more new dishes and to revisit some of the old favourites that are in a dire need of a revamp (seeing some of the old photos, like this one, just make me cringe).

I love making choux to eat and for parties / gatherings because they are quite hard to fail. However, I tend to make them round instead of an éclair shape because sometimes the éclairs won't turn out pretty - still delicious with all the pastry cream, just not pretty. But after watching Sadaharu Aoki's video on the piping (from 6:17 onwards) and much practice, I managed to get most of my éclairs to be straight and of an even width (some are still uneven, but oh well they all disappeared into my stomach before they made it for the photoshoot :))

I didn't take all the step-by-step photos today because I've already made them a long time ago (plus I was a little lazy today), so you can check out them out separately: choux step-by-step and pastry cream step-by-step. However, here are some extra notes to make a good éclair:

The Chocolate Éclairs I made today have triple chocolate in them - first in the creamy pastry cream, second in the luscious dark chocolate ganache and lastly topped with some white chocolate shavings. It's sooo good that I've already eaten 4 today and my friend finished up all 3 that I passed to her, so you can be assured this is a damn good Chocolate Éclair that is worth all the calories.

Happy Chocolate Éclairs Day once again! I'm aiming to celebrate Chocolate Pudding Day which falls on 26 June next, join me if you can! 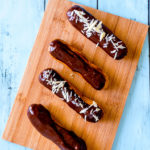