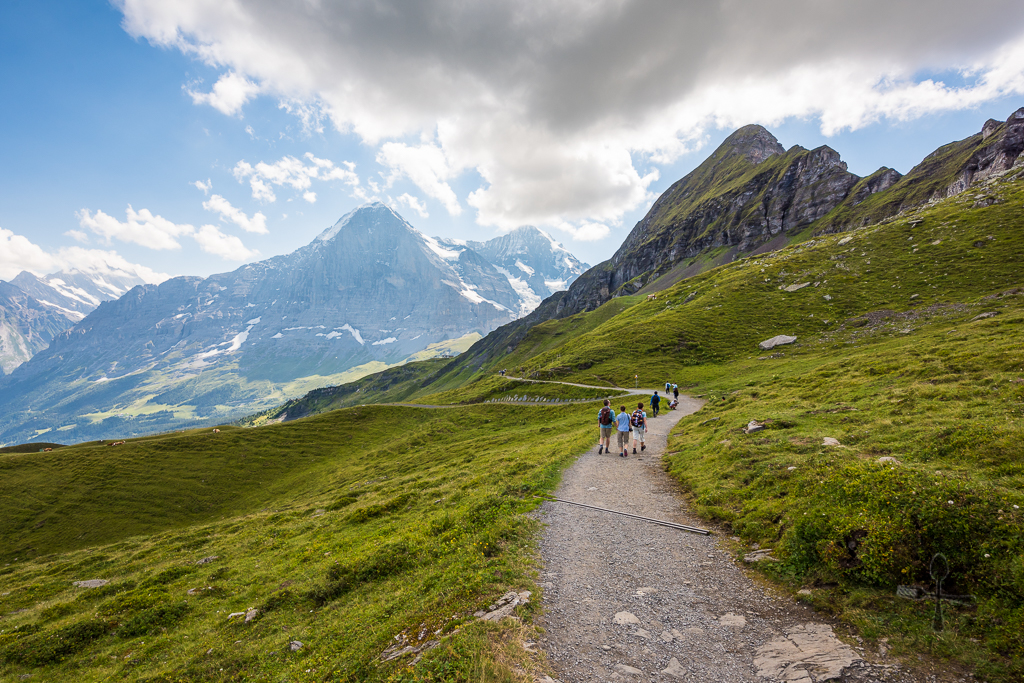 We arrived and checked in at Wengen at around 10 in the morning. Our original plan was to head up to the Top of Europe Jungfraujoch the next day or the day after to acclimatise ourselves (we had 3 days here). However, as the weather for the next 2 days in the Jungfrau region was forecasted to be cloudy, we decided to head up to Jungfraujoch on the first day so we could have a clear, good view. 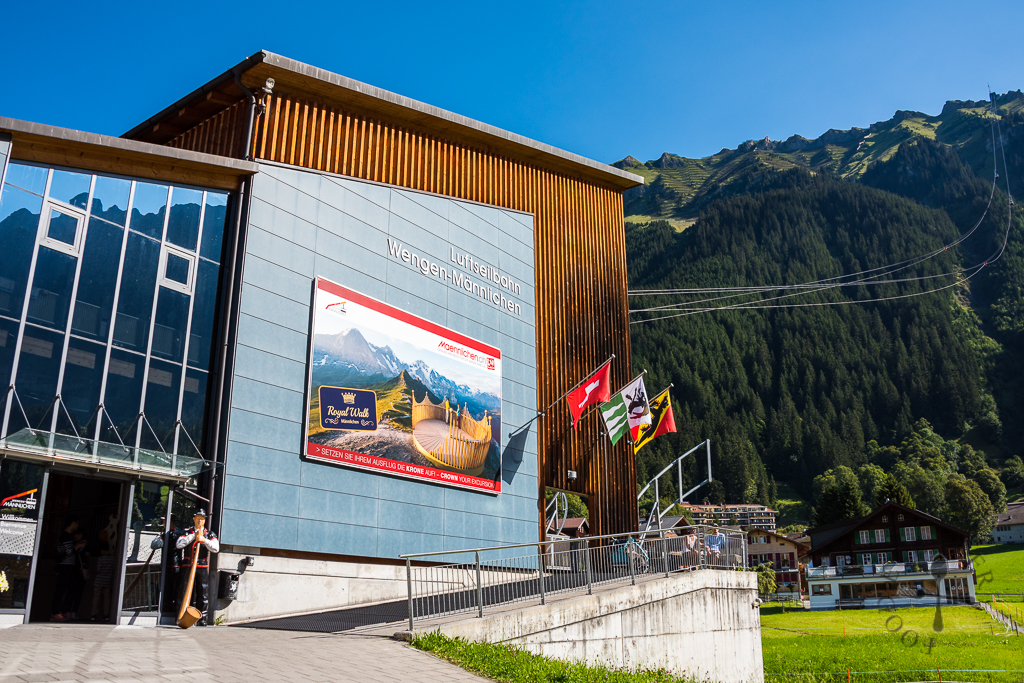 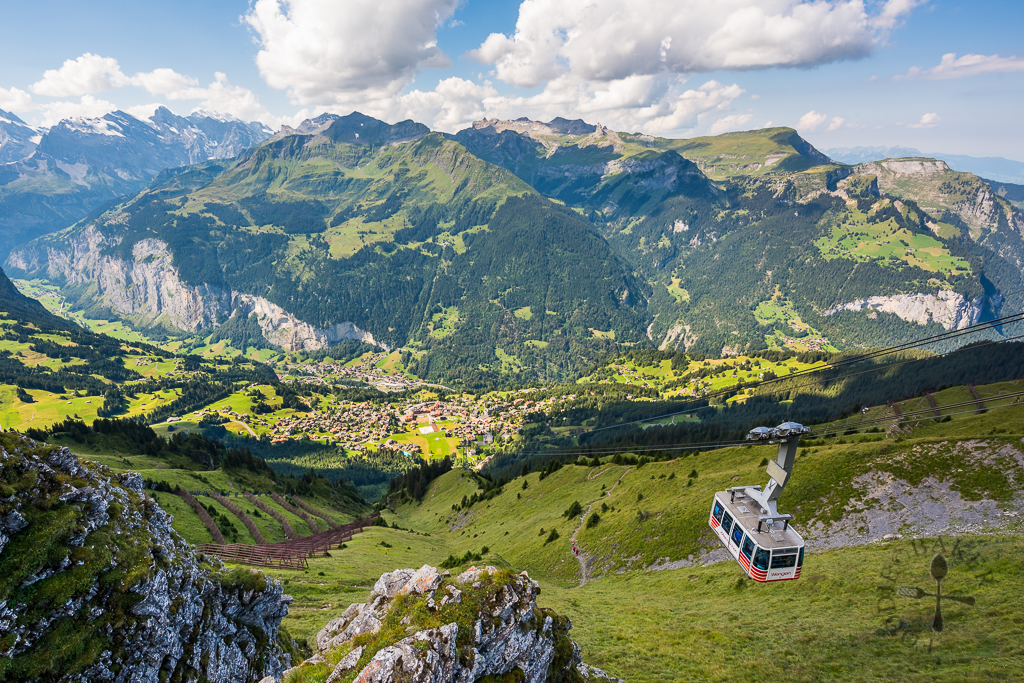 We originally wanted to go to Jungfraujoch first, then do the Panorama Trail Hike from Kleine Scheidegg to Männlichen, but our AirBnB agent advised us to do it the other way round as it will be an easier hike and the views will be much nicer. We decided to heed her advice, so after stocking up some food and drinks, we head to the Wengen–Männlichen Aerial Cableway.

We purchased the cable car tickets at 50% off with our Swiss Travel Pass. The cable car ride was rather packed but thankfully it lasted only about 5 minutes, and brought us up from 1,282 metres above sea level (MASL) to 2,229 MASL. 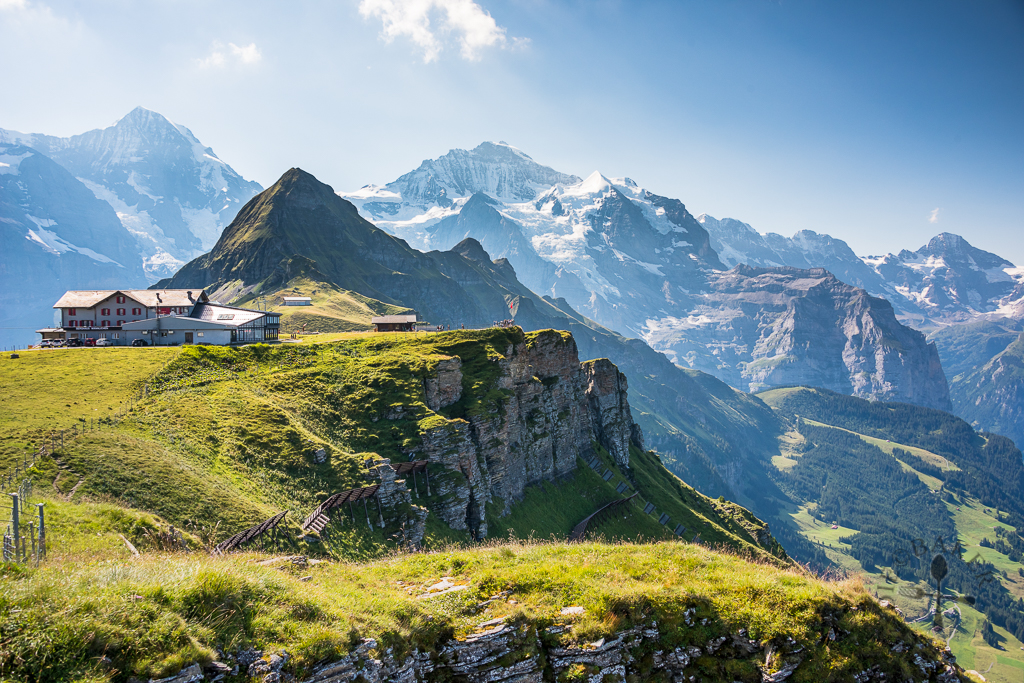 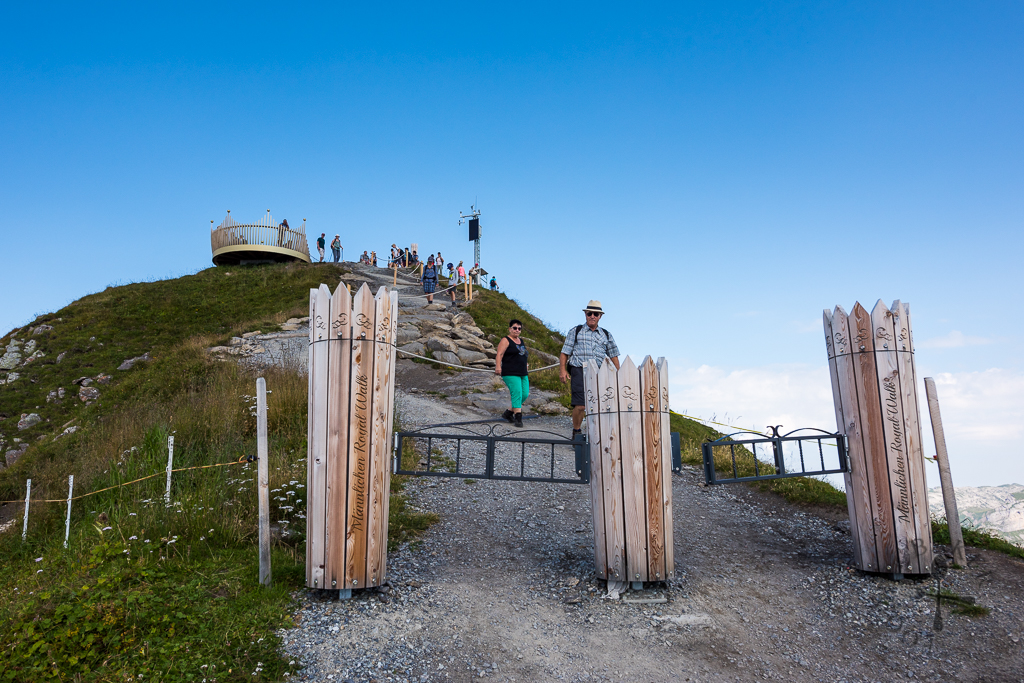 The last steep climb up the Royal Walk

The brochure online stated a “short, easy ascent” from the Männlichen cable car station – it was short indeed, only about 30 minutes, but the ascent was pretty steep, which left me breathless and warm by the time I reached viewing platform at the top which is built to look like a crown (now you know why it’s called the Royal Walk!) 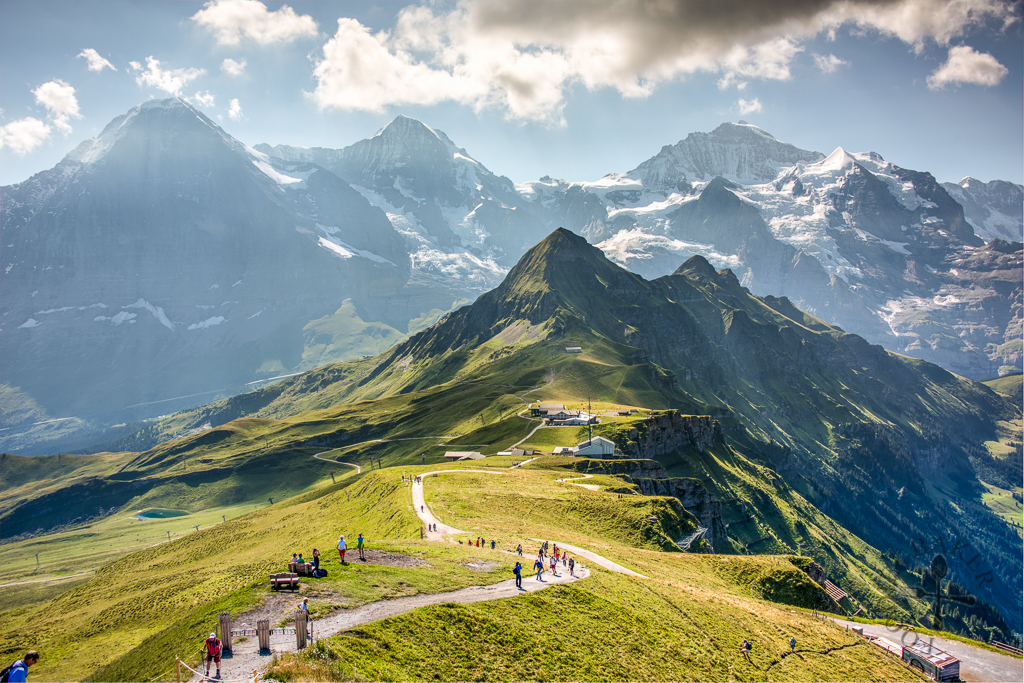 The winding ascent from the cable car station

We totally packed the wrong clothes for this trip – as we were heading to the alps, I thought that the weather would be cold, chilly, and windy, so I brought along more pants, thick jackets and wooly hats. However, we were blessed with sun on most of the days (which was a good thing!) and with all the walking and hiking, I regretted not packing more shorts and lighter jackets/cardigans! 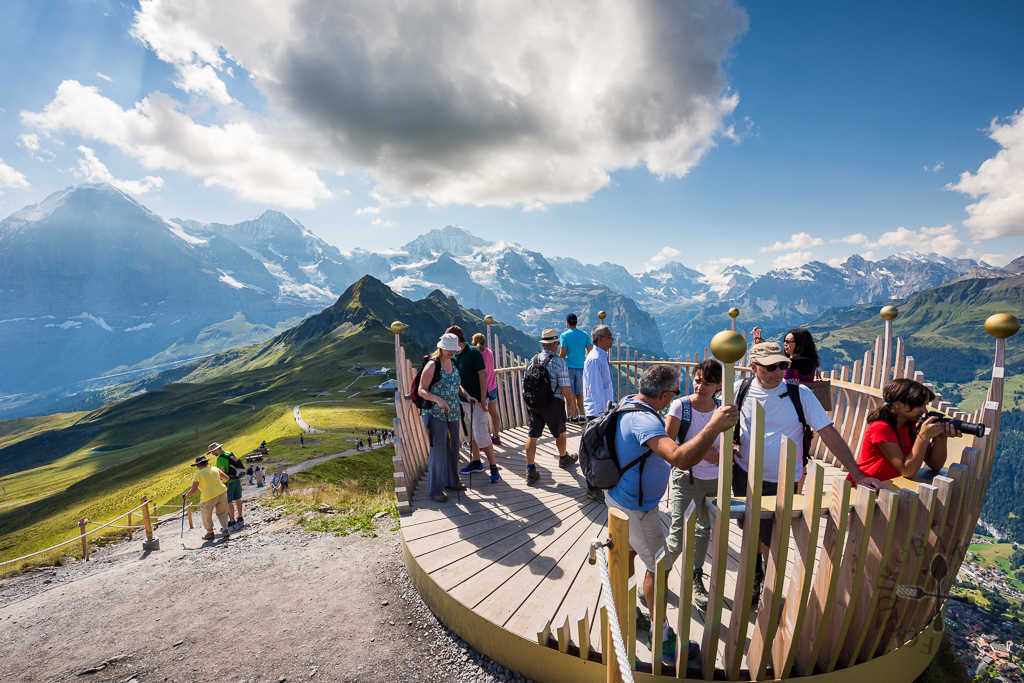 Viewing platform at the top

Even though we were all sweaty by the time we reached the top, the hike was well worth it. The crown-like platform at the top offers beyond stunning panoramic views – it’s so surreal being surrounded by so many mountains! The viewing platform also provides information on the as well as the names of the other peaks that lie ahead. We spent about 30 minutes there taking in the views and photos before descending the summit. As we were coming down, we saw a paraglider launching off, which was really cool. 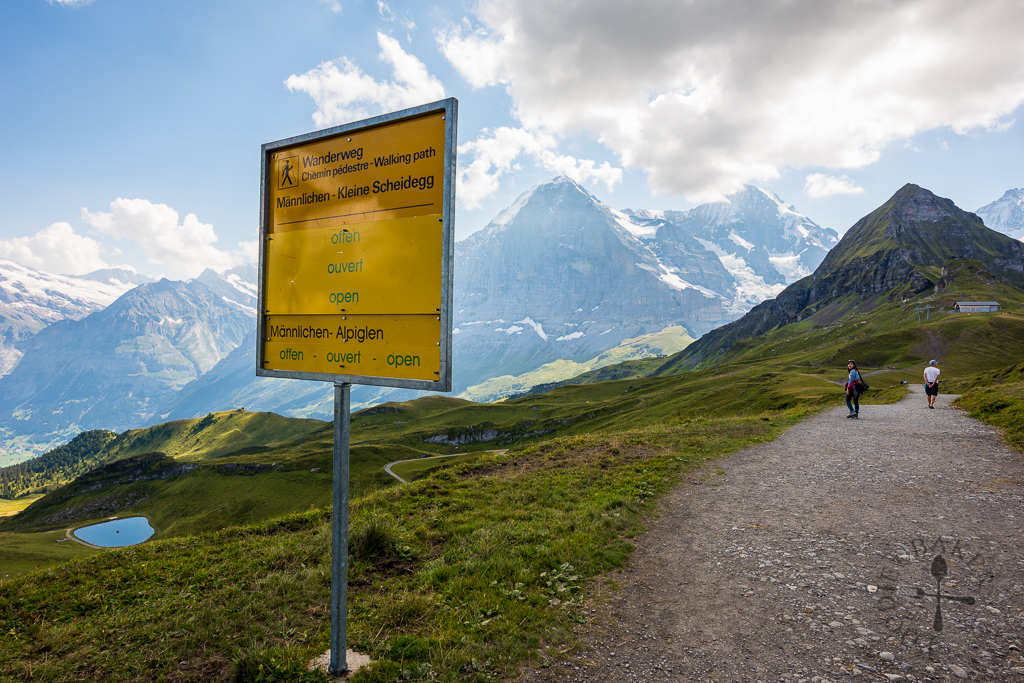 Start of the Panorama Trail 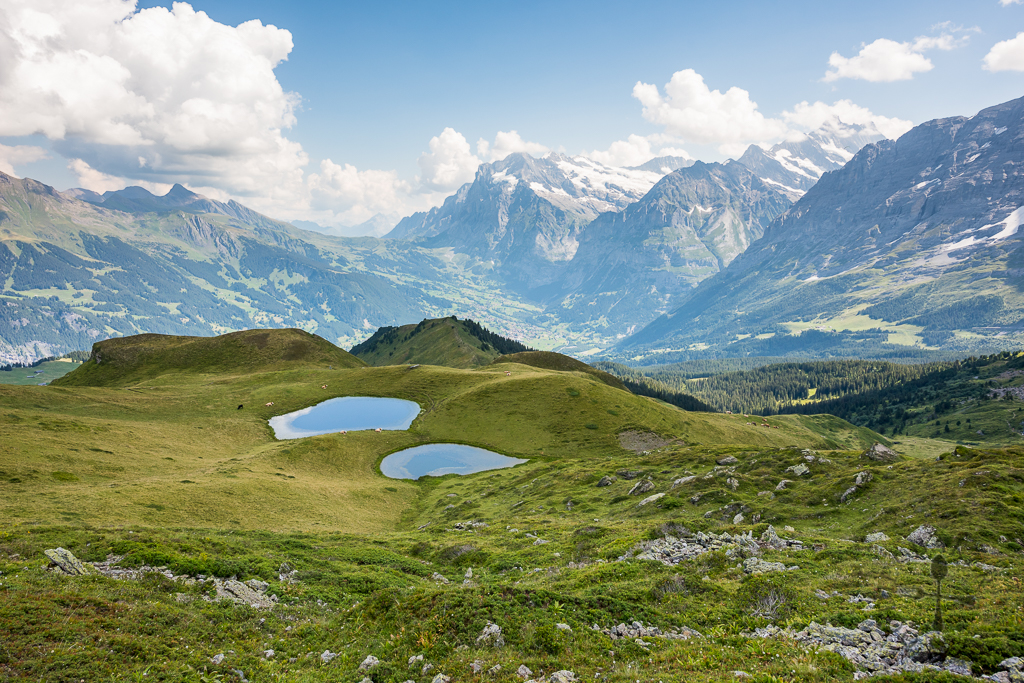 You’ll hear cows everywhere! (Can you spot them?)

After coming down from the Männlichen summit, we walked back to the Männlichen cable car station and embarked on a 4.4-kilometre hike to Kleine Scheidegg. It’s not called the Panorama Trail for no reason: we hiked facing the 3 majestic mountains – Eiger, Mönch and Jungfrau – while surrounded by alpine pastures. 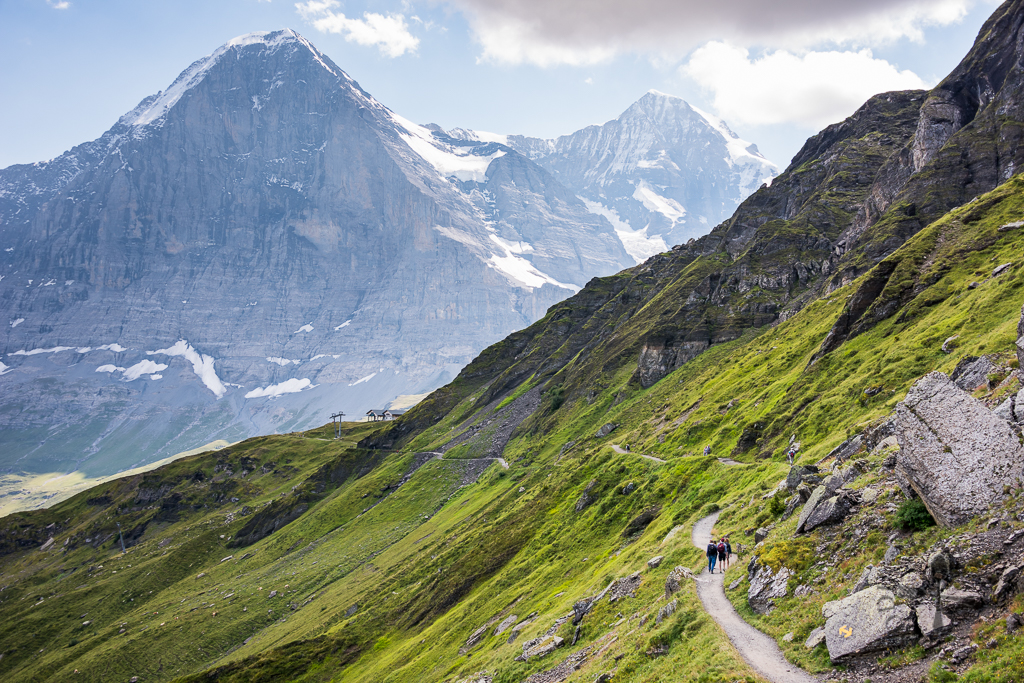 View when hiking towards Kleine Scheidegg

Together with the sunny blue sky that day, the views were so beautiful that our cameras’ shutters kept going off – everywhere was simply too picture perfect! I’m glad we listened to our Airbnb agent to do the hike from Männlichen, otherwise we would be hiking backfacing the 3 mountains. 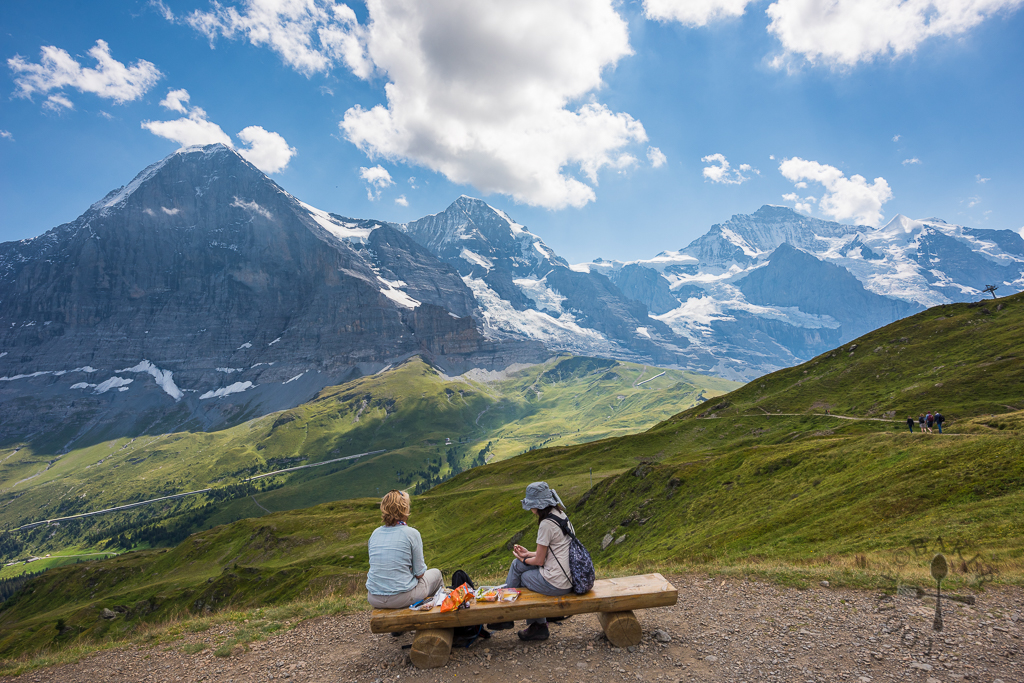 Picnic point halfway through our hike

The hike was easy because it was mostly level or downhill walk, so we didn’t perspire much. We took about 2 hours to complete the hike as we stopped many times for photos and also for a quick lunch break. Halfway through the hike there’s a picnic area with benches and toilet facilities – we didn’t use the toilets there though. 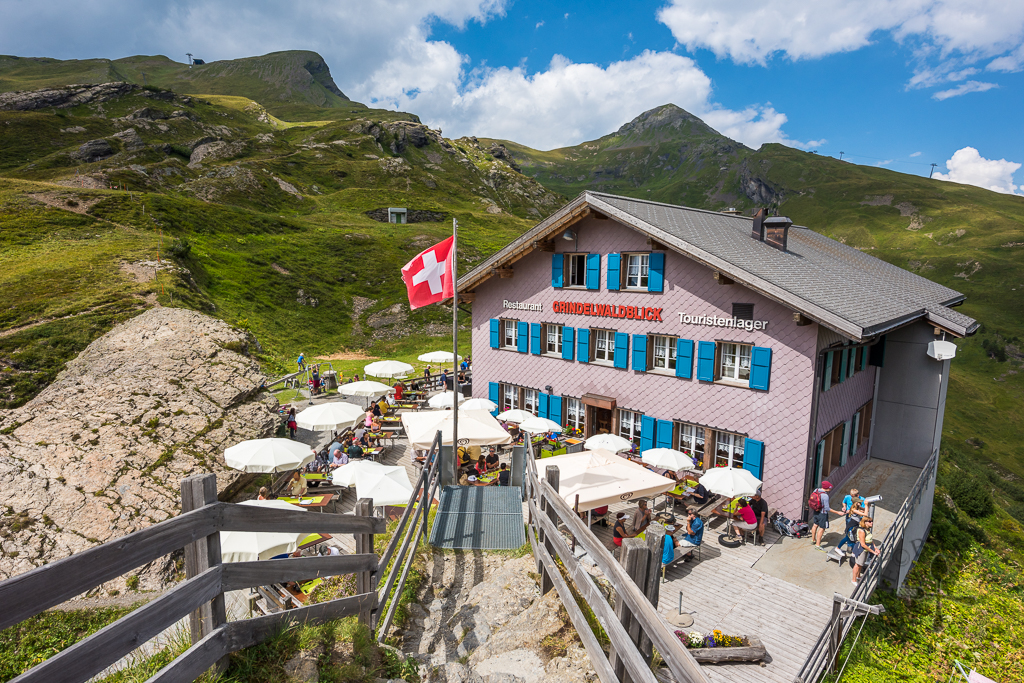 Just before reaching Kleine Scheidegg, we passed by a restaurant and spotted many people taking a break there. There’s also a small tower next to the restaurant where you can climb to take in the views. 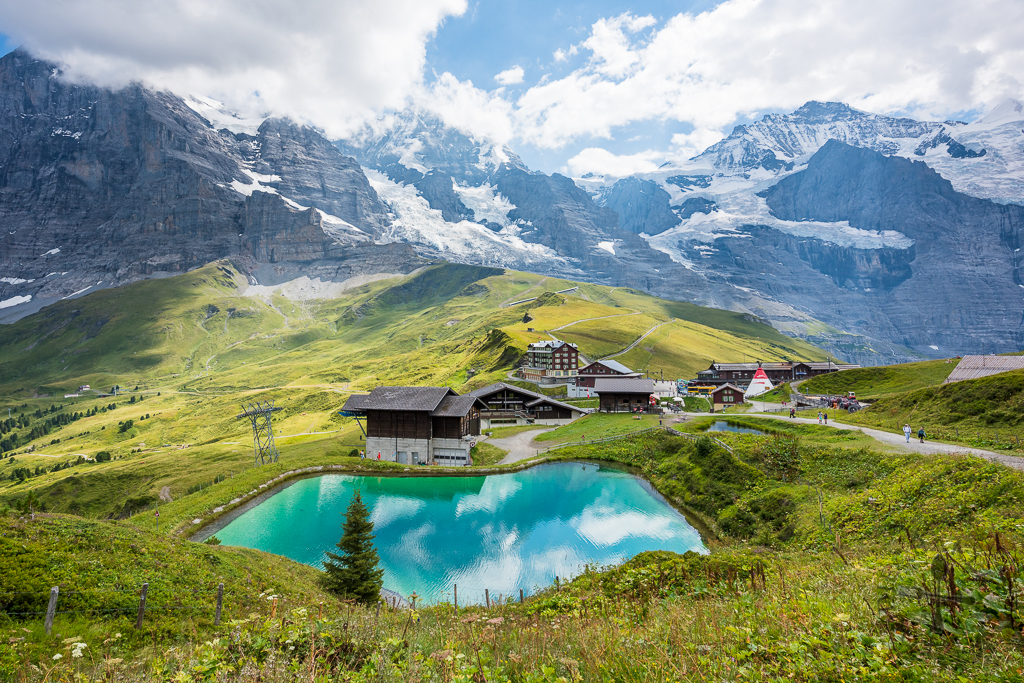 Saw a huge lake as we reached Kleine Scheidegg, I wonder if it will freeze into an ice skating rink during winter? 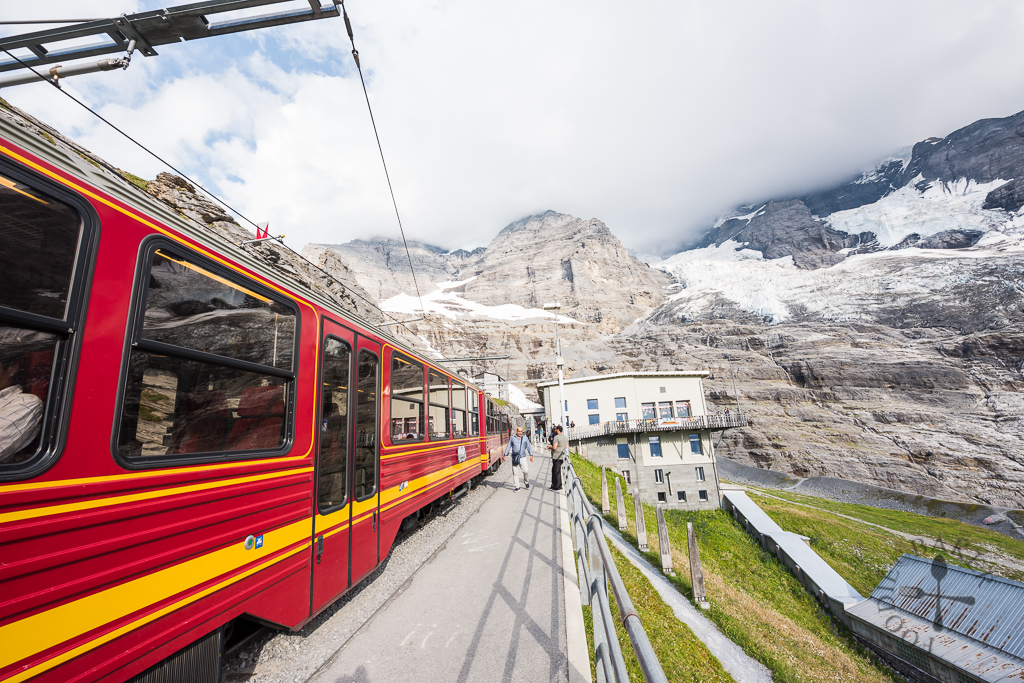 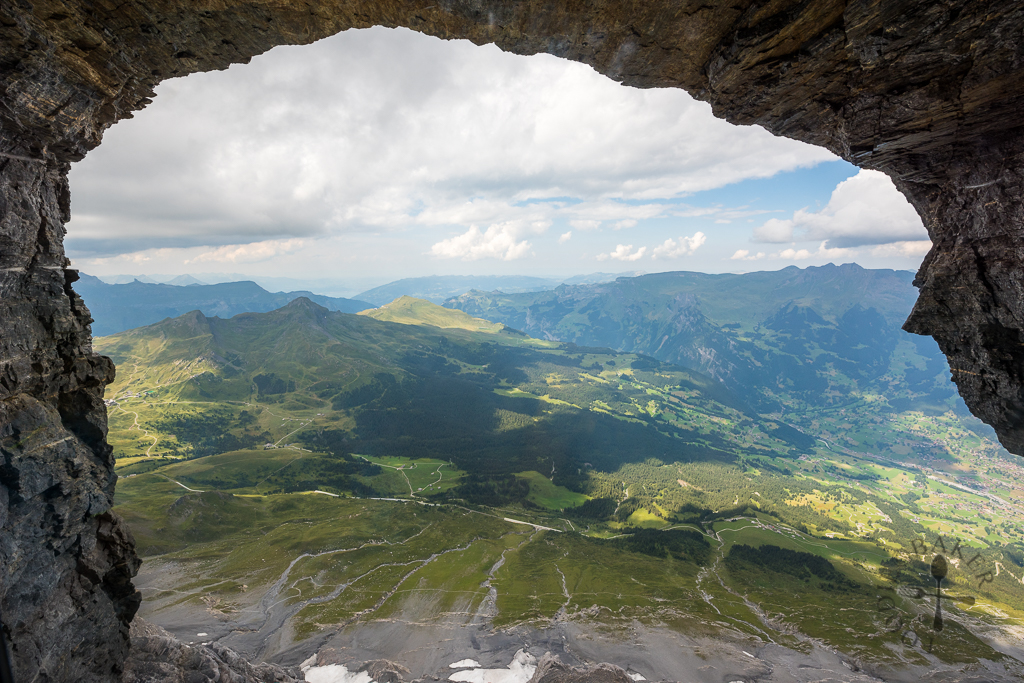 The Jungfraubahn (Jungfrau Railway), a 9.3-kilometre cogwheel train, is Europe’s highest railway station at 3,454 MASL. Construction for the railway began in 1896 and was completed in 1912 with 3 stations, Eigerwand (2,865 MASL), Eismeer (3,158 MASL) and Jungfraujoch. The train departs from Kleine Scheidegg and will stop at Eigerwand and Eismeer for 5 minutes on the way up so that passengers can head down and have a glimpse of the magnificent mountain views along the way up. Sit on the right side on the way up to catch the best views. Do note that the train will not stop at these stations on the way back! 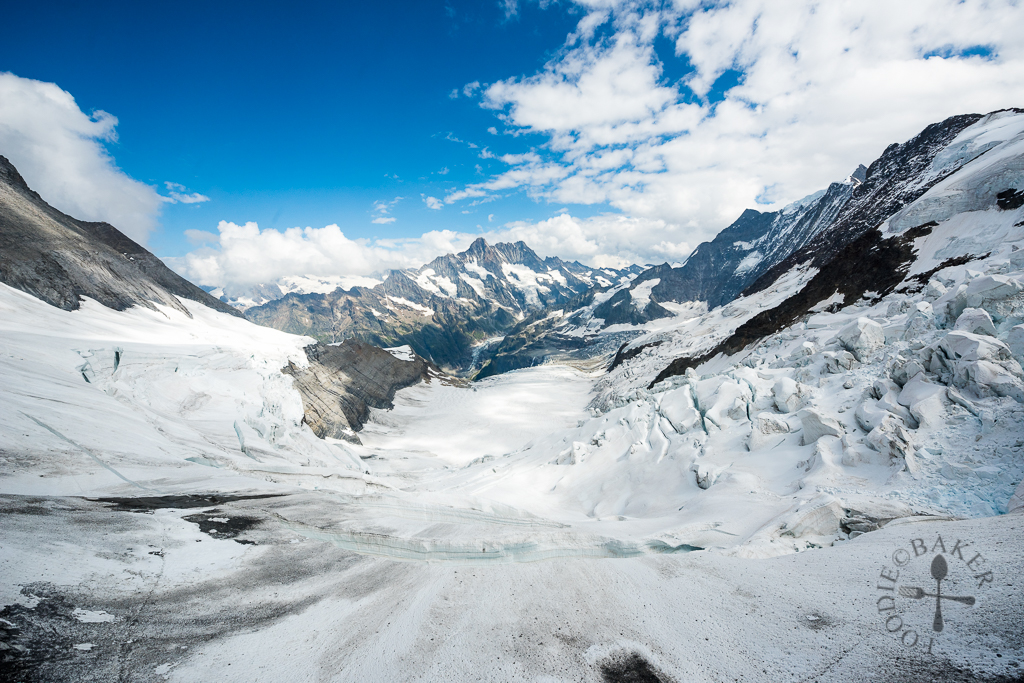 View of the glacier at Eismeer station

I originally thought that there will only be a viewing platform at the Top of Europe Jungfraujoch, and also perhaps a café or a restaurant. Little did I know that there was actually quite a lot of things to do there – we ended up spending a good 2 hours exploring the place! 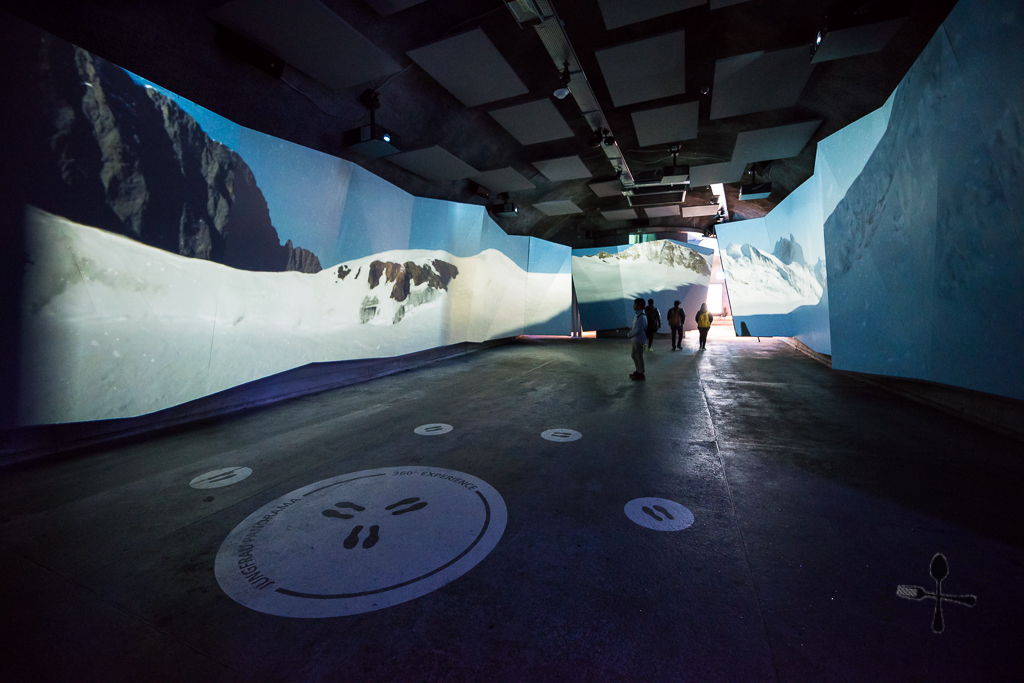 The Jungfrau Panorama 360 Experience was the first thing we passed by after alighting from the train, which featured an audiovisual display of Jungfraujoch and the neighbouring landscape. We didn’t stay long there because we wanted to see the real thing! 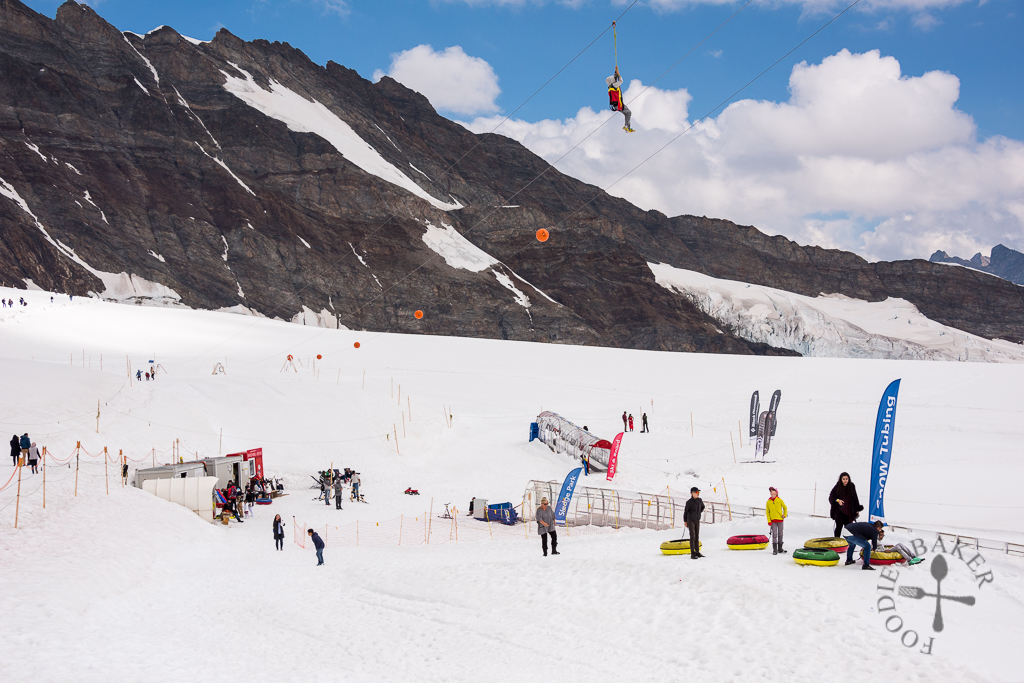 We walked through a short tunnel before we emerged out onto Aletsch Glacier. It was 3 degrees Celsius when we reached so even with our jackets on, it was freezing like hell. However, once we were out, the sun warmed us up tremendously and didn’t feel as cold anymore. There are several fun activities that kids and adults can do at the Snow Fun Park on Aletsch Glacier –  sledging, skiing, snowboarding and ziplining. Do note that you will need to pay separately for these activities.

From the Aletsch Glacier, we could have also hiked to Mönchsjochhütte (Mönchsjoch Hut), which is the highest occupied hut in Switzerland, but we gave it a miss due to time constraint. 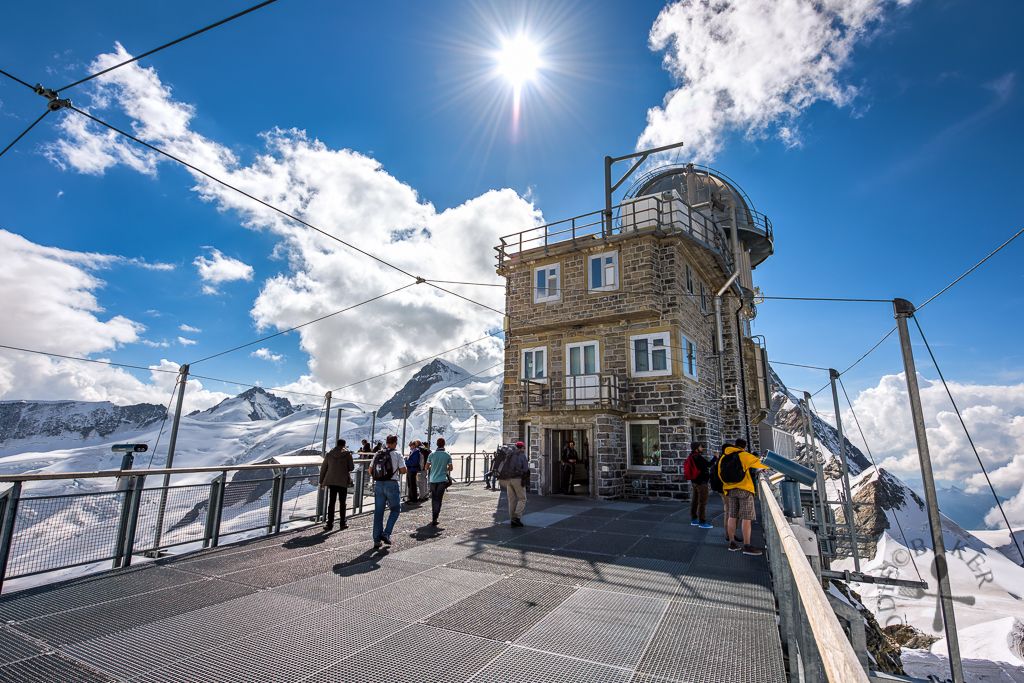 We headed back in and took a lift up (don’t ask me how they built it) to the Sphinx – an observatory and a viewing deck at 3,571 MASL. It’s the second highest observation deck in Switzerland. We walked out to the observation deck to be surrounded by mountains on all sides – it’s such a spectacular and magnificent view that left us in awe. 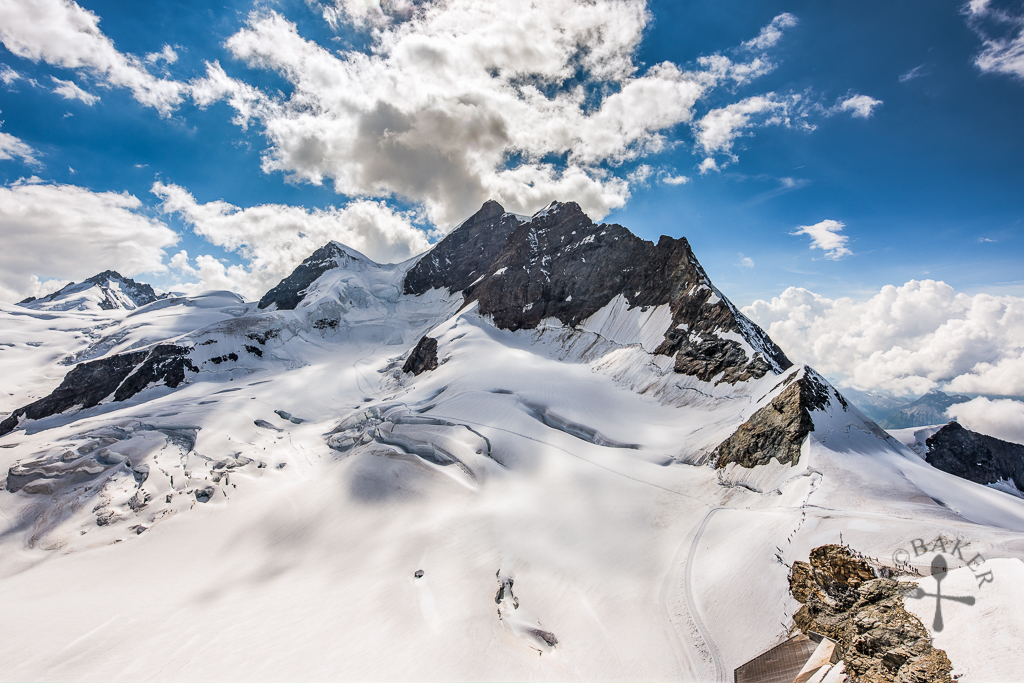 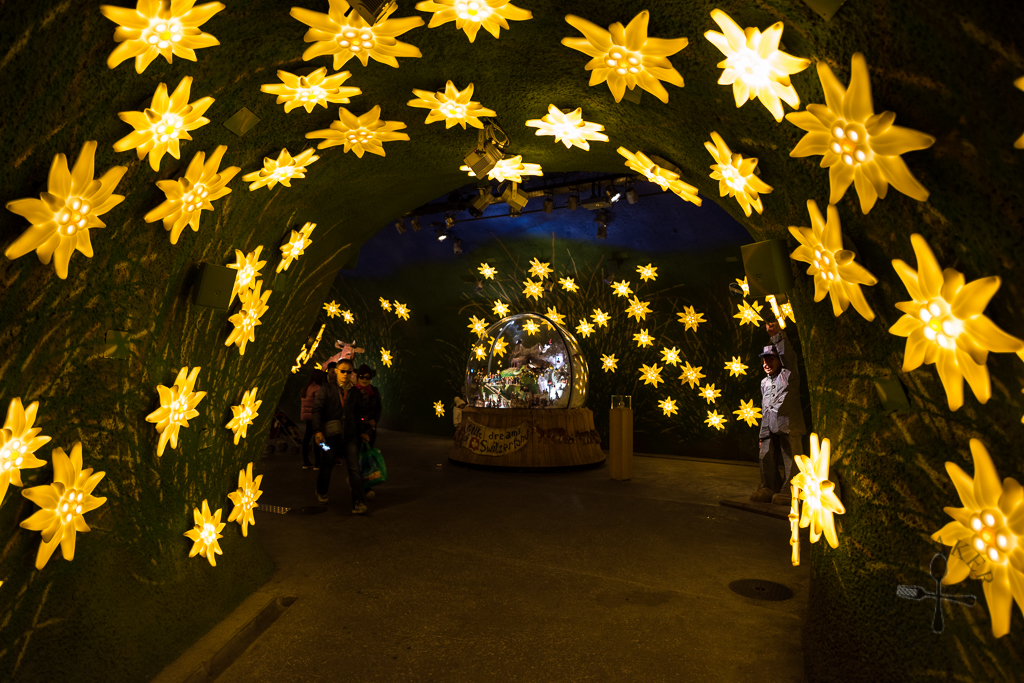 After spending a good amount of time taking photos at the Sphinx, we came down to the Alpine Sensation. It was inaugurated on 1 April 2012 in commemoration of Jungfrau Railway’s 100th birthday. The development of tourism in the alps and the history of the Jungfrau Railway are displayed in this 250-metre long exhibition. There were also a number of interesting wooden sculptures that I couldn’t help taking photos with them (I’m a kid at heart okay! :p) 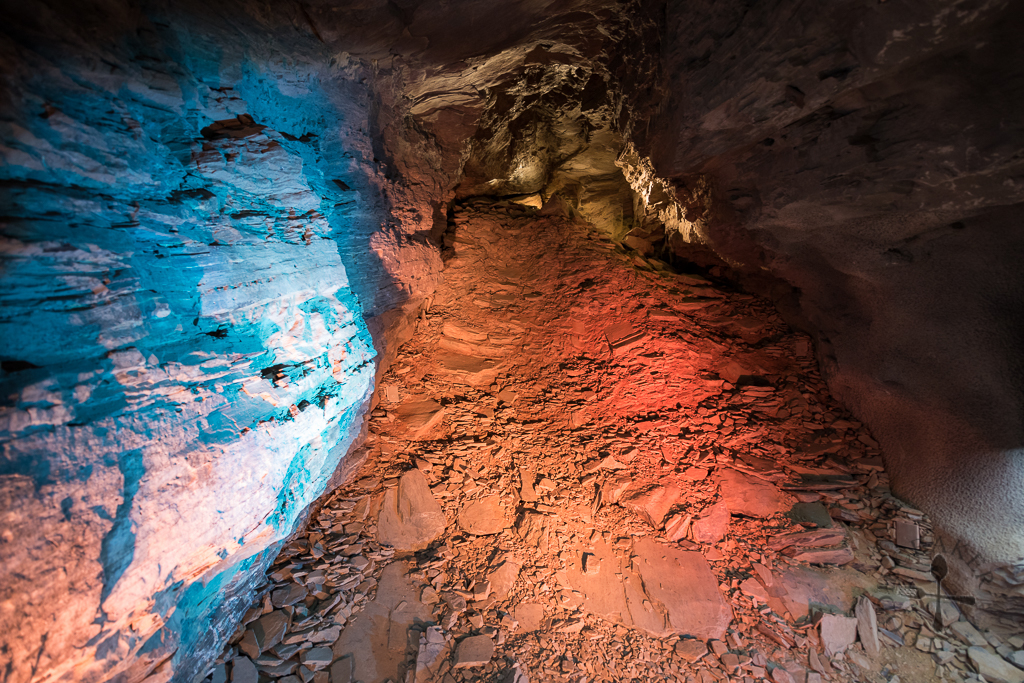 Passed by Europe’s highest-altitude karst cave at 3,482 MASL as we head to the next attraction at Jungfraujoch 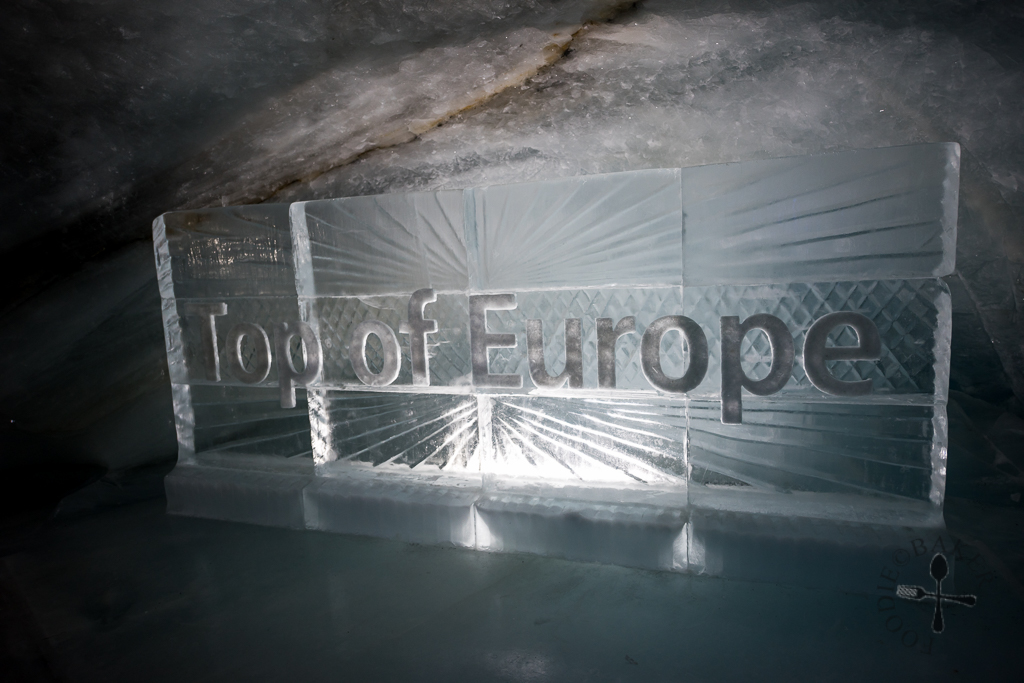 Top of Europe… in ice!

We were freezing as we walked into the next attraction, the Ice Palace. There are a number of cool ice sculptures like eagles, penguins, bears etc inside the palace but we were a tad too cold to enjoy it thoroughly! So we walked one round and quickly head out into the sun again.

Smiling but freezing inside! 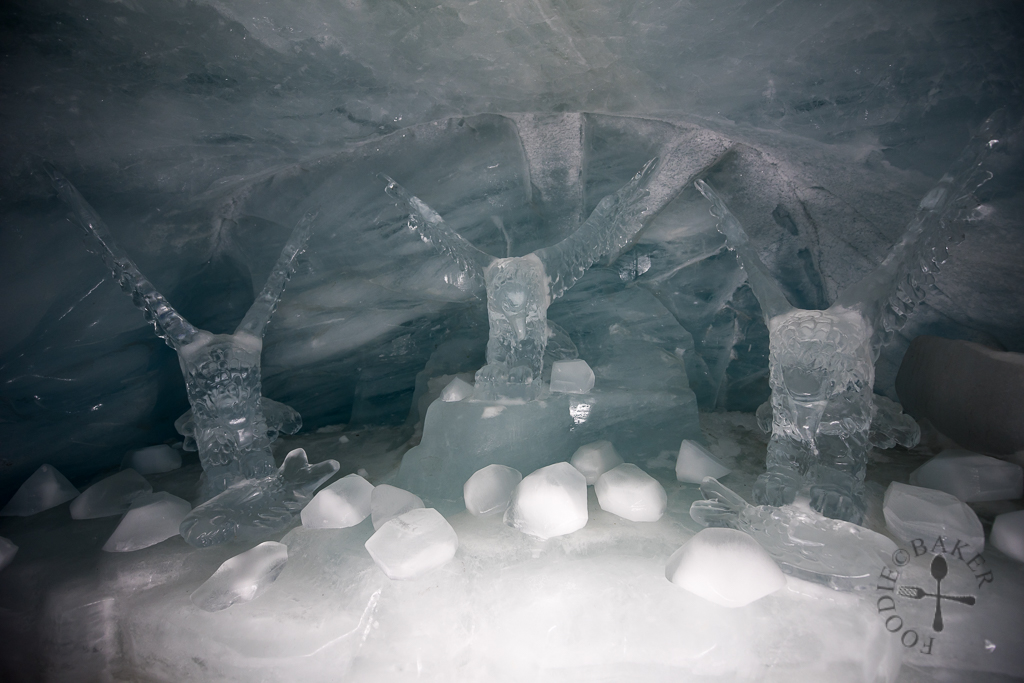 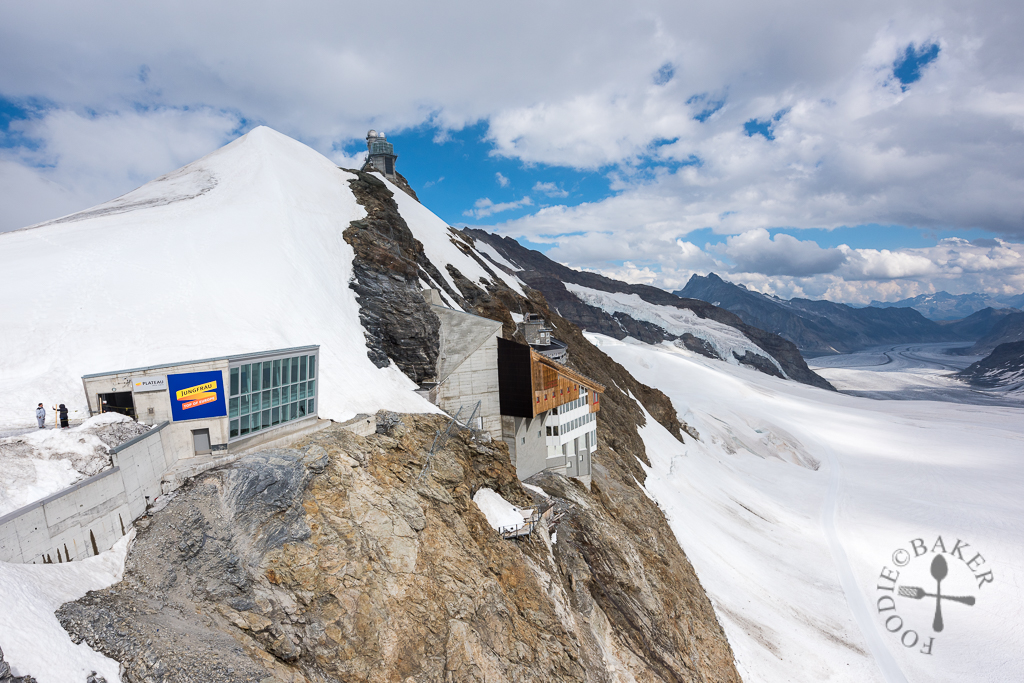 The Plateau is another snowy viewpoint outside the building located on the opposite side of Aletsch Glacier. From there, we could see the main building and the Sphinx Observatory. It’s a truly amazing feat to build all these structures so high up in the alps! 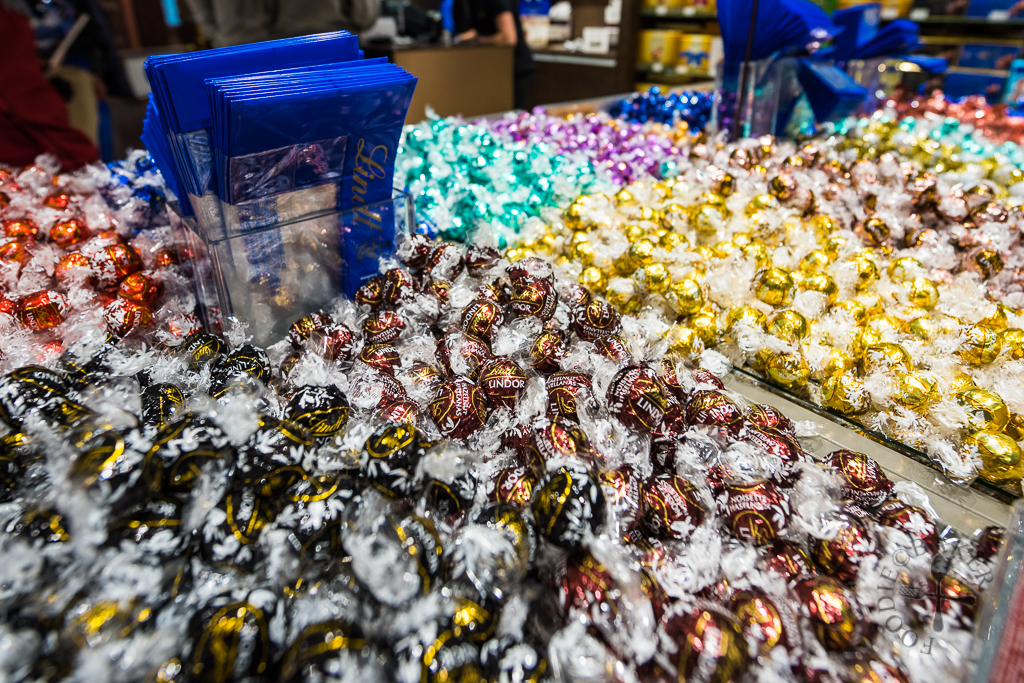 And how can we forget the shopping? The only shopping that interests me is none other than… food! The Lindt Swiss Chocolate Heaven at 3,454 MASL was opened by Roger Federer on 16 July 2014. The huge display of chocolate lured me in and I happily walked out there with a bag of chocolates. The prices of the chocolates at the shop and at supermarkets are pretty comparable, so no harm getting chocolates there! 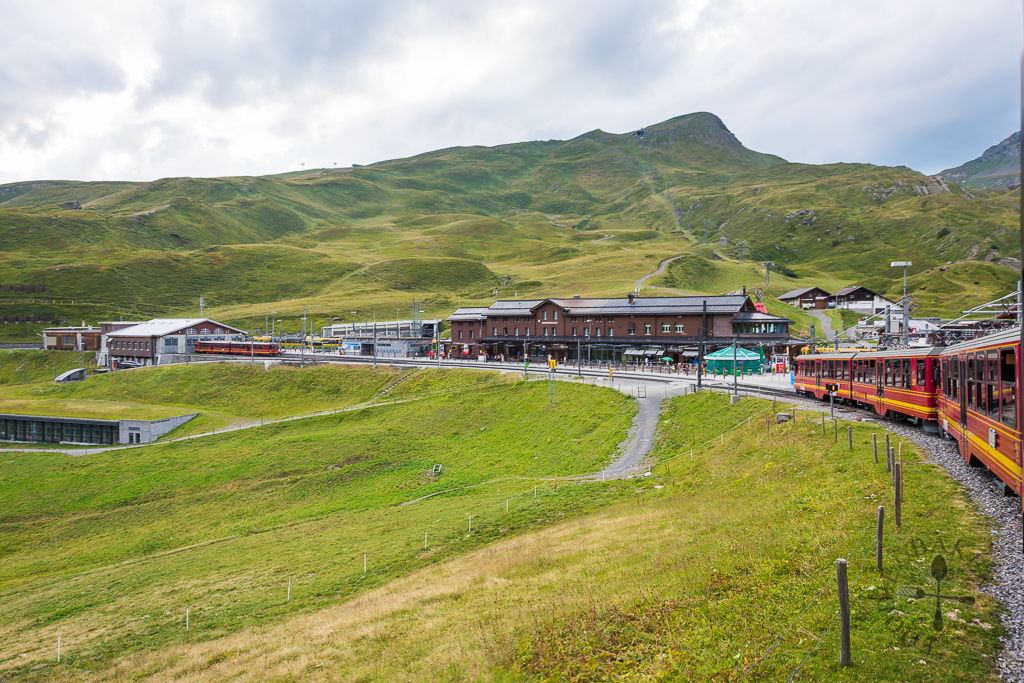 Back to Kleine Scheidegg!

All the attractions at Jungfraujoch are open all year round except for the Mönchsjoch Hut (March to mid-October) and Snow Fun Park Top (May to mid-October), so it’s an experience worth going anytime of the year! Below are 3 tips before heading up to Jungfraujoch:

We didn’t dine at Jungfraujoch as none of the restaurants caught my eye so we thought maybe we could catch a bite at Kleine Scheidegg. When we reached back at Kleine Scheidegg at around 6p.m., there was no time for us to have a meal there or explore much of Kleine Scheidegg as the last train to Wengen leaves at 6+p.m, which was quite a pity. So do start your day as early as possible if you want to have enough time to explore the alps! And that’s it for today’s travelogue!