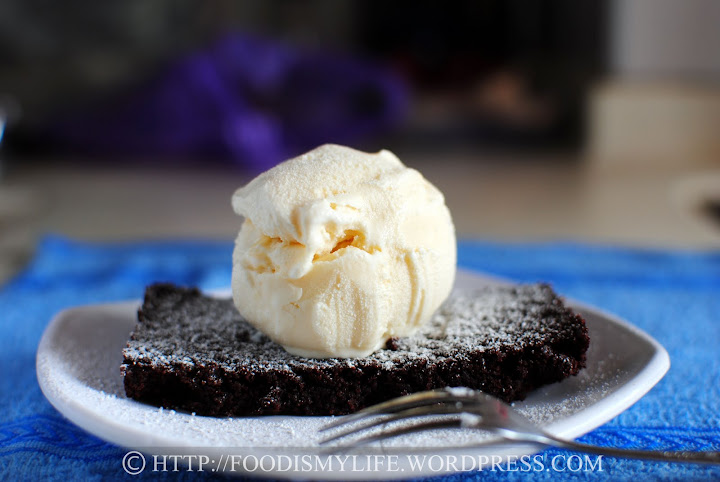 This recipe was first posted in 2009, this is a repost with better (?) photo and improved recipe.

I made a batch of brownies last weekend to participate in the Bake Along hosted by Joyce from Kitchen Flavours, Lena from Frozen Wings and Zoe from Bake for Happy Kids, and realised that I've actually posted about this recipe before back in 2009 (and it's already 2012 now!)

It's cliché to start off by saying, "how time flies"... but I still have to say... time really flies! I started this blog in 2008, when I was still a learning baker with a 3-Megapixels digital camera. Fast forward to 2012, I am now still a learning baker, but now armed with a DSLR and a trusty tripod, a birthday present from X. (: I know my food photography skills still have a long way to go - but I think the quality of the photos are slightly better than before... right??

Well, I digress - so back to these brownies. This brownies recipe is adapted from 500 Chocolate Delights by Lauren Floodgate. The 2009 version contained walnuts and white chocolate, while the 2012 version is just plain old good brownies. I halved the recipe as I'm only baking for X and my family, however, I used the wrong tin, resulting in the brownies to be a bit too flat. Nevertheless, it's still a pretty rich and tasty brownie, but it lacked the ooomph that I was looking for, so I'm still in search for a better brownies recipe... anyone has one? 😀 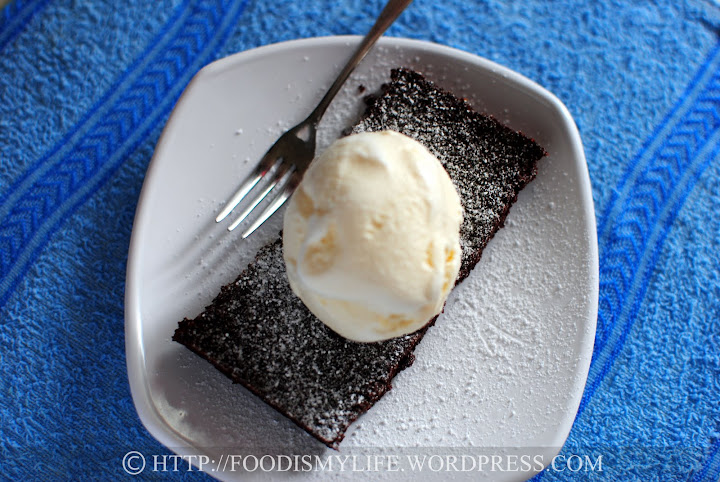 Preheat the oven to 190 degrees Celsius. Grease a 20-cm (8-inch) square cake tin. Line the bottom of the greased cake tin with baking parchment and leave an overhang on two sides (for easy removal of the brownies later).

Pour the batter into the prepared tin and bake for 25 - 30 minutes until the top is dry and the centre is just firm to the touch. The top may crack a little. The skewer-inserted-into-the-centre-of-the-cake test will not be accurate, so it's all about judgement. Place the tin on a wire rack to let it cool completely.

To serve, run a hot knife along the edge of the brownies and use the overhang of the baking parchment to lift the brownies out. Cut the brownies into 8 to 10 servings. Place the brownie on a serving plate. Dust with icing sugar and place a scoop of vanilla ice cream on top. Serve with chocolate sauce.