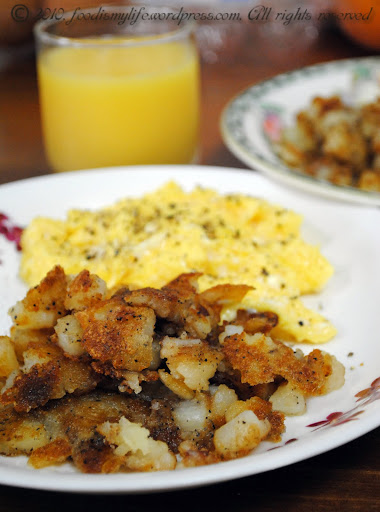 In the past, I would buy factory-made hash browns and bake them in the oven while preparing my scrambled eggs. Recently, however, I decided to make my own hash browns. Well, good quality ready-made hash browns are expensive. They cost like 5 or 6 times more than a bag of potatoes. So I decided to experiment a little on my own and it's surprisingly easy, and I didn't refer to any recipe online (haha yes I'm proud of myself =P)

Unlike a certain fast food chain (which I’m boycotting now) who deep-fries its hash browns, the hash-browns I made are pan-fried – healthier than their deep-fried cousins; plus it’s fresh. Why eat frozen when you can eat fresh, right? (: 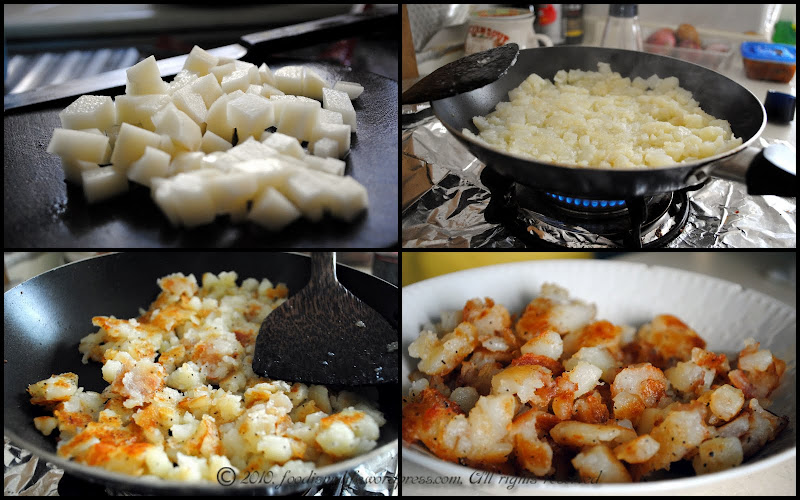 I use the method that is used to prepare my baked fries to prepare the hash browns. However, instead of slicing the potatoes, I diced them into small cubes, roughly 1 centimetre. Russet potatoes work well here because they are really fluffy. Then I boiled the potatoes until they were soft; after I drained them, I returned them to the pot and over low heat, the potatoes were constantly shaken to remove excess moisture – important for crispy potatoes! The dried potatoes were then thrown into a well-oiled non-stick pan and then pan-fried till it’s crispy.

Pair it with scrambled eggs, omelette or anything you like and you are good to go!

In this recipe, there are 2 most important things to take note:

1) The potatoes should be returned back to the pot and set over medium-low heat and stirred constantly until the water has evaporated. This is to ensure that the oil will not splatter when you transfer the potatoes to the hot and oiled frying pan. In addition, drying the potatoes will allow the potatoes to form a crispy skin more easily.
2)Once the potatoes are in the frying pan and sizzling, do resist the urge to keep flipping them. Let them fry on their own so that they will become crispy more easily.

Peel and dice the potato. Transfer the diced potato into a pot and cover it water. Add in a pinch of salt and bring it to boil. Let it boil for 5 to 10 minutes, until the potato is soft. Drain the potato and return it back into the pot and set it over medium-low heat, shaking the pot constantly until the water has evaporated.

In a non-stick frying pan, pour in enough oil to cover the bottom of the pan. Heat the oil up and when it’s hot (but not smoking!), tumble the potato into the pan and spread in an even layer. Do not touch the potato and let it fry on its own, for a couple of minutes until the bottom is golden-brown and crispy. Season the potato with salt and pepper. When it is crispy to your liking, using a spatula, flip the potato to the other side and let it fry until it is browned and crispy.

Remove from pan and serve with scrambled eggs (or anything you like!).

I've remade this hash browns recipe by using an oven instead of a frying pan. Works equally well and they are all gone within minutes! Do the same steps as mentioned above until the water on the potatoes have evaporated. Drizzle in enough olive oil to coat the potatoes with a light layer of oil and season it with black pepper. Transfer the potatoes onto a lined and oiled baking sheet and bake at a preheated oven of 220 degrees Celsius and bake for 20 to 30 minutes, turning several times during the course of baking until the potatoes are golden brown in colour. The reason I used such a hot oven is because the potatoes would most likely be cooked after the boil in the hot water, so I want the potatoes to brown faster without drying out the potatoes too much in the oven, hence the hot temperature (I hope my reasoning is correct and understandable!). 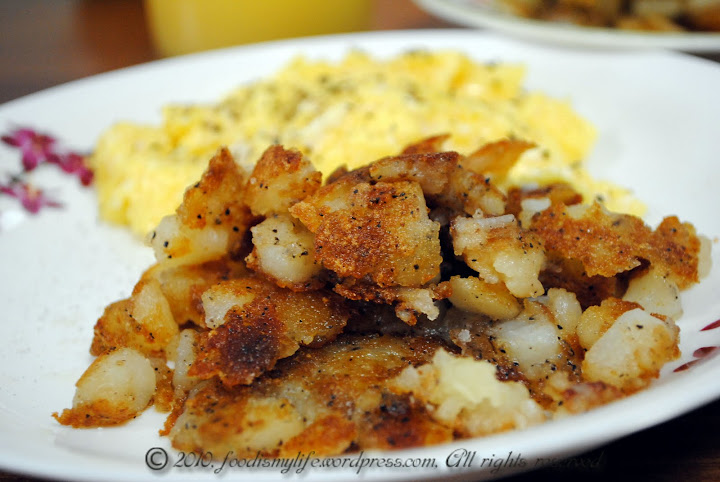