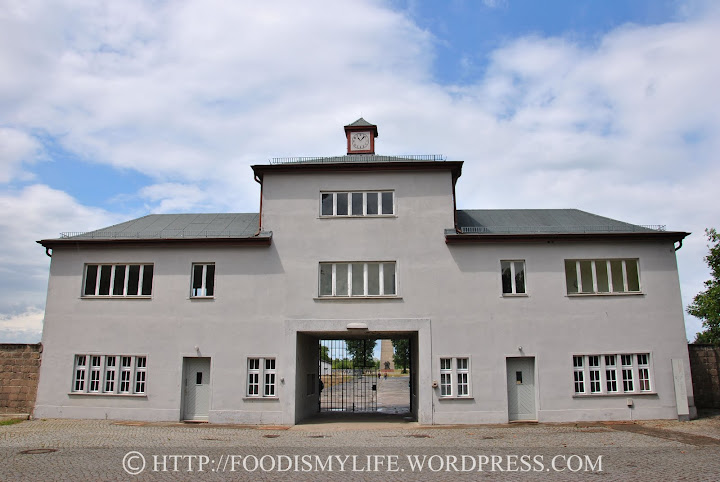 The time on the clock on top of the tower is the time when the camp was liberalized by the Soviet Union.

The Nazis built over 15,000 concentrations camps in Europe during the times of oppression. Generally there are two types of camps - one is a concentration camp (slave/labour camps), the other is known as the "Death Camp". The Death Camp sole purpose is to exterminate prisoners - the prisoners who were sent to these camps are immediately sent to the gas chambers. Most of these Death Camps are found further away from Germany, like in Poland, Ukraine. Slovakia etc. The main reason why these camps are so far away from Germany is because the Nazis wanted to conceal what they were doing from the Germans.

The Nazis built this Sachsenhausen Concentration Camp in 1936. From 1936 to 1945, more than 50,000 prisoners had perished in appalling conditions of brutality and cruelty. When the camp was liberated by the Soviet Union in 1945, they used this camp and captured many political prisoners - and the death toll continued to climb until it came to an end in 1950.

Sachsenhausen Concentration Camp was primarily a labour camp, though it had an extermination center. This camp held an important significance because it was the model camp for other concentration camps.  The camp perimeter forms an equilateral triangle and the main gate (above photo), known as the Guard Tower "A", sits in the middle on one of the sides of the triangle. It allowed the Nazis soldiers to keep an eye on the prisoners because they were able to have a good view of the whole camp because of the triangle design.

There was, however, a breach to this triangle design in the coming years because due to the huge inflow of prisoners (particularly the Jews), the Nazis expanded the camp to accomodate more prisoners.

The camp was mainly guarded by the SS - Schutzstaffel, which is also known as the protection squad for the top leaders in the Nazis.

In 1961, the communists opened up this camp as a memorial site. However, the camp was used as a propaganda tool because the memorial site was focused heavily on the communist leaders who died in the hands of the Nazis. There was no mention about the deaths of the Jews, the homosexuals and other prisoners who were persecuted in this camp. It was only until 1990 when East Germany and West Germany reunited that they re-did the memorial sites to ensure that the deaths of other prisoners were not overlooked.

(Ok this is a really, really long history about this camp... So, lesser words for the next few photos!) 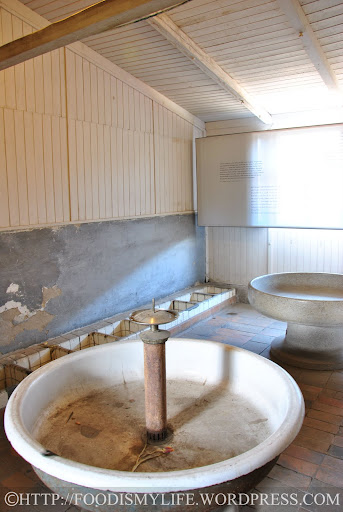 Each morning, the prisoners would have only 30 minutes to wake up, receive their rations and wash up in this tiny little room. Up to 400 men would squeeze into this room sometimes to wash themselves. During winter, they didn't even get warm water to wash themselves with. 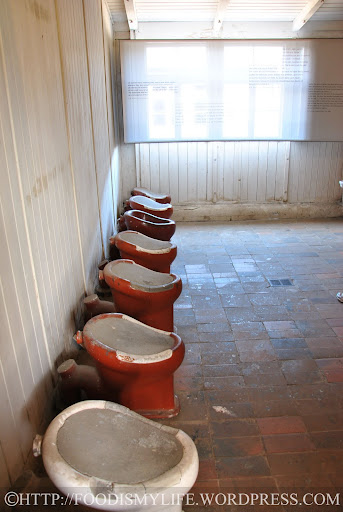 We learned from our guide that the prisoners could only use the urinals in the morning and evening after roll call, and occasionally also during the midday break. Many times, because the whole room is crowded with prisoners, the sick, weakened or older inmates fell down during the rush and were often trampled on by others and remained on the floor covered in excrements. 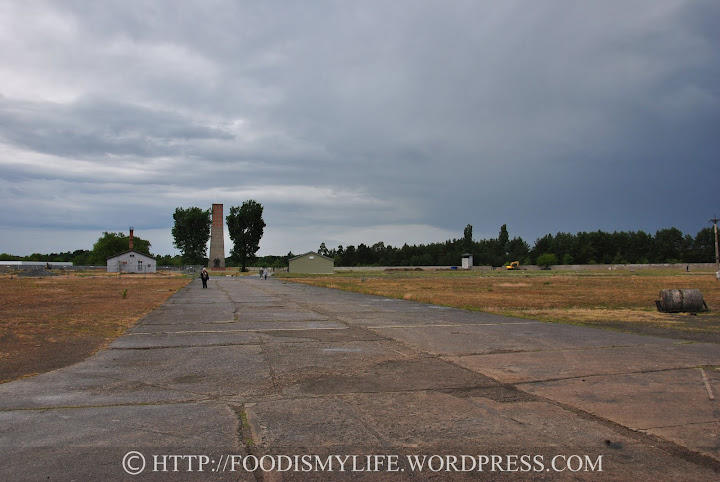 This was the place where the prisoners would do their roll call - rain or shine, unbearably hot summers or killing winters. It was plain torture because sometimes roll call could carry on for hours. If one prisoner was missing (even those that died in their barracks), the remaining prisoners were forced to stand and wait until the missing person is found and this could last the entire day and through the night. 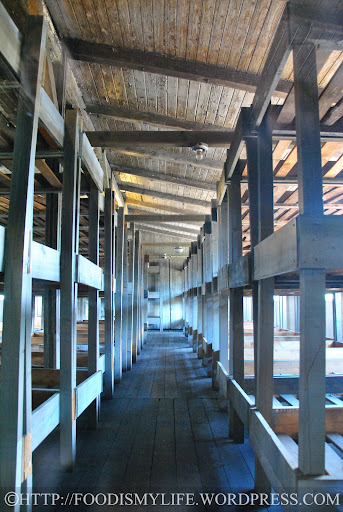 With poor insulation against the cold and poor ventilation, the Nazis tried to solve the problem of overcrowding by building triple bunk beds. 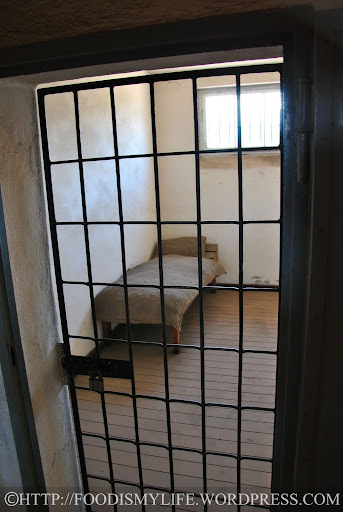 This prison cell (along with many others) were built to house mainly political prisoners - prisoners whom they wanted to torture, kill or drive to suicide away from the eyes of other prisoners.

The SS also used the cell block to confine important figures such as Martin Niemoller, a well-known theologian, and Georg Elser, who had tried to blow up Hitler. 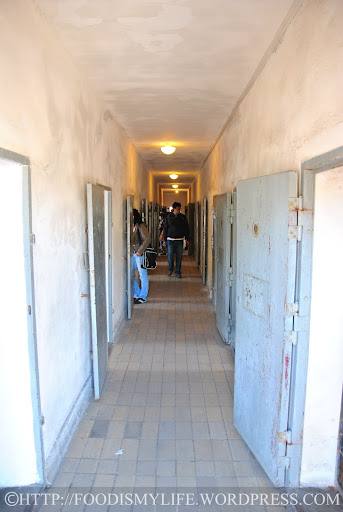 The cells that the SS used them for punishments, interrogations and confining prisoners 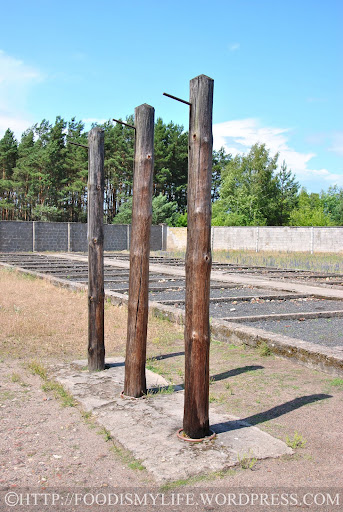 The prisoners were being treated with extreme cruelty and brutality. This was a tool used for torture - the SS guards would tie the prisoners hands behind them and hang their hands onto the poles (where the metal stick is sticking out on top). The SS guards would then pull the prisoners' bodies, dislocating their arms in the process. It was really cruel and many didn't survive the torture. 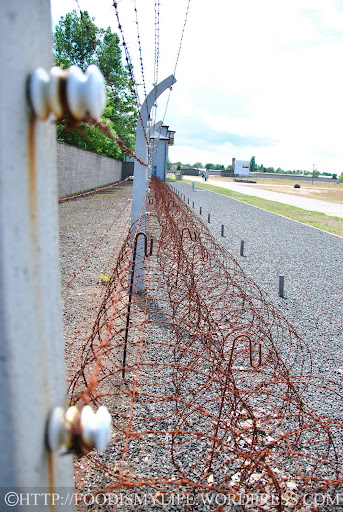 The electric fence and the gravel death zone that kept the prisoners in the concentration camp. 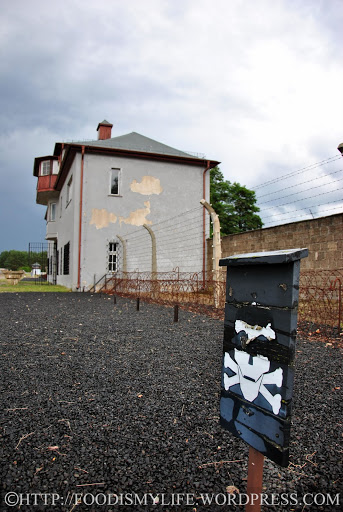 Besides using electric fence to deter the prisoners from escaping, the Nazis also established a gravel death zone - if a prisoner walked into this gravel filled area, even by accident, they would be shot dead without warning. Often prisoners who couldn't take the conditions of the camp any more would walk into this area, prompting the SS guards to shoot them dead. However the SS guards realised this and only shot them at their legs - the shot prisoner wouldn't be able to get out of the gravel zone themsevles and other prisoners would not dare to step into the gravel zone to help the shot prisoner for fear of getting shot themselves. Hence the prisoner would be left to bleed to death. 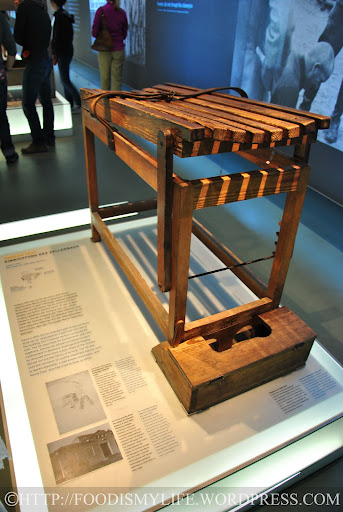 There was an exhibition in the kitchen (if I didn't remember wrongly) where we saw the different tools used in the concentration camp. This tool was used for canning. The prioners would bent over the "bench" and would be tied up with the belts on the bench before the SS guards would lash at them. 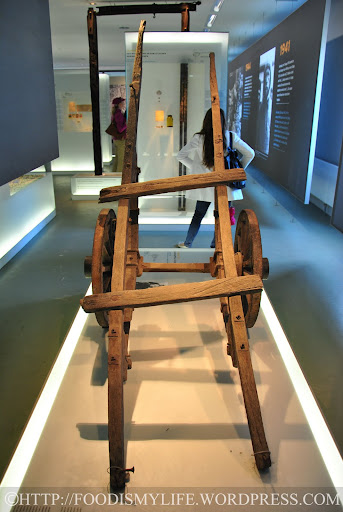 Wheelbarrow for transporting corpses by the prisoners 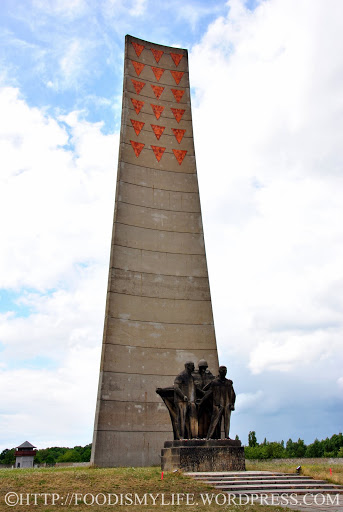 As mentioned earlier, the Soviet Union liberated the camp in 1945. They erected this statue to honour the soldiers who liberated the camp from the Germans. However it became NKVD special camp Nr. 7 under the Soviet control where at least 12,000 had died of malnutrition, disease and torture during the 5 years of operation. 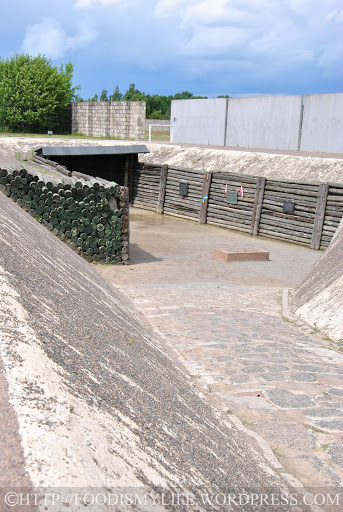 This execution trench was built further away from the barracks - and as the name suggests - it's where SS guards executed the prisoners.  The screaming and struggling of the prisoners sometimes did take a toll on the SS guards as they have to face the prisoners when they shoot them. Thus, the Nazis came up with Station Z. 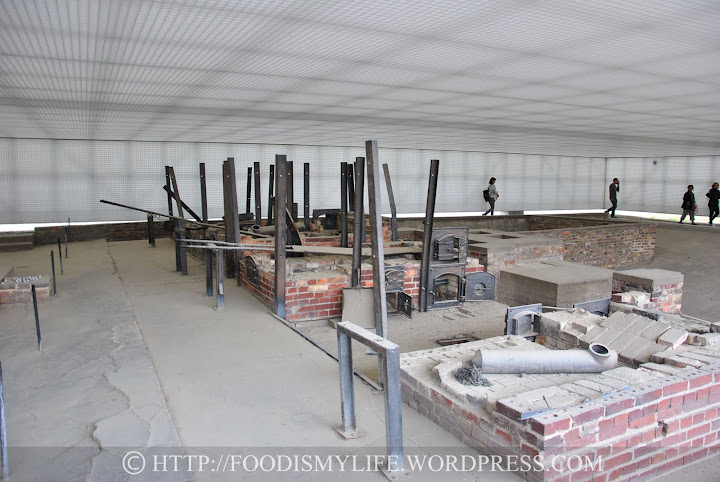 Station Z consisted of a gas chamber, a small firing room, and four ovens used to cremate the dead bodies. Becaues the killing of so many prioners had taken a toll on the SS guards (it affected them emotionally and psychologically), the Nazis devised a way to kill the prisoners without having the SS guards to look athe prisoners in their eyes.

The prisoners were brought here and being told that they would be getting a new set of uniform/medical examination hence measurements need to be taken. Unknowingly, the prisoners would line up against the measuring stick to allow their height to be taken. What they did not know was that there was a small rim (or a small window) that can be opened up. An SS guard was waiting in the next room and all the SS guard would do now is to hold up a gun and shoot the prisoner in the head, killing him instantly. This method allowed the SS guards to not have to face the prisoners directly and it was a less messy scene whereby the prisoners would not be running or struggling.

The prisoners had entered the camp through 'Tower A' and now they were to leave the camp - dead, via the cynically named 'Station Z'. 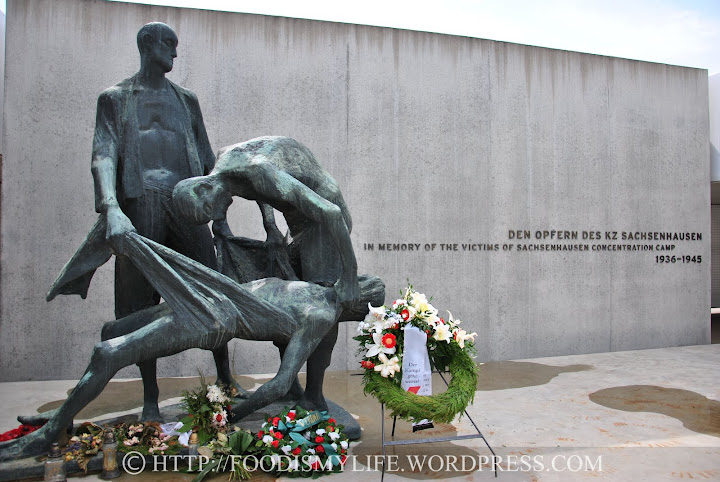 It depicts two inmates, one standing and one bent over, holding a cloth that supports the corpse of a comrade. 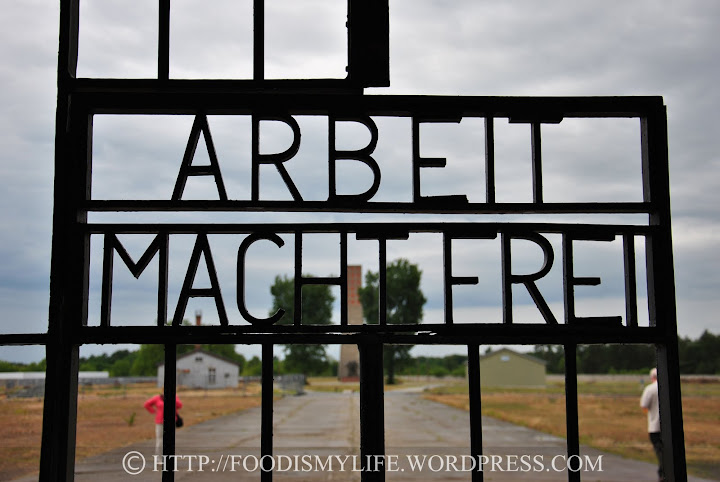 Every prisoners would see this phrase upon entering the concentration camp - it is located at Tower "A" on the gate itself, but I choose to put this photo here because of the bitter irony.

It was a false promise by the Nazis to the prisoners that working endlessly and tiredlessly would eventually allowed them to be released. Most of them weren't released but they did attained freedom in another way - death.

I'm very lousy at words hence I don't know how to quite place how I actually felt when I was at the camp. It's a mixture of several emotions: anguish, sadness, anger and shock. I think it was a really informative tour and I highly recommend one to go for a tour or a visit to such camps and learn about the terror, the cruelty and the brutality behind these bars.

In case you're interested, we went on the walking tour organized by Sandemans. It's not a free tour, if I didn't remember wrongly, it costs 12 Euros per person, excluding the price of the train ticket that you'll need to get (which is an ABC train ticket because the camp is 35 kilometers North of Berlin). The guide brought us from Brandenburg Gate to the place itself (I think it's a 45-minute - 1 hour train ride).

If going there by yourself, just take a train to Oranienburg station, which is the last stop on the line. The S-bahn (S1) goes there. It's a 20 minute walk from the train station to the memorial. The place is actually free, but you wouldn't want to go there without knowing the history, so it's good to rent an audio guide. But ours was a guided tour, so we didn't need the audio guides.

Check out this website for more information on getting there!