These little things look very much like choux pastry right? Indeed they are! Just that they are savoury cousins of the sweet ones, known as gougères.

Gougère is a savoury pastry made using pâte à choux mixed with cheese Originated from Burgundy, France, this little pastries are traditionally made with Gruyère, Comté, or Emmentaler. When planning my to-bake menu for August, I decided to attempt a savoury choux to submit it to the choux party that I'm hosting. I used my favourite choux recipe and made some additions to it - parmesan, bacon and parsley. The resulting gougères had a very nice, sharp and salty cheese and bacon taste - and paired with their slight crispy exterior and soft interior, they made wonderful appetizers, snacks and tea time treats (if you aren't a sweet-tooth)!

However, the taste of parsley wasn't very noticeable - perhaps using more parsley or the dried ones or a stronger herb would be better! The gougères also lost the battle against humidity after a few hours sitting at room temperature so the exterior became soft but they were still pretty good (in my opinion... haha) But of course they could use a quick trip to the oven to be re-crisped! My mom was surprised to find that the inside is hollow - she hasn't heard of gougères so she thought it would be something like a doughnut heh. On the other hand, X was actually hoping that I filled the gougères but I was feeling lazy haha. I originally intended to make a tuna-egg-mayo mix for the filling but the plan went down the drain due to my laziness. Haha. Well there's always next time!

I have posted the step-by-step photos for a basic choux recipe here, so I'm just gonna show the additional steps! 3) Scoop mounds onto a baking sheet.4) Brush with egg wash and bake away!

I'm submitting this to Aspiring Bakers #34: Choux Pastry hosted by me! There's only about 1 ½ weeks left to the end of the event, don't forget our dateline is 31 August 2359 hours (Singapore Time aka 1559 hours in GMT - see time zone converter here)!

I'm also going to submit this to Little Thumbs Up organised by Doreen from my little favourite DIY and Zoe from Bake for Happy Kids. This month's theme - Egg - is hosted by Yen from Eat your heart out. The recipes are all linked at this post! 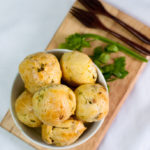