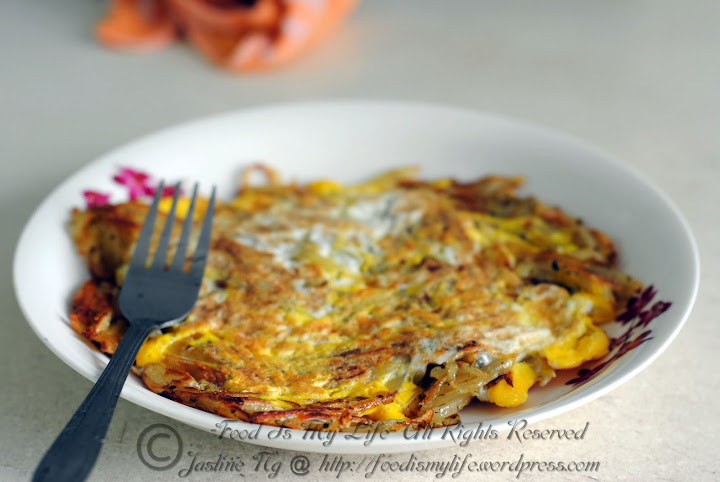 One dish that I love to make with potatoes and eggs is Rösti. Rösti originates from Switzerland and was originally served as breakfast as a main dish. Today, it is consumed by many people all over the world. Most restaurants I’ve been to (for those who do serve rösti) in Singapore serve rösti as a side to accompany other dishes. I’ve never seen Rosti being served as a main dish!

It is not a difficult dish to make and it is so economical! You’ll only need one huge potato and one egg per person. Think about how much you can save! (One plate of rösti usually costs SGD$6-$7, and serves only one to two person)

Please try making this at home, I’m quite sure you won’t regret it! 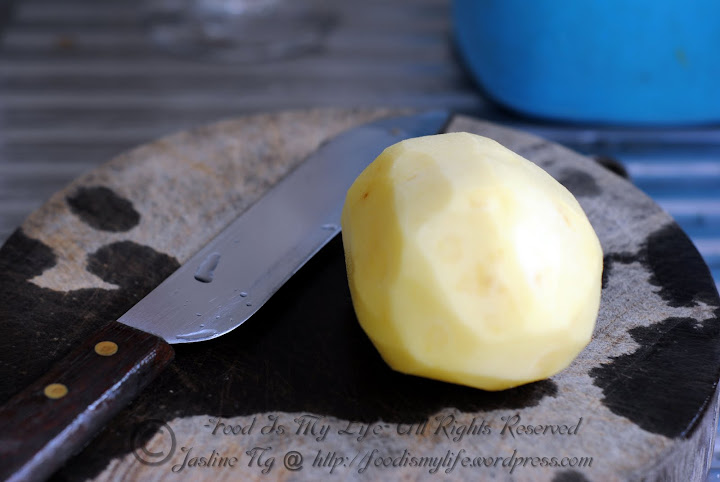 Grab a huge potato. I love to use Indonesia potatoes because they are not so starchy and will not give the floury texture after they’re cooked. I avoid USA potatoes whenever I make my rösti. They just don’t turn out right whenever I use them ): 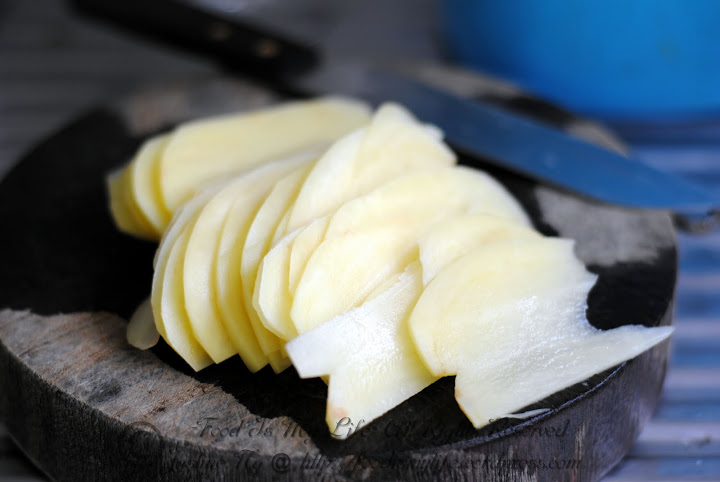 Most websites will tell you to grate the potatoes. I tried it, and I hated it. The potatoes became very mushy and watery and ewwww. You’ll need to squeeze out the water from the potatoes before you cook them otherwise the rösti won’t be good. And in order to squeeze the water, you’ll need a cheesecloth or tea towel or something that can drain the water – too troublesome in my opinion (because more things to wash!) So what I always do is I will slice them into thin strips, using a sharp knife.

Some recipes use cooked potatoes instead of raw ones. I haven’t tried the difference, so I’m not sure, but I won’t want to go the extra step to cook the potatoes first, because the thin strips of raw potatoes cook quite fast too. 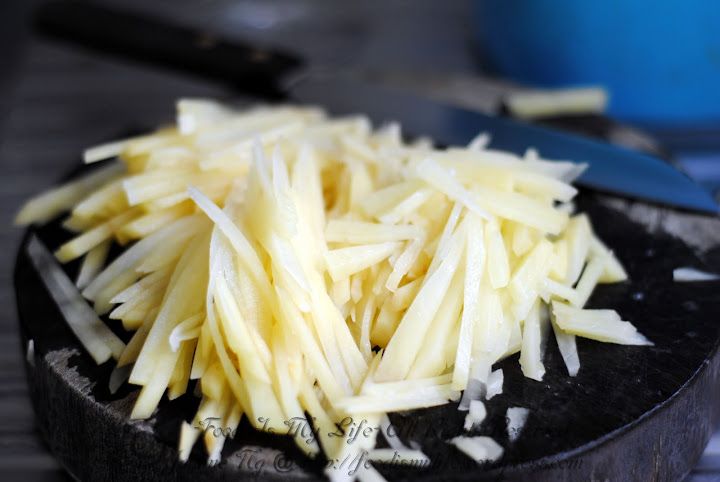 You’ll need a sharp knife for the job. It definitely requires more effort to slice with a knife than to use a grater, but it helps to train your knife skills! (: 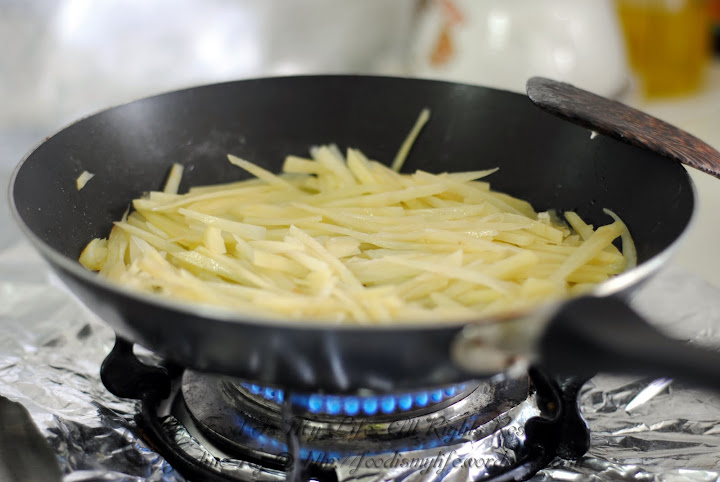 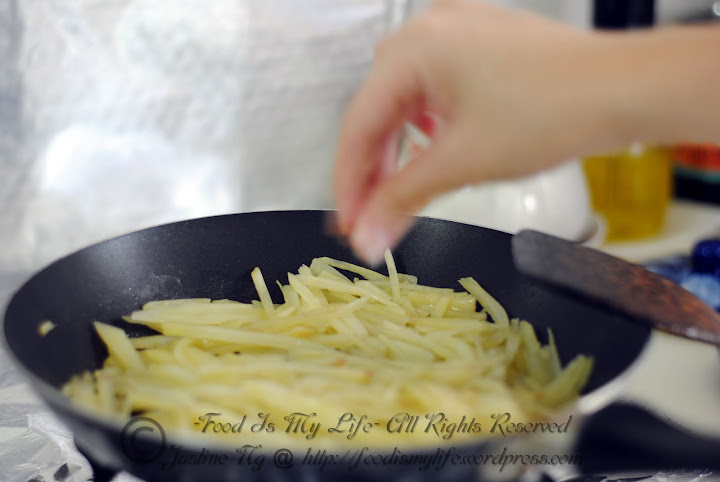 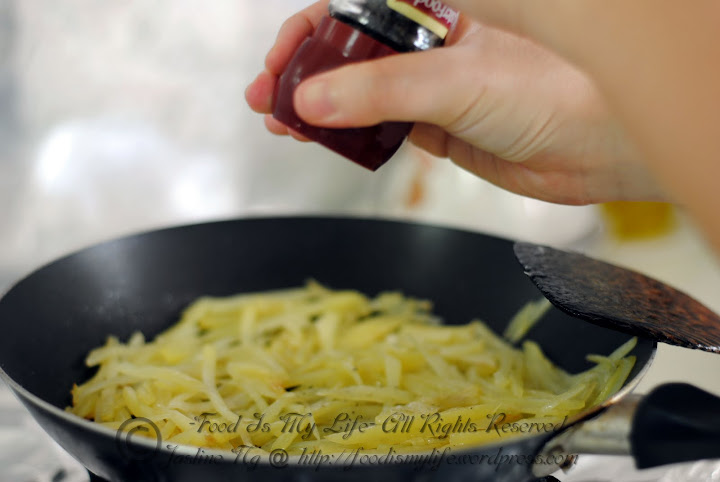 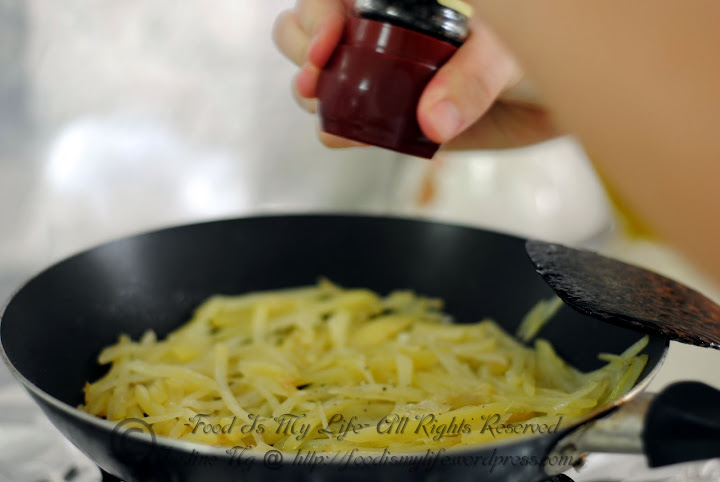 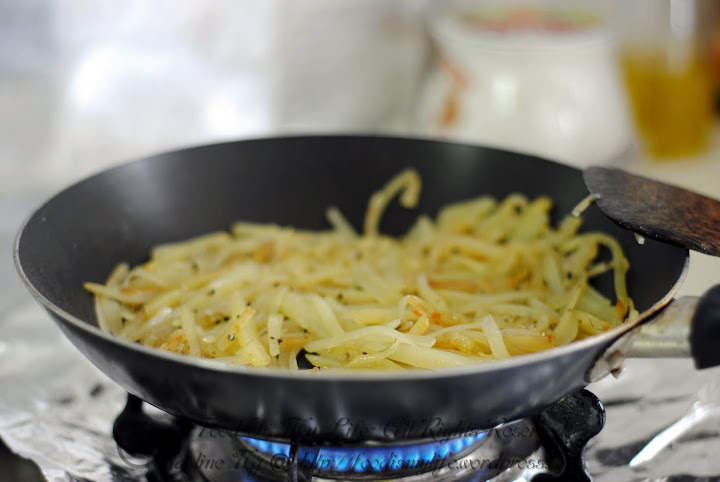 Don’t touch it even if you’re very tempted to! We want to get the golden brown crust! 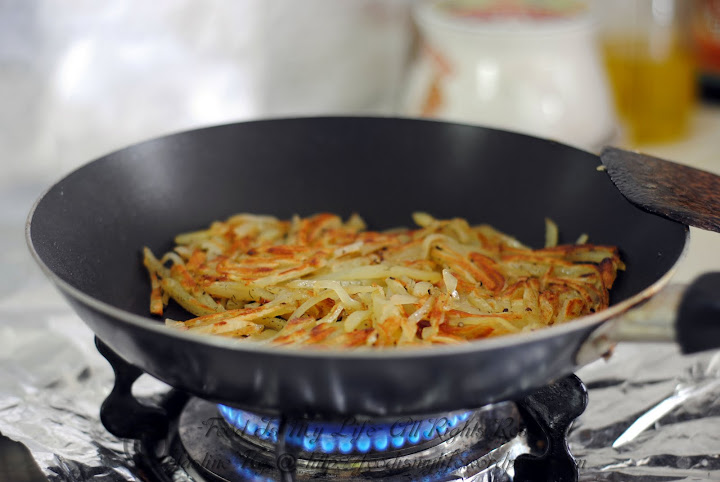 The potatoes will shrink a little bit. It’s normal! (: 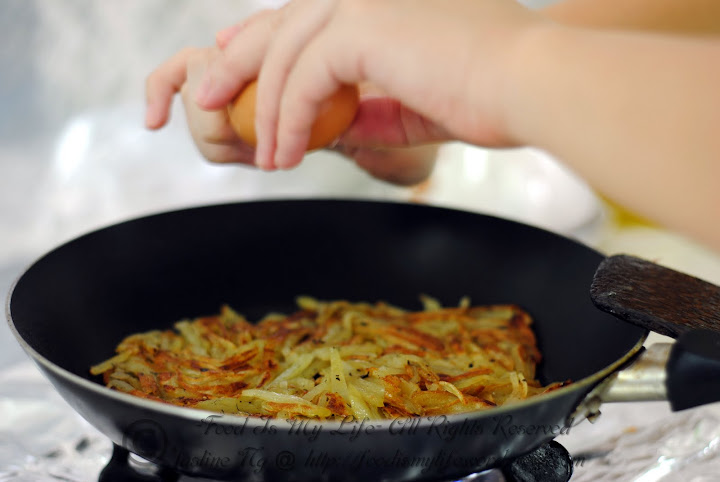 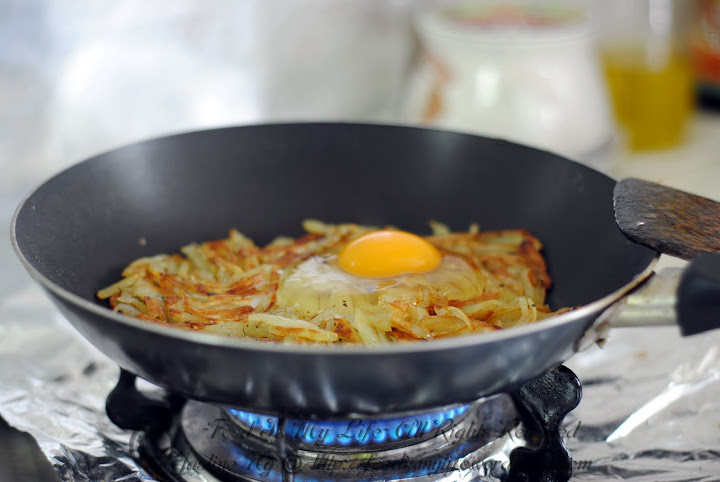 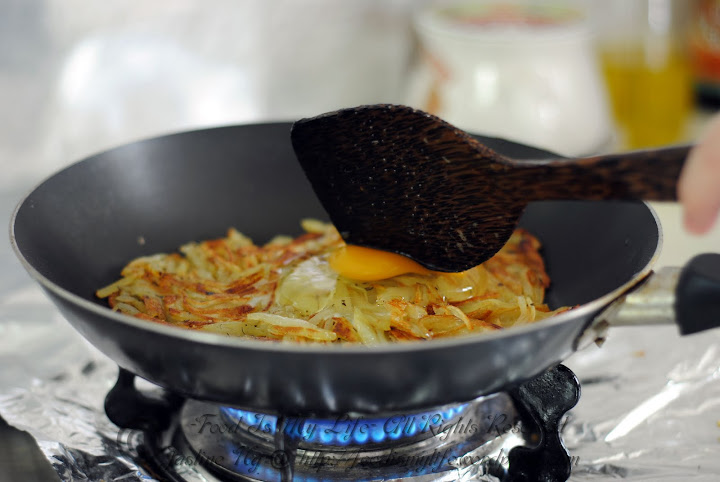 But I don’t want runny yolk this time, so I break the egg yolk… 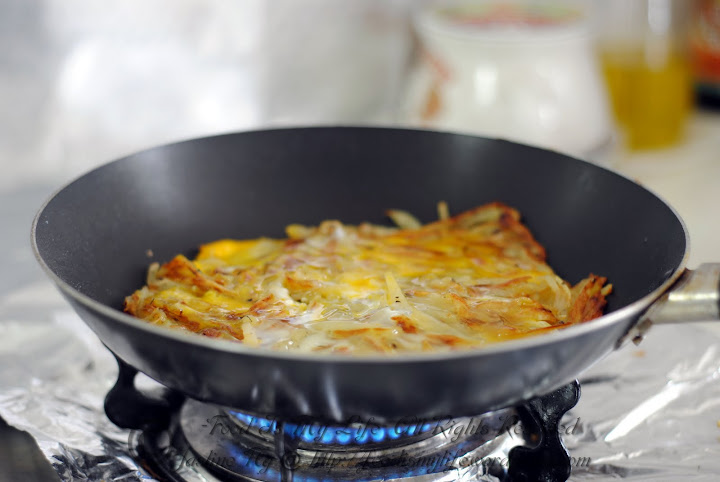 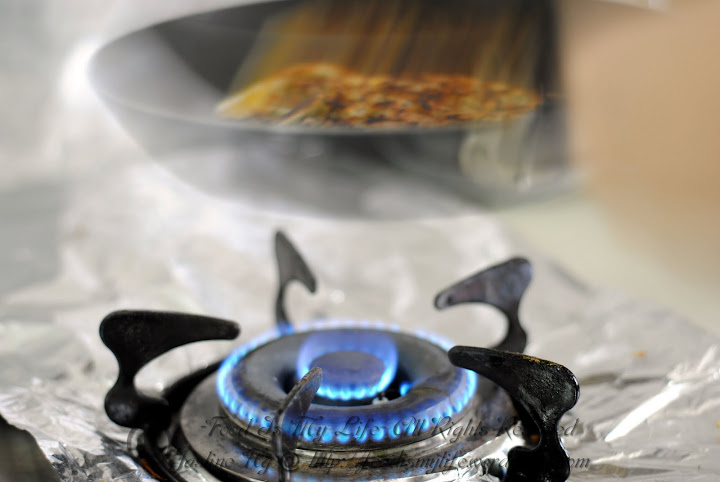 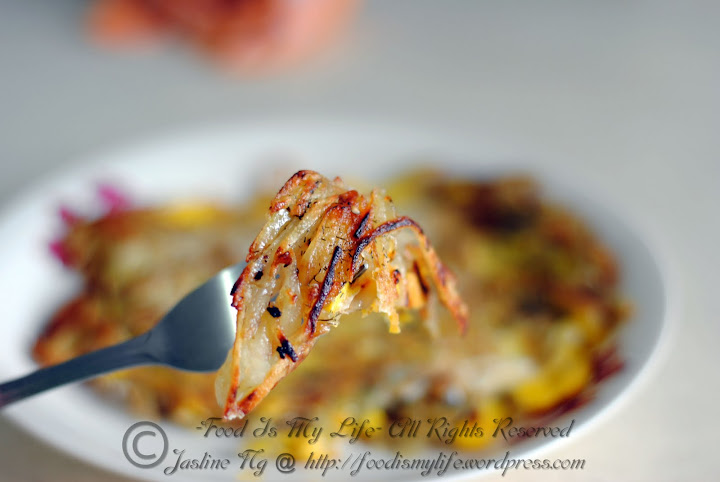 Oh dear, I’m so craving for some rösti right now! 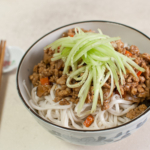 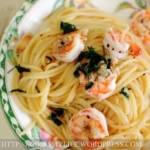 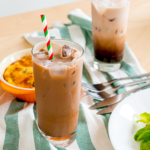 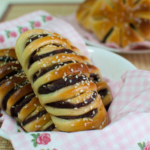 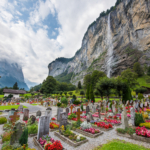 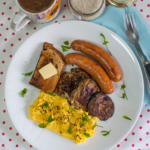 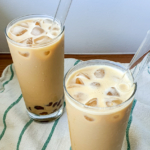