These asparagus pork rolls are made by wrapping thin asparagus with shabu shabu pork, pan-fried till golden and finally glazed with an easy homemade teriyaki sauce. Add a seaweed soup to complete the meal.

I've previously shared these asparagus pork rolls on my Instagram (@foodiebaker). But I recently remade them with step-by-step photos and decided to document the recipe here for ease of reference. It's definitely easier to search the blog than trying to scroll through looking for old Instagram posts.

I was inspired to make this when I first saw a YouTuber making pork rolls using zucchini. I replaced the zucchini with baby asparagus so there's lesser chopping involved. Baby asparagus are also known as fine asparagus in supermarkets in Singapore. Basically you want the thin variety so that they cook faster.

The teriyaki sauce is a made using soy sauce, honey, mirin, sake and water in equal ratio. I added just a little bit of sesame oil for that sesame flavour but it's completely optional.

I love these asparagus pork rolls as they combine meat and vegetable in one dish. All I have to do is whip up a soup or an egg-based dish and I'll have a complete meal! 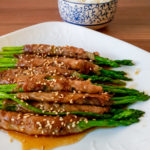