This is probably the most "cheaterbug" cream cheese brownies I've ever made. I love the fact that I don't have to make 2 batters - just one chocolate brownie batter, with delicious and rich cream cheese slices sandwiched in the middle. Pure indulgence! The only thing is that I found the brownies a tad too flat, I wish it had a more chocolate to cheese ratio... I used egg whites instead of whole eggs as I want to use up the egg whites, just like my egg white brownies.

I love the brownies when they are very chilled! It's also a lot easier to slice them when they are chilled. Give this recipe a try if you are craving for some delicious chocolate and cheese combination~!

I'm submitting this to Bake-Along hosted by Zoe from Bake for Happy Kids, Joyce from Kitchen Flavours and Lena from Her Frozen Wings! The roundup will be at the end of the recipe, click to see what their versions of this cream cheese brownies!

I'm also submitting this to Cook Like A Star (2nd anniversary special!), hosted by Zoe from Bake for Happy Kids, Joyce from Kitchen Flavours and Mich from Piece of Cake! 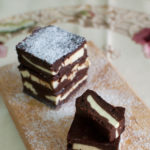 - Adapted from Nigella Lawson's How to be a Domestic Goddess
Tried this recipe?Mention @foodiebaker or tag #foodiebaker!
Super Naggy:
Homemade Double Boiler
An InLinkz Link-up