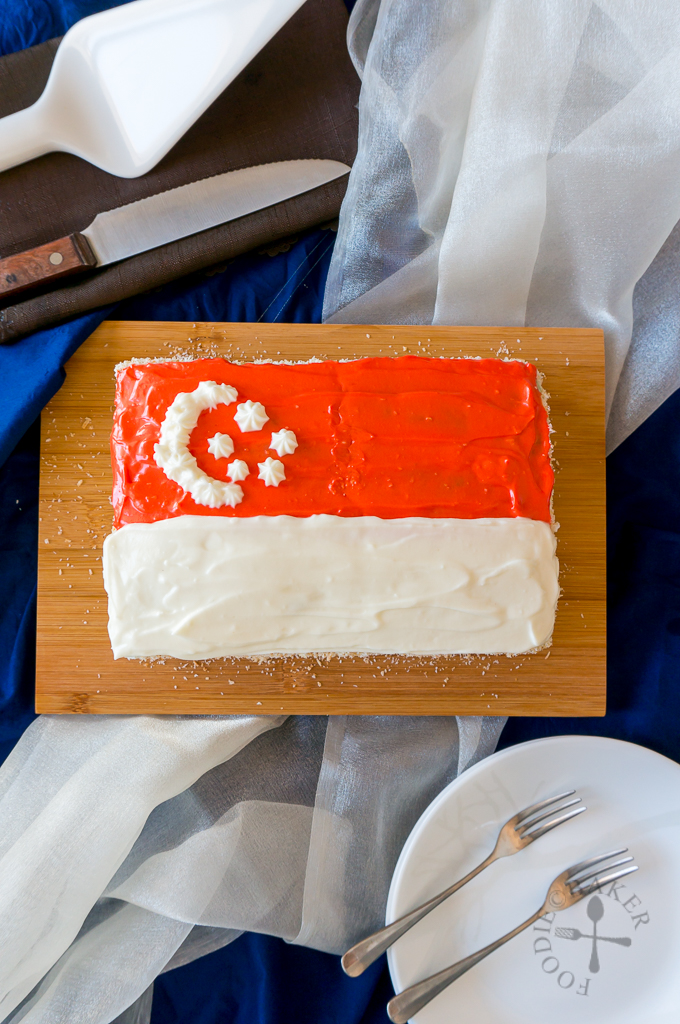 A fragrant and moist pandan-coconut cake filled and frosted with a delicious and creamy cream cheese frosting, with the sides covered with toasted dessicated coconut and the top decorated into the flag of the country that I grew up in - my way of wishing Singapore a happy 50th birthday! 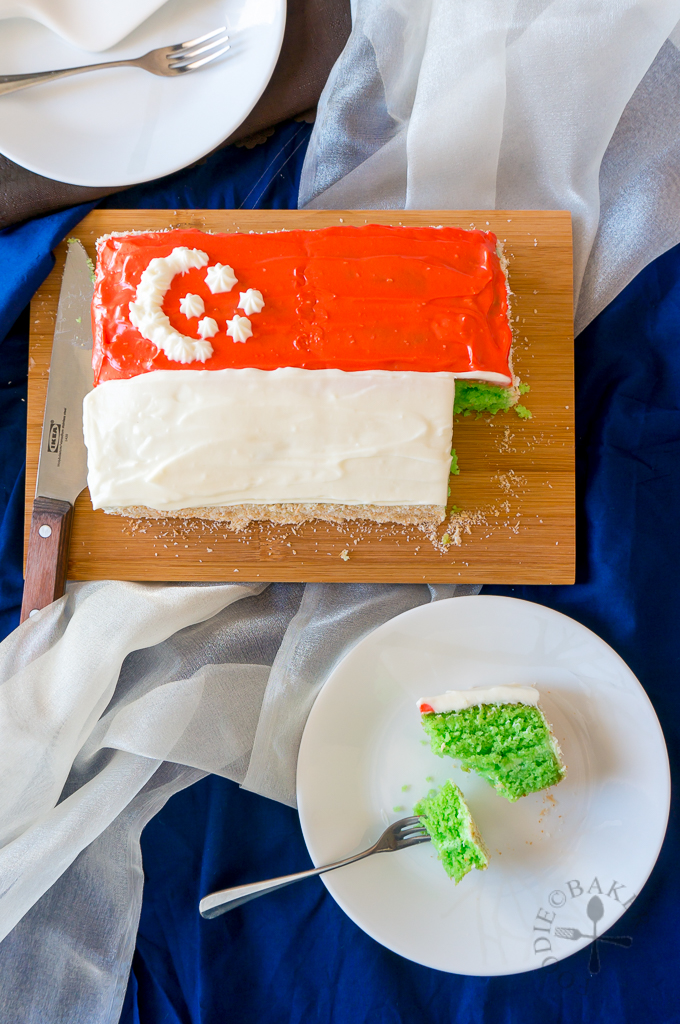 I was born a Malaysian but my parents decided to bring my brother and I out to Singapore to live together when I was 2 years old (my brother was 1) as they felt there are better education and work opportunities here. So to be honest, growing up, I don't see myself as a Malaysian - I sing and recite the national anthem and pledge; I was involved in flag raising ceremonies during school days; almost all of my memories are created here in Singapore (the rest are overseas holidays hehe) and all my best friends are from Singapore.

So, I decided that I would bake a Singapore cake this year as my tiny way of saying thank you. First, I attempted a swiss roll:

Well, dear friends, as you can see, this attempt obviously didn't go very well - the cake didn't roll up nicely and the pattern... ugh.

Reluctantly, I accepted the fact that swiss roll is something I have yet to master so I decided to bake a layer cake instead. I found a coconut cupcake recipe from Lola, and somehow an idea popped inside my head to replace the vanilla with the pandan extract that I bought from Singapore. Pandan and coconut are common Asian ingredients - there are so many food in Singapore that are made with these 2 ingredients (either together or separately) that I don't think I can name them all! So why not combining them in a cake?

I did, and then the rest is history. 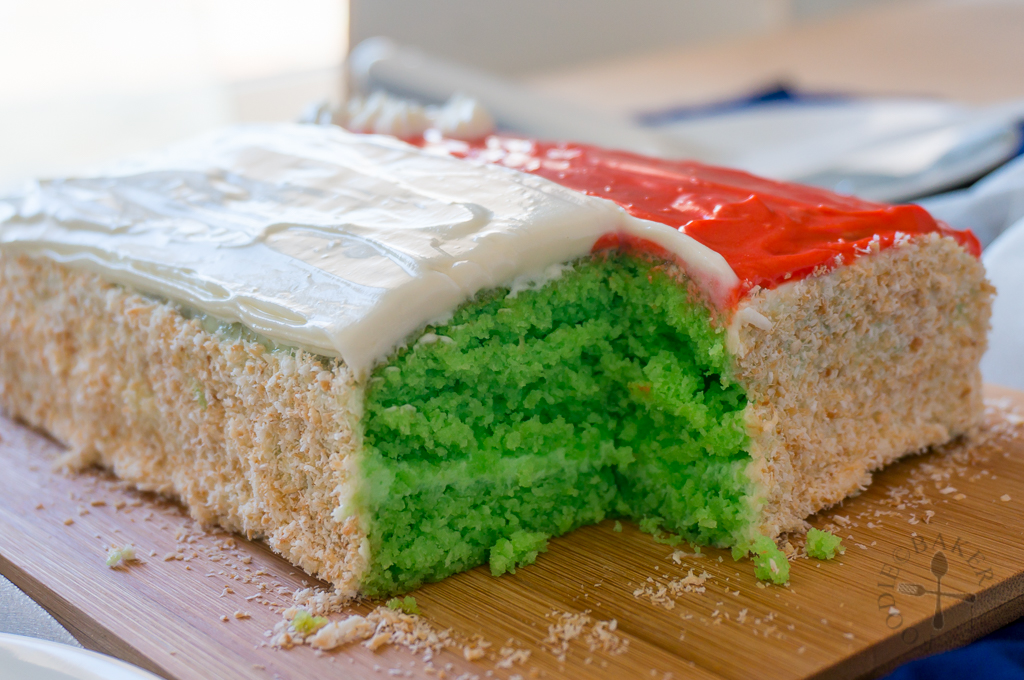 No wait, it's not history - I have to tell you how the cake turns out, right?

Well, I was a little worried at first as the cake batter was quite stiff - the plan will be flushed the drain if the cake turns out dry and hard, but surprisingly the cake was so good that I almost wanted to skip the frosting - it has a tender crumb, surprisingly moist, have a fragrant pandan flavour and is chock-full of coconut flavour - and to think only dried dessicated coconut is used!

Next is the frosting: I needed a white frosting for the bottom of Singapore's flag. Most frostings require vanilla to be added as a flavouring but as I only have vanilla paste on hand, it will be unsightly to have specks of vanilla appearing in the frosting (and on the flag!) Hence I opted for a cream cheese frosting as it is one of my favourite frostings and it is flavourful enough without the need of additional flavouring. I used a recipe found on HowToCookThat which has the addition of sour cream to cut down the sweetness of cream cheese frosting. I still found the frosting a little too sweet for me but luckily the cake was frosted thinly, hence the overall sweetness is still acceptable. 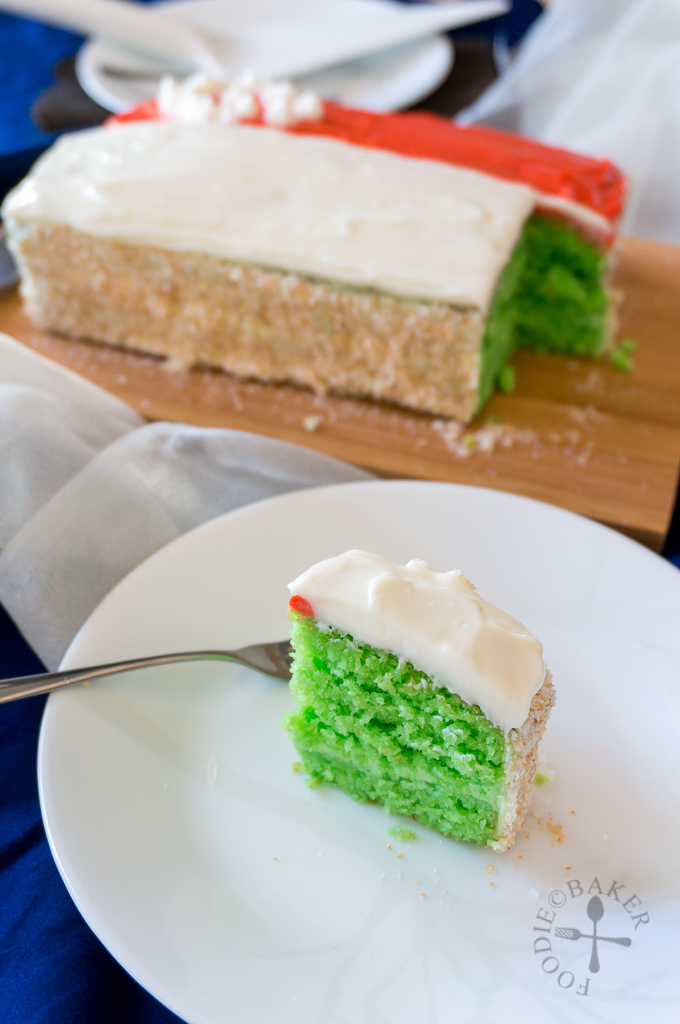 Eating this cake is a delicious joy - the crumb is tender but with every bite you can feel the dessicated coconut giving a unique, slight chewy texture. The cream cheese frosting sadly masked the pandan flavour a little, but overall still goes very well with the cake. If I'm making a normal layered cake, I will simply frost the entire cake with pandan-flavoured cream cheese frosting - so that I will not lose the pandan flavour.

Layered cakes are something I don't make very often because they are often troublesome and tend to have a lot of washing up involved. But I really love the results of layered cakes as they never fail to look stunning and it's just so satisfying seeing the different components come together - and especially when they look good on the camera! (;

Here's how to make this cake! 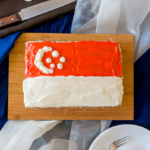