Pho is a popular street food in Vietnam, which is a noodle soup consisting of broth, flat rice noodles, vegetables, herbs and meat. The most common version is beef, but chicken pho is usually offered as well. I cannot remember when was the  first time I tried pho or when I got hooked to this delicious bowl of comfort, but I know I love how I can add different types and amounts of herb into the broth to create a totally unique and for-myself-only pho.

What makes pho so tasty has definitely got to be the broth. The broth is made by simmering bones, meat, charred onion, charred ginger, star anise, cinnamon, cloves, coriander, fennel and fish sauce for hours until the meat is falling apart and all the goodness have been extracted from the bones and spices. I omitted the fennel (none on hand), added a bit of spring onion and used ground coriander (no coriander seeds on hand).

When the broth is simmering, it will smell soooo good that you might think that you have been teleported to Vietnam - okay not really, but I guarantee you that you will not want to open any window and let this wonderful smell escape! The herbs and lime (I had to use lemon) added at the end will also transformed the broth - so don't forget to add them! Though I only had coriander and spring onion on hand, the soup is so extremely tasty that not a single drop remained at the end of our meal!

Due to language barrier, I simply bought a slab of meat that looked like brisket / chuck to me. After going back home to verify what part I've bought, it seemed like I had bought a piece of foreshank back - but some beef part images on other websites state that the part I bought was brisket or chuck... so confusing! Anyway, all of these parts will work for this recipe because they are all suitable for a good simmer. I did not get any flank or other cuts that can be used as the raw beef added just before serving as I bought quite a substantial amount of brisket / chuck / foreshank, but you could get some and slice them yourself or just use shabu-shabu beef.

This is definitely a pho-tastic bowl of noodles that I will love to make again, and I strongly suggest you give them a try too! Here are the step-by-step photos! 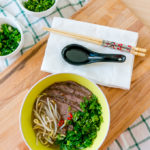 - You can also add shabu-shabu raw beef on top of the rice noodles before pouring the hot soup over. - Adapted from Serious Eats
Tried this recipe?Mention @foodiebaker or tag #foodiebaker!